This morning’s sunrise was pure autumn beauty! The temperature is holding steady at a cool 32F, 34F after sunrise. The sky was devoid of clouds and the humidity was high. I heard last night on the local weather channel that this morning was going to be “clear and chilly” with humidity of around 77%. After yesterday morning’s dark and gloomy sunrise (which I happily stayed at home in my warm bed for!) this meant that there was a good chance for some morning fog for Sunrise 112. I’m beginning to understand how to predict fog at least to a nominal degree. Clear skies after a gloomy day seem to be a good predictor, but it isn’t certain and there are definitely other factors that can create fog as well.

I threw on my wife’s running gloves (I need to get some for myself!), some long insulated running pants, and my thick University of Cincinnati Homecoming 2005 PDT sweatshirt. It was cold! But to be honest, I learned a valuable lesson. With the gloves protecting my hands from the bare metal on my handlebars (wrapping them this winter will be a fun project… still haven’t decided if I’m going to throw on indexed shifters or not) and my hot fresh brewed coffee, I can handle these low-30s autumn mornings. There should be many low-30s winter days ahead of us and as long as the wind doesn’t rip my face off, I’m hoping that there will also be a good amount of Ault Park Winter Sunrise posts. I’ve also put off making the best-of page up to date, a task that I’ve decided would fit perfectly for those winter mornings where I feel like writing but don’t feel like getting frost bite 🙂

There was lots of bird activity this morning and also lots of people activity. Sunrise was at 8:06pm by my clock and with the clear skies the atmosphere was already lighting up in a bright but muted gray color by 7:20am. The high humidity added an interesting twist this morning. The sunrise was quick like I’ve come to expect with the open atmosphere free of clouds, but with the high humidity and the light mist, the sky did not take on a deep saturated navy blue. The sun started off in a late-phase orange color, having spent the deep purple quickly before even cresting over the horizon. There was a lot of that “muted gray” color in the sky which helped to mix up the color pallet from the orange to deep blue gradient that I would have seen if the humidity were lower.

I, for one, can’t wait for day light savings to kick in later this week. Maybe I should go somewhere to celebrate the occasion. It’s funny how things slowly slip by with the currents of time until they take on a different feeling all together and you have to *remember* what the feeling of that thing was just a few months ago. Looking back at my mid-summer sunrise posts, I find it neat to read about how quiet and calm the sunrise rides were. No cars or traffic, no people, just the birds and squirrels and the sunrise. This morning’s 8:06am sunrise had me fighting rush hour traffic just to get across the street! When DST finally ends and we jump back an hour, hopefully I’ll have a few weeks of calmer sunrise rides. The latest that the sunrise will come up until NEXT autumn is around 7:50am sometime in the middle of the winter, so this week will officially be the latest sunrises of the whole project.

I *have* been saving up a special contact for a few months now that I haven’t actually reached out to query. More on that later. Without further ado, Sunrise 112. 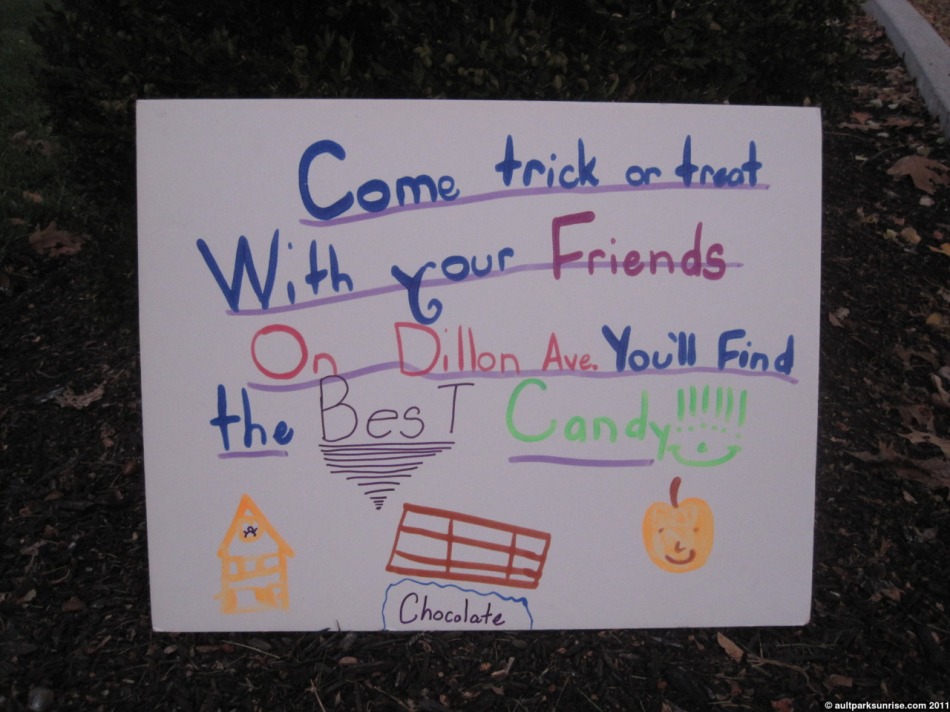 As I climbed up the hill to Ault Park, I passed this left over from last night’s neighborhood trick or treat. I was cracking up to myself at the effort that the house put in to attracting trick or treaters. I don’t blame them, though. Dilon Ave is a cul-de-sac so it’s possible that there would be less volume of kids walking around. It makes sense to advertise!

The wife unit and I sat outside last night with a bucket of candy but we didn’t have as much luck. I kind of wish we had a sign, too! Oh well now we have lots of left over butter fingers.

There was a layer of mist in the air and around the bondaries of the forest, but the park was mostly clear. Upon arriving to Heekin Overlook, I was greeted with a “classic” foggy valley that provided seamless gradient into the atmosphere. The sun was due to show up in about 10 minutes, so I poured myself a coffee and looked out across the foggy valley. 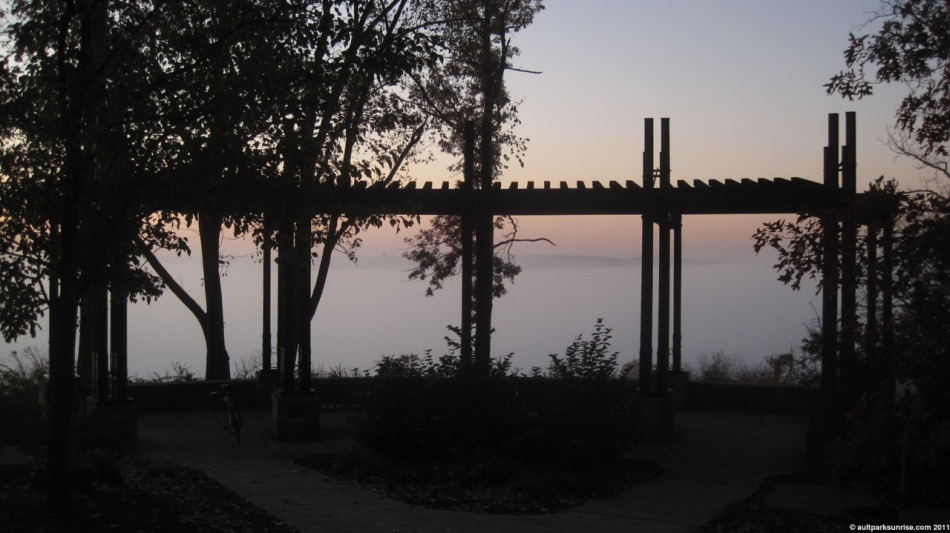 Just before the sun came up there was a bright deep orange/purple halo that illuminated the area just above the horizon. 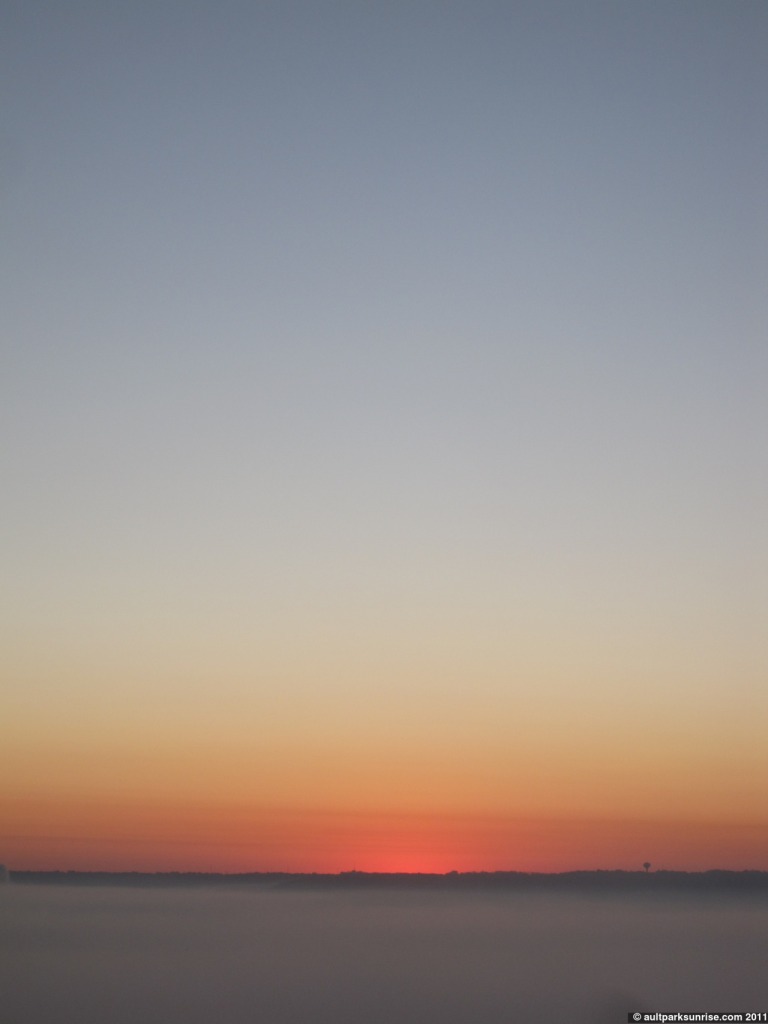 The pictures, of course, don’t do it justice but the 30 seconds before “first light” can be rather intense! 🙂 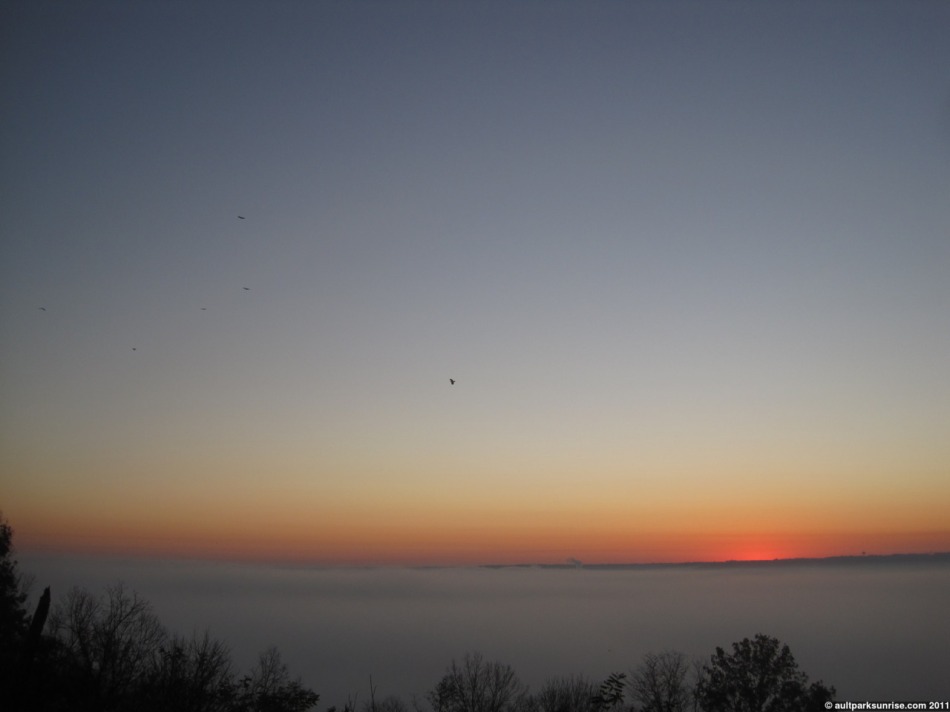 As I was waiting for First Light, several packs of birds flew out from over head. 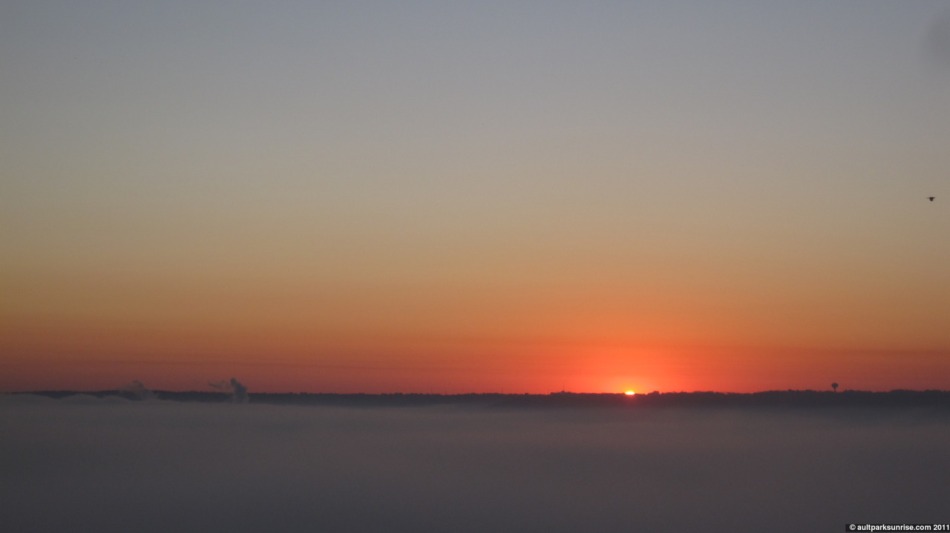 “First Light” with some industrial fog rising up to the left…

A vertical picture showcasing the gradient colors into the navy blue

Sunrise 112, featuring a commuter plane that just took off from Lunken 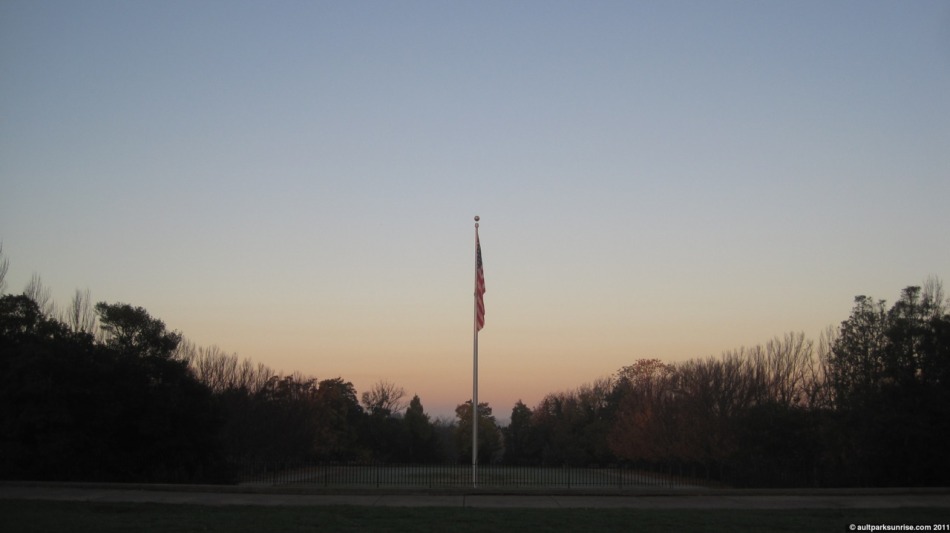 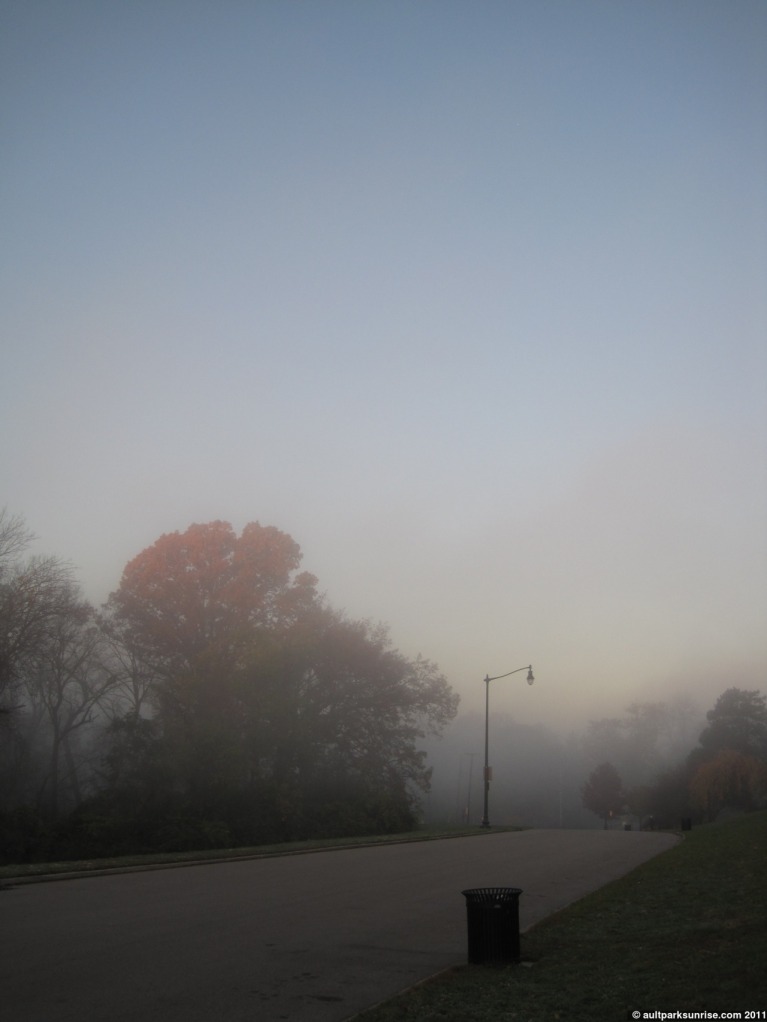 What is always interesting to me is how the sun doesn’t waste any time pushing the fog into the park once it crests over the horizon.