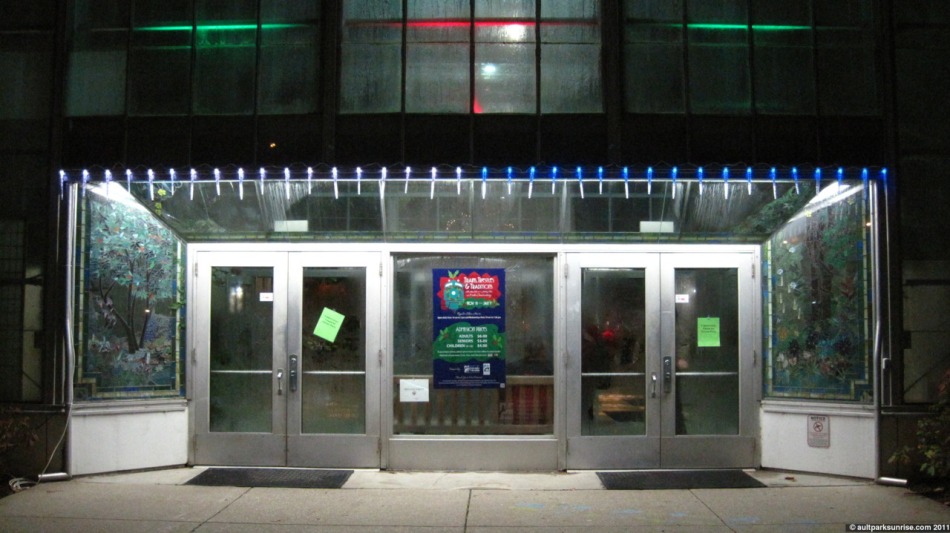 The entrance to the Art Deco Krohn Conservatory at the end of the Holiday Tree Lighting party. Check out the parallel lines, a signature of the style. Also note the humidity dripping from the glass panels. 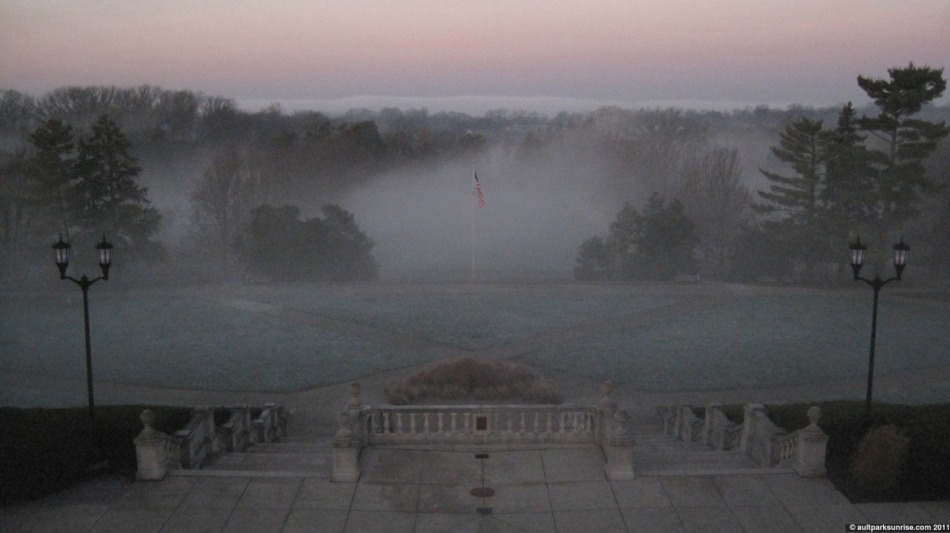 As I climbed up to the top of the pavilion, I realized that I could see the fog layer out across the western sky. This is a new look for the park – fog and ice! 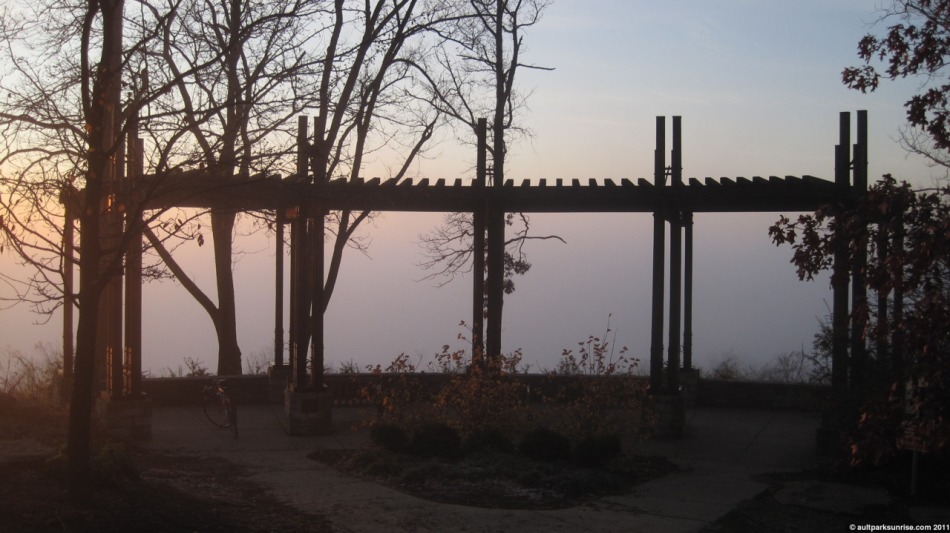 The atmosphere this morning was foggy for the second day in a row. I’m beginning to wonder if we’re close to setting the record if such a thing ever existed. I could see the sunrise’s deep red glow from Mt. Lookout Square, where I stopped by UDF to get a coffee refill, but by the time I climbed up to the park the fog had blown in from from the valley. The fog started to get thick as soon as I entered the park.

The strange thing that really stuck out to me this morning was the bird activity in the park. It was almost as if today was the day that the swarms of birds chose to gather in Ault Park before heading south for the winter. I have no idea of sparrows or crows migrate, but both birds were present in outstanding numbers this morning, filling up the sky and making a whole ruckus of noise! I even have a video of the “Murder of Crows”. There were at least 100 (I took a video) crows high in the trees this morning and their silhouettes were easy to find against the bright white background and naked branches. I’ve seen a handful at a time of these giant birds at the forest’s edge looking out over the valley, but this morning the murder moved together in a loud, squaking, organized group. I could hear them even as they moved deep into the forest even though they were hidden by the fog.

Last night the wife and I visited Krohn Conservatory in Mt. Adam’s Eden Park for their annual tree lighting ceremony. It was a really great time and there was excellent food and drinks. If you’re local to Cincinnati I highly recommend joining the Cincinnati Parks volunteer program because you get to hang out with some neat people and get invited to events like this at the Krohn :). The Krohn has a neat holiday display this year. A group came in and created a miniature train display that highlights several local Cincinnati landmarks as well as a few international ones. The trains glide around the fantasy landscape that is filled with the temporary holiday flowers and plants as well as the permanent citrus trees. The Krohn Conservatory is such a great building and we’re lucky to have it!

I was happy to see the Mt. Adams Incline represented in the train display @ Krohn Conservatory!

The giant pine lit @ Krohn. If you love plants like I do, be sure to pay the Krohn as many visits as you can! Especially at NIGHT during the winter. When you walk into the dark humid tropic room as ice crystals form on the green house panels, you feel like you’ve entered another world.

The entrance to the Art Deco Krohn Conservatory. Check out the parallel lines, a signature of the style. 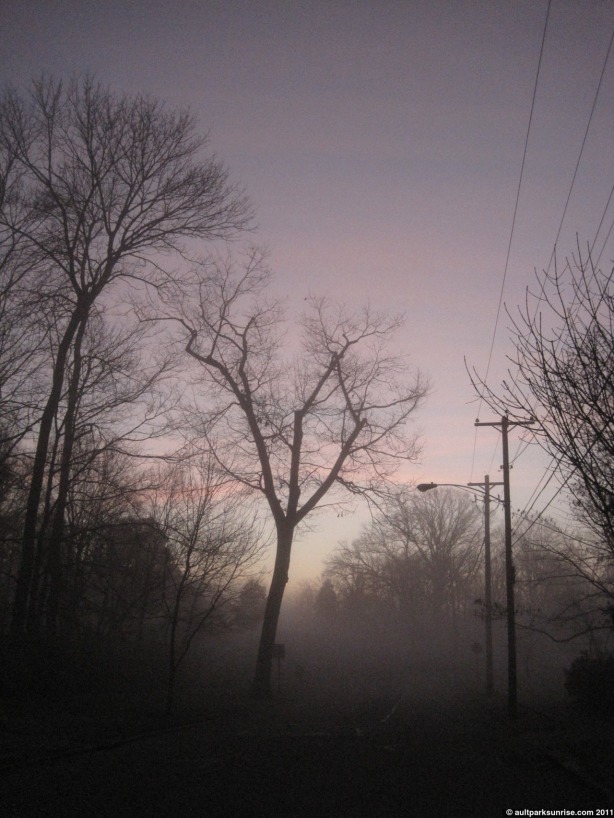 As I entered the park, it was obvious that the sunrise was going to be a foggy one.

If you’re on the front page, please click to continue. 17 pictures total for this morning, including the video of those crazy crows… END_OF_DOCUMENT_TOKEN_TO_BE_REPLACED 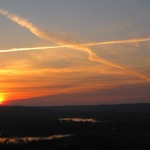 This morning was absolutely beautiful. It was everything I could have hoped for after these last two days of thunder storms, and more :). The atmosphere was crisp and clear, with a hazy cloud formation just above the horizon. The clouds provided a beautiful reflective orange pattern and there was a “slicing” effect caused by one of the lower cloud banks (I need more words for clouds…). I guess you could say today was a “mustache kinda morning” (thanks Mike!). Always remember – shaving your beard in preparation for summer is always an opportunity to wear a mustache (even if only for a single day)! Earlier this week I had a “mustache monday”; fortunately I only ran into a handful of people. Moving on…

This is my theme song for the day. Don’t judge!

The pre-dawn atmosphere was a pinkish color, no doubt influenced by the low cloud cover.

When the sun actually came up, you could just barely see it through the clouds. It was so subtle and majestic. More pictures after the jump END_OF_DOCUMENT_TOKEN_TO_BE_REPLACED