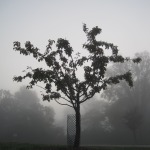 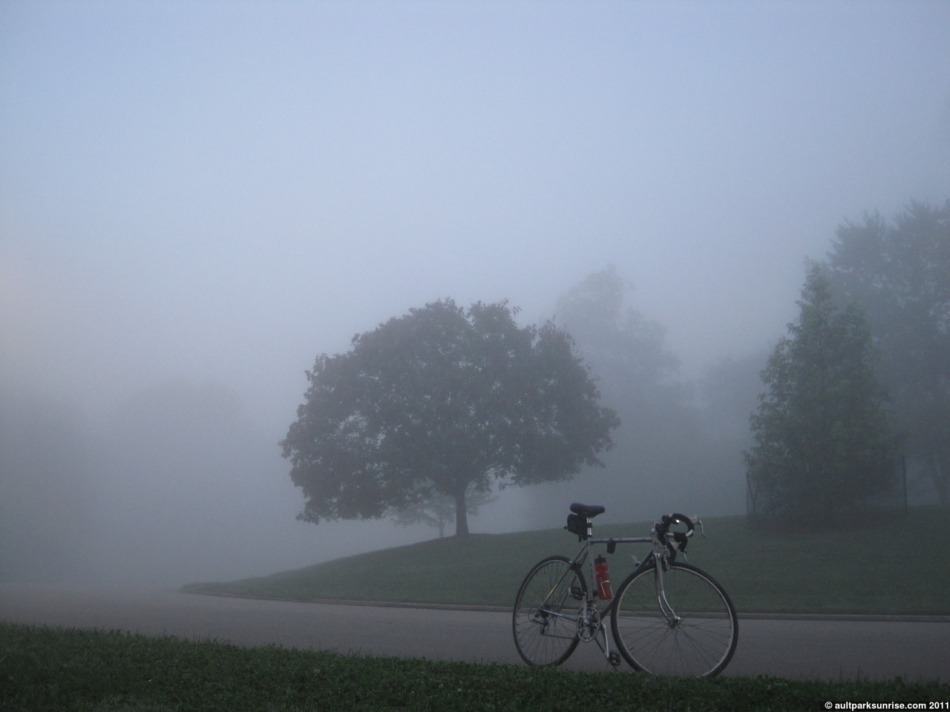 The trusty old ’77 fuji hangin’ out in the fog.

One of my favorite places to take the Fuji’s portrait.

Arachnophobes should stay away from bushes in the fog.

The Cincinnati Observatory against a psuedo-sunrise.

Last night before calling it a night, I took a peek from our patio into the night sky. I realized that the atmosphere had cleared up and I could see the stars. I’ll admit it, I was excited to wake up early to a cool, crisp, fall sunrise in a clear and open sky.

However, when I woke up this morning I was treated to an even bigger surprise! This morning was one of the rare mornings that happen once every few months (and hopefully more often this fall with all this rain!) where the thick fog from the valley overflows and spills into the hills of Mt. Lookout. The fog was lightly patched around the square in Mt. Lookout, and even sparse on my ride through the neighborhood to Ault Park, but once I hit the park boundaries it was like riding into a hazy wonderland. I didn’t get the clear morning sunrise that I had expected, but the quiet and muffled morning in the fog was worth the exchange!

I was literally like a kid in a candy shop. I wanted to see Alms Park, Lunken, Armleder Park, and all the residential no outlets that I’ve come to appreciate. But alas, time enough there was not.

The descriptions, unfortunately will be brief this morning. I’m on my way out the door to check out my first Little Brown Jug horse race up in Delaware, Ohio. 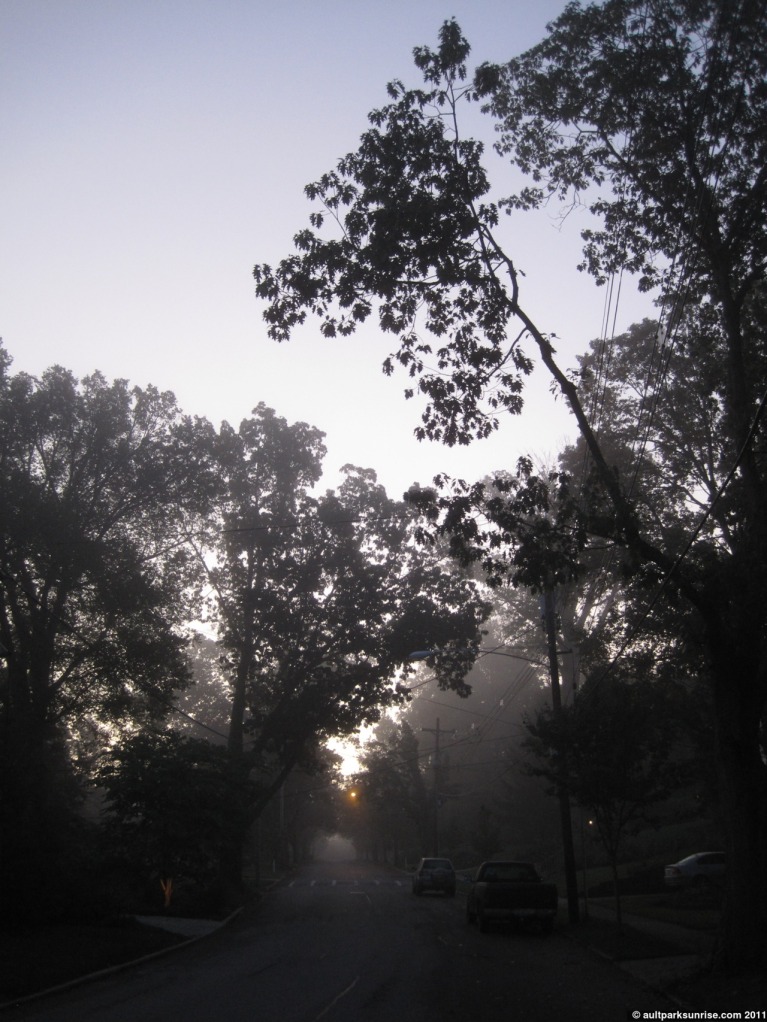 Coming out of a thick patch on the way to the park. Up ahead it is foggy. At the top of this hill is Ault Park. 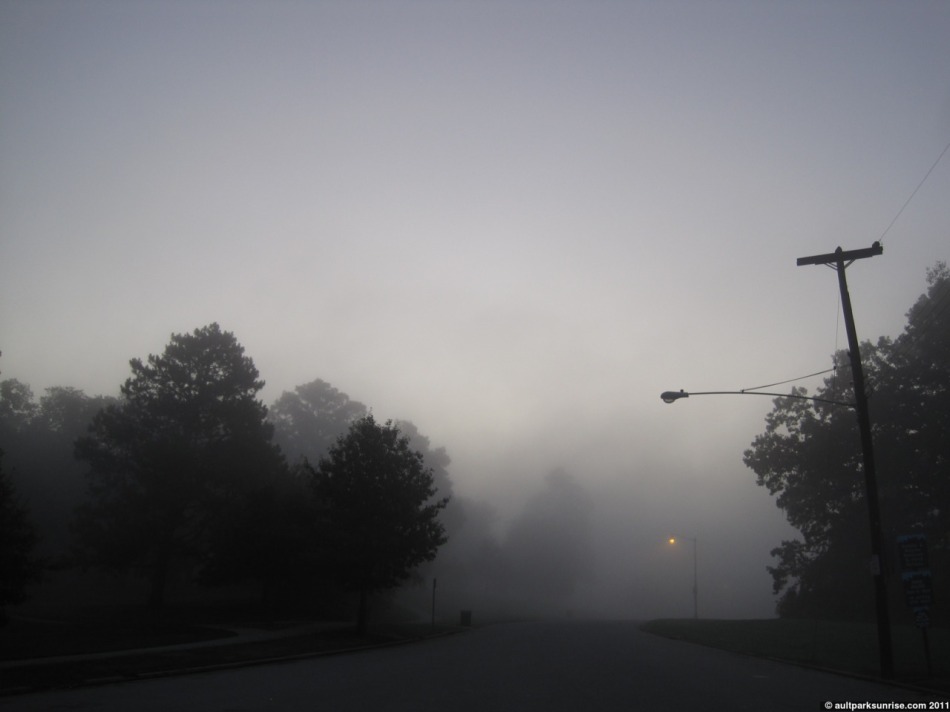 The entrance to Ault Park

As I enter the park, I can “hear” the fog around me as all ambient sounds beyond 50 feet away become muffled. 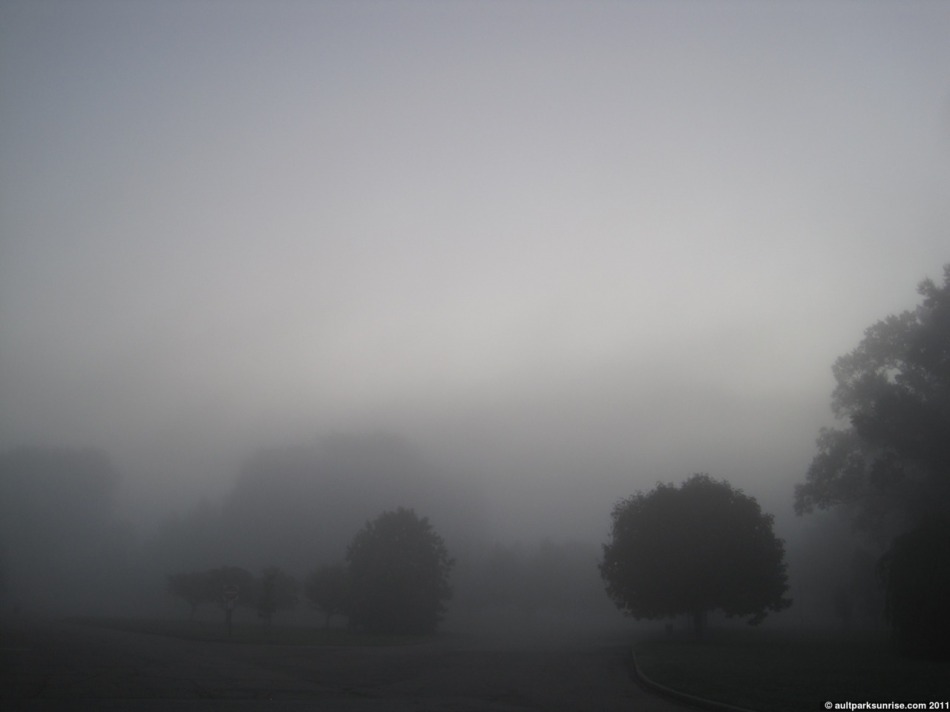 It’s even thicker up near the pavilion where the fog is still literally pouring in from the valley just 200 yards away.

Knowing that there will be no sunrise, I take a stroll through the quiet garden.

For the rest of the pictures, about 35 more, click to continue! END_OF_DOCUMENT_TOKEN_TO_BE_REPLACED

A “cosmo” pointing up toward the sky.

This morning I felt it was definitely a time to recollect and enjoy a cool morning summer in the park. The last two mornings I skipped the sunrise. I tell myself it was mostly due to overcast conditions but in reality I think there are several different reasons. I almost feel as though these late sunrises, happening at 7:05am, are no longer a “challenge”! The 6:15am sunrises, which came up before rush hour and when the city was still asleep, had more of an air of secrecy to them. I’m either going to have to find a new challenge (like getting to the park by a half hour before sunrise, and then leaving as soon as the sun crests) or search for more motivation. Time will tell! It’s just depressing to me how deep into the morning my routine is taking me if I wish to take my time at the overlook or in the gardens. That’s life, though, I suppose.

The atmosphere this morning was cloudy so I took the time to check out the flower gardens. By this time, late into the summer, the bushes and flowers have grown up healthy and lush. There is an opening that reveals a grassy aisle into the center of the flower garden that is in the center lawn. The last time I really explored this area, the ground was bare and I was left wondering “hmm, what’s going to grow here?”. The black-eyed-susans, cosmos, and other flowers are now towering over my head and full of beetles, bumblebees, spiders, and ladybugs. I was surprised to find how thick the isolation felt once I walked into the flower garden. On several occasions, while I was stooped in observation taking pictures of the flowers, a jogger would glide by only a few feet from me but on the other side of the flower wall. It reminded me of just how private a forest or meadow can become during the late summer months. I need some time to rebalance and sunrise in the garden was a perfect fit :). I got a bit carried away with the pictures, mostly just having fun with the color and finding all the insect life hidden under the pedals.

This is actually a deer in the forest behind our place. I tried feeding her carrots, but she was only interested in green foliage. Next time I’ll bring broccoli.

The sunrise was boring! Off to the garden.

These first few are darker, I was lucky to get any kind of macro focus. A deep orange flower that I think is a “cosmo”

The centerpiece hidden inside the flower garden.

For the rest of the pictures of flowers and insects, click to continue if you’re on the front page: END_OF_DOCUMENT_TOKEN_TO_BE_REPLACED

When I left our apartment this morning, the first thing that hit me was how the “thunderstorm” that was expected last night at 2am never showed up. The air was still thick and wet, something I hoped would go away as the expected front cleaned out the humidity this morning. There was a bit of a haze, but the atmosphere was clear of clouds for the most part giving the air a vibrant feel to it. I wouldn’t call it a fog because you couldn’t see any clouds manifest themselves from the overlook, but the entire valley (and the sun) had a visibility that seemed to stop abruptly about 4 miles away.

The air this morning was warm and sweet, not to mention wet. It reminded me in general of how it feels on a warm sticky summer morning, but it wasn’t quite hot enough to be a nuisance. It was, honestly, just about perfect. My morning routine was finally complete, because I finally was able to make coffee after stopping at Trader Joe’s on the way home from work last night, so I enjoyed my first couple of cups as I waited for the orange accent to become a delayed hazy sunrise. 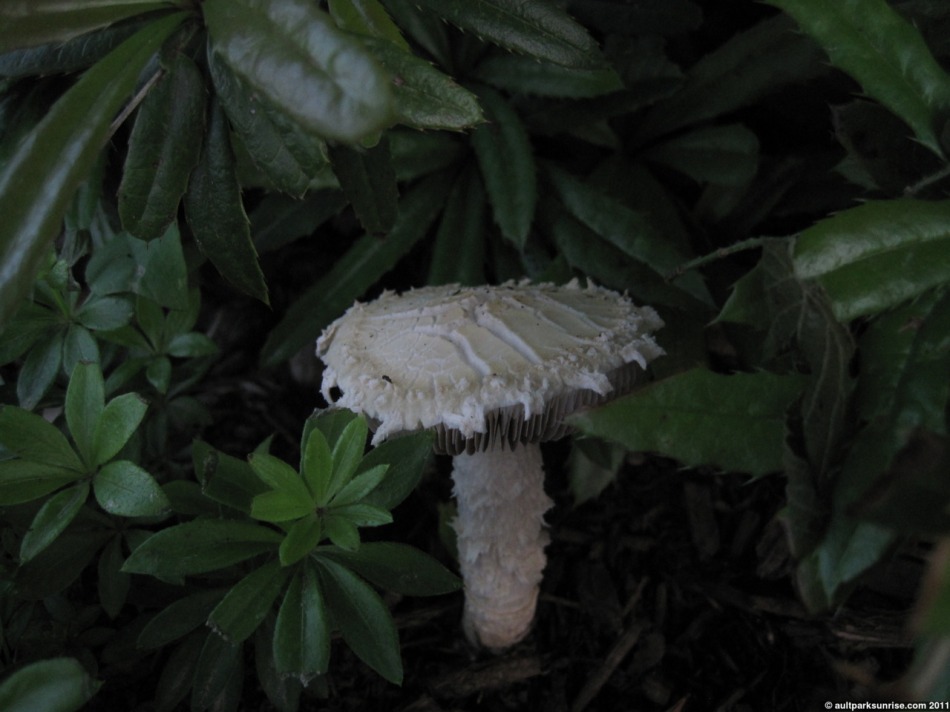 In the meantime I meandered over to the underside of the overlook and I found some fresh mushrooms that have recently come to life. They had that perfectly soft white foamy appearance to them so of course I had to take a picture to document them. In fact, the mushrooms I took pictures of Sunday night up in Alms Park are already starting to shrivel and age just two days later. If you’re on the front page, please click to continue, there are like 40 pictures in this post! –> END_OF_DOCUMENT_TOKEN_TO_BE_REPLACED