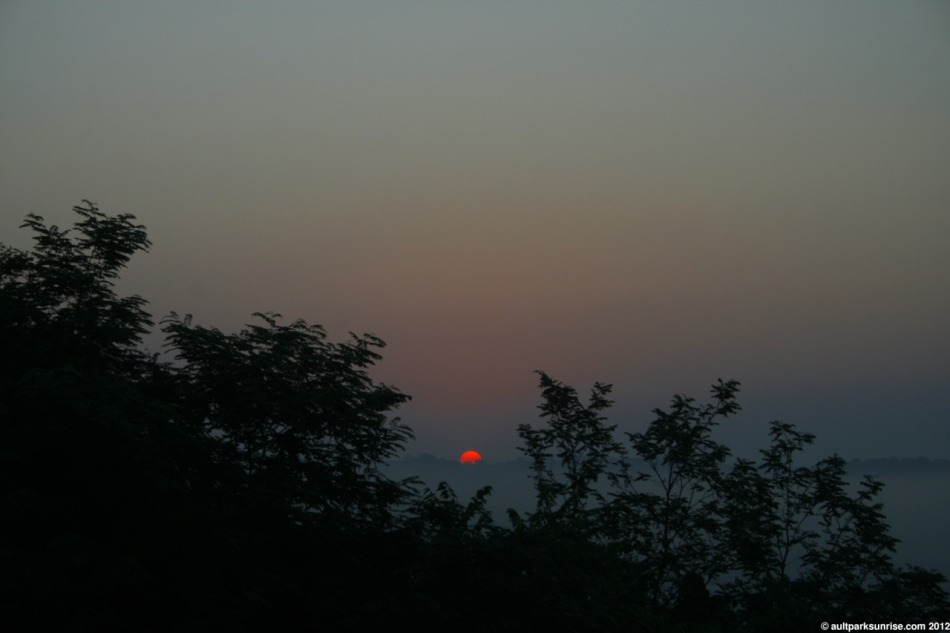 First Light! The sun slowly rose up in the distance, a blood red across the eastern ridge line.

The eastern hills are becoming engulfed by the floating fog bank.

MMy phone rang at 5:30am, sharp. My brother and I had made plans to check out the sunrise this morning and I had already slept through my 4:45am alarm. Once I realized that I didn’t oversleep by too much, I set off towards Clifton to pick him up and set up shop at Eden Park. We were forecast this morning to have 7% cloud cover with 90% humidity so I knew that if we were lucky, we wouldn’t miss much as long as we could get to the park just before sunrise. With such a high humidity, the odds of seeing a twilight color show were slim to none.

I was hoping to take some sunrise silhouette pictures and asked my brother if he’d mind being the subject. He is well known for his large poof of hair and it also happens that he is cutting it all off in June. I knew that if I was going to make some silhouettes using him as the subject, we might as well do it before he gets his iconic afro trimmed back. I’m impressed – he even woke up a half hour early to pick it out!

We ended up making our way to Eden Park for several reasons. First, it is close to Clifton (where my brother lives). Second, I am long overdue for a visit to Eden Park, considering that my last (and only) sunrise at Eden Park was back in the autumn for Sunrise 115. Third, the overlook at Eden Park by the Twin Lakes is one of the absolute perfect locations for clear open sky views of the eastern sky. In my mind I was imagining colorful gradient atmospheres in the backdrop, but once again I found myself being caught up in a mindset that is months out of date! For the crisp, cool and dry sunrises of autumn, when the sky starts to light up an hour before sunrise, there are many shades of pinks, purples, yellows, oranges, and blues that fade to and from across the atmosphere in preparation for First Light. That’s what I was expecting, but of course today we ended up at the park during one of the most humid sunrises of the spring so far.

To give you an idea of what I mean, check out this comparison photo I whipped together. This is a photo of the same tree in Eden Park, taken during two sunrises 6 months apart. The only difference is the season in which they’re taken. The autumn photo was taken almost a full hour before sunrise when the sky is starting to light up in the clear atmosphere.

In the end, it still made for some great silhouette pictures, although they are of a different variety from what I expected. The lighting didn’t become appropriate until about 20 minutes after sunrise, a phenomenon that is only possible with a humid atmosphere. We had some fun with borrowed camera and checked out the reservoir ruins down in the lower section of Eden Park under Mirror Lake. Interestingly enough, I came home with a bottle of Maker’s Mark whiskey… funny story.

When we arrived in the park at 5:45am, there was only two other people in the park. The young couple were enjoying a nightcap and the view after what I can only imagine was a fun and exhausting Saturday night on the town Cincinnati. While my brother and I were starting our day with the sunrise, these two friendly people were ending theirs with the same ritual. The gentleman, who was quite friendly, asked if we wanted to help him out with his excessive amount of drinks that he was carting around after the night of partying. He apparently didn’t drink liqueur, and yet he found himself with a trunk full of top shelf whiskey, vodka, and mixers. Curiosity got the best of us (and besides, with my much taller younger brother with me, my cautious “it’s a trap!” senses didn’t trip). As it turned out he wasn’t joking, and he offered us a bottle of Crown Royal and Maker’s Mark to take home with us. I’m sure his motive wasn’t entirely altruistic as his lady friend was quite smitten at the generosity shown by our spirit handler. Who was I to turn him down? Thanks again Brandon, whoever you are. This next maker’s on the rocks is for you!

Speaking of generosity, I’d like to thank my friend J for letting me borrow his camera for the weekend. My wife is out of town visiting family while I’m stuck home working so I couldn’t use her phone for today’s post. J let me borrow his Canon SLR, and I have to say it’s quite a machine. I have no idea how to use it properly but it was difficult to take a bad picture, that’s for sure. Thanks again J!

My favorite picture of the morning. My brother watches as two ducks come in for landing at Eden Park’s twin lakes behind us. We see the eastern “Bend in the River” in the background, with a sloping Kentucky hill on the right and Ohio’s Mt. Tusculum (I think) to the left.

We arrived in the park with cautious anticipation, given that we were about 45 minutes behind schedule. Fortunately for us, the humid sunrise arrived late. About 5 minutes before sunrise the sky still hadn’t taken on much color. 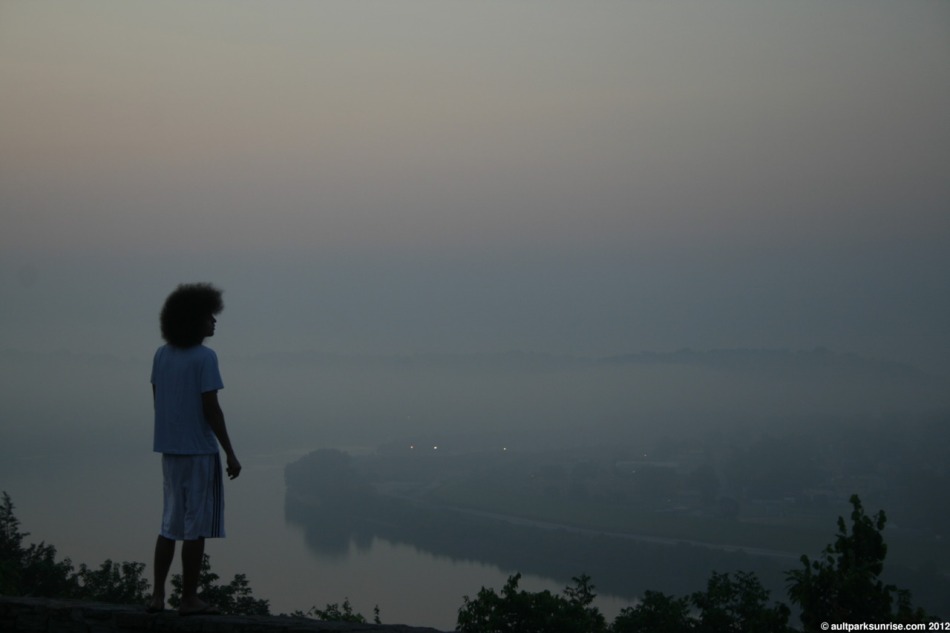 My brother makes his first appearance, looking out across the Ohio River into the mist. Up until now all of my silhouette pictures have been most successful before sunrise on clear days. We can tell from this picture, however, that there simply isn’t enough light yet to block out the foreground in blackness. Each sunrise presents its own unique challenges. This humid sunrise was no exception and it turned out that the best lighting would come about 20 minutes after sunrise. Look at that hair! Thanks again for being a good sport, broseph.

On these damp, wet, 90%+ humidity mornings the sun just seems to hang in the air. You can stare right at it and it doesn’t hurt. There is no pre-sunrise halo, no opening display. The moisture in the atmosphere blocks all but the more direct of sunlight. I really like this camera’s sensor because on my old canon point-and-shoot I could never get a deep red color on a humid sunrise. It feels much more analogous to a film camera.

Within a few minutes, the sun rose up through the misty layer in the lower atmosphere and basked the park in early morning sunlight. Here we can see the fog bank across the bend in the river beginning to take shape. As the air warmed up, the fog became thicker. I imagine Alms Park would have been a foggy wonderland by this point.

If you’re on the front page, please click to continue! 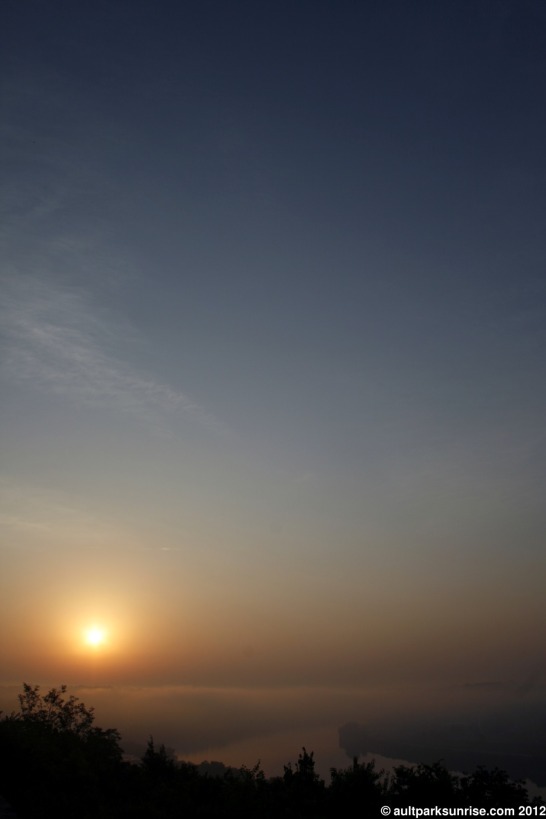 A vertical shot looking up the Ohio River under a gradient morning sky. 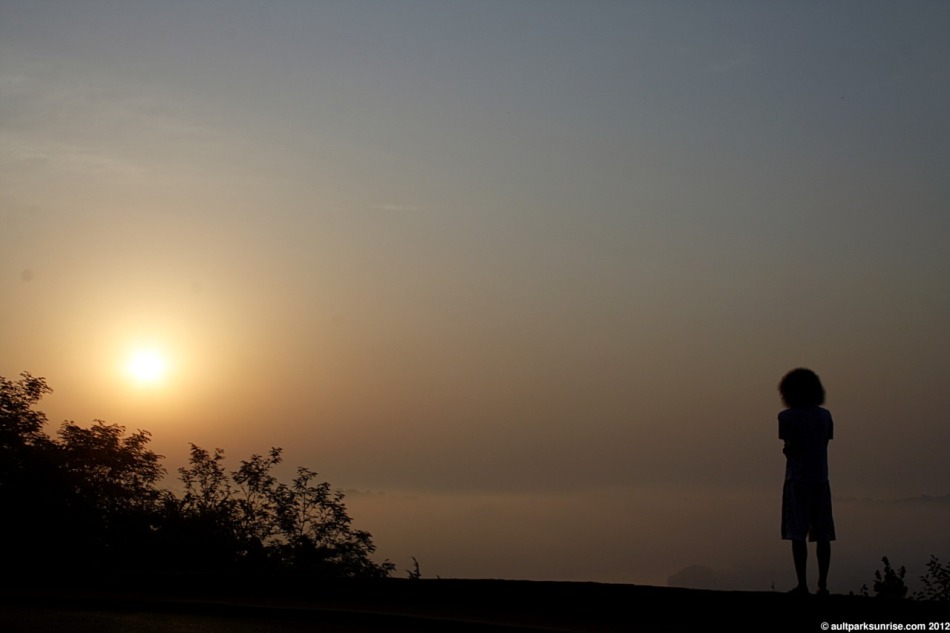 My bro looks out across the river.

The moment after that akward question: “what should I be doing?”. He chose to walk like an Egyptian. Hah.

Looking out into the void. I love that the Kentucky ridge lines pops out just above the fog. 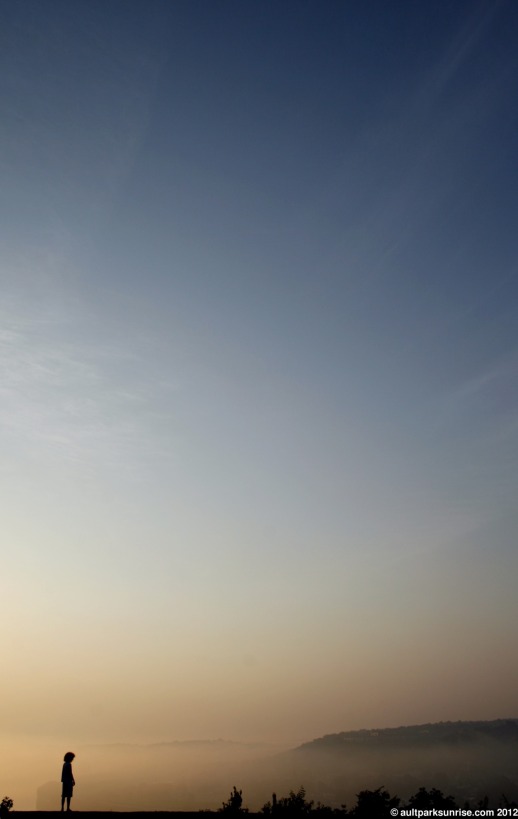 A beautiful open sky above a misty Ohio River valley in Cincinnati, Ohio.

What would a morning post be without a tree silhouette? This tree alone stands against the horizon. I’ve seen it as the subject for several Cincinnati photographs outside of this project.

What’s a morning in the park without an old fashioned seething, roaring mess of an ant swarm? 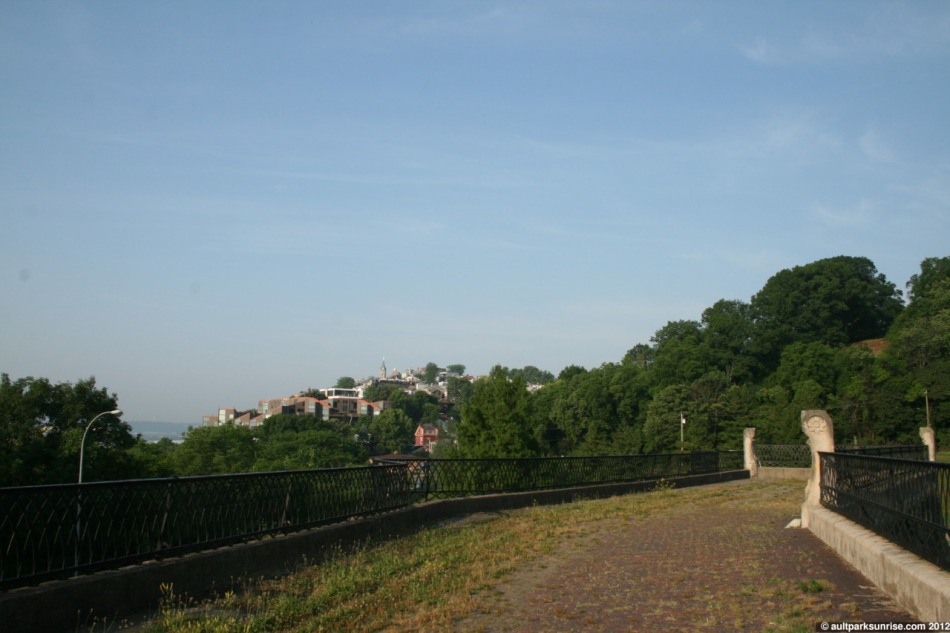 One of my favorite views of the hillside neighborhood of Mt. Adams is from atop the ruins of the reservoir wall in Eden Park. This huge wall used to be part of the foundation to a giant water reservoir that powered the water system of the city in the late 1800s. Now it’s just fun to walk across and marvel at the strength and worksmanship of the huge stone structure. The reason I like this view of Mt. Adams so much is it feels very “Not Ohio”. Check out some more pictures of the reservoir from the autumn classic: Sunrise 115

Thanks for reading. Keep an eye out this week for some postcards, I’m finishing them up sometime soon.

This entry was posted on May 27, 2012 by Ault Park Sunrise. It was filed under cincinnati, sunrise, thick haze and was tagged with cincinnati, eden park, foggy, silhouettes, sunrise.