Believe it or not, this is a GREEN magnolia blossom. I’ve never heard of such a thing! I may be mistaken, however, because I can’t find many references to a “green” magnolia on the internet. I’ll check back in at a later date to confirm. 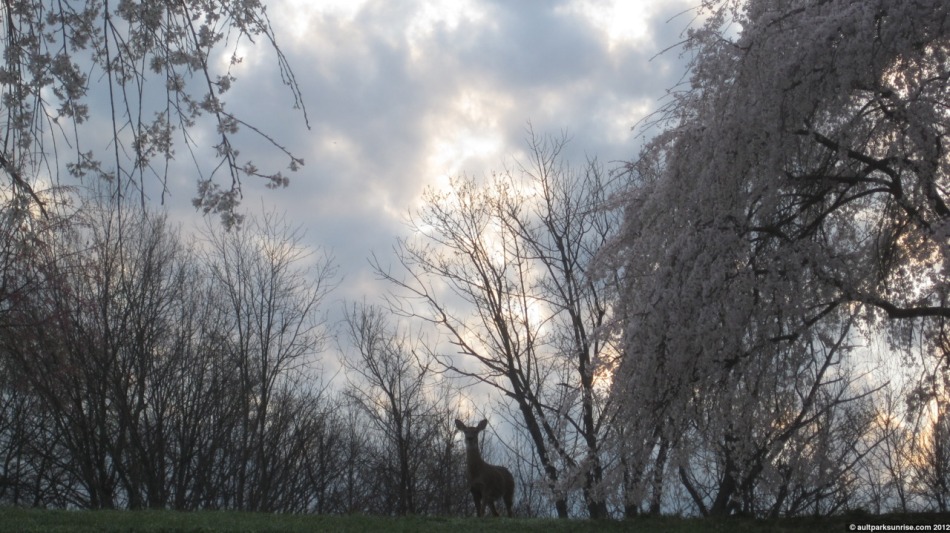 In the weeping cherry grove off of Observatory Rd, a curious young female doe ponders my neon green t-shirt.

(Check out the sister post that hit the news stands about half an hour ago: Sunrise 154)

I’ll admit, I was pretty darned excited about the sunrise this morning. The atmosphere had a rich mix of cloud species with an open atmosphere behind it. It had all the pieces needed for a truly unique and majestic sunrise. In the end, it was a pretty neat sunrise but none of the early magentas, pinks, and purples made a very strong appearance. There was a thick low lying cloud bank that blocked most of the early rays of light before they could penetrate into the upper atmosphere above Ault Park.

Now that I know the secret behind Twilight Sunrises, however, I’m really looking forward to this spring. I mean just look at all these clouds!

As I arrived in the park, about a half hour before sunrise, the lower horizon was showing a deep red color. I was hoping it would fade into the upper atmosphere, but alas it remained confined to the lower horizon. 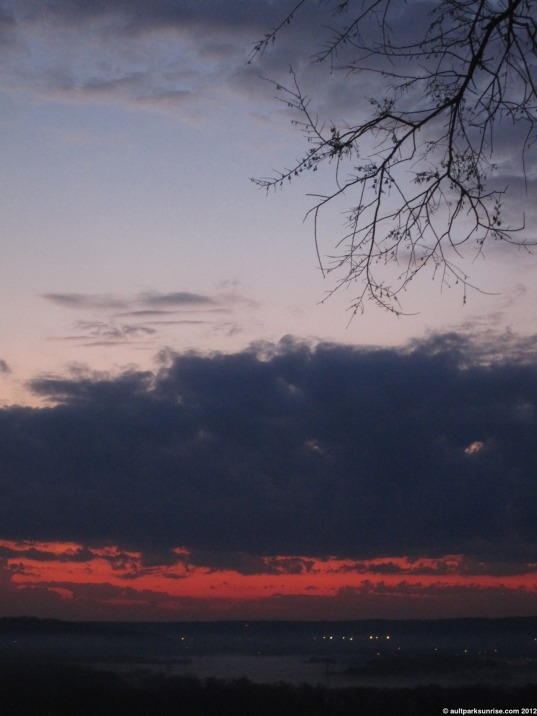 It did make for an interesting show, however. The sky stayed mostly the same for about half an hour until the backdrop suddenly lit up in a teal blue color as the sun rose behind the clouds.

The upper atmosphere made for a nice bright backdrop to the lower layers of clouds.

In the distance, we see a forest island in the midst of a river-of-fog.

Lots of cloud action in the sky this morning… such a perfect opportunity for a breathtaking sunrise. The stars did not align but it makes that rare magenta sunrise that much more beautiful. Still… I can’t really complain. This morning’s sunrise was beautiful in its own right.

A plane takes off against the dramatic sunrise sky.

After the sunrise, I swung by the pavilion to check on the sun’s location relative to the alignment of the building. I was afraid that maybe I’d missed the “perfectly aligned sunrise” sometime this weekend. I was relieved to find that the sunrise isn’t *quite* aligned, yet. It still has one or maybe two days to go… which means that my theory may prove to be true after all! I’ve been following the path of the sunrise relative to the pavilion for several weeks now. You see, the entire park is symmetrical with the garden layouts and walkways. The entire symmetrical axis aligns itself relative to this pavilion… so it goes to show that if the pavilion itself is aligned to some celestial event, that makes the entire park aligned as well!

It makes perfect sense… I mean just looking around the park this morning it was obvious that the gardens and the park itself is absolutely exploding in the trappings of spring. I would like to think that it is no mistake that over half of the trees in the gardens appear to be healthy mix of the blooming variety. Pears, cherries, magnolias, and I’m sure many others.

Could it be, then, that Ault Park is actually a living tribute to the miracle of spring? Suddenly the evidence is all around me. The pavilion alignment with its symmetrical park design, the several groves of weeping cherry trees along Observatory park, the myriad of blooming trees scattered throughout the garden and the handful of magnolia trees… not to mention the brand new cherry grove that was planted to mark the 100 year anniversary of the park.

It makes me happy to the core to find out that it is very likely that the pavilion, and hence the entire park, is aligned with the sunrise of the first day of spring. I believe that the ancient woodland (& others) mound building cultures (Hopewell, Ft. Ancient & Woodland) that lived in this valley for hundreds, if not thousands, of years would find comfort in knowing that we haven’t completely lost our bearings relative to our relationship with the celestial wonders.

I’ll be sure to make it of the utmost priority to get to the park for the next few sunrises to verify that my theory is correct. Stay tuned!

Just two weeks ago these cherry trees were barren. It’s amazing how quickly they bloom. Here’s a shot of the left cherry tree from a mere three weeks ago, when the chill of winter was present and snow had recently fallen:

For the rest of the pictures, including some of the weeping cherry grove, please click to continue if you’re on the front page! END_OF_DOCUMENT_TOKEN_TO_BE_REPLACED