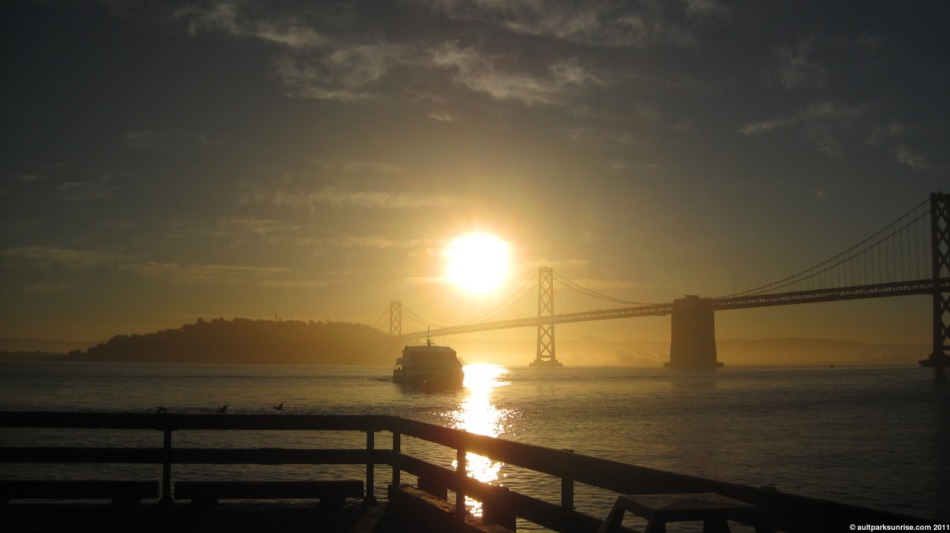 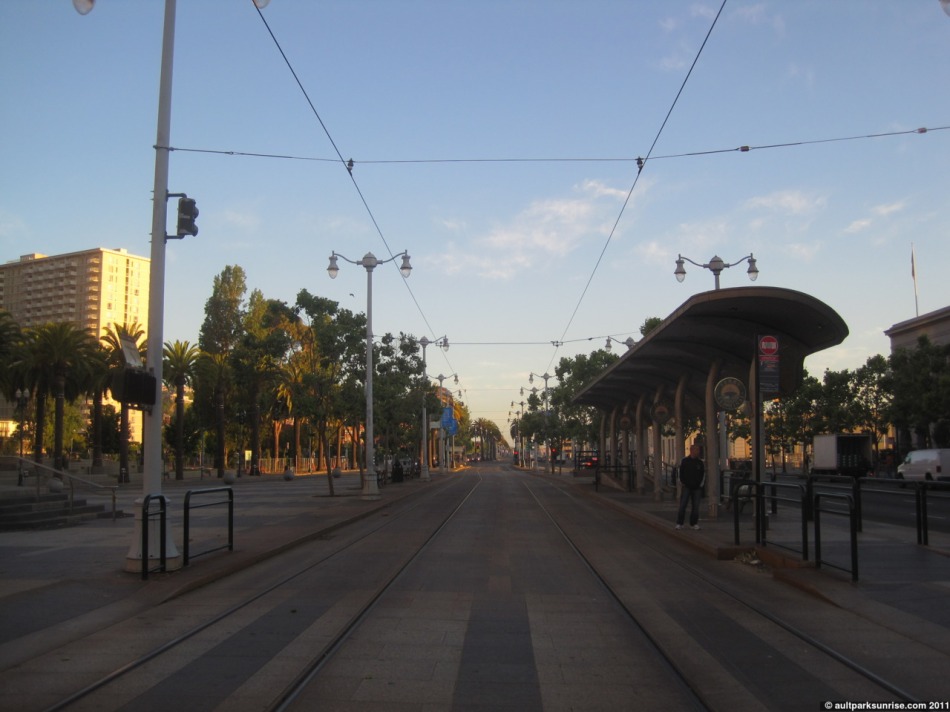 The rail lines along the bay. 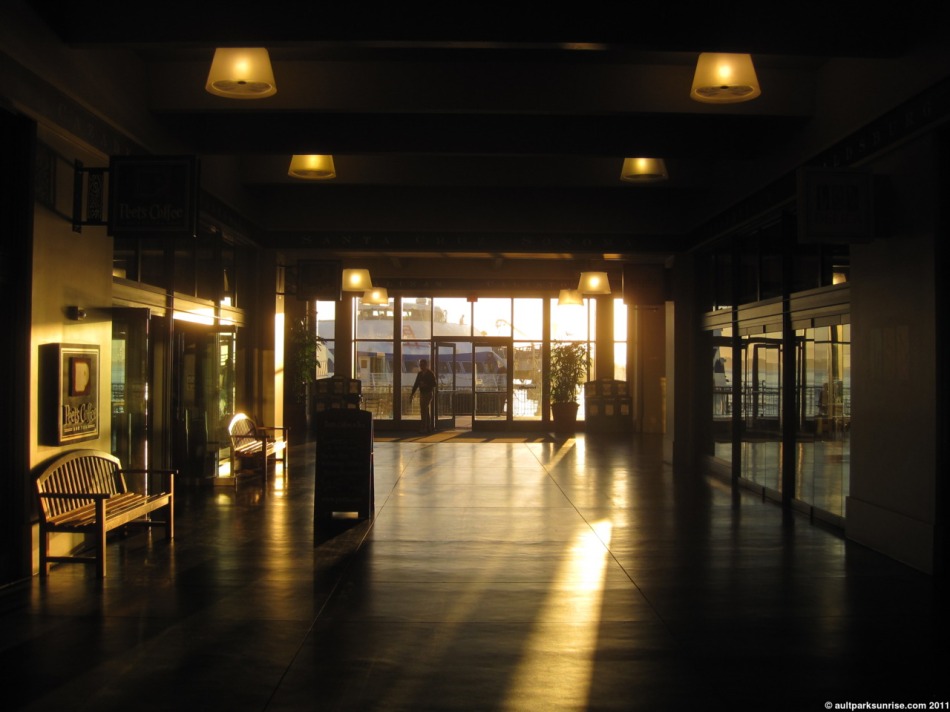 Inside the Ferry Building, heading out to the water

I’m experiencing a bit of withdraw from not taking pictures of the sunrise for three days! We’re out skipping about the West Coast right now so my internal clock has been trying valiantly to get re-adjusted. I tried to get up early yesterday to catch the West Coast Sunrise but my jet-lag caused me to sleep right through the alarm.

View from atop our hotel

We’re staying in a neighborhood in San Francisco called Nob Hill. This morning my alarm didn’t go off correctly (I think I actually disabled the alarm with my face because I slept with my phone under my pillow) so I woke up right at sunrise (5:45am local time). In San Francisco (and any big dense city), as a local girl told us: “We don’t have yards, we have roofs”. There is roof access on the small 4-story bed and breakfast that we’re staying in so I headed up to the top of the building to see what the sunrise looked like. It was indeed a pretty sunrise, but unfortunately the taller buildings close to the bay eclipsed the direct view of the sun. Not satisfied with a simple silhouette, I decided to venture out in to the city by myself to see what I could find. 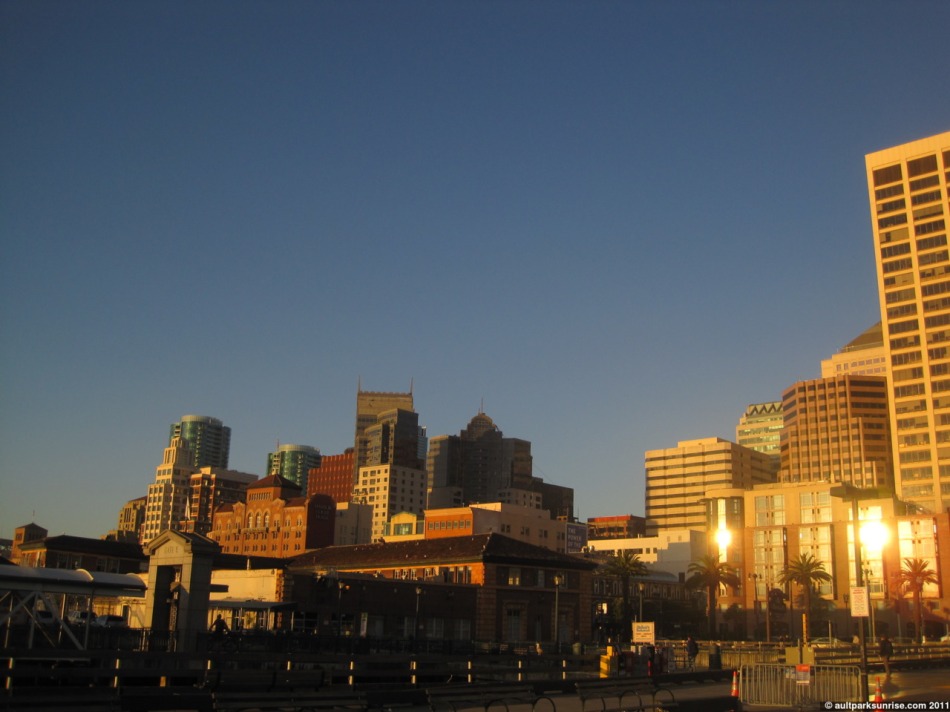 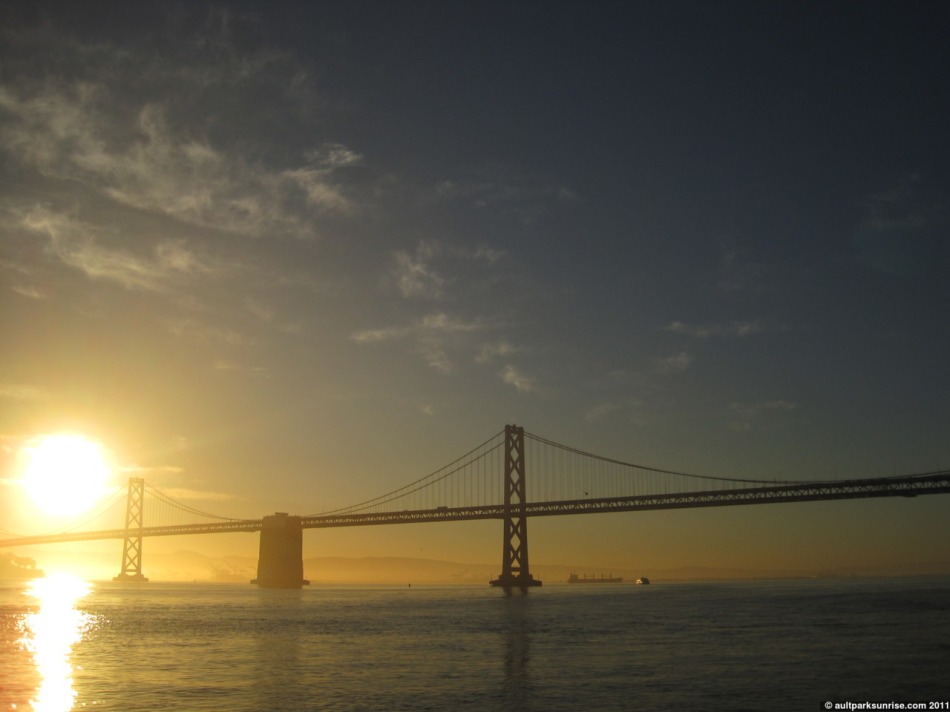 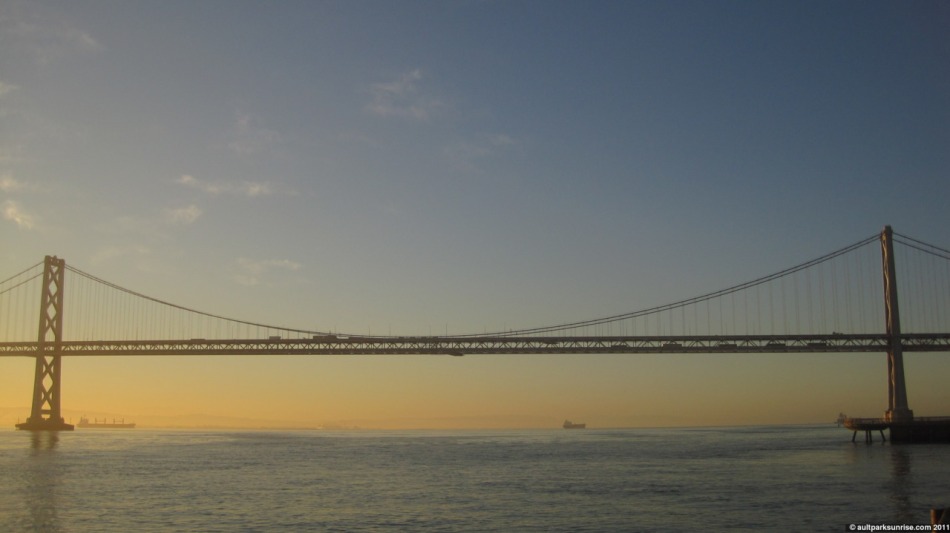 I thought about catching a bus to the bay (only a 15 minute walk) because it only costs $2 and comes with a transfer that I could use for the return route. I ended up jogging to the Ferry Building down market street. I am lucky to be staying so close to the eastern shore of the island that provides a great viewpoint of the sun. 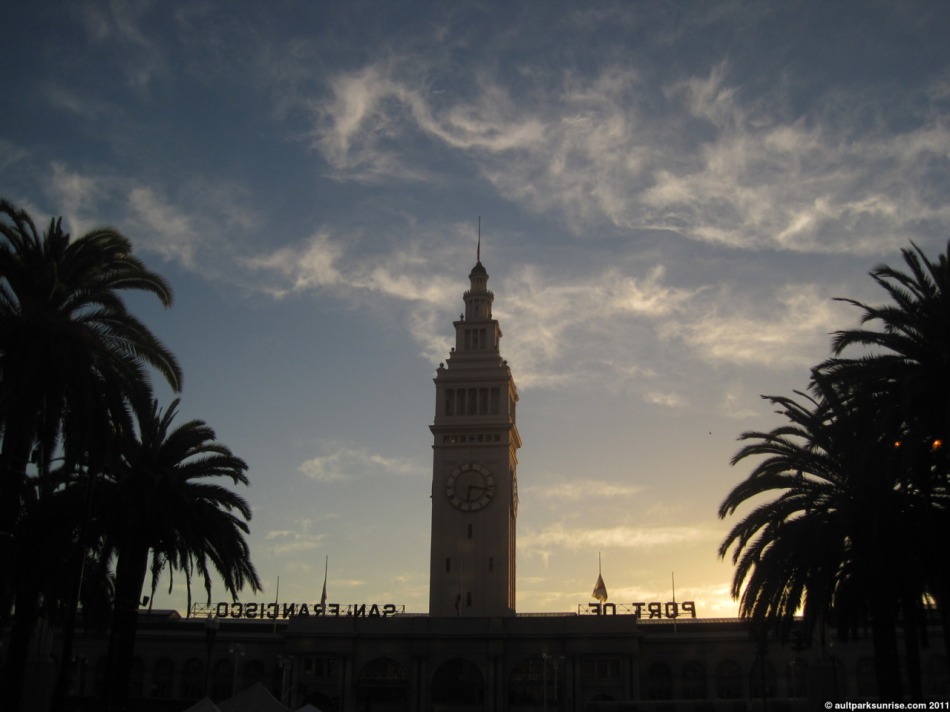 The streets were bustling by 6:00am when I arrived at the Ferry Building. The ferries were bringing commuters from the other side of the bay by the boatload. I was pleased to find that I didn’t miss the sunrise. While showing up ten minutes earlier would have been ideal, the haze over the water provided a beautiful orange/blue colored sky. 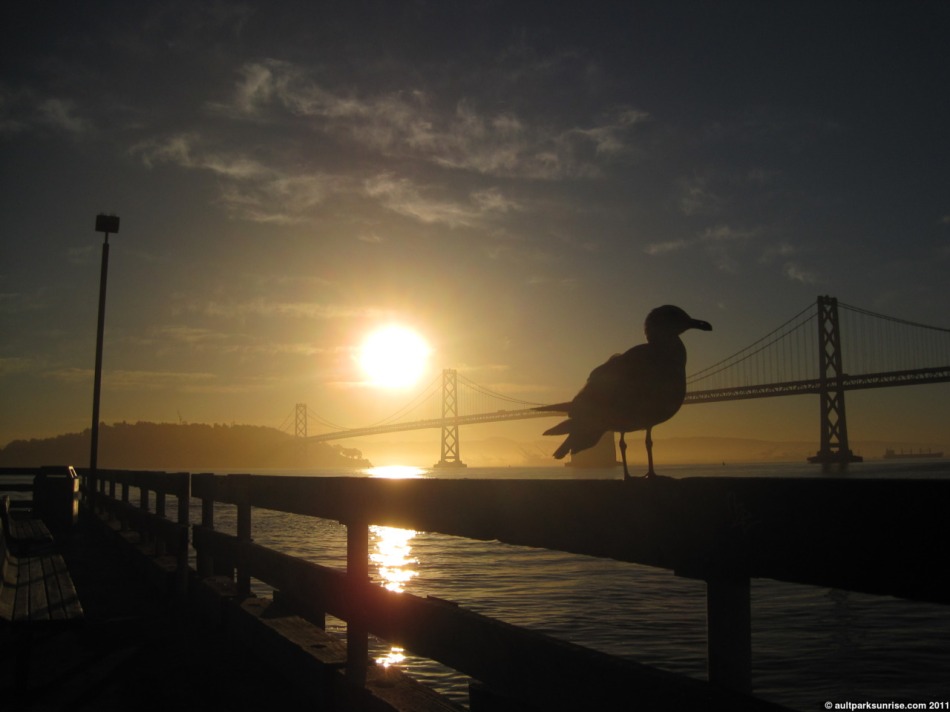 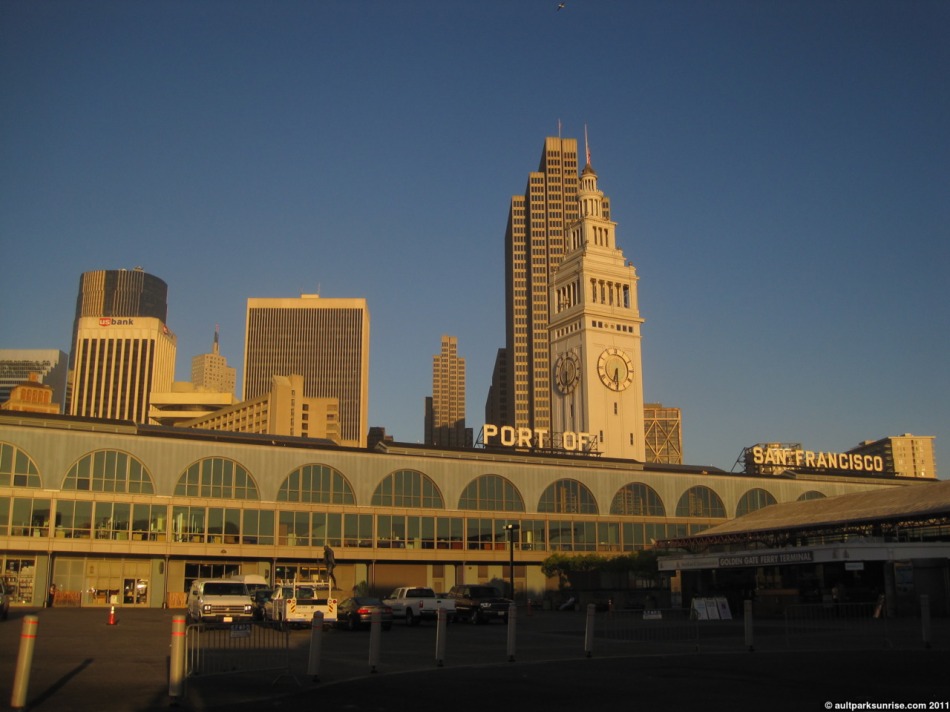 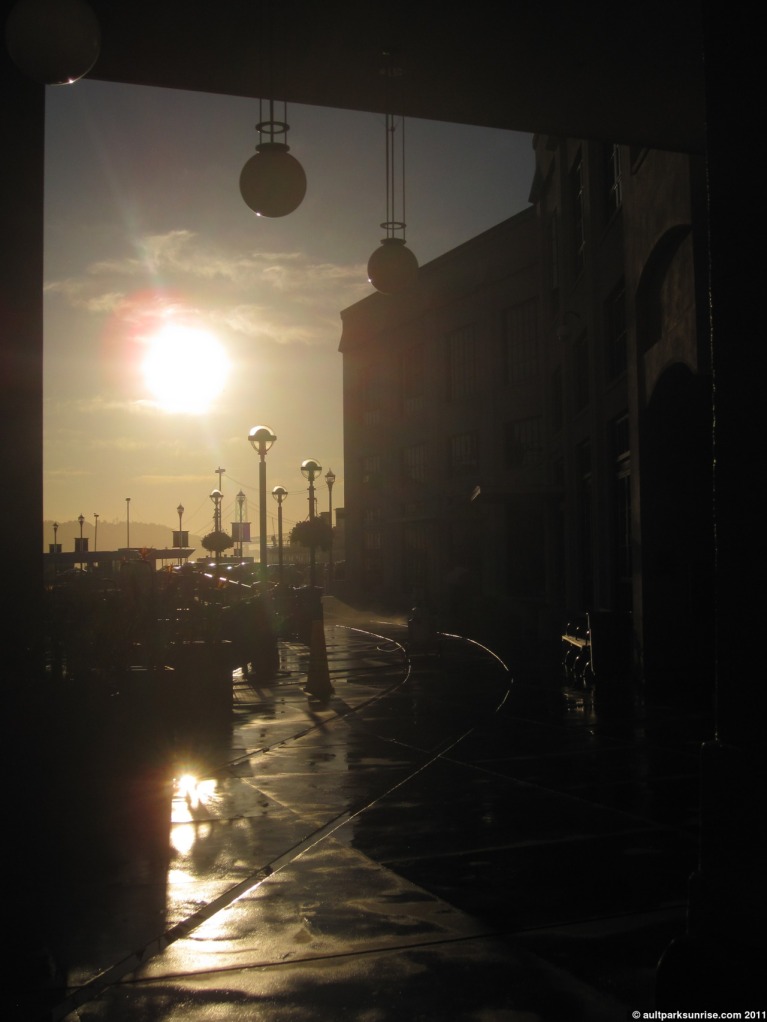 Oh how I love old rail lines. This one is obviously not in use as it has been cemented in.

The seagulls around here are like domesticated cats. They stare back at you. I do not doubt I could walk up and pet them, but to be honest I’m a bit scared to try. I can walk up and stand next to them and they hardly even pay attention to me.

I walked along the rows of piers and watched the merchants set up shop. The “Embarcadero” strip along the bay is a historic gem of the city. One thing that has impressed me so much about San Francisco (not that I should expect differently from such a healthy city) is that they have really gone out of their way to not only preserve so much historic relics from the past, but also actively use them in daily business. While there are plenty of modern “hybrid” buses in the city, the early 1950s rail cars are heavily used for daily commuters. 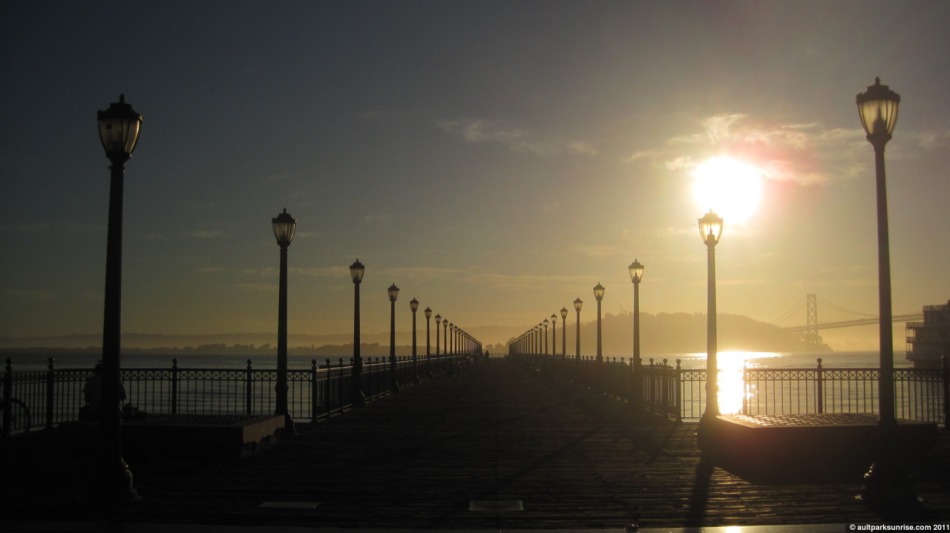 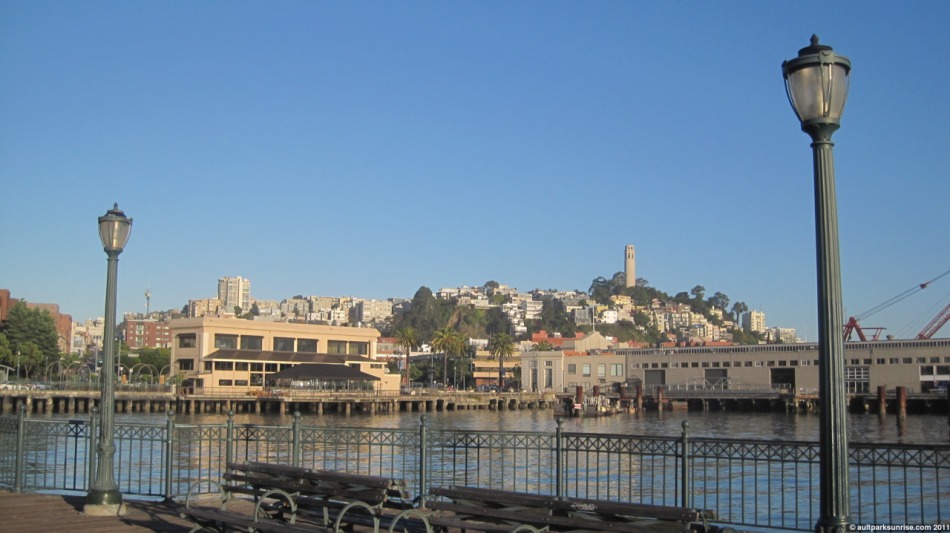 Looking at Coit Tower on Telegraph Hill from Pier 27 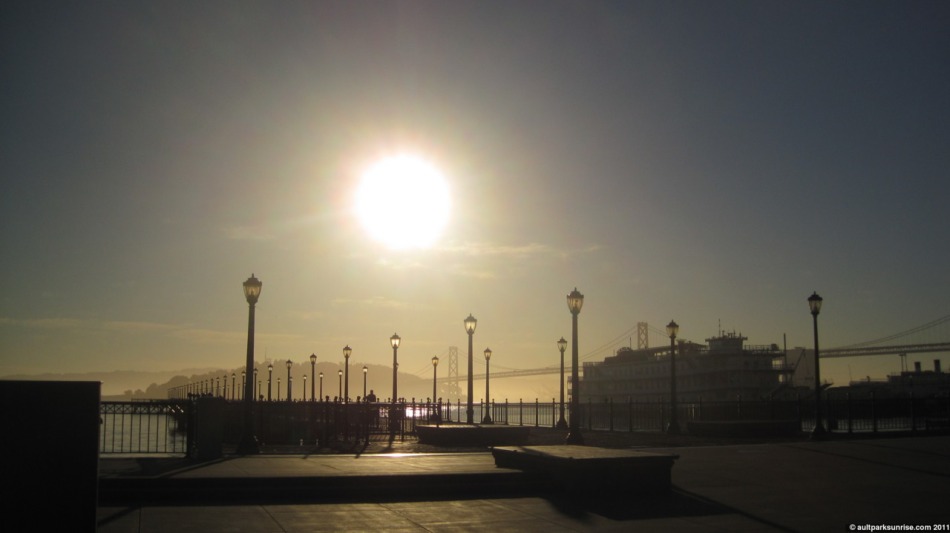 Pier 27 looking out at the Bay

We’re off to go check out the Anchor Steam Brewery. Stay tuned for more sunrises, I hope this isn’t the last 🙂 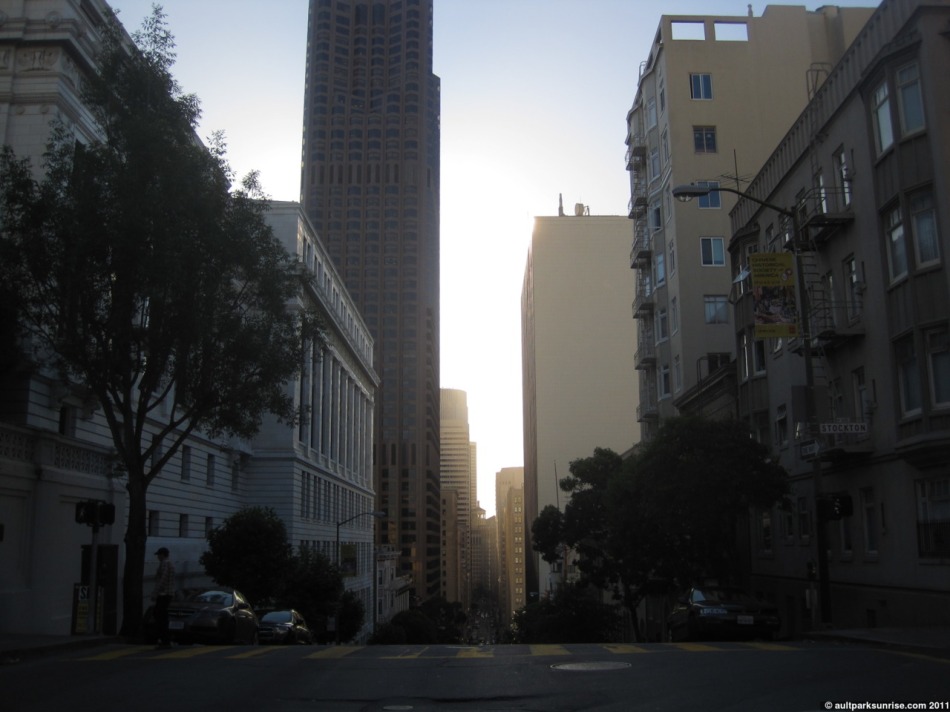 These hills do wonders for leg muscles.

Here are some pictures from the sunset two nights ago. These are down by Fisherman’s Wharf, close to Chrissy Field looking West across the bay towards the Golden Gate Bridge. 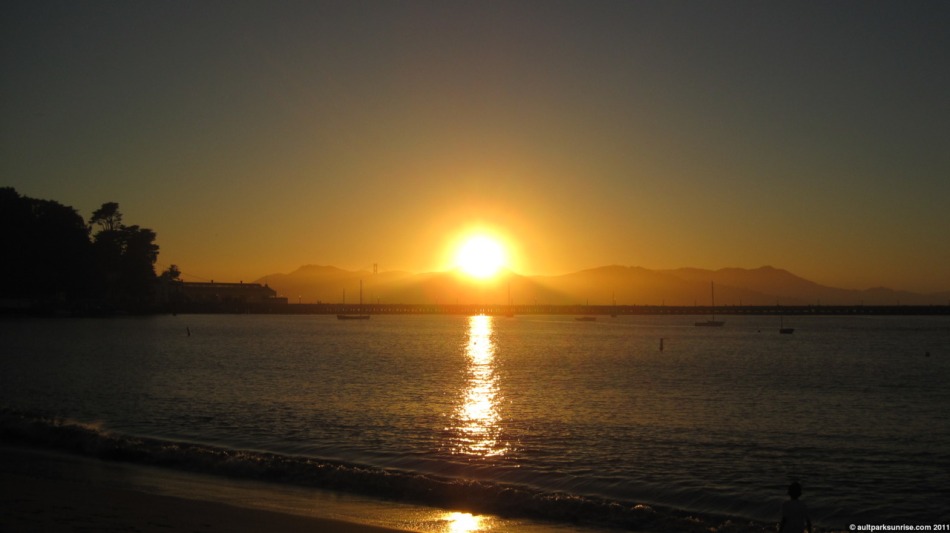 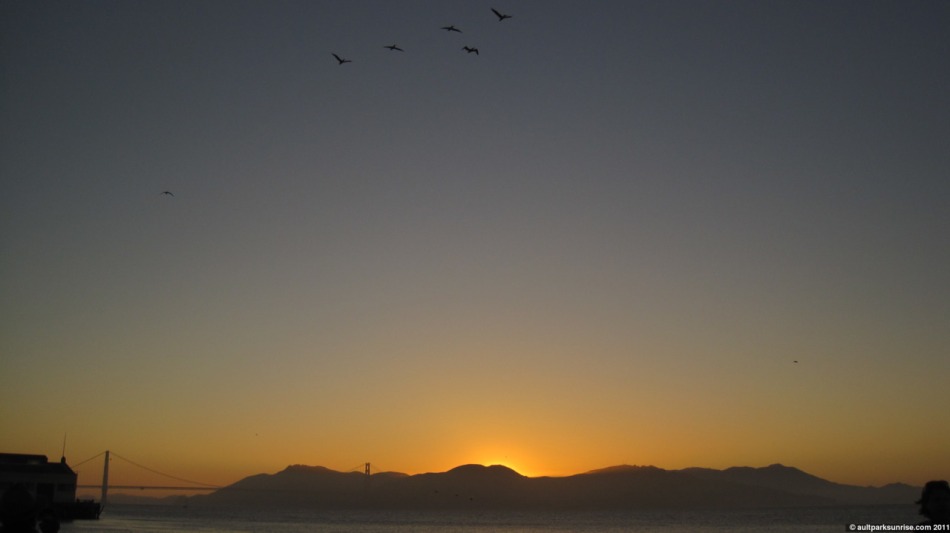 Birds of the sunset 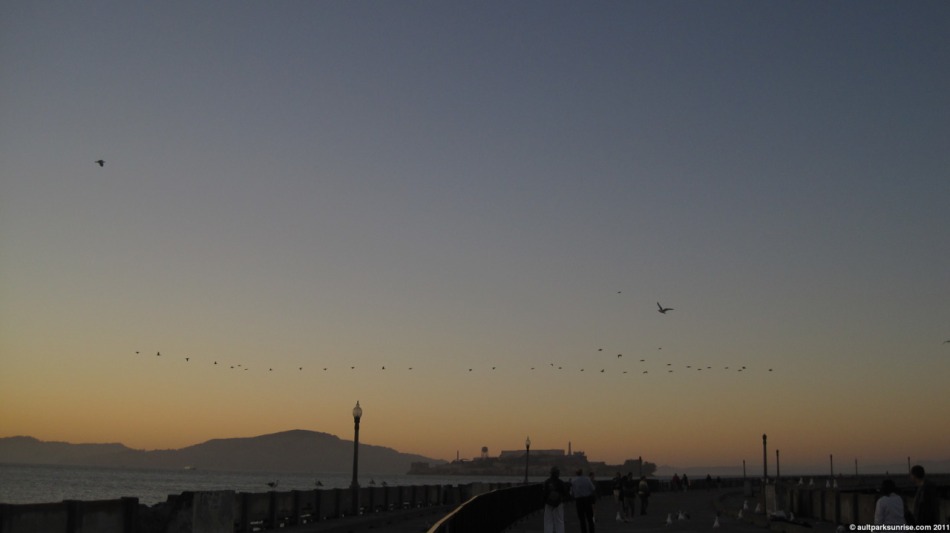 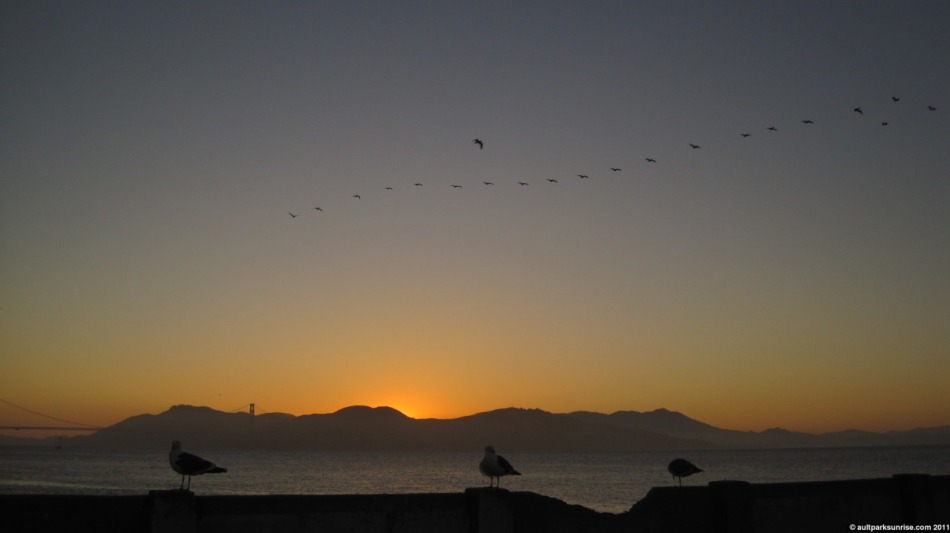 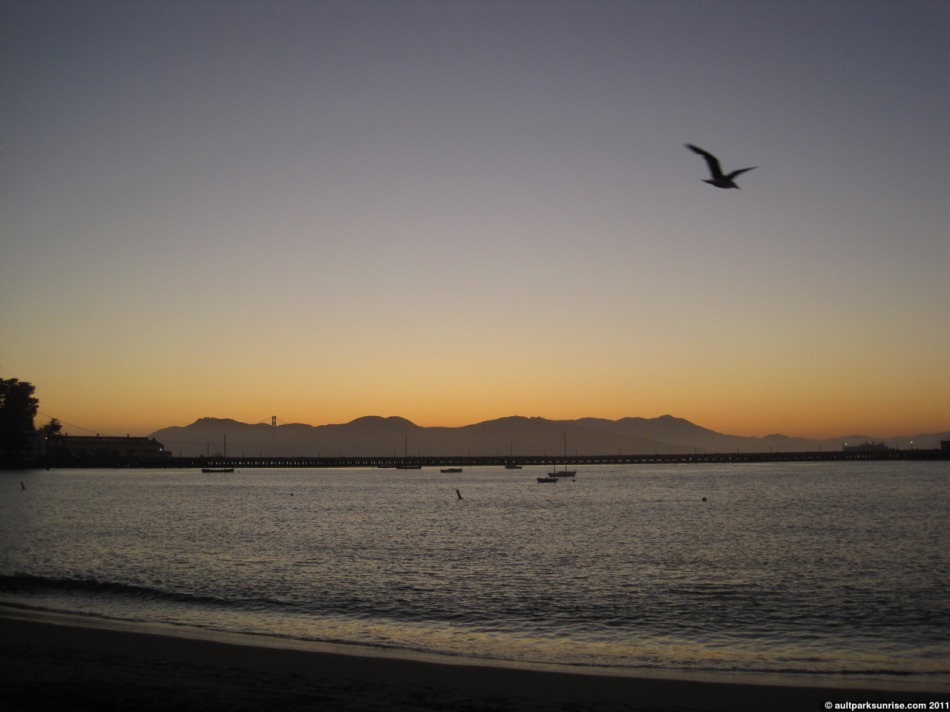 The sun has slipped behind the mountains. You can see the Golden Gate Bridge, just barely, on the left in the distance 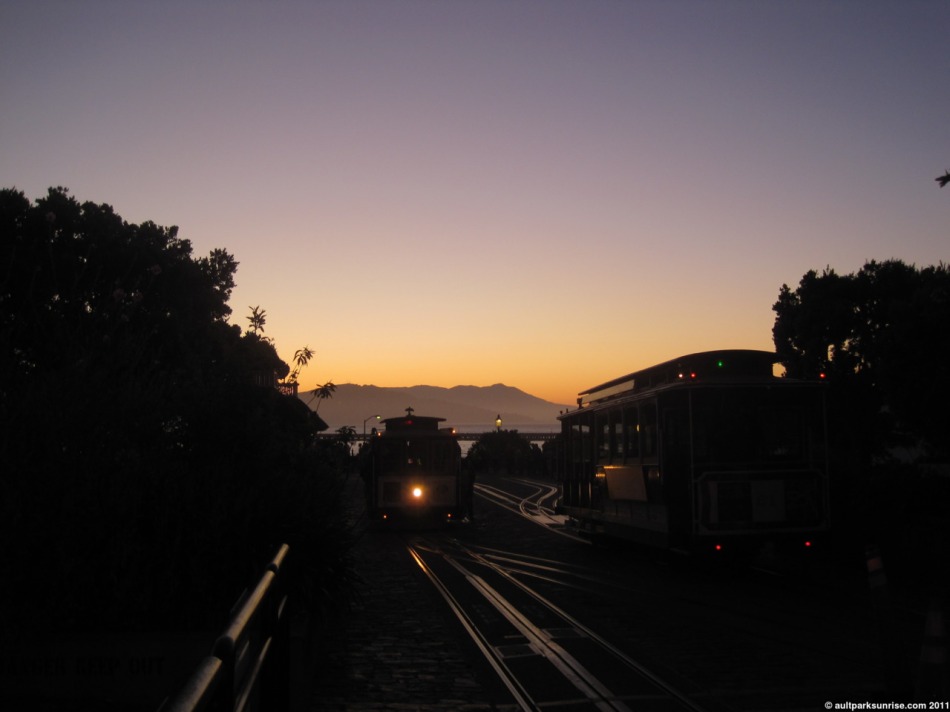 The Trolley Turnaround at sunset.