When I peered out the window at 6:20am, I couldn’t tell what the sky was doing. In my mind, I played with the idea of going back to bed but before committing I checked out the front door. High in the atmosphere there was a thick cloud layer that was making the eastern sky particularly dark, but it broke in the center of the sky to reveal a dark clear sky that was beginning to take on a subtle early twilight teal. I figured that it was worth the game and headed up to the park to see what the pseudo-spring morning had in store.

The temperature this morning was pleasant. Hanging slightly above freezing, it felt like spring with two sweatshirts on and insulated athletic pants. Looking out across the valley, the breaking cloud formation stood proudly in the distant left/north region of the sky. To my direct front, the cloud layer was thick but broke just above the horizon, revealing a deep gray-fading-to-orange sky beyond the far ridge line. At first, I wasn’t sure if any colors would get through the morning clouds. If only a sudden change in the western wind would slide the cloud break back over to the east a few miles…

But then I checked the time and realized it was 7:08am, a full 20 minutes before sunrise. There was still time for something interesting to happen. As it turns out, I only had to wait 5 more minutes…

Needless to say, the gamble paid off.

This is Mike the Turtle. His eyes are striped, matching his skin pattern. He loves romaine lettuce, hates iceburg. Likes chasing fish, does not like stawberries (unlike most other turtles who love them). When he’s basking in the sun he gets lethargic, likely giving into the life-giving warmth that only a cold-blooded animal could appreciate.

Coming into the park, I can see that the northern sky has broken and is reflecting some early twilight colors. But the eastern sky is dark and gloomy.

A plane takes off during mid twilight against a dark, gloomy, but hopeful cloud bank.

For the rest of this post, 12 pictures total, click to continue if you’re on the front page.

END_OF_DOCUMENT_TOKEN_TO_BE_REPLACED

Good morning! I have been on a bit of a hiatus over the last week so it was great to get out on the bike this morning for the chilly but clear Sunrise 144. Over the past two weeks I’ve been a bit under the weather so I took advantage of the extra hour of sleep that comes with skipping the sunrise ride. We also moved into a new apartment (still near Ault Park of course!) so there has been all of the logistics that come along with that. My new location is closer to the other side of Ault Park and it will be interesting to see how this affects the scouting of new sunrise locations. My routine has been a bit messed up lately due to the move, so this morning was a great opportunity to explore my new potential routes to the park.

Over the past week the sunrise time has shed about 15 minutes. This morning First Light was around 7:31am, a time that shocked me last night when I found out! It’s funny how that happens – the daily routine comes and goes, time slips by, and the sunrise keeps on moving along. It’s finally getting into “early” territory which means that the sunrise will no longer feel like sleeping in and will start to require a bit more commitment to getting up extra early, a tenant that resonates with the original purpose of starting this project. Now that I know about the beauty of early twilight on a clear sunrise, I have a feeling that there will be some 5:30am wakeups in my not so distant future.

Unfortunately I missed the most vibrant phase of this morning’s sunrise. By the time I tracked down all my gear, something I have been nervous about doing since the move, and then grabbed some coffee at UDF, I only had about 15 minutes to spare by the time I got to the overlook. The new route is quite a challenge, too, because I’m approaching the park from the opposite direction. From Mt. Lookout Square, the ride is mostly a smooth uphill. From Observatory, however, it is a steep uphill, steep downhill, then steep uphill again. It really gets the blood pumping. It is a nice challenge though as we approach the one year anniversary of the project.

The sunrise this morning was set against a crystal clear atmosphere with a nice set of vapor trails and whispy low horizon cloud action. Last night I could see a whole set of stars up in the sky after sunrise, including a bright appearance of a planet (is it Saturn?). The stars were awfully bright last night, meaning that if the sky held this morning’s sunrise would have started the show up to an hour, or more, before sunrise time. This was indeed the case this morning and while the sky was continually changing from the time I was out of bed at 6:50am until I arrived at the park at 7:20am, most of the pink and magenta colors had mostly dissipated early in the twilight. The late twilight colors were a glowing set of orange with bright yellow streaks reflecting off of the ice crystals embedded in the vapor trails high in the atmosphere. There is still a bit of snow left in the park, although it’s more of a sprinkling rather than a coating.

That’s my one regret from this 10 day hiatus is that I missed our most recent snow storm that came through with a fury after the January warm streak. There’s no worry though, because while it was a pretty snow fall, the warm ground didn’t let more than a half inch accumulate. I’m still waiting for the freak midwest snow storm that we deserve! The weather man is calling for some snow tonight so we’ll see where that ends up. Now that the temperatures are finally cold enough for snow, getting as low as 9F this morning, I think it’s just a matter of time until we get a decent snow fall.

Heading into the park past the Cincinnati Observatory, I can tell that the vibrant magenta display is already fading out.

I arrive at Heekin Overlook on this chilly winter morning during the final phase of late twilight.

The edge of the hill where the overlook sits still has a good amount of snow. The cool winds coming up from the valley likely provide a little micro climate that protects these snow piles during the warmest part of the day. 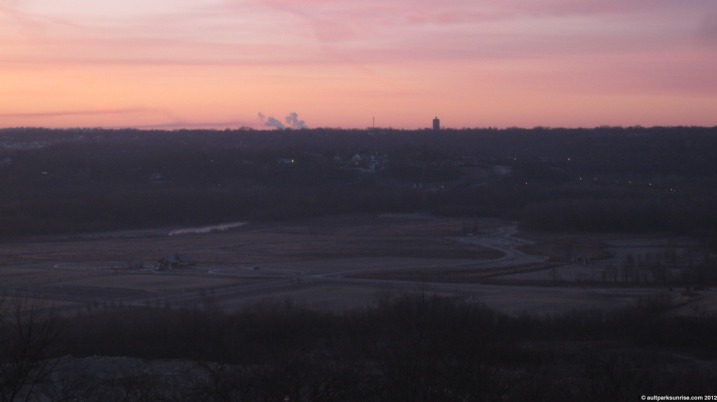 Looking down at Armleder Park under a light pink twilight

The favorite subject of winter sunrise pictures, the adolescent Tree of Heaven. Sadly, the sun is moving briskly across the horizon to the left, and soon our Tree of Heaven will lose the colorful back-drop of the twilight sky 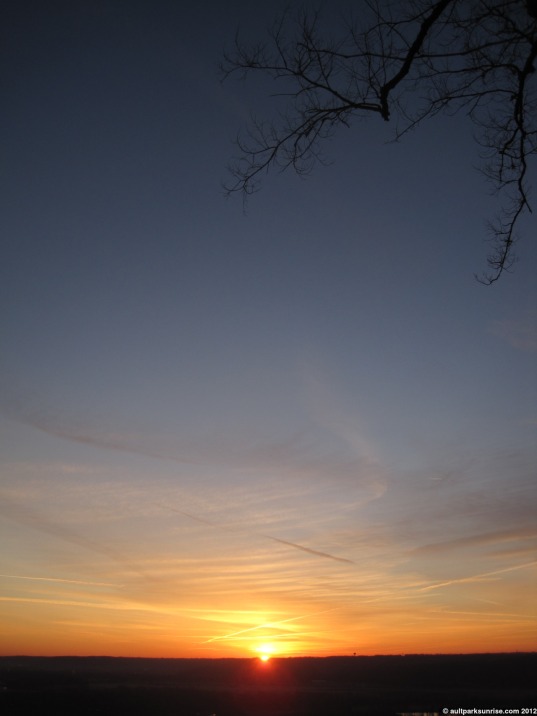 Sunrise 144 @ Ault Park. The ultra-clear atmosphere means that the intensity of the sunrise is extreme from the get go. 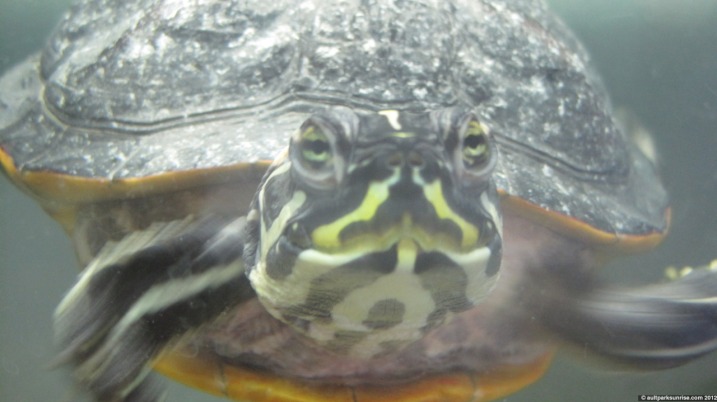 And finally, here’s a blurry picture of Mike the Turtle, our six year old native painted turtle. He’s enjoying his freshly cleaned aquatic home and his 5 new fish companions. I had to make sure to get extra-lively feeder fish this time because their predecessors didn’t make it very long. These new ones have no problem skirting Mike’s lazy attempts to catch them. He usually gets bored after the first day so it looks like they’ll do just fine.