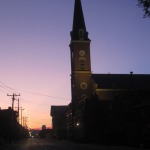 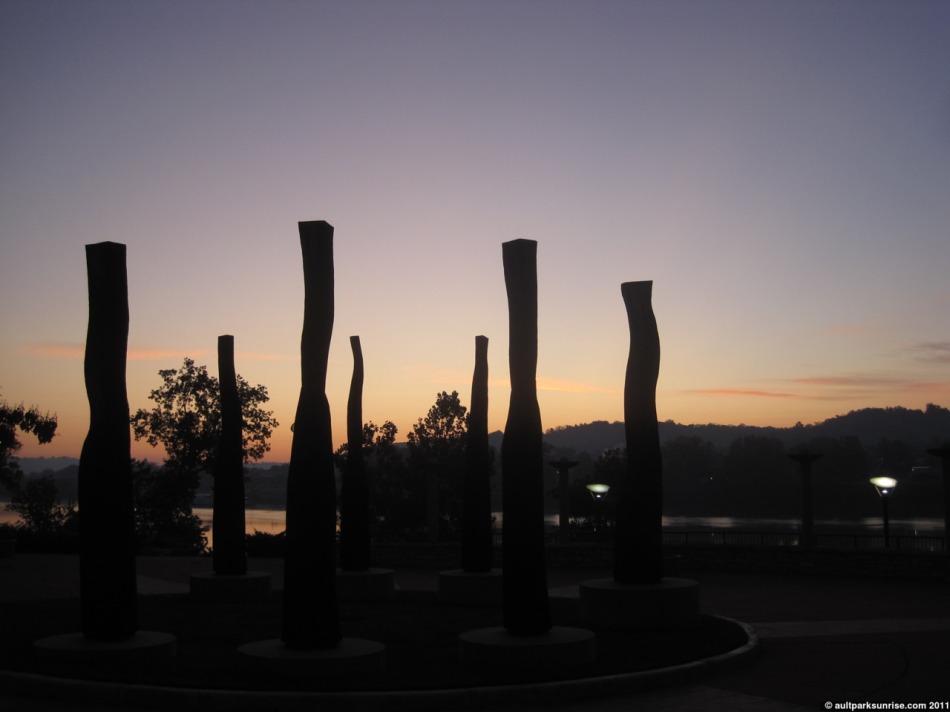 As the atmosphere takes on a distinct shade of yellow, I arrive at the eastern edge of Sawyer Point coming into downtown Cincinnati. 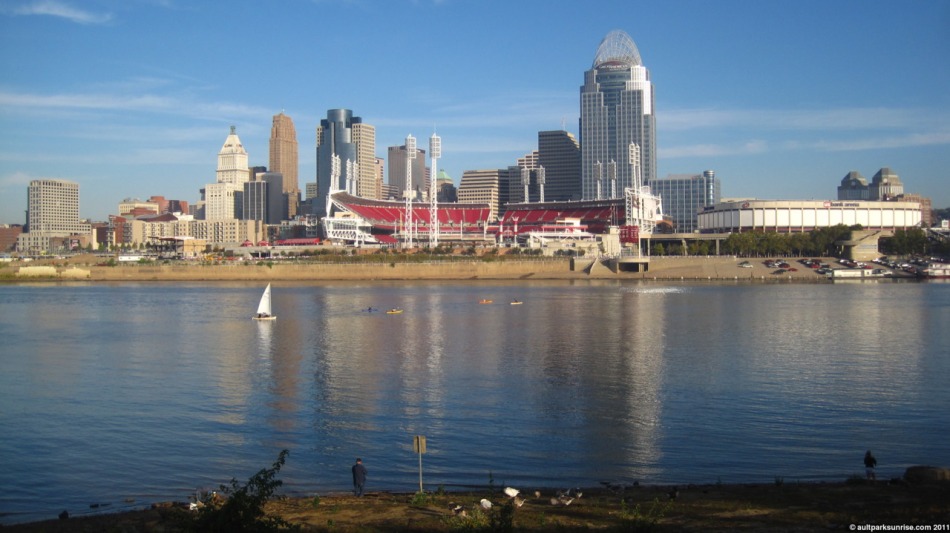 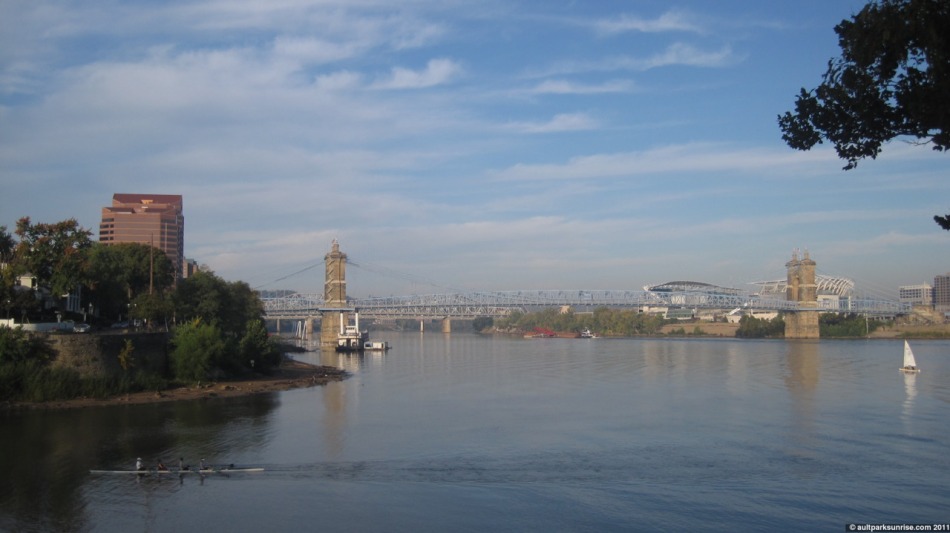 Rowers heading up the Licking River and the John A. Roebling Suspension Bridge in the distance 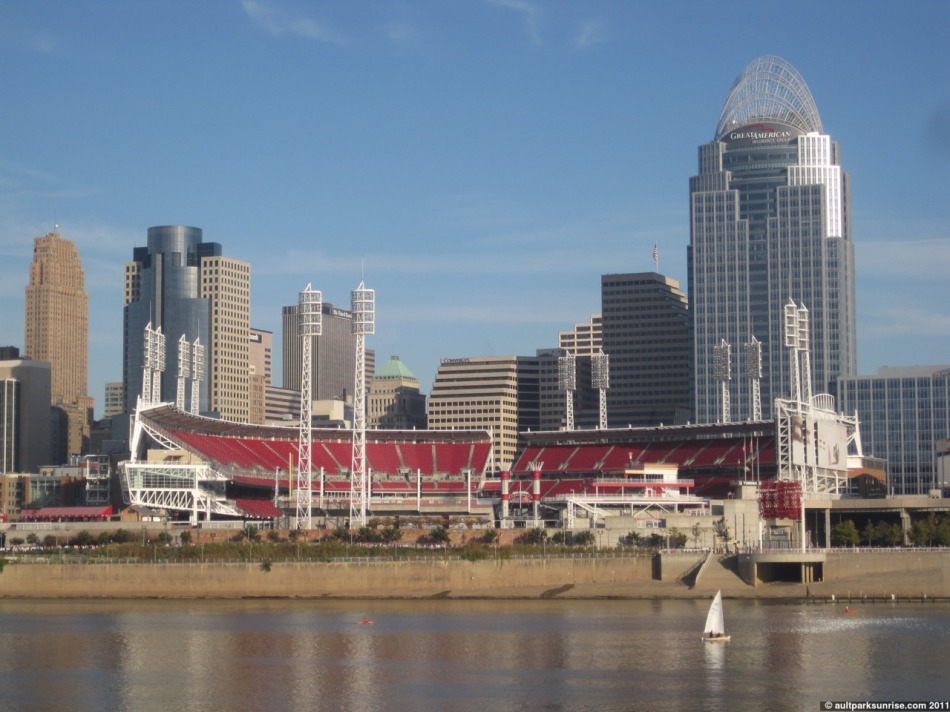 A sailboat and the Reds Stadium. Featuring Carew Tower and the Great American building.

This morning’s update is a doozie! This is actually yesterday’s sunrise but I got carried away on such a pretty day and took way too many pictures. I didn’t have time to finish the processing yesterday, so it’s coming at you a day later. I retraced much of the route I took during Sunrise 9 in April. Has it really been 6 months?

I woke up Sunday morning with only 5 hours of sleep under my belt. We were out late for a friend’s birthday party the night before but I had already made up my mind that I was going to take advantage of this amazing October weather. I originally set my alarm for 6am, which was way too early considering sunrise was 7:41am, and accidentally slept for another hour. It worked out perfectly and I was thankful for the late sunrise time. I was out the door with my bike and coffee by 7:00am, armed with the goal of seeing the sunrise over the Ohio River in Downtown Cincinnati. I ended up being swept up in the American Cancer Society’s Making Strides Against Breast Cancer run/walk where over 12,000 people came out in the 15th annual event. The walk provided a rich texture to the acoustic backdrop to my four hour morning exploration of Sawyer Point and Newport, Kentucky because the speaker system could be heard anywhere along the banks of the Ohio River. I ended up hanging out in General James Taylor park in Newport, Kentucky, a park that until now I had no idea existed. With nothing but water and open air between myself and the headquarters of the walk about half a mile away or more, I listened as the walker told their survival stories, did the electric slide, and got themselves pumped up. The timing of my morning ride couldn’t have been more ideal because by the time I got to Sawyer Point, the first of the crowd was already starting to show up. I ended up getting stranded in Kentucky for about an hour as I waded, slowly and patiently, back to Ohio on the Purple People Eater Bridge through the torrent of thousands of pink-clad people. I actually found it kind of hilarious because I never considered how dependent I was on the only pedestrian bridge that links Newport and Sawyer Point!

While hanging out at General James Taylor Park in Newport, Kentucky on the banks of the Ohio River, I was greeted with the breathtaking view of the Cincinnati Skyline at sunrise. And a beautiful sunrise it was. I had known that I wouldn’t have an excellent view of the eastern sky so I had planned to wander around looking for a strategic spot to drink my coffee and enjoy the crisp and clear autumn sunrise. While chillin’ at the park, I saw a team of rowers practicing on the river, observed the local fishermen and watched a barge barrel down the river and do some impressive maneuvers as it banked into the Ohio River. The BB Riverboat also made an appearance and there was even a small sailboat that moved gracefully throughout my panoramic view of the skyline.

I’ve always loved the Cincinnati Skyline but Sunrise 103 really helped to solidify that feeling for me. I’ll go on record as saying that of the cities I’ve visited in my relatively inexperienced travel ventures, Cincinnati’s Downtown Skyline has to be one of the most beautiful skylines in the country, if not the world. Every city’s skyline is unique and beautiful in it’s own right, of course, but I feel like Cincinnati’s has the perfect combination of several properties.

For one, it’s relatively small. You can “see” the entire skyline without having to pan around. I can take it all in with a single view.

Second, What’s a skyline without a proper view? The view from the Kentucky side banks of the Ohio River is seriously amazing. The river and air is open and the banks in Kentucky are not overdeveloped by any stretch, providing easy access for anyone wanting to take it in.

Third, the architecture really tells a story, although I imagine this is common with many cities. You’ve got several remnants from “Old Cincinnati”, the late 1800s boomtown that was rivaling Manhatten with it’s urban density. The PNC building and Carew Tower (which was used as a model for the Empire State Building) rise to the western edge of the skyline. As I gaze at the buildings, I can imagine what a magnificent sight this must have been in the early 1900s. It isn’t too hard to ignore the Great American Insurance building (for now). The ending animation (35seconds forward) of the evolution of the New York Skyline in the movie Gangs of New York really made me aware of how the skyline of a city can tell historic story. I also like that we can see both the Bengal’s and Red’s stadiums as well as the US Bank Arena. There is the new Great American Insurance building, a shining example of modern architecture. A quick side note on the GAI building though. I like to think of the GAI as a young punk business executive. On one hand, it stole the “tallest building” title from Carew Tower, which held it for over 70 years. That’s OK though, progress marches on. It’s a beautiful building! It just makes me a bit nostalgic because I have a special place in my heart for Carew Tower and it’s legacy. They did pay respect, however, in the form of keeping Carew Tower at a higher elevation as to not upset the balance of the skyline. Yesterday morning, however, I realized something else! Something that I probably wouldn’t have thought about except through the contextual lens of this project. The Great American Insurance Building is aligned perfectly in such a way as to entirely block out Carew Tower from getting a view of the sunrise! I watched in a partial trance as the shadow of the GAI’s tiara moved from the top of Carew Tower down to the bottom. I’m being a bit dramatic, of course, but that doesn’t stop me from envisioning a quirky anthromorpized prime time sitcom featuring all of the buildings in Cincinnati’s Skyline living together in a small London flat and the tension between Carew and Great American being thick enough to cut with a knife. Now that I think about it, maybe I spent a bit too much time staring at the skyline… 🙂

As it turns out, the James Taylor park in Newport Kentucky is a memorial to a defensive battery that protected Cincinnati from the “Indian Wars” in the early 1800s, and later provided the final defense against an approaching Confederate Army during the Civil War. Whenever I find out about pieces of trivia such a this, I always think about the classic well-deserved nickname for Cincinnati: “The Gateway to the South”.

Some of these pictures are a bit redundant. The lighting was so accommodating and there was a lot going on. I am just throwing them all up on here, as usual, and letting the reader figure out which pictures they like the most (if any!). 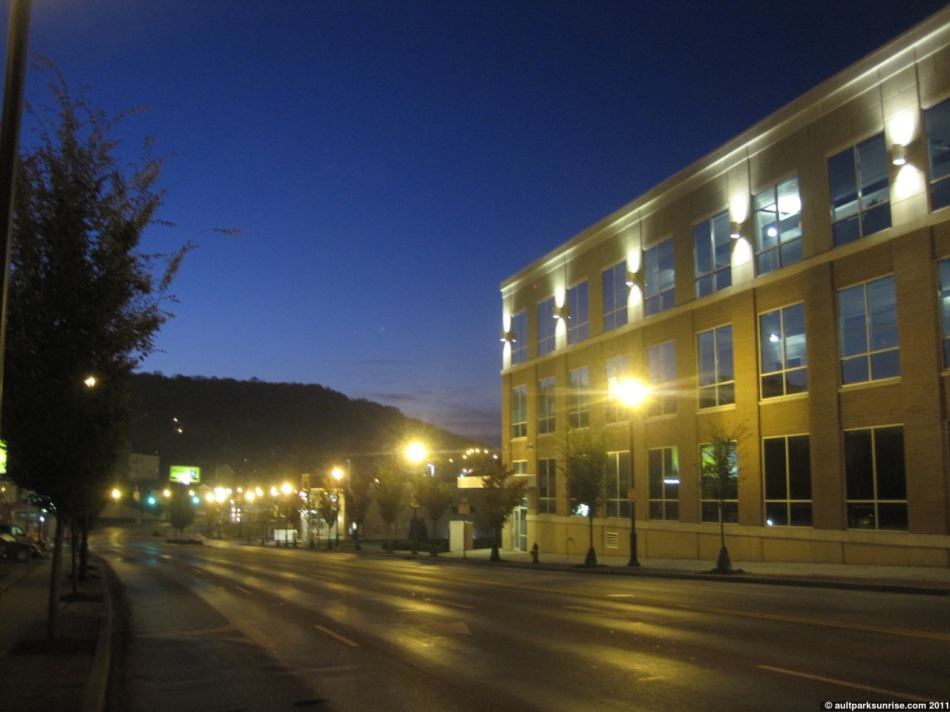 When I left, the sky was dark but showing a hint of light. Looking East down Columbia Parkway in East End. 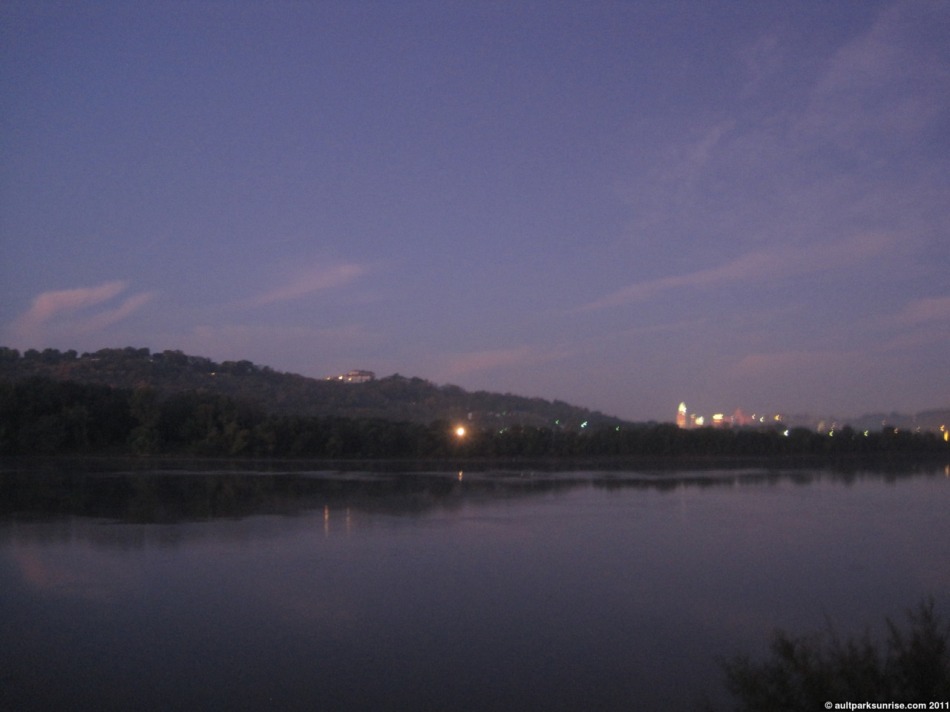 A blurry view down the Ohio River of the Cincinnati Skyline. I’m always so impressed with how much distance I can cover so easily on my bike. 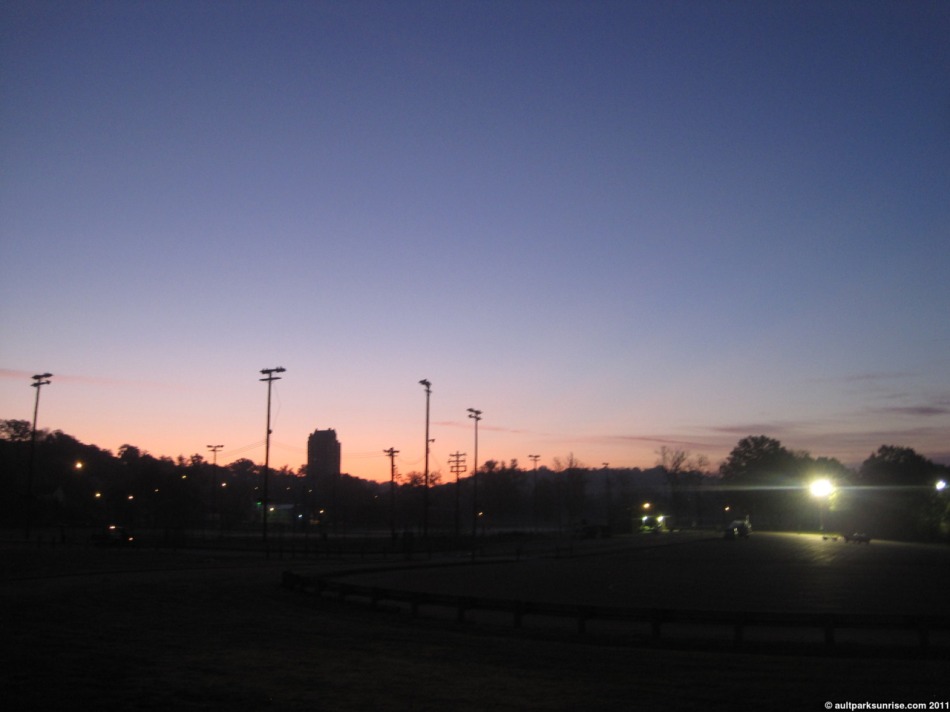 The unfolding of a sunrise in a clear sunrise takes about 40 minutes. This morning was no different! The 25 minute ride to downtown was far from dull! I felt like I was racing the sun to Sawyer Point. 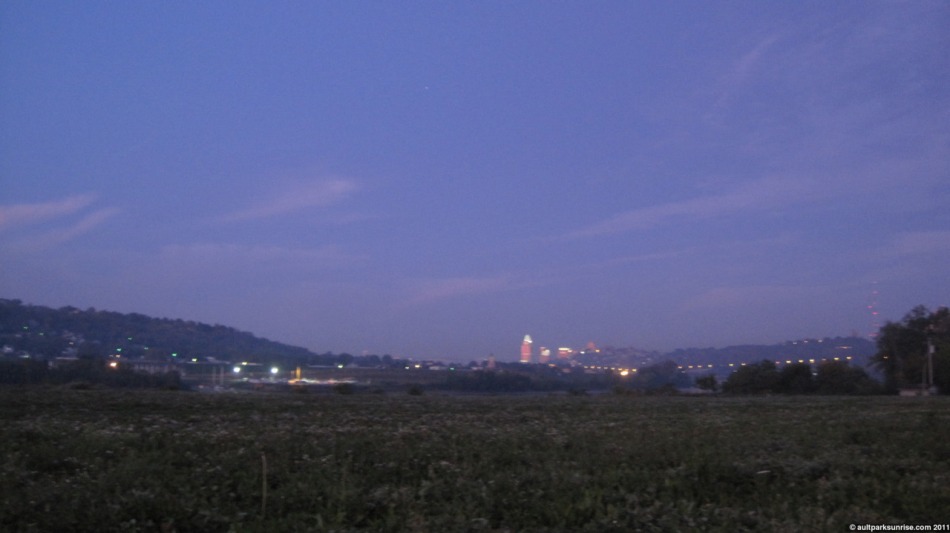 Another blurry view across the bend in the river. 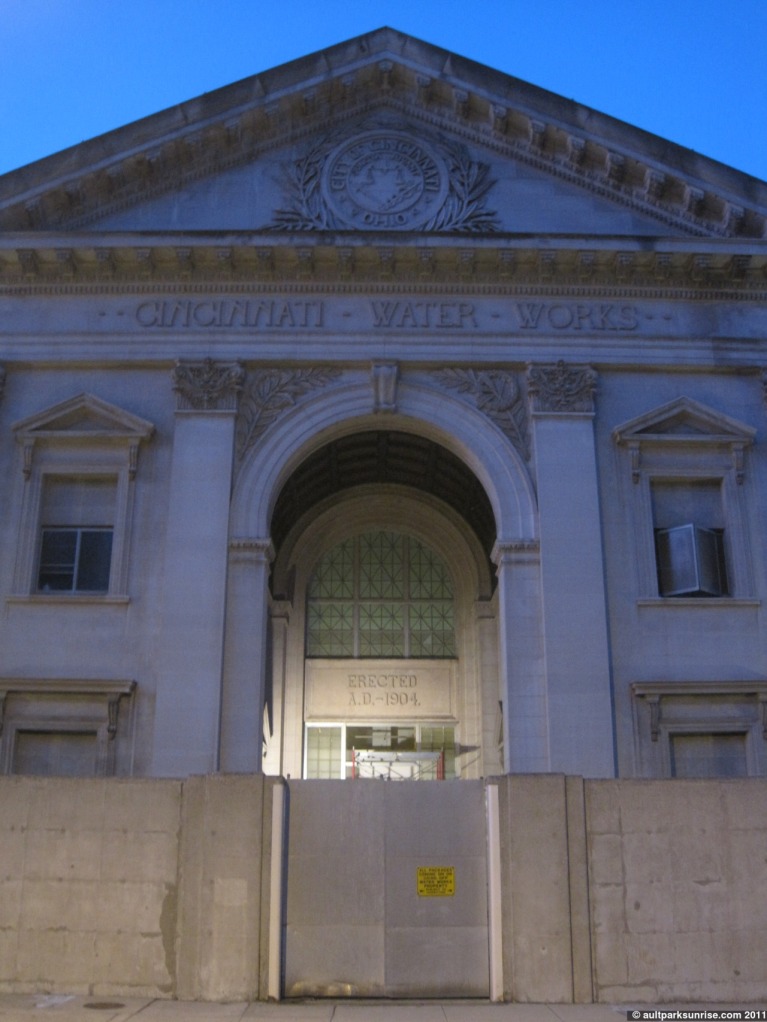 I always get a full look at this building. Cincinnati Water Works, constructed in 1907. I finally ran into someone whose father works for the city. It turns out that the building is very much used today, but the stone wall that runs around the perimeter was built for “homeland security reasons”. Damn it. It’s so ugly. 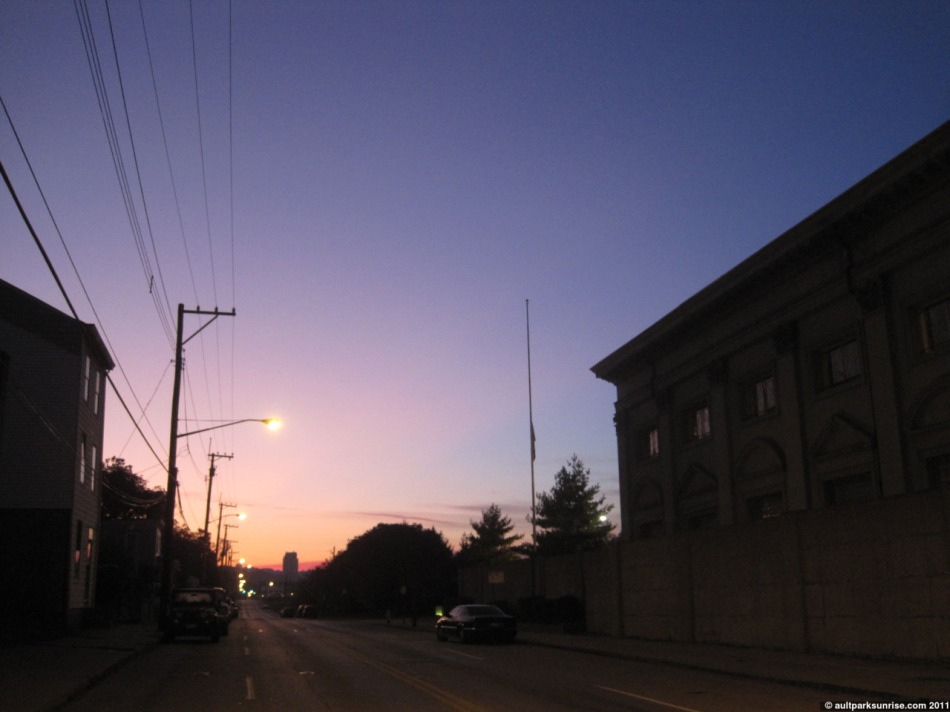 Behind me, the atmosphere has started to show some signs of red. Better hurry along now! 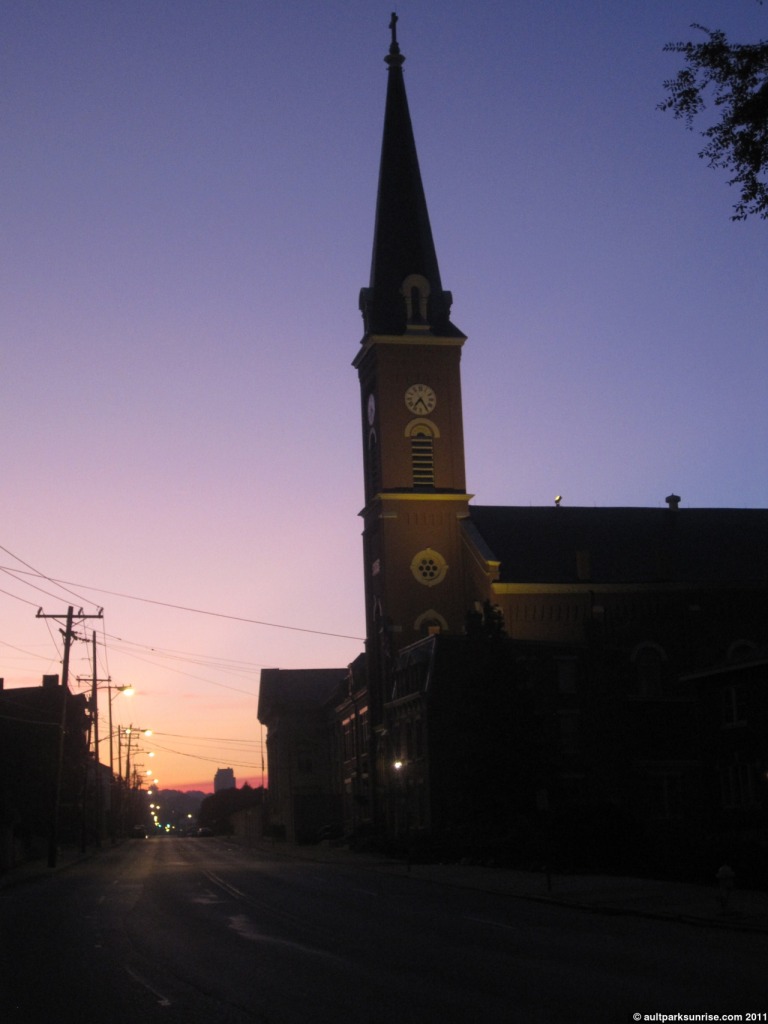 St. Rose Church on Eastern Ave. If that clock is right, I’ve got 15 minutes to spare.

If you’re on the front page, click to see the rest of this post. About 73 pictures total! END_OF_DOCUMENT_TOKEN_TO_BE_REPLACED