This beautiful sidewalk chalk art adorns the walkway in front of Ault Park’s central lawn on this one-year anniversary of Ault Park Sunrise. A spring sunrise tribute to the celestial titans? An innocent piece of work created by a young artist on a lazy Easter Sunday? Perhaps a professional installation done by a world master! Another mystery that will likely never be resolved. 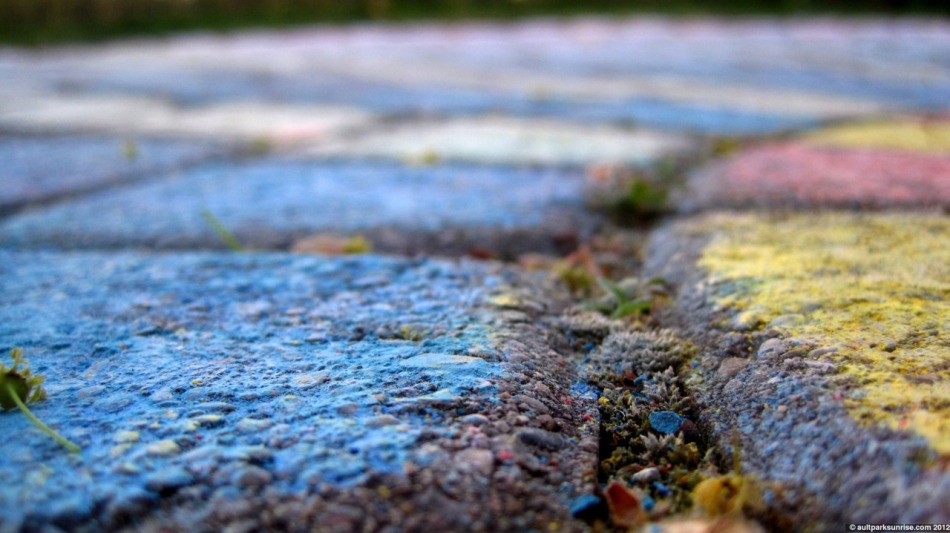 Macro Chalk. Even the moss between the stones got a color bath. With no rain being forecast for this week, perhaps this temporary art piece will last through this weekend.

It’s hard to believe, but Ault Park Sunrise is one year old! This past year has taught me so much in so many areas. I’ve gained a new appreciation of my local community and the larger city as a whole. It’s also been the first year where I have watched the seasons pass with careful diligence and focus, something that can easily slip by as we focus on our day to day lives. I’m only one sunrise away from 160, which would have made for a great coincidental time stamp but that will have to wait until later in the week. I also have a small queue built up of interesting posts, including an essay from a guest writer, some beautiful pictures of the Ault Park’s blooms from a friend (which have now faded into memory), and some historical pictures of a local estate sent to me by a fellow Cincinnatian that sheds some light onto the history of one of the large estates in the area. Also coming up is Sunrise 158, which one may notice is missing from the front page. I’ve been working on it for the last week but unfortunately I haven’t finished it. Rather than continue not doing morning rides while it’s in the hopper (I don’t like posts falling behind lest they never get published), I decided to just put it on the “draft” list and get on with Sunrise 159.

I woke up this morning after a long holiday weekend (following a long work week) with a yearning for a sunrise ride. The ride was brisk and I actually had to turn around after my initial departure to get a sweatshirt. I stopped by UDF for a coffee (freefil Monday) and was on my way. The sky was crisp and clear to the east, but there was a slow moving cloud front moving in from the west. As the sunrise arrival came near, the cloud bank continued to slip further into the  eastern twilight sky, making for an interesting sky dynamic that was changing through the colorful early morning show. The sunrise itself was a nice deep orange with a few pink highlights that briefly dashed across the impending cloud bank.

The most surprising thing to me is just how quickly spring has arrived. It’s been just over two weeks since I visited Ault Park (Alms Park was my most recent visit before we left for Charleston), and yet the overlook is lush with foliage and the trees are well on their way to having a full spring coat of greenery. I’m also pretty excited about the sunrise time that continues to push earlier into the morning. Sunrise 159 clocked in at 7:09am and it will only get earlier as we march into summer.

One of the best parts about exploring a city park after a weekend, and in particular a holiday weekend with great weather, is finding the leftover markers of human activity. Sometimes there is trash, but more often than not there is something else: sidewalk chalk art! This morning I found plenty to entertain along the main walkway that runs along the center lawn in front of the pavilion. I was amused by the video game inspired “MarioKart” starting line. It was even complete with a set of “?” boxes 60 yards up the sidewalk, whose purpose is to give the player that runs over them an item like a green shell, banana peel, or even star power.

Behind the Mariokart tribute there was another piece of artwork that appears to have been left by an artist with a bit more patience and a steady hand. I found myself quite moved by the artwork, especially after I considered that the subject of the work appears to be a sun with its rays bursting out from the center of the tile into a blue sky. The artist (or artists) carefully colored each individual brick in the sidewalk and were even symmetrically mindful. I find it so interesting that this artwork has appeared on the morning of Ault Park Sunrise’s one year anniversary. I’ll just try to not think too hard about it :). 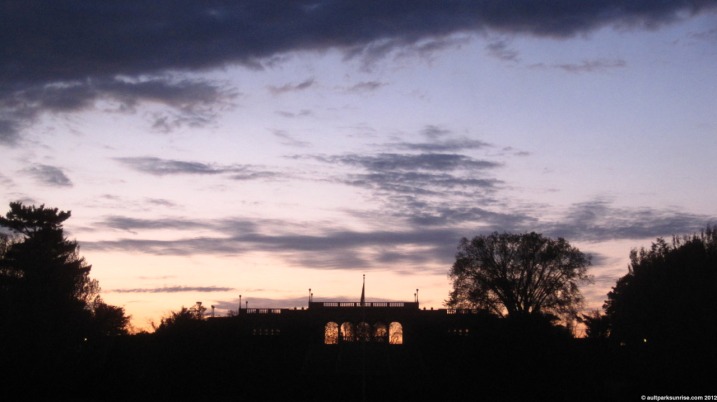 I arrived at the park just as the twilight backdrop was coming into full bloom.

The twilight sky was just beginning to take on an orange gradient as the east-moving overhead cloud bank threatened to block out the sunrise.

Has it just been two weeks since I last saw this Tree of Heaven? She was the subject of many winter photos, and already she has a healthy coat of green growth. Until next winter, old friend.

Just before sunrise there was this vertical column of pink that shot up through the sky. Here you can kind of see it to the middle/left of the picture.

If you’re on the front page, please click to continue. You don’t want to miss the sidewalk chalk! 🙂  END_OF_DOCUMENT_TOKEN_TO_BE_REPLACED