The Tree of Heaven silhouette against the misty twilight under a crescent moon. mark 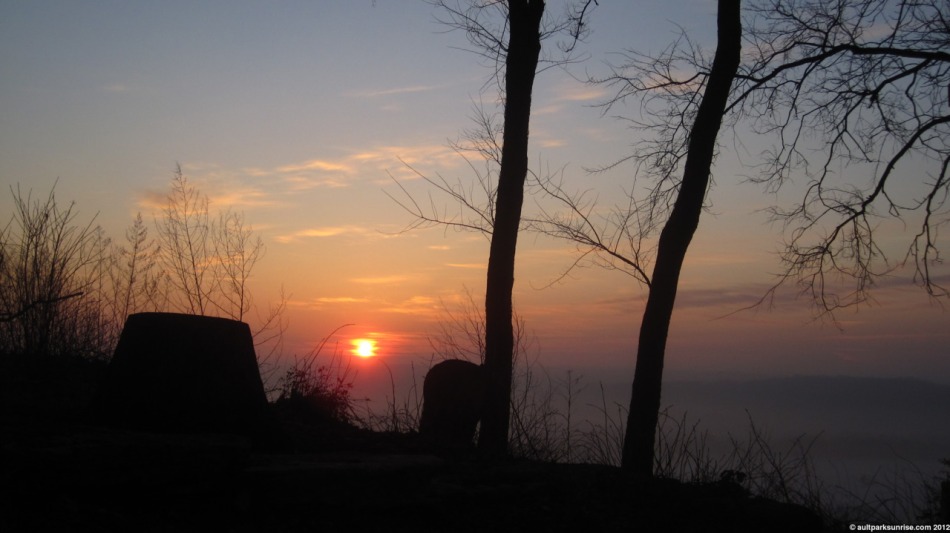 Sunrise 145; a humid, misty, winter sunrise on this beautiful Friday morning in February.

After a bout of rainy mornings I made sure to wake up extra early for today’s clear sunrise so that I didn’t have to rush up the hill to the park. I’ve come to terms with the fact that my new route, while being about the same distance to the park, is substantially more challenging. Armed with this knowledge, I rode up to the park with determination and energy. Fortunately I have mostly shaken the side effects of my head cold so I also had an extra bout of morning energy. The climb to the park was not bad at all this morning which goes to show you how much of life is determined by your mental approach and, to be quite honest, the state your body is in.

This morning was forecast to be clear with high humidity. When I strolled out our front door, I found thick patches of mist hanging around the edge of the forests and between houses. The misty backdrop under a clear sky meant that the sunrise colors were subdued and compact, while still allowing for the upper atmosphere to gain a brightness from the approaching twilight. I stopped by UDF for my $1 28oz refill and began my uphill climb (followed by the downhill slalom, followed by uphill climb).

The sunrise this morning was of the subtle, sneaky, but uniquely satisfying type. Not wanting to be rushed by traffic and forces of my own control, I woke up 1 hour before sunrise and tried to get out on the road as soon as possible. This put me in the park about 40 minutes before sunrise, a time that would have provided a brilliant magenta display if the humidity was 9%, not 90%. The crescent moon was on display high in the atmosphere, pointing down towards the horizon at the location that the sun was expected to rise. By the way, if you ever see a crescent moon pointing away from the sunrise (or sunset), you’re either dreaming (grab your totem!) or on some bizarro planet. Or maybe woodstock. It’s a nice indicator for checking reality as we know it.

The high humidity meant that there was a low lying mist bank down in the valley below. This is always a great accent to a sunrise because it lights up the lower part of the view, throwing lowlights and shadows across the otherwise dark valley. I imagine snow would have the same impact, but unfortunately we just haven’t had more than a single day’s worth of the stuff. The air this morning felt much warmer than I expected, likely due to the high humidity. I also had a visitor in the park this morning, a fellow sunrise cowboy who chose to stay in his parked blue mini. I’ve seen in a couple of times over the last several weeks, so I’m thinking that he’s making a routine of it. 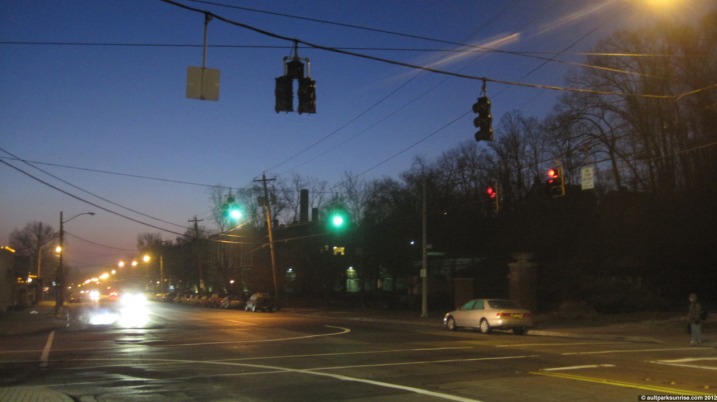 Heading out of the East Hyde Park UDF, the impending sunrise is already attempting to push some colors into the atmosphere but the effort is being hindered by the thick humidity in the air.

This is the “downhill” section of my new route. Uphill, then this exhilarating (and tear-inducing) downhill, followed by a fresh climb back up into the park.

If you’re on the front page, please click to continue. 18 pictures total in this morning’s humid & cold sunrise post.

Approaching the park, coming up behind the gardens, we can see the crescent moon hanging in the air.

Coming into the park, there’s already plenty of light. 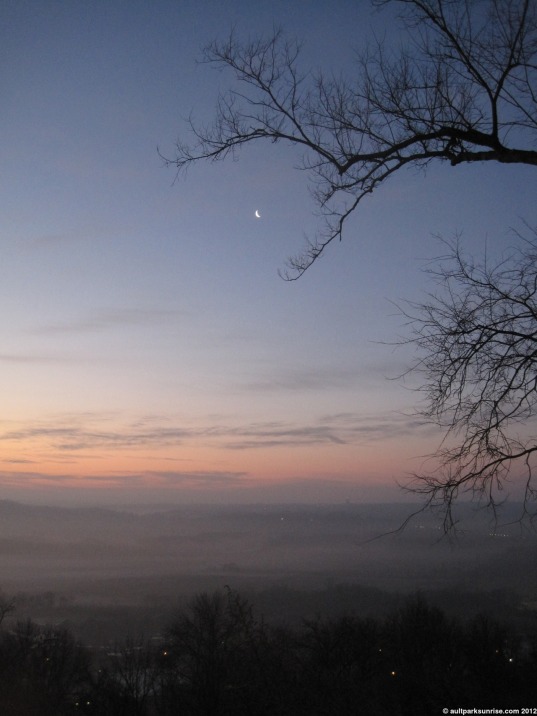 The misty little miami river valley with the moon overhead.

Early twilight colors behind a winter silhouette. I can’t remember the name of this plant, but it reminds me of either this pumpkin-flower plant, or the bush that harbors the aphid herding ants. 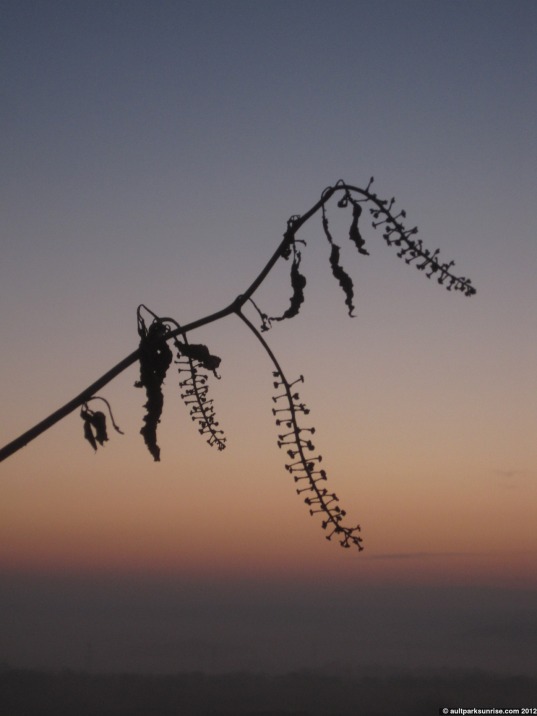 The muted misty backdrop of a humid twilight in Cincinnati. 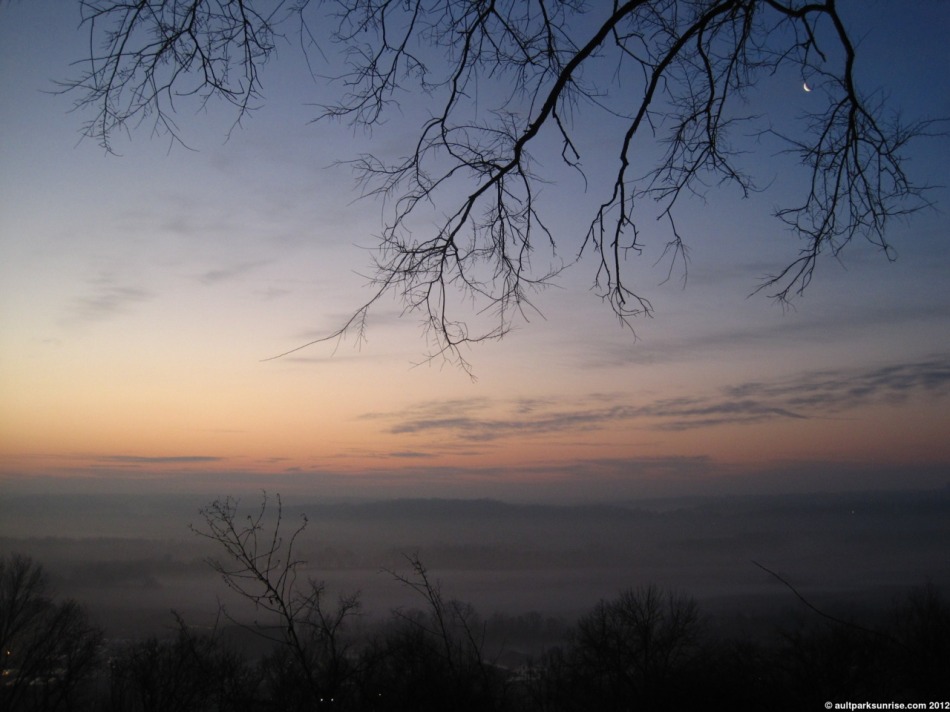 Mid twilight before Sunrise 145 over the Little Miami River Valley 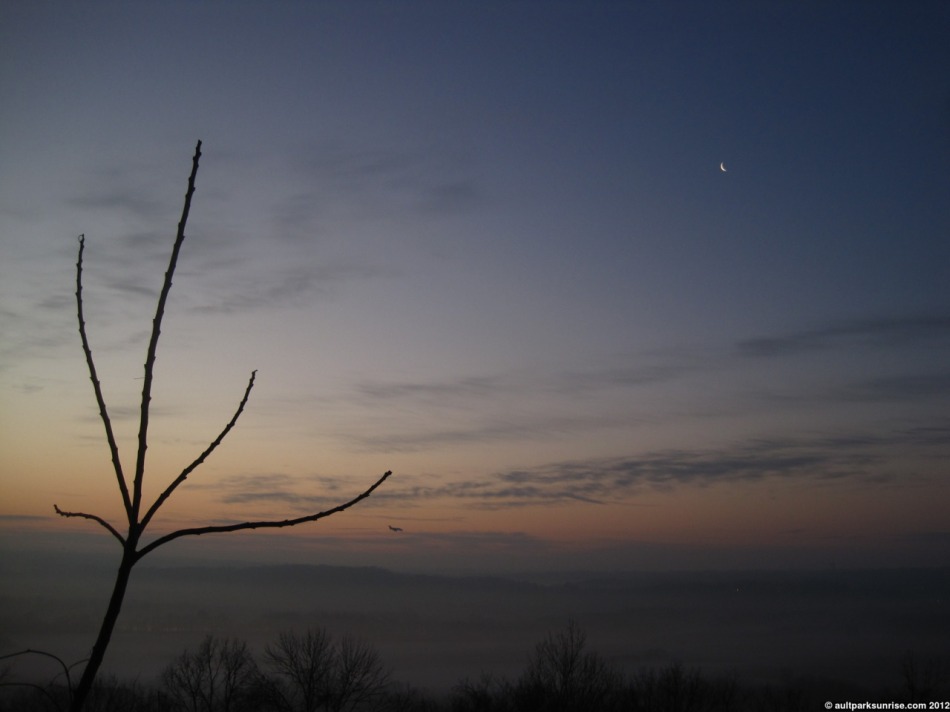 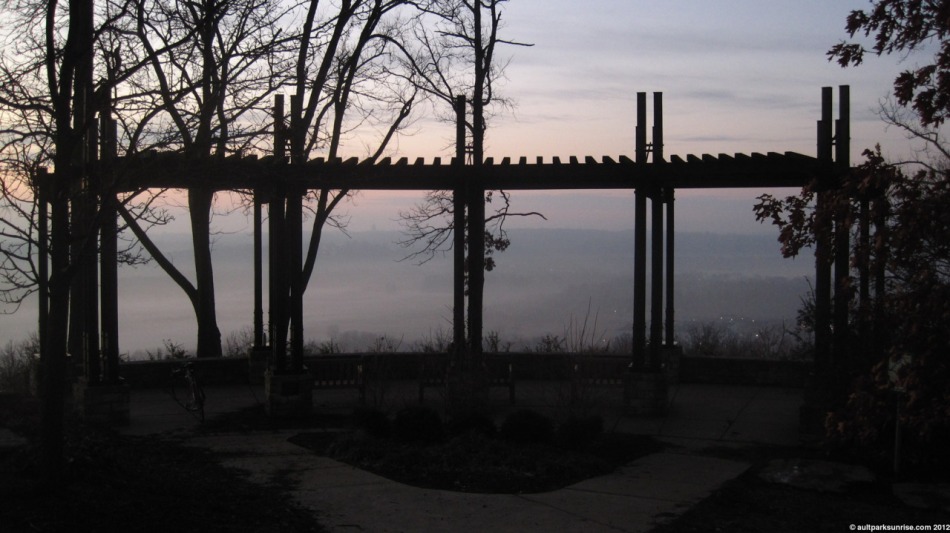 Heekin Overlook; a dark foreground against the bright misty valley.

Sitting on the bench, enjoying the Highlander Grogg coffee from UDF (featuring my thermos on the left side), I check my watch and note that it’s already 7:30am, within a couple minutes of sunrise. On these humid days the colors can be subdued (or stretched out over longer periods of time, depending on atmospheric conditions). I begin to notice a small kernel of pink light over the horizon that begins to slowly expand across the cloud line.

In reality it was much deeper than this picture leads us to believe.

A vertical shot of the impending sunrise over the valley. 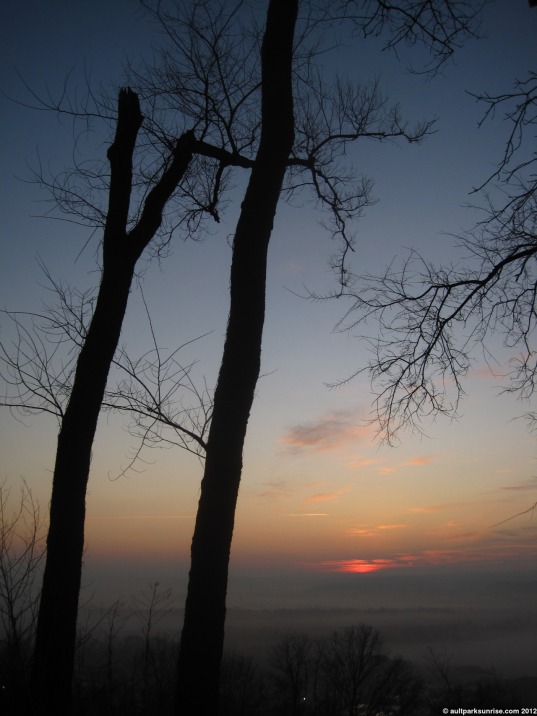 As the sunrise slowly begins to build, I take a few steps back and admire the twin trees against the subtle backdrop.

By now the sun has likely come up over the ridge line, but it is still hidden by the thick cloud layer somewhere in the distant valley.

A plane lands, a plane takes off against the misty, humid, winter sunrise. Have a great weekend everyone!

This entry was posted on February 17, 2012 by Ault Park Sunrise. It was filed under ault park, clear skies, sunrise, thick haze and was tagged with ault park, cincinnati, silhouettes, twilight, winter.