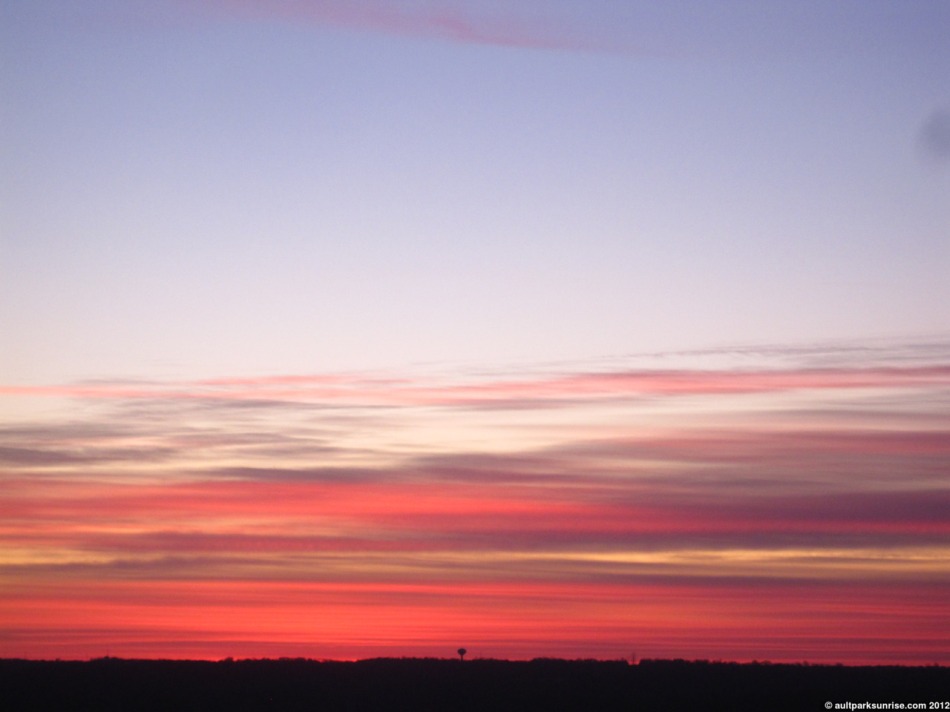 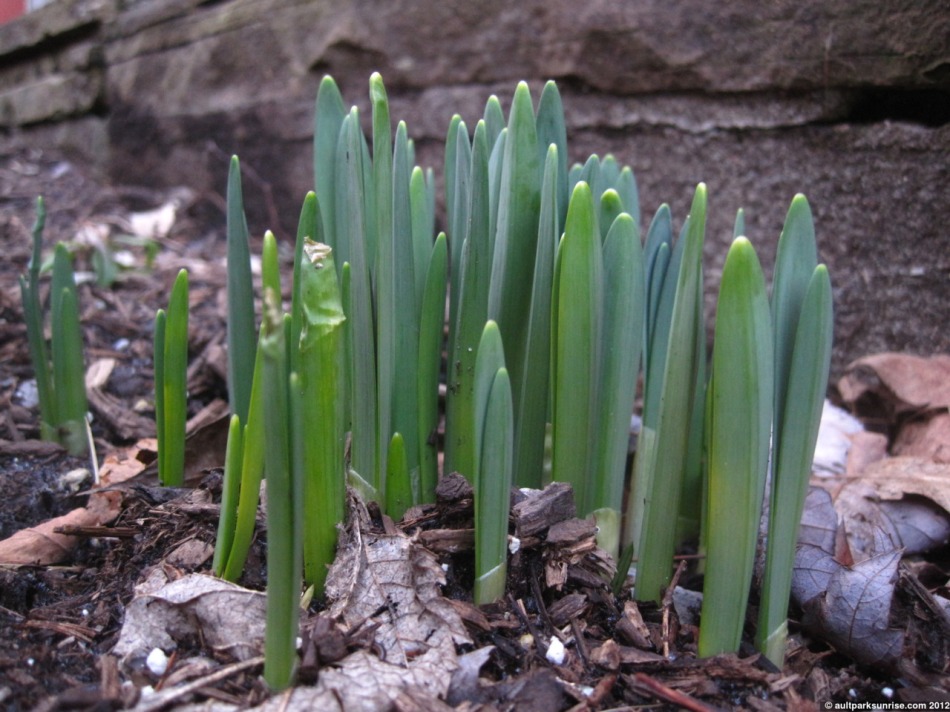 Some crocuses (or tulips?) coming up through the mulch out in front of our place. They’re a bit early (at least a month, maybe two); hopefully they don’t get killed by the next hard freeze!

After a week of rain and ice, this morning we finally had a beautiful clear sunrise. There was some intense wind activity yesterday afternoon that preceded a breaking of the overcast conditions in the tri-state area. The weather has held and it looks like we’ve got some great weather lined up for the next couple of days. It was a humid sunrise this morning and this was evident in the late-twilight orange/yellow/gray colors of the haze. The early twilight was another splendid magenta-filled canvas that slowly faded into a dull yellow/gray sunrise that was mostly blocked by a far-off cloud bank just above the horizon.

This morning we also have Guest Sunrise #5, with three repeat contributors. Tara shares one of her favorite sunrise pictures that was taken by her father in Exeter, Pennsylvania on November 13 1972. This is a special contribution and I am thankful that Tara chose to share it. The photo comes at us from just under four decades in the past. Thanks Tara!

Two of my old roommates have also shared some of their recent sunrise shots. Both Phil and Trent have been commuting by bike, although it’s a bit easier for Trent out in San Francisco to be consistent than it is for Phil and I here in the midwest winter :). Phil’s sunrise is from sometime last week when the weather was breaking and we had a nice magenta display. I’m going to guess it may have been Sunrise 138. Trent has shared two sunrises, both from different days. Trent recently purchased a commuter bike for his new job out in the beautiful city of San Francisco, California. He has kept me up to date (and envious!) of his new morning commute through the parks and bike trails of one of the most bike commuter friendly cities in the US. He mentions that as he leaves for work it is dark out, and by the time he arrives the sun is up. Recently it has worked out that the sun rises over the bay while he’s zipping through of the local parks. Thanks Phil & Trent for sharing!

PS: I added a new link up there on top titled “Random“. If you click it you’ll be directed to a random sunrise post. Enjoy! 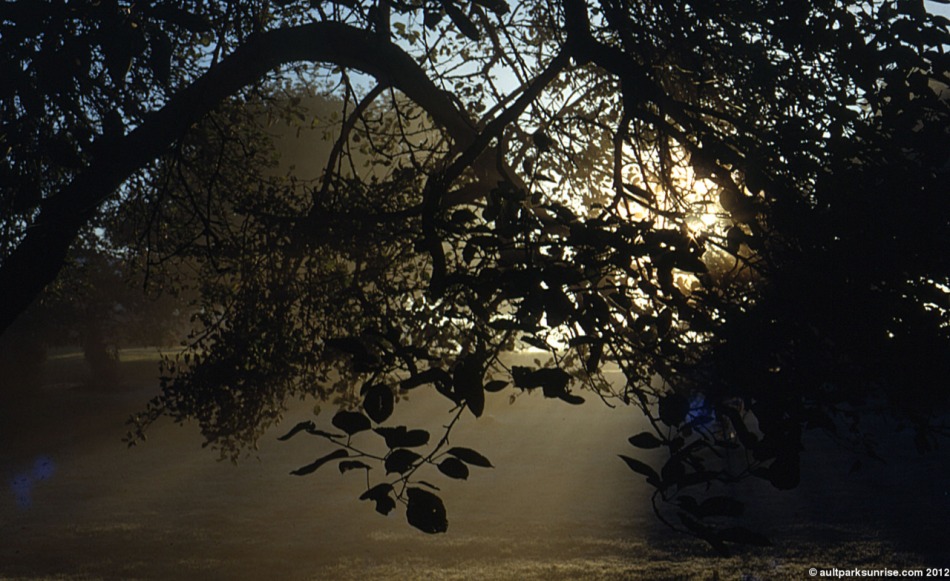 “My Papa took this picture on November 13, 1972 in Exeter, PA. The tree is a
big apple tree in our front yard. I checked with him and he said it was a
sunrise. I know he has more but I happen to have this one because I asked if
I could have it years ago. I also asked his permission to share this photo
with Ault Park Sunrise and of course he said yes.” 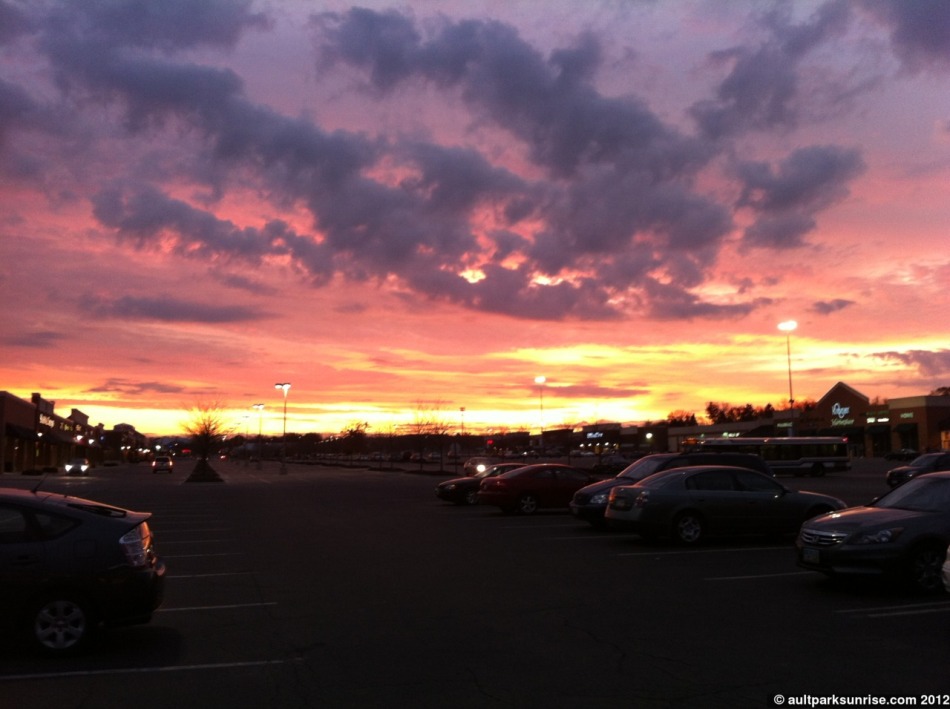 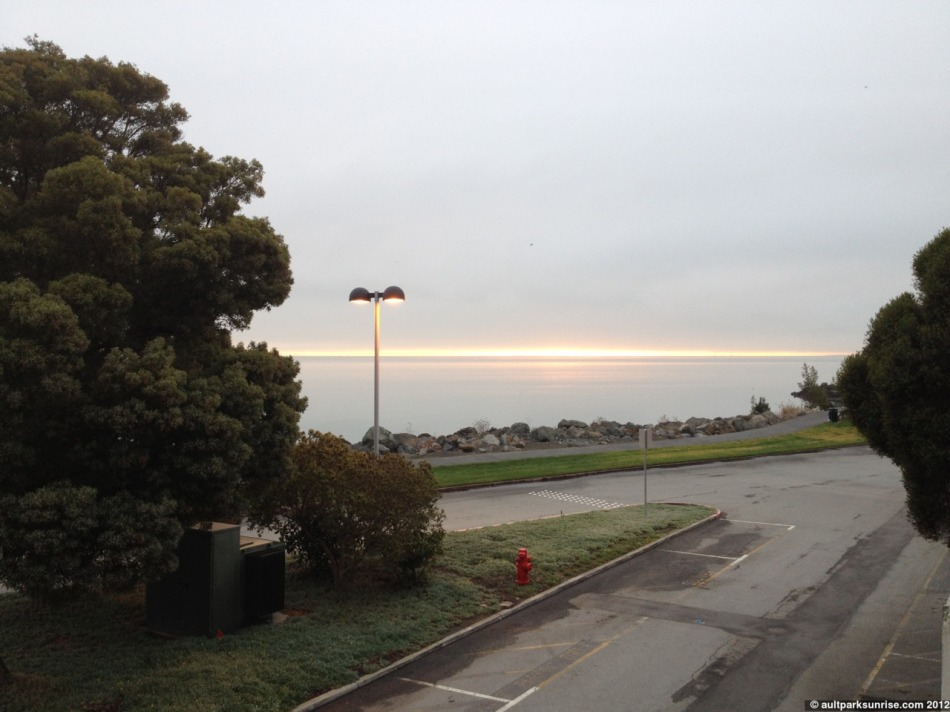 A sun rises over the bay city 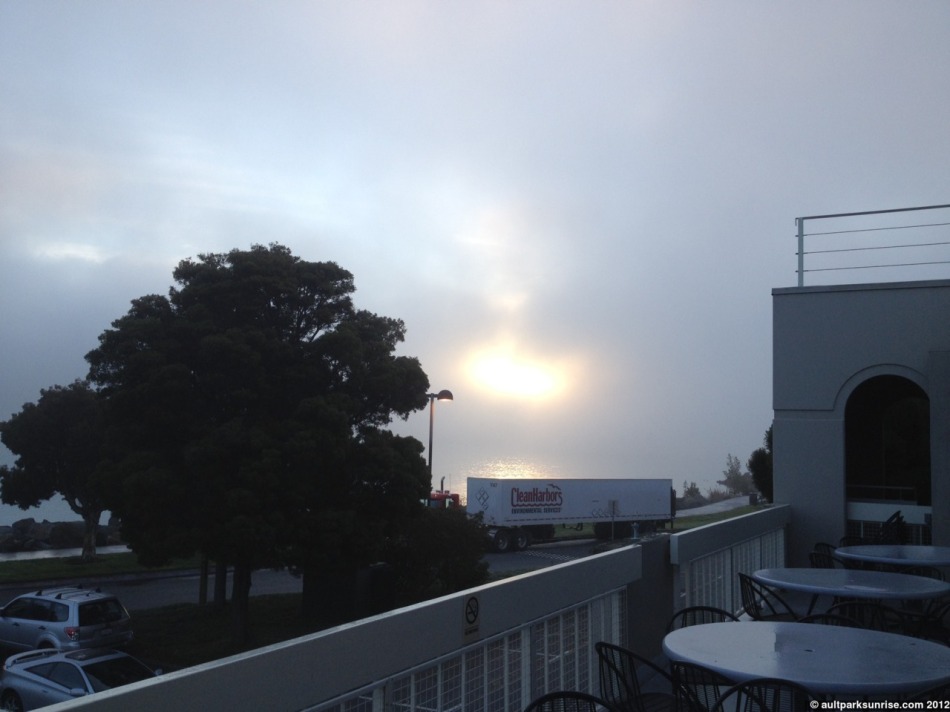 In Trent’s own words “iPhone does not capture the majesty of these sunrises”. Thanks Trent!

Onward to today’s sunrise over the Little Miami River Valley. 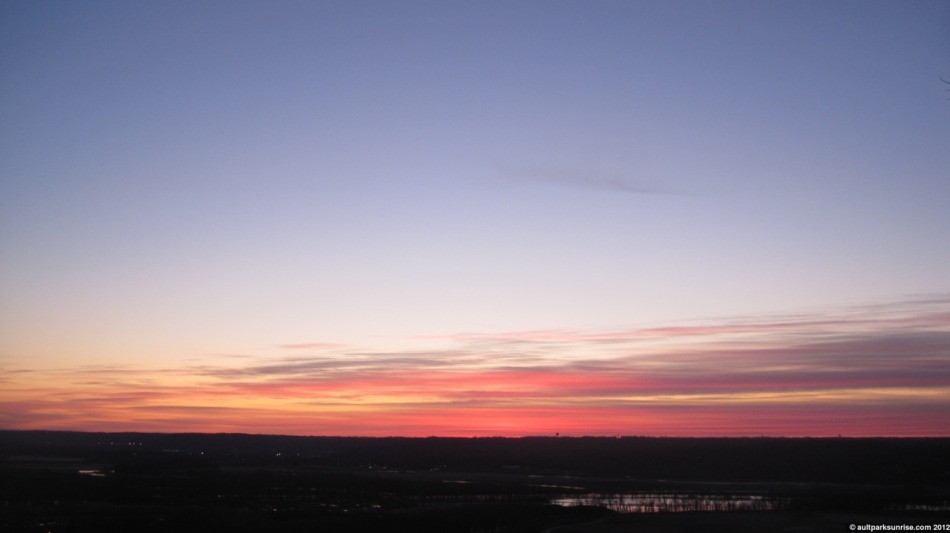 The twilight sky was humid with lots of magenta this morning. The whispy nature of the clouds added a smooth texture to the sky. 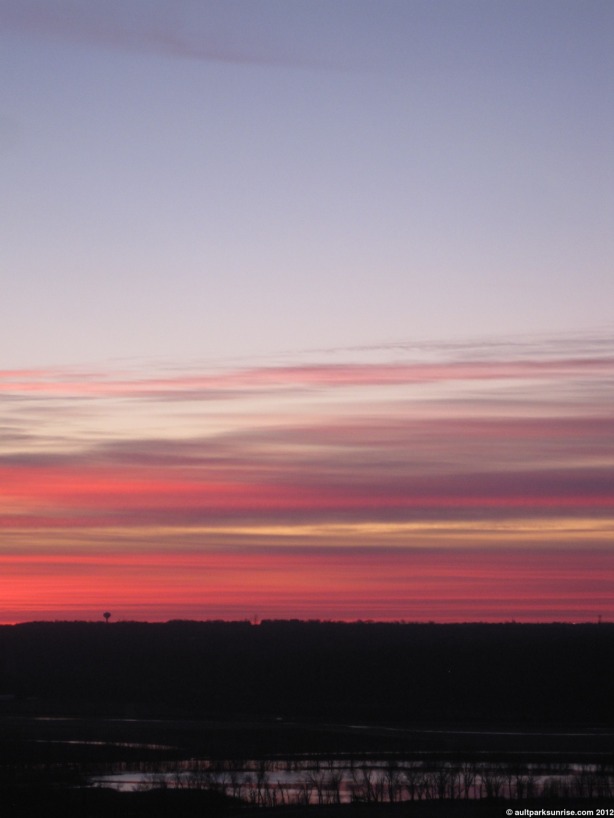 The Little Miami River reflects some of the morning colors down in the old pre-glacial Ohio River Valley. 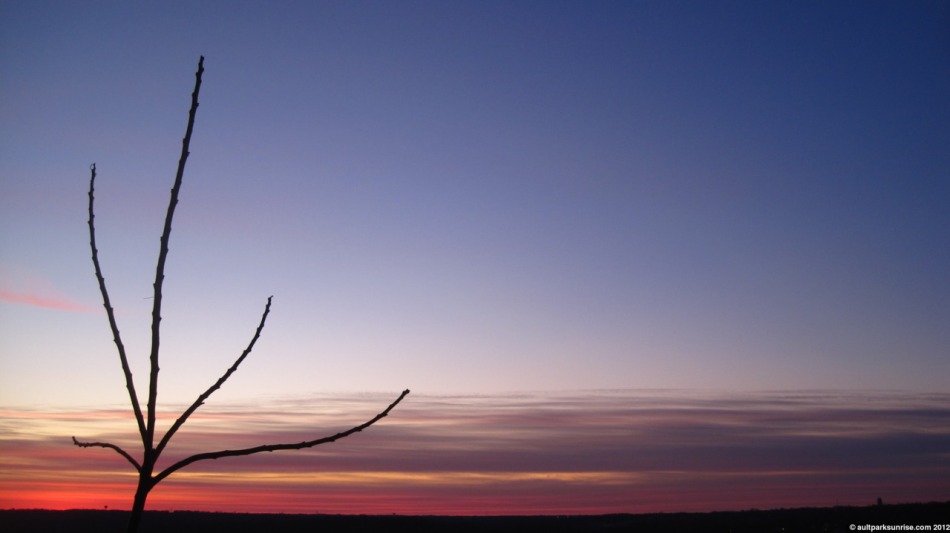 The Tree of Heaven silhouette against the late sunrise. Already the sun is beginning to slip back to the left, making me greatly appreciate that I have been able to get a hand full of pictures of this young tree over the past couple of weeks.

If you’re on the front page, please click to continue for the rest of this post. About 15 pictures total from Sunrise 141. 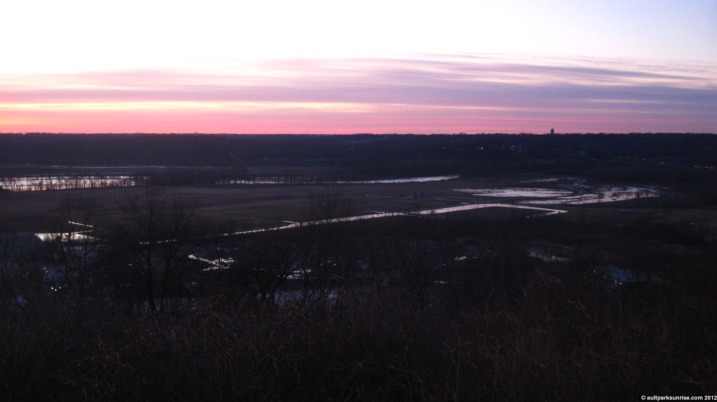 Down in the valley, Armleder Park is flooded once again. I’d like to get down there and watch a sunrise across the reflections in the temporary lake. Maybe sometime later this week. 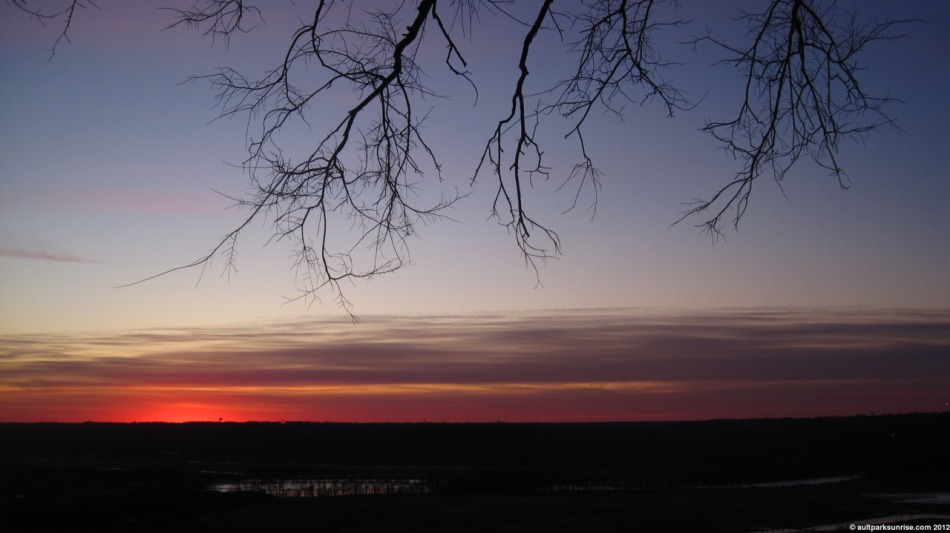 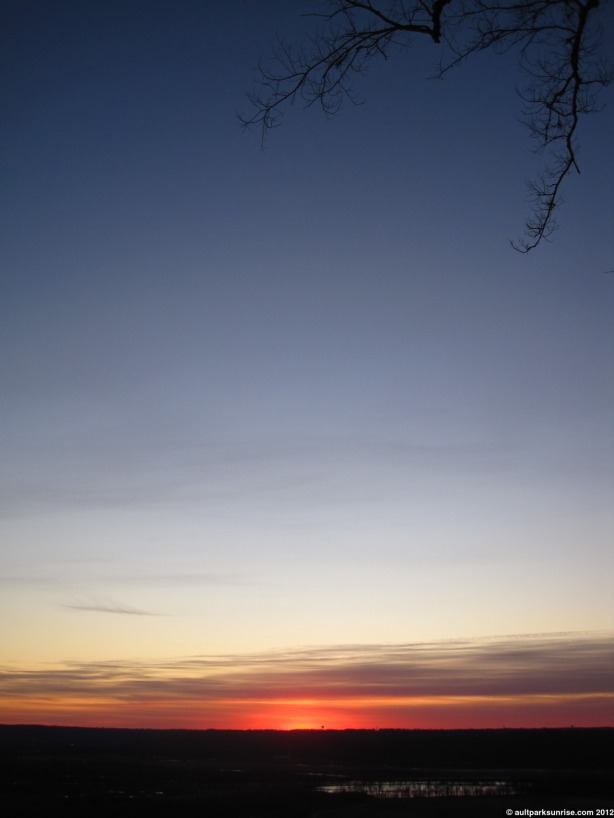 Vertical Sunrise @ Heekin Overlook. The pinks are starting to fade into grays. 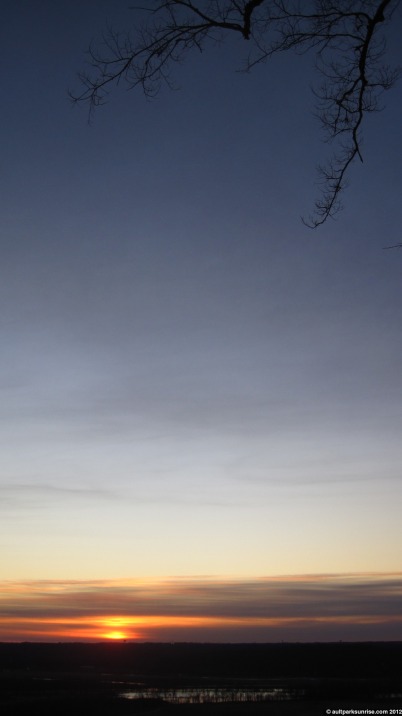 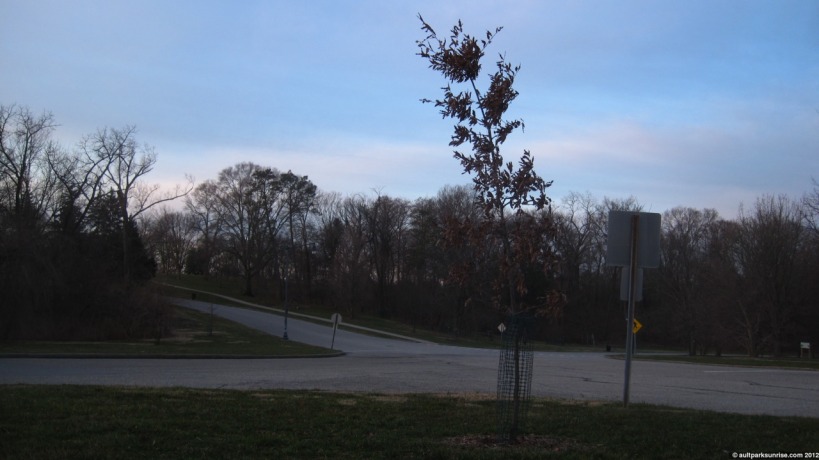 During the last icy sunrise, this maple tree was all whopper-jawed. Showing off its flexibility, it was almost bent around touching the ground. The young wood has recovered gracefully. Here she is from Sunrise 139: 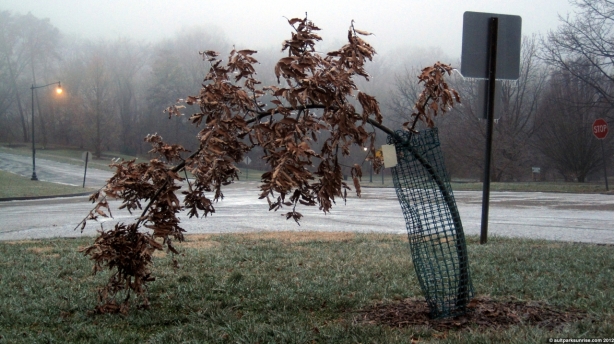 This entry was posted on January 29, 2012 by Ault Park Sunrise. It was filed under ault park, clear skies, sunrise and was tagged with ault park, cincinnati, guest_sunrise, silhouettes, twilight, winter.