The twilight sky before Sunrise 137

It “warmed” up a bit this morning to just under freezing, a brisk 30F. The sky was clear last night before bed, but by the time sunrise rolled around most of the sky was filled with clouds. The horizon, however, was mostly clear. The forecast for this week puts us with some rain tonight and hopefully some snow later this week. The clouds that started to fill the sky this morning have successfully blocked out the night skies as I write this post late in the day. (I had to make a trip to the dentist this morning which pushed my schedule behind quite a bit!). Actually the dentist visit went great. It was one of those things where modern anesthesia makes getting a cavity filled a mere inconvenience, where as 100 years ago it would have been a memorable event marked with lots of whiskey and excruciating pain.

While I drove out towards the Mt. Carmel office, I found myself winding through the Little Miami River Valley, upon which Ault Park and Alms Park sit. I have recently been in contact with a graduate student who studies the Ft. Ancient culture, specifically the earthworks and burial sites that were at one time located in the Little Miami River Valley. Hopefully we will be working together in the next few months as we piece together old documents that he has uncovered from the late 1800s. These documents were surveys of the valley and identified interesting ruins and burial sites uncovered during the development of the region. Just a few miles over in Mariemont, a large serpent mound was recently uncovered and it may be the world’s largest. Matt tells me that this area would have, at one time, been home to tens of thousands of mounds. How many are left after 200 years of development? It would be most excellent if we are able to locate some of these sites that have not been documented in recent history and help set into motion the necessary actions that would lead to their protection. It is fascinating to me that while I’ve been concerned with the last 150 years of history in this region, there is a much larger and older story that dates back several thousand years. Matt has identified several old buildings and landmarks that may go by different names today (or be gone all together). It is my hope that with the resources I’ve explored in developing this project I can help Matt put some of these historical landmarks into the context of modern day. There are some old estates that are referenced that have probably long since been sold to developers, and also lots of locations that are given relative to old rail lines, tresses, and stations that existed in this area in the 1800s. Stay tuned, it should be a fun project.

On to the sunrise! This morning’s sunrise was a strange one. The thick cloud layer over head broke right above the horizon. This affect is always interesting because it can expose the open atmosphere to allow the sunrise colors to become visible, but at the same time the puffy pseudo-cumulus clouds can be just as interesting to watch due to the nature of the shadow patterns that dance around while the sun is rising and the light is changing. The clouds take on this bright blue/gray color with sharply defined boundaries. It’s very hard to pick up on the camera, but with the human eye it looks interesting. Speaking of the camera, this morning was one of the hardest sunrises to get a decent picture of. The bright twilight sky was restricted to being just above the horizon, while the rest of the sky was dark with clouds. This made my little camera’s sensor very confused as to what its white balance and exposure should be. A more configurable camera would have come in handy. Oh well! I turned down the exposure so that the twilight colors weren’t washed out and away I went.

One last thing about the sunrise this morning. Right when First Light peaked over the ridge line, the park was bathed in this brilliant deep orange glow. I caught it on camera but, as usual, the picture doesn’t do it justice. It was one of those shades of color where my vocabulary simply is at a loss to describe it. A deep red/orange/neon/yellow. Very rich. 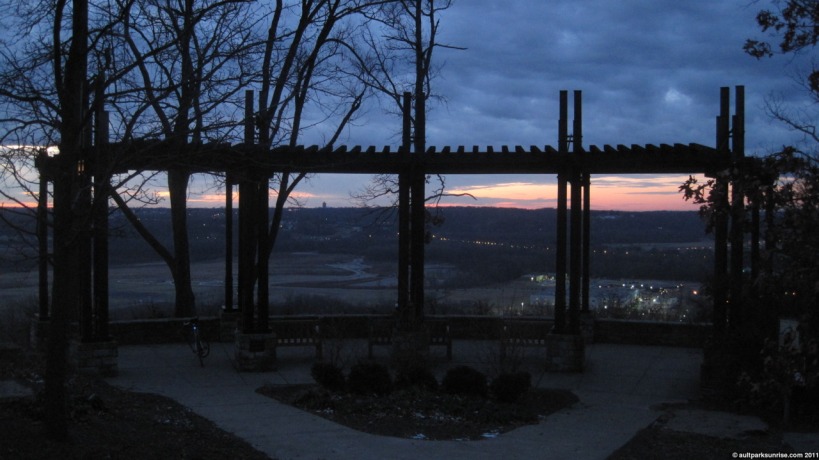 Heekin Overlook, 30 minutes before sunrise. Dark with a brightening twilight horizon that was difficult to capture.

This is like -1 exposure, about as dark as I typically am comfortable doing. That’s the only way I could get a picture without the entire horizon looking bleached out white! This is my new favorite sunrise target. It’s a tiny little “Tree of Heaven” that rises up in front of the lower overlook. I used to get a bit annoyed at it when I realized the sun was moving across the horizon and it would be in the way.

So I think this little guy is an adolescent Tree of Heaven. Wikipedia tells me its latin name is Ailanthus Altissima. Want to know something interesting, fair reader? I hope you do, because I’m about to lay it on you. The answer to a mystery I pondered earlier this year, coming together in a full circle of life. Ready for it? 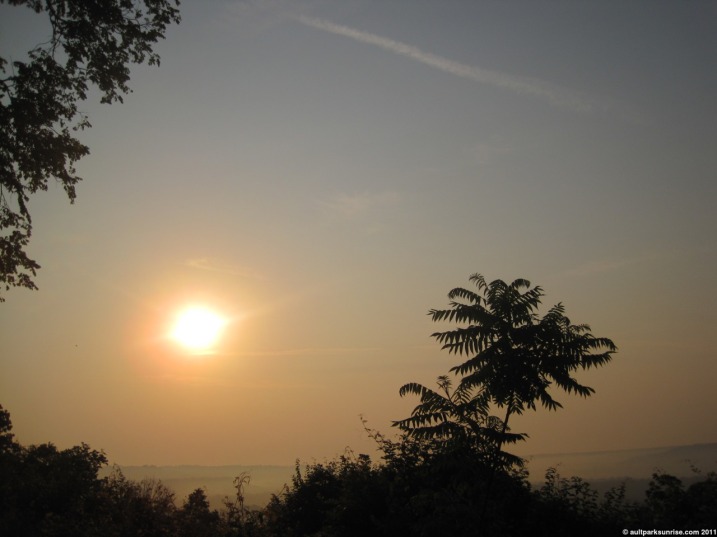 I just scrounged around and found a picture from Sunrise 48 that showcases this lovely little tree. Here she is (on the right) with a full coat of summer leaves, back in the middle of a hot and sticky day in Cincinnati. It’s also interesting to look back on this sunrise from the middle of winter. So much humidity. The sun rose that day with a shade of deep, blood red. Note how far to the left the sun is. 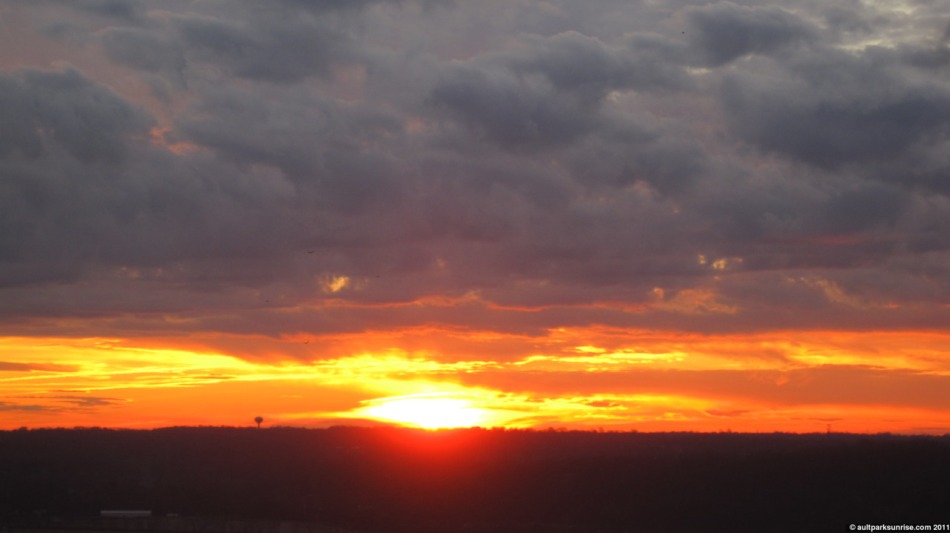 “First Light”. I could not, for the life of me, get a picture that didn’t include this bleached out white glow. In reality it was a bright and rich orange.

Reminds me of a stormy spring day. This is January, right? 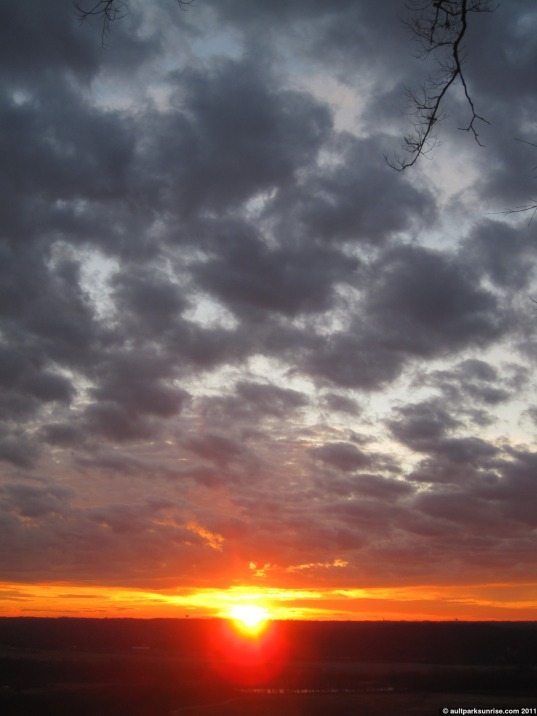 A vertical shot, looking out over the Little Miami River Valley

An attempt to capture that orange glow that was permeating across the overlook.

This entry was posted on January 16, 2012 by Ault Park Sunrise. It was filed under ault park, slightly cloudy, sunrise and was tagged with ault park, caterpillar, cincinnati, little miami river, sunrise, trees, winter.