Songbirds preparing for winter. The amount of bird activity in the park this morning was unusually high. Red headed woodpeckers, cardinals and blue jays, robins and mourning doves, crows, and chick-a-dees to name a few.

The trails are closed for deer hunting… I’m assuming bow only? The six deer I saw this morning didn’t appear to be very concerned.

The forecast must be a bit harder to predict during the seasonal change. This is two mornings in a row now that I would have expected a decent sunrise but instead was met with a dark cloudy sky. The forecast had mentioned a 38% cloud cover which should have given me a beautiful dynamic sunrise sky. Instead I got a dark winter atmosphere that eventually broke a little bit as I was heading home.

In fact, it was so dark this morning that half of my pictures seemed to come out a bit blurry. Oops! Some days are like that though and it really makes me appreciate the brighter days that make the pictures turn out so well! That’s the one thing about this camera, for all it’s great qualities, that could use some improvement. It’s hard to get a decent macro picture in low light, even while resting the camera on the ground. This is a bit of a “light” post because we’re about to head up north for some good old fashioned family Christmas festivities. Thanks for reading!

Be sure to check out about halfway through this post where I cover some light ideas regarding the vineyard history in Cincinnati and a future “Cincinnati Vineyard Sunrise” series.

For the rest of this post, including all 17 pictures and the old stone structures at Ault Park, please click to continue if you’re on the front page! 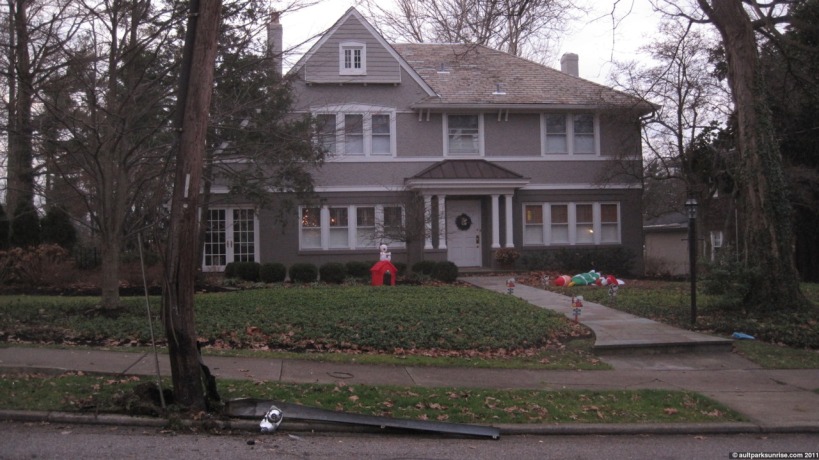 Someone took this pole out and left behind pieces of their lighting system. If this were CSI we’d know the address of the person who hit it within hours! By the time I was on my way home, some guys from the city and Duke Energy were already checking it out. 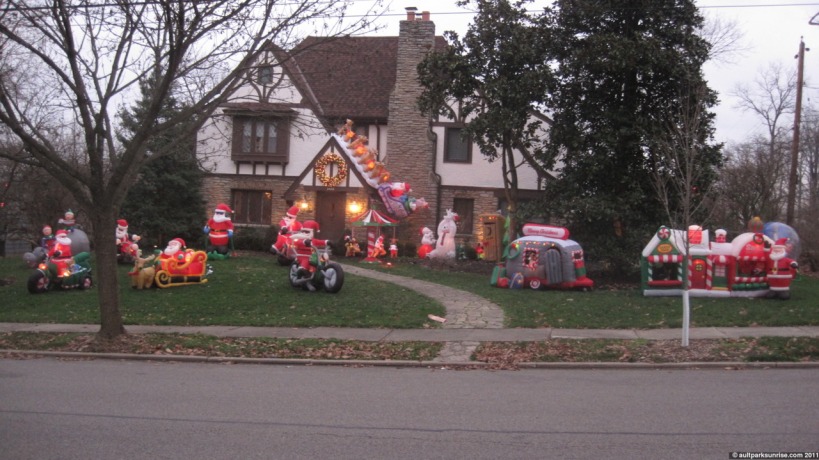 This house has it goin’ on! Their front yard is lit up with inflatable Christmas decorations. 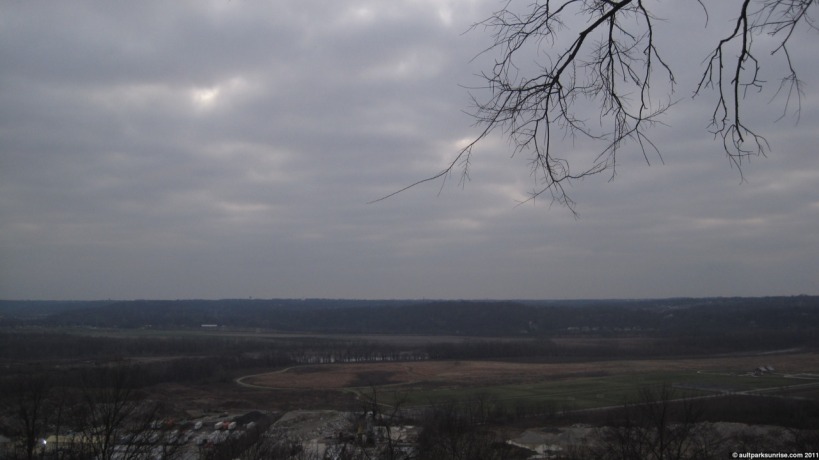 Upon arriving at the overlook twenty minutes before sunrise (did I mention I was pretty excited for this one?), I found that the atmosphere was dark and gloomy. Boo!

A hot air balloon slowly drifts across the horizon at sunrise. I bet they’re as disappointed as me!

I swung around under the pavilion and took some time to check out this old cellar that has always been intriguing to me. I’ll revisit this cellar with more detail at a later time but I have a feeling that it is connected, somehow, to the heritage of Ault Park’s vineyard history. Alms Park has a similar stone wine cellar with almost identical stone work.

Check out the similarities in the stone work below with the stone work in the Crusade Castle Vineyard building which dates back to the 1850s, 60 years before the creation of Ault Park during the stormy political climate leading up to Prohibition. For good measure, here’s a picture from last spring of the Alms Park wine cellar I’m referring to, built in 1869. Also of almost identical stone work.

(This is the wine cellar @ Alms Park). For the entire post (by far the most popular post on this project), check out Sunrise 25 here.

In the spring I plan on doing a “Cincinnati Vineyard Sunrise” series where I’ll cover in depth the history of Ault Park, Alms Park, Eden Park, Crusade Castle, and whatever else I can dig up through the context of the pre-prohibition Cincinnati culture. There’s a lot of small clues around and I don’t think there exists a single resource pooling them all together 🙂

The cellar. It sits quietly under the pavilion with no marker. It’s obviously been “stoned” up but at one time was probably storage. The fact that it goes into the hill side is a strong suggestion that it was once a temperature-controlled wine cellar. 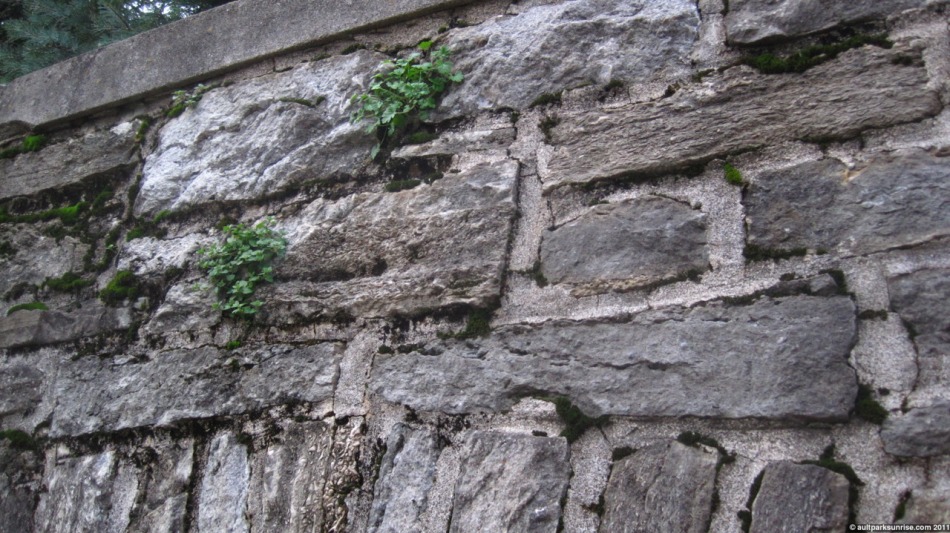 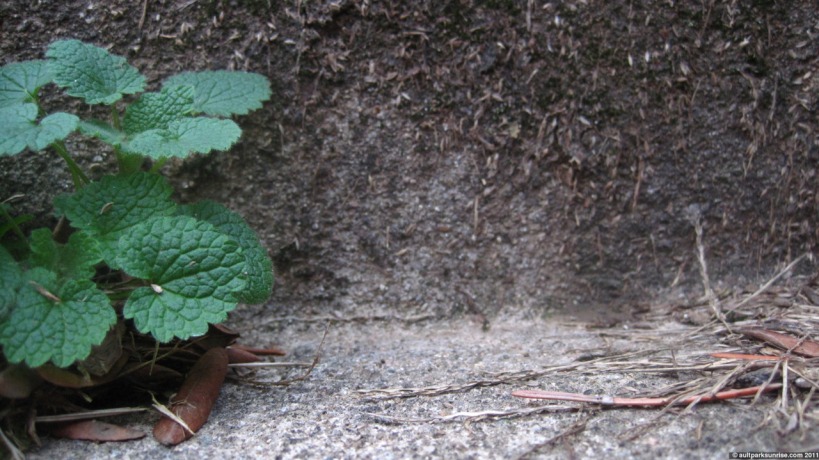 A blurry attempt at a texture picture. I’ll save it for another day when there is more light. Macro shots were impossible this morning!

I took this picture with the intention of having a second picture that was incredibly close up of the tiny green plants, some of the few plants remaining that thrive in the cold season. Unfortunately I couldn’t get a picture that wasn’t blurred.

I continued on past the stone cellar and I noticed that the sky was starting to break up. About time!

Here we are, at the northern tip of the park by the road that goes back towards the park service building. In the summer this meadow is full of local wild flowers and insect life. Now it’s been cut back. But the real reason I took this picture is that I recognized a pattern here. See how the “old trees” are all around the outskirts of this meadow? It’s the same story up by Heekin Overlook and also at Alms Park’s overlook. I believe, and this is completely unbased, that this may be the site of one of the original vineyards. That would explain the open southern facing hillside with no old tree growth. Perhaps this was the second site of a trellis system? I believe with certainty that the Heekin Overlook site and Alms Park site were locations of the vineyards, but this is the first time I have considered this meadow which is located on the northern side of the pavilion.

Lots of deer life this morning. I had six deer sightings! On the way in I passed three doe (apparently that’s the correct word) but I couldn’t get close enough to snap their picture. Over here by the overlook, three young bucks were hanging out. That’s the interesting thing about these deer – they stick together by sex until mating season comes around. 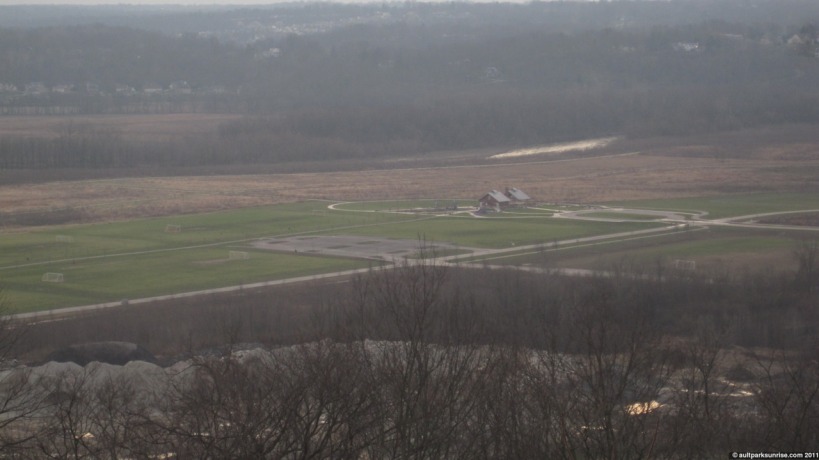 A final shot across the valley at Armleder Park. A bit of a haze permeates through the air.