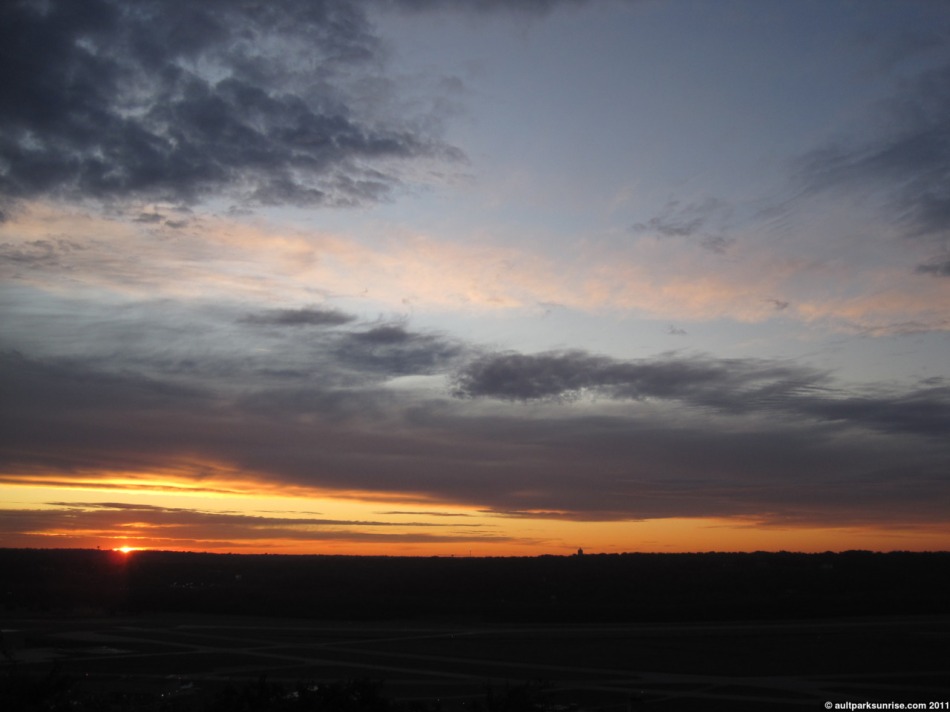 This morning’s sunrise 100 was, finally, a healthy well-rounded autumn sunrise. It seems like we’ve had about two weeks of overcast and rain. I spent the past three mornings up in Columbus, OH for my good friend’s wedding. Now that things have calmed down a bit, I’m looking forward to grabbing as many Autumn sunrises as I can get my white-knuckled hands on. The forest has already started the process of changing into the warm colors of fall, and the weather has taken a surprising dip into ice-cold temperatures. There is a specific species of maple that blasts out this intense orange/yellow color for a few days every Autumn. With all the rainfall this past year (we’re looking to break the record), I’m expecting a great turnout. So far no signs of them.

By my estimates, this morning’s pre-sunrise temperature was in the mid 30s. It was so cold that I was finding myself happy to have lips because my teeth felt like they were going to freeze off if I smiled too widely at slowly rising light in the upper atmosphere of the clear blue sky. Although that may have had more to do with a certain too-cold drink I had a the wedding celebration than the actual temperature.

This morning’s cold air provided the perfect setup for a calm mental state. When one is out on the bike in the early morning air, climbing up a 300ft ascent to the top of Alms Park, it really does no good at all to harbor second thoughts. You really just have to put it to the back of your mind and be thankful that the nissan thermos is full of 26oz of fresh steaming coffee. Although it does help to think about the possible acquisition of winter biking gear.

The sunrise was one of the best kinds and it felt very much like fall. The upper atmosphere was clear and a deep blue and there was a light slurry of clouds just above the horizon. It was a nice hybrid that had the best attributes of a clear sky (the show starts early with subtle lighting 20 minutes before sunrise, a full color palette) and also a lightly cloudy one (deep purples, shadows, various cloud formations). 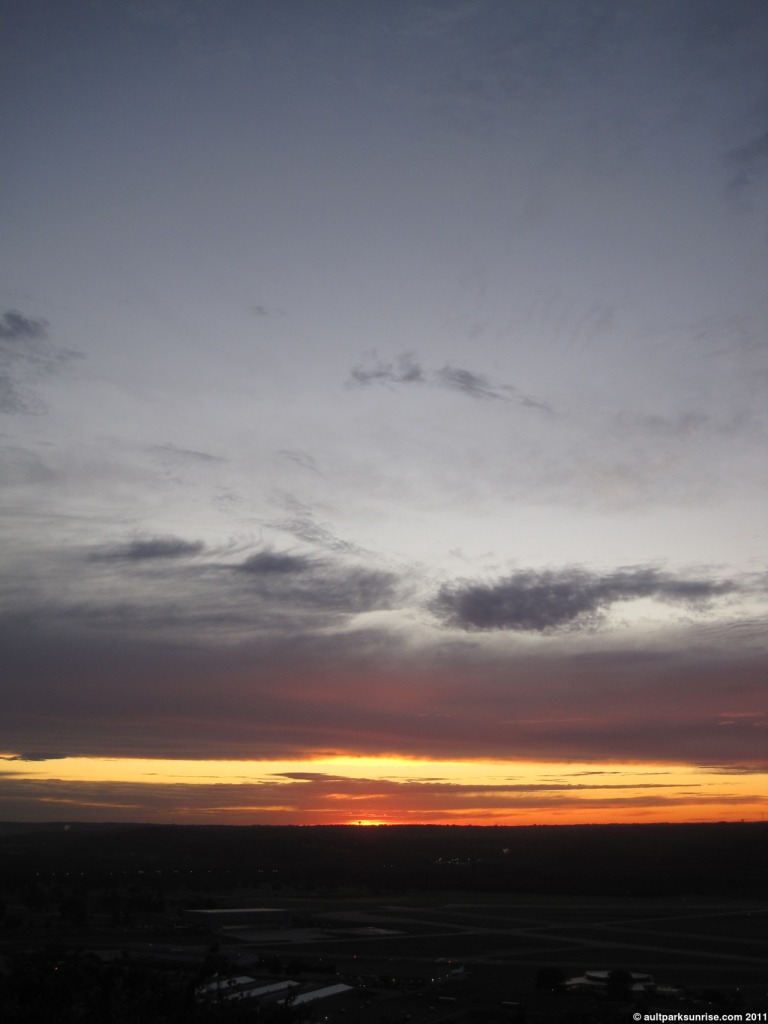 The late dawn sky over Lunken Airport at Alms Park in Cincinnati, Ohio. 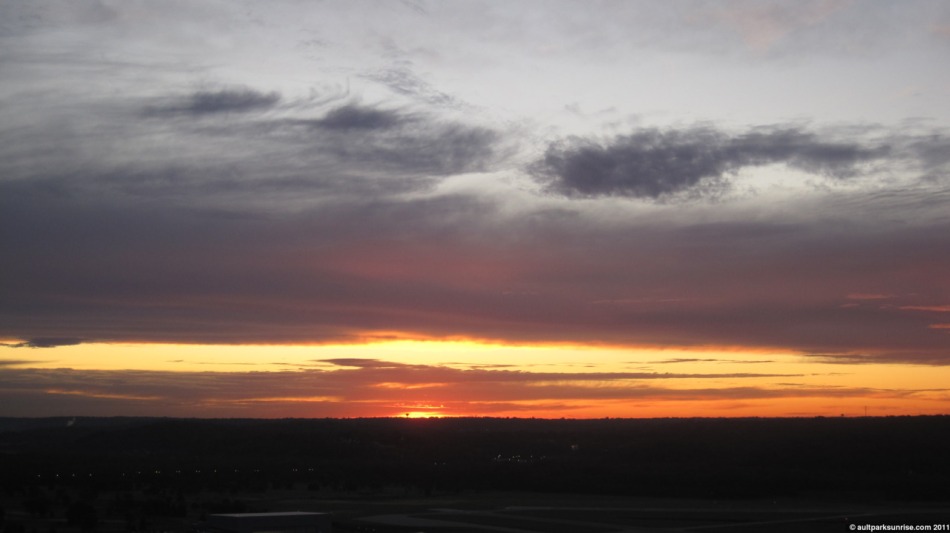 Can you find the water tower?

Take your seats, ladies in gentlemen. T minus 1 minute until sunrise. 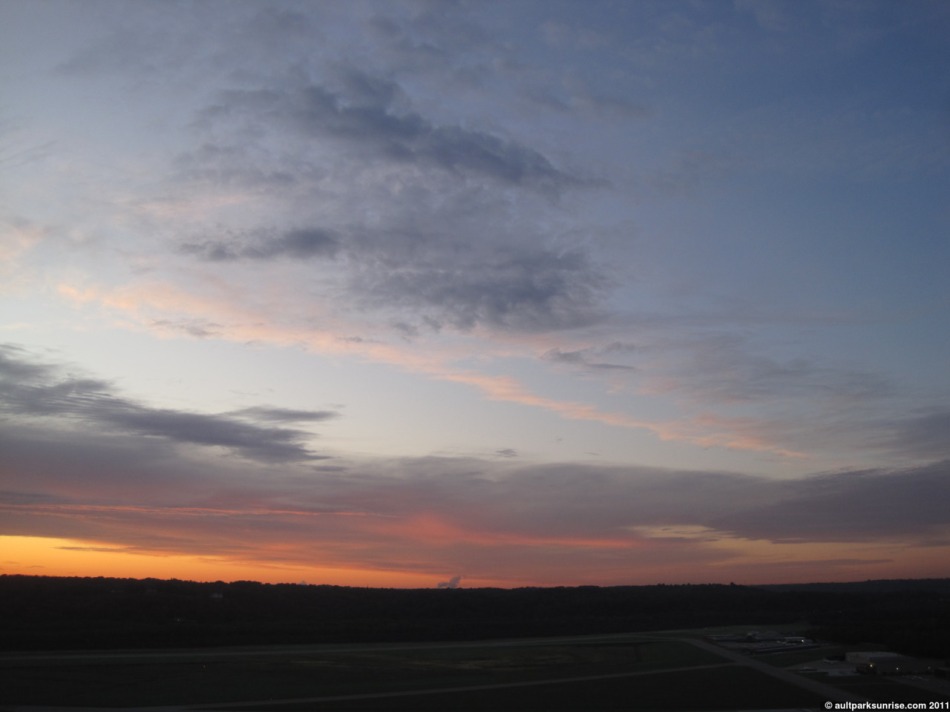 It’s hard to capture all the colors in a single picture. To the east, the sky was cycling through some fusia and light purple before fading into a blue gradient. 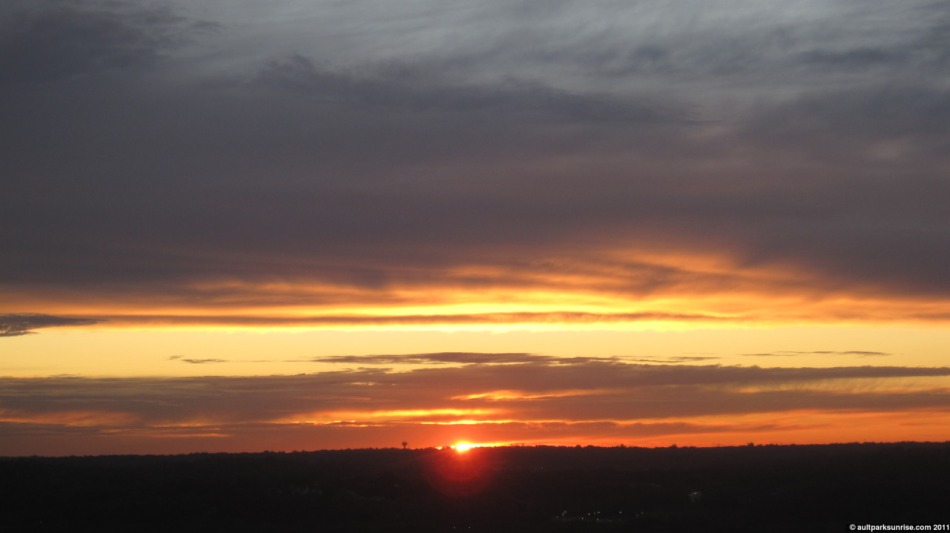 Upon further examination, the water tower isn’t as close to the sun as I thought. That would have been a fun picture (a zoomed up sunrise with the sun exactly behind the water tower on the horizon); looks like I missed it by just a few days.

Looking South/West towards the Ohio River 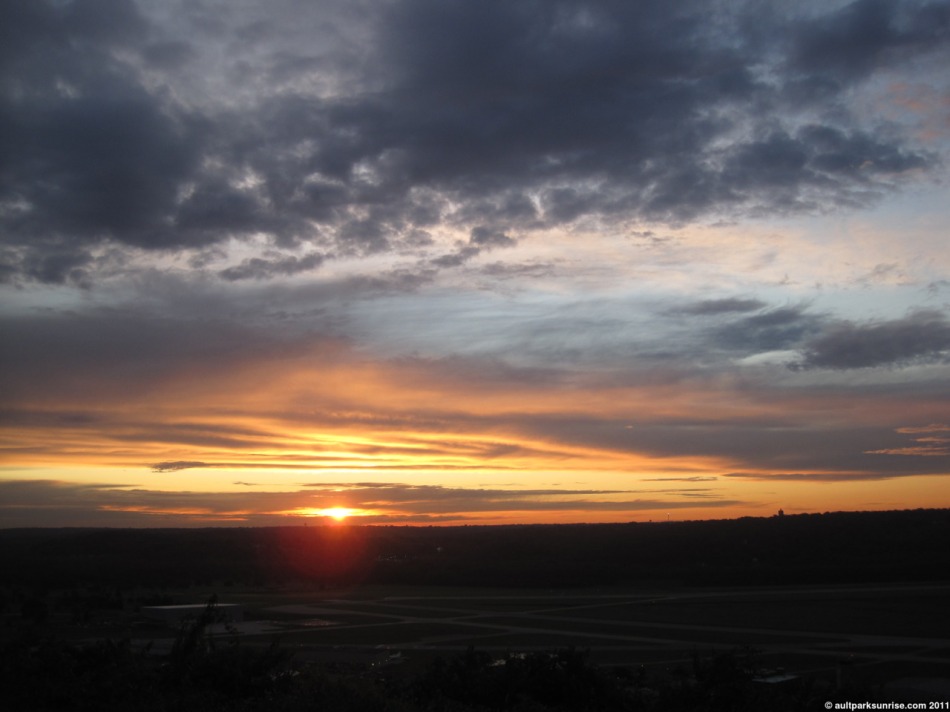 There were several different “species” of cloud formations in the sky this morning. 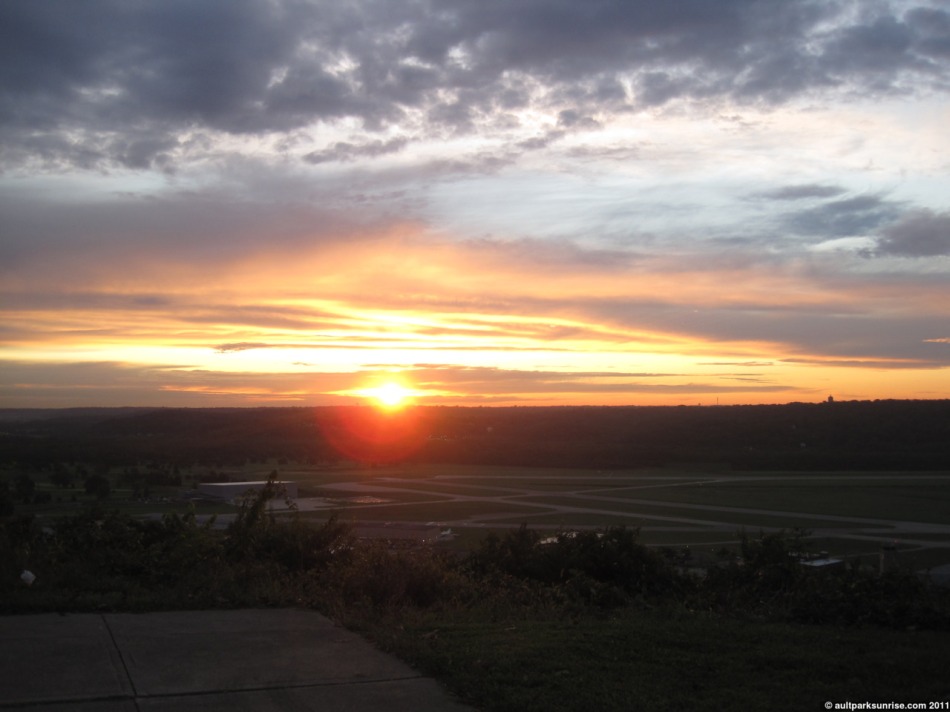 As the sun came up over the eastern ridge line, I already started to feel warmer. 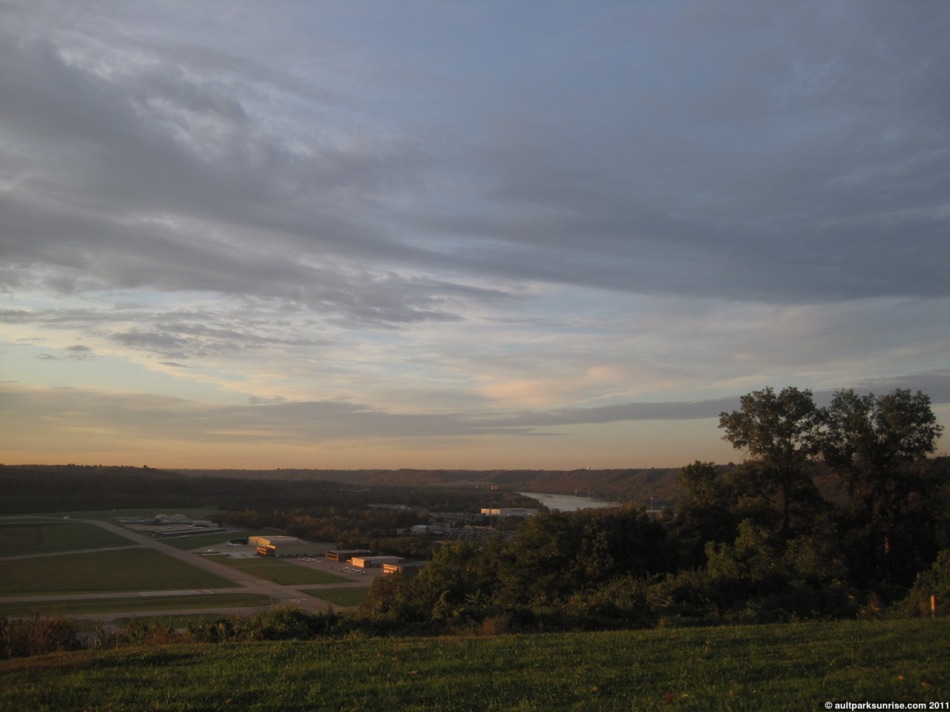 Once again, looking South/West towards the Ohio River.

Just before heading out I noticed the third plane of the morning beginning to taxi. Lunken Airfield was busy this morning.

After we got home from the weekend of celebration, I took a quick stroll around Mt. Lookout just before sunset. I got my first dose of the icy chill, but at least I knew what to expect for this morning!

Last night at Ault Park, just before sunrise. The lighting is inverse from what I’ve come to expect just after sunrise 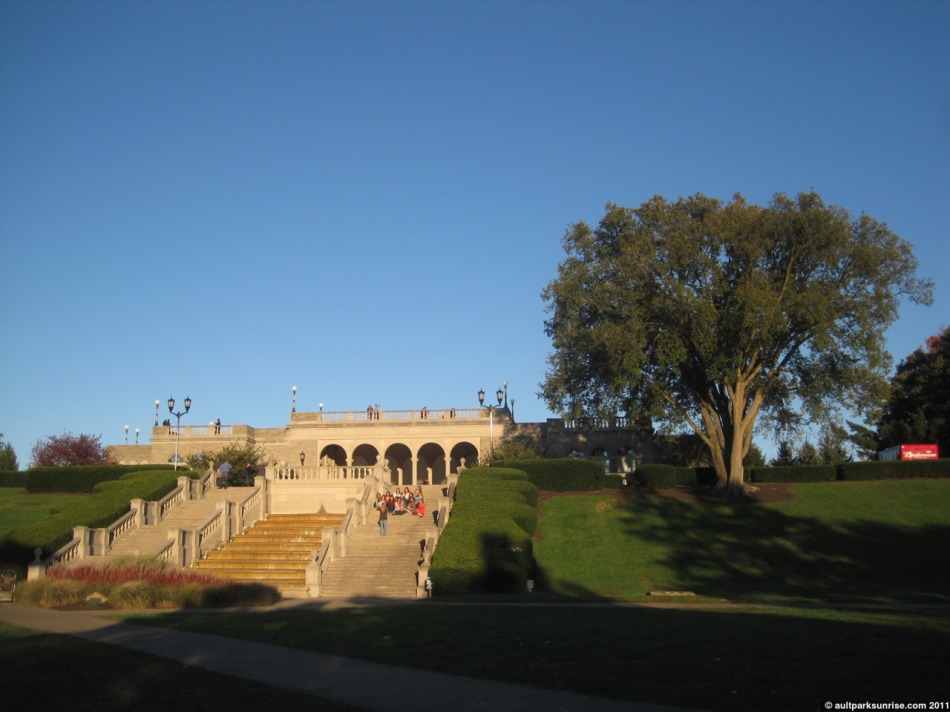 A picture of people taking a picture. We can also see the Budweiser truck in the top right, a left-over from the Reggae Run! We missed it, unfortunately, but there’s always next year! After checking the website, it looks like everything went well. Over 4000 runners converged on Ault Park to run down the mountain and back up in easily the steepest 5k I’ve ever ran… although that isn’t saying much considering the bulk of my 5ks were spent up in the western piece of flat Ohio farmland during my cross country days in high school.