The trusty old steed on the Lunken Loop. 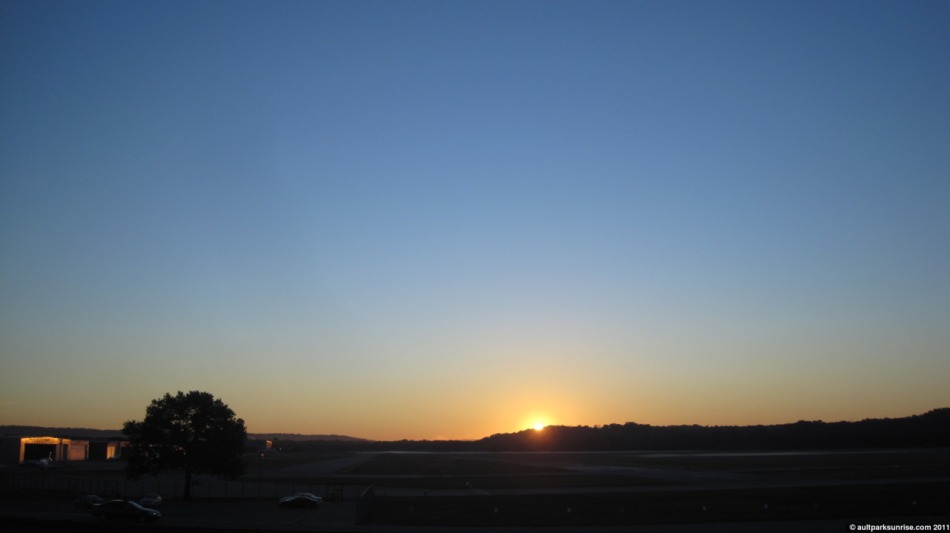 I really like this picture because the sun is just barely creeping over the ridge and hasn’t drowned out the CCD sensor on the camera, yet.

This morning was an experiment in the appreciation of dawn. I’ve been showing up to the sunrise a few minutes late over the past couple of weeks and I wanted to take the time to take in some of the subtle colors of the atmosphere before the sun comes up. I picked an excellent day to do this because the sky was cloud free and crisp, allowing the pre-sunrise light to accent the clear atmosphere quite well.

15 minutes before sunrise, the sky was already becoming nicely illuminated.

At 6:15am I pulled myself out of bed with the intention of catching the sunrise and opening act down at Lunken Airfield. I’ve been a bit lazy lately, allowing myself to snooze from 6:00am when my alarm goes off until 6:35am. With the sunrise being even later, around 6:42am, I have started getting comfortable with sleeping in a bit. Well, not today! 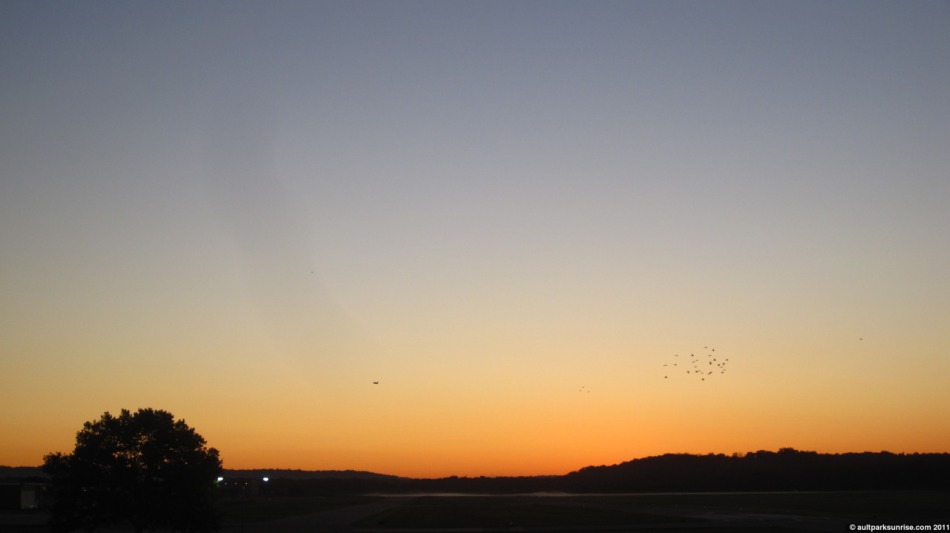 A plane taking off with a swarm of birds getting ready for the day.

I rode down Mt. Tusculum into East End and arrived at Lunken Airfield at about 6:35am. The sun has crept further to the right along the horizon. Interestingly enough, this means that at Ault Park’s Heekin Overlook, the sun is coming into view without being obstructed by the ridge to the left. At Lunken Airfield the sun has moved from the clear opening on the horizon to behind the ridge to the right. Although, to be fair, there is no bad location down at Lunken Airfield! Due to the sun coming up behind the ridge, “true sunrise” was delayed by about 18 minutes. This gave me a full 20 minutes to enjoy the subtle lighting of the beautiful clear blue sky over Lunken Airfield. I haven’t been this early to a sunrise for a long time, I’m embarrassed to say, so it was a great change up in the routine.

Look at those skies! No clouds.

This morning was chilly! Holy crap. I think it was seriously like 55F down in the basin. I could have worn a sweatshirt and been just fine. My ears hurt when I got back home from the cold! The cold air, however, made for a beautiful bright clear sky sunrise. The sunrise was a brilliant bright blue color and the skies were crystal clear, likely a side effect of this cold front. The pinks were almost non-existent, as I’ve come to expect in a sky with no clouds, and the sun came up over the ridge blasting a powerful yellow light. 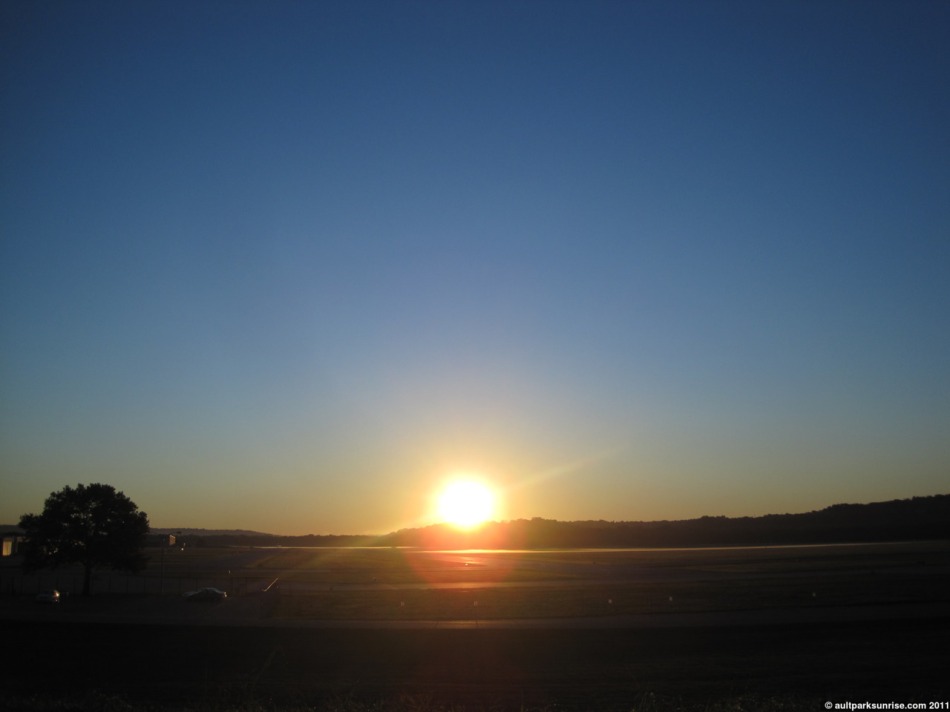 The oranges fade away quickly as the atmosphere takes on a full blown yellow sun light color.

One of the neat things about this morning’s sunrise was the bird activity. As soon as it became obvious that the sun was going to be coming up in about 5 minutes, the field seemed to explode in airborne activity. At first I could see swarms of bats flying about, likely grabbing a final snack before retiring for the day. There were also swarms of sparrows, swallows, and robins. Oh, and also airplanes. The airport was busy this morning.

A helicopter lands just before I head back to Mt. Lookout 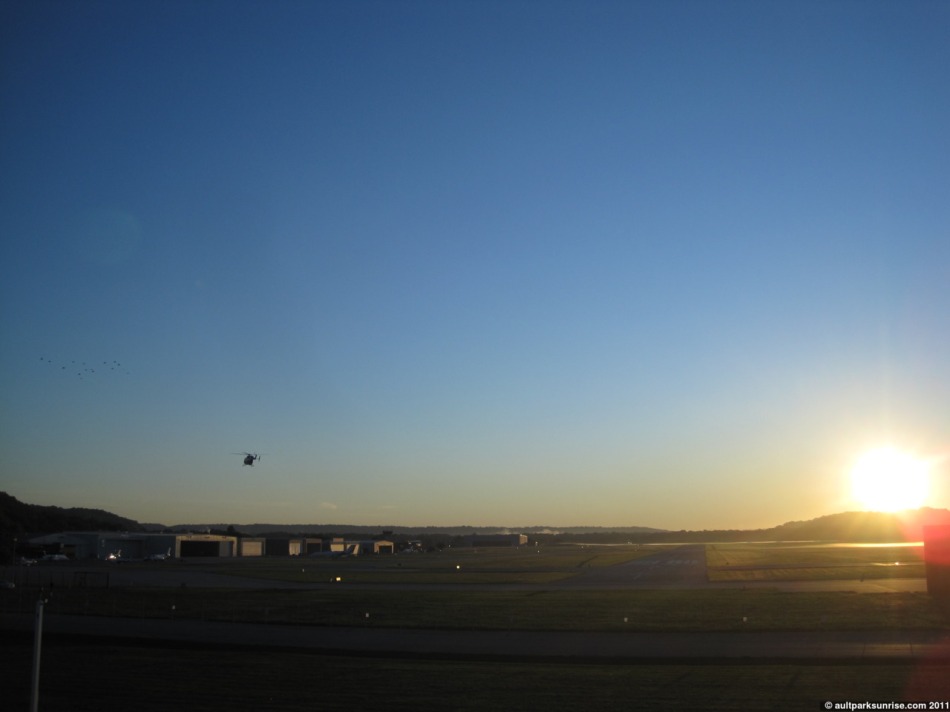 The helicopter lands at Lunken Airport

This entry was posted on August 11, 2011 by Ault Park Sunrise. It was filed under clear skies, lunken, sunrise and was tagged with bicycling, cincinnati, lunken, summer, sunrise.