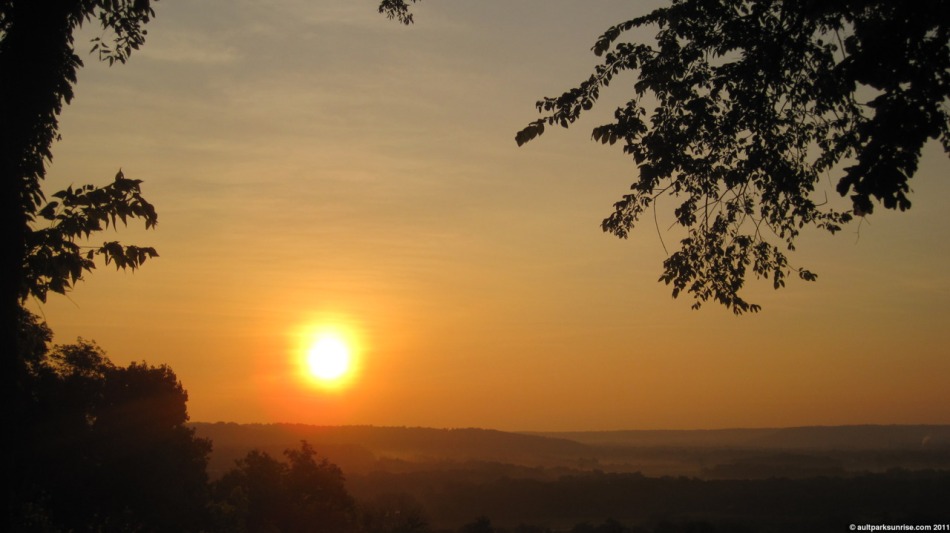 Misty valley under an orange sunrise. This was taken during that peak sunrise light time – about 40 minutes after the sun crests over the ridge.

This morning I decided to kick it old school. Go back to the roots, if you will. Recently I’ve been diversifying the sunrise locations quite a bit, and it has been great overall. This morning I biked up to Heekin Overlook at Ault Park and just sat on the bench listening to the birds and collecting my thoughts at the end of this beautiful summer week. The air this morning was almost cool, I’m thinking around 68 degrees. It was pleasant to say the least.

The sound-scape was a bit different this morning compared to the sound-scape that I remember from a typical April. The birds and squirrels were not as loud, for one thing. The nests have been built, mates have been found, and most of the birds and local animals are either caring for their young or preparing for their young’s arrival. There were no loud mating calls as I’ve come to expect over the past few months.

One thing that was different, however, was the presence of several kinds of woodpeckers. They were making the strangest bird calls, and one even startled me with its surprisingly loud burst of song. There was a large wood pecker of some kind (couldn’t tell what her colors were) hanging out on the dead oak tree by the overlook. It is obvious now that the dead oak is providing a great spot to find wood peckers. As the wood starts to rot, the insects will take over the process of breaking the organic matter down into less complex forms so the rest of the ecosystem can reclaim it. In the meantime, the wood peckers are probably here to stay. There was also a small little species of woodpecker that was flittering around the trees, although now that I think about it she may have been on the hunt for cicadas, not bugs. Maybe it wasn’t a woodpecker after all…

The sunrise was a beautiful clear summer sunrise with not much humidity. The warmth of the sunlight was apparent just minutes after dawn. I remember predicting, back in April, that the summer would be full of “boring” clear-skied orange sunrises. This is a true prediction because indeed most of these days that aren’t buffered on either side by a storm system have been clear and orange. And while I’ll say they’re no where near the level of complexity that became the norm during the stormy season in the spring, they’re still a sight to see. An interesting part about this specific kind of sunrise is that the sky can turn into this deep blue slurry of wispy clouds. It seriously looks like some kind of painting. With the deep orange gradient provided by the low sun, the colors of these clear morning sunrises are rich and textured. I’m still (1400 pictures later) experimenting with the exposure settings of the camera to figure out the best way to capture the colors. Sometimes the camera is set too low, leaving out the hills and making the outer edges fade into a deep sea blue. Other times it can be too high, bleaching out the subtle oranges and turning them into a featureless white.

A plane coming into Lunken Airfield at sunrise.

Early dawn at Ault Park, looking over the Little Miami River Valley. We can still see the pinks of the sunrise. In this particular sunrise, where there are few low lying clouds and not much mist, the pinks give away to the oranges quickly. They don’t hang around for long. 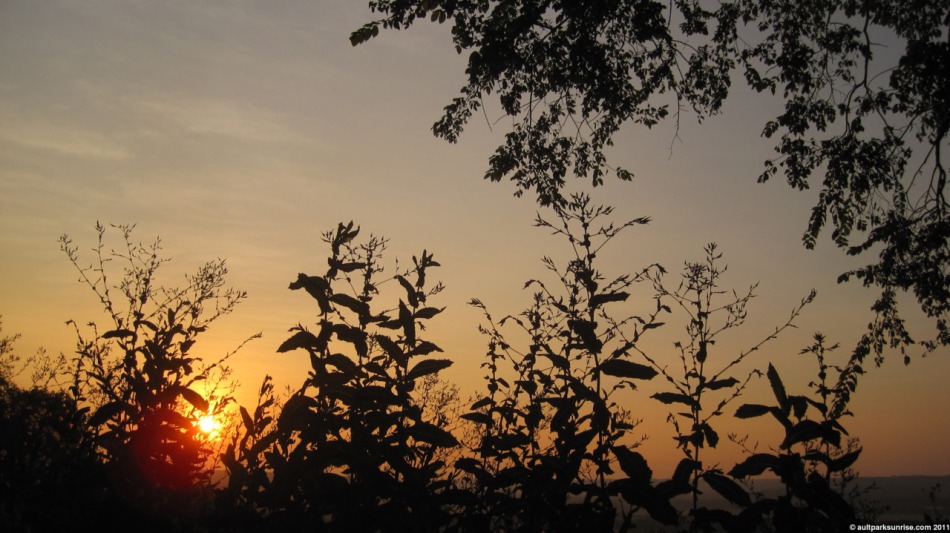 The weeds have turned into bushes and I find myself wondering if it is “correct” to chop them down or leave them to grow and flower. Do they not have the same rights as any other plant growing in the park? As humans we certainly make decisions as to what plants we want to see in our organized and designed gardens, but around the edge of the park where the forest begins to reclaim our manicured lawns, the first plants to colonize the new land are, of course, weeds. And these weeds are strong, large, and lush from all the rain we had in the spring. They don’t seem to be minding the gaps between the occasional summer storms.

As a completely unrelated side note, I’ve started experimenting with a new time management system called Pomodoro. Maybe I’ll explain it more later in detail, but it is worth mentioning that this specific post was done in exactly one pomodoro (which was my goal). Yesterday’s took two due to all the extra pictures. This is helpful information because while I purposefully didn’t take as many pictures today, I ended up filling the post with more text. And without feeling the rush of “oh crap this post is taking way longer than I expected”, I feel like my writing style was a bit more relaxed and reflective. Very therapeutic, in only 25 minutes.

This entry was posted on August 5, 2011 by Ault Park Sunrise. It was filed under ault park, clear skies, sunrise and was tagged with ault park, cincinnati, sunrise, weeds.