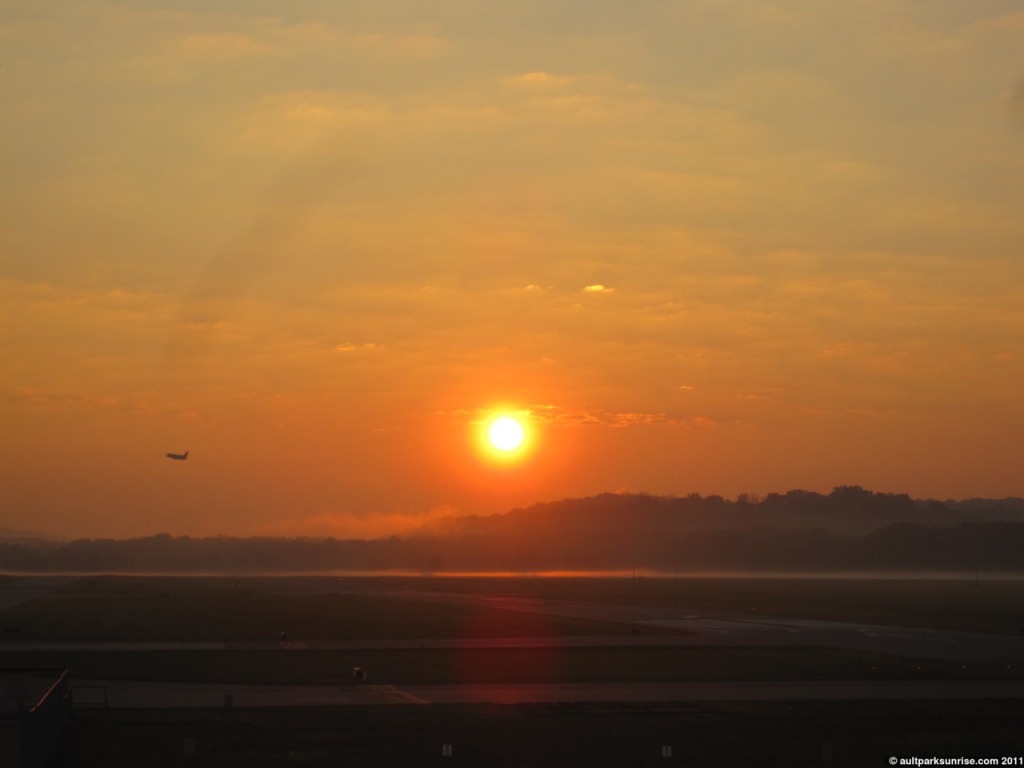 A plane takes off into the sunrise. Yesterday morning not a single plane took off from Lunken as I was looking down from Alms Park. And there’s that weird artifact again on the top left of the picture. It must be internal to the lens. 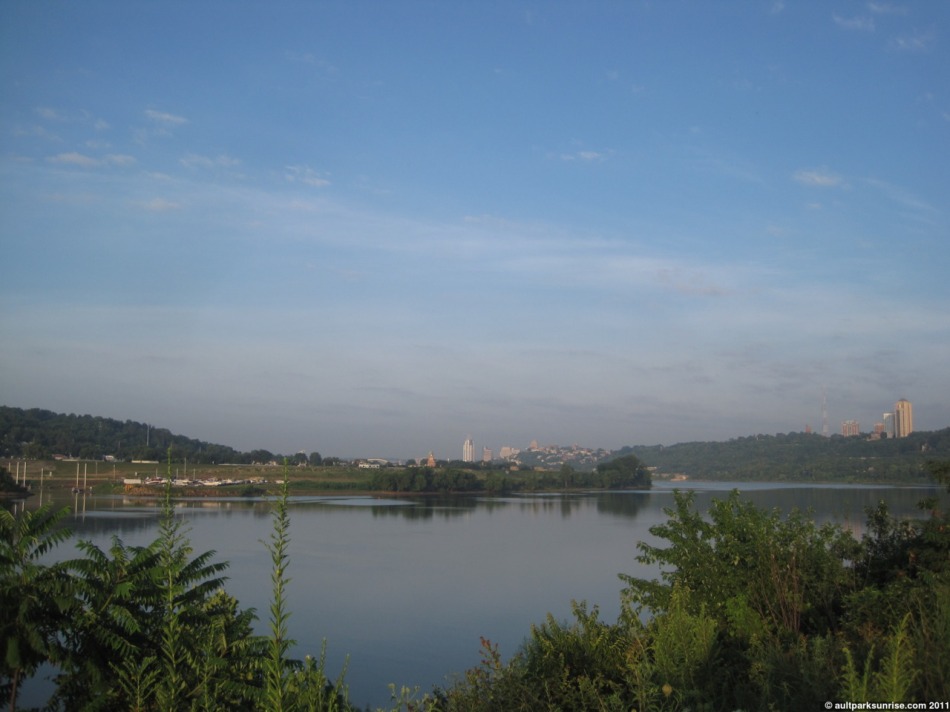 A view from Eastern Cincinnati on riverside road 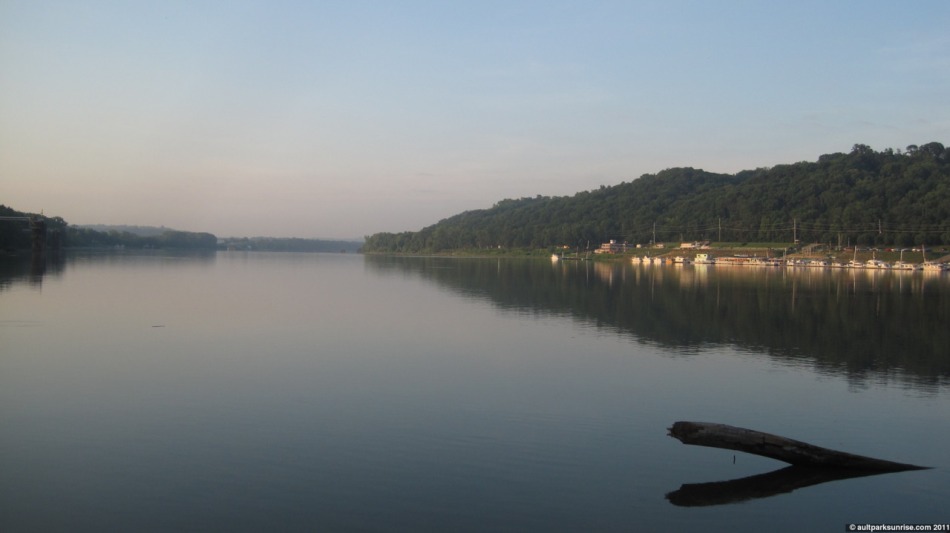 Looking up the river towards Lunken Airfield at the Ohio River Launch Club.

I’ll be honest, I was pretty excited for this morning’s sunrise. After missing the first two mornings this week, and getting a stormy overcast sunrise yesterday, I was ready for a beautiful clear summer sunrise. The forecast last night said no rain with 30% cloud cover. The sky was clear and the clouds didn’t show up until about an hour after sunrise. I made it a point to get up early, explore as much as possible, and build my work commute into the sunrise bike ride to save time.

The sunrise time has crept up to 6:40am, a time that is a full half hour later than the 6:10am sunrise that I came to expect in mid June. My alarm is still set for 6:00am, although recently I’ve been snoozing for about 20 minutes. This morning, however, I decided I was going to make the best of the late sunrise time. I packed up all the things I needed for work (mostly just an extra set of clothes, along with my lunch) and rode out towards Lunken Airfield with the intention of getting down into the basin by sunrise time. By skipping the whole “come home after sunrise” thing, and instead heading straight to work via a bike commute, I had a full two hours to be out before arriving at work by 8:30am. I explored a bit more of the western end of East End, checked out Fuel – the coffee shop on riverside I’ve always been curious about – and managed to slip into traffic just past rush hour to arrive in Silverton, OH with little trouble. It looks like I put in a total of 14 miles today, although it feels more like 6.

I’ve discovered an important thing about cycling. If you keep yourself at about 60% output (rather than 85-95%) you can keep going forever, it feels like, without really getting too winded. I think that is important. There is a movement in cycling culture called “slow riding”, and it usually is alluded to being a kind of European style of cycling. You can see it all over urban landscapes – but is it really new? Either way, it’s new to me. I call it European because the European bike culture in general is much more developed (in more cities, at least) than the average bike culture in the US. Either way, I understand that the average bike that is used for every day commuting in a European city like Amsterdam is often an old heavy comfortable steel bike. Anyway, this whole “slow riding” thing can be experienced by the weekly “Slow Ride Cincinnati” group that meets every Thursday Night at 6:00pm in Hoffner Park. I keep meaning to go but have not made it over there. The whole premise is that the fastest rider should be going as slow as the slowest rider. If someone gets a flat, everyone stops and helps out, etc. The whole philosophy really resonates with me because when I bike, even while commuting, the journey and the terrain, neighborhoods, history, buildings, people, urban design, etc. are all as much apart of the experience as the muscle strengthening workout. In the article I linked previously, the author is surprised to find that he doesn’t lose much time in his commute by traveling slow (usually he meets up with the fast guys at stop lights anyways), but he does arrive at work less sweaty and less tired.

Anyway, on to this morning’s sunrise. I parked it up at my favorite bench located just on top of the bike trail that runs along the levee to the Little Miami River. There were several joggers and bikers out for this sunrise. 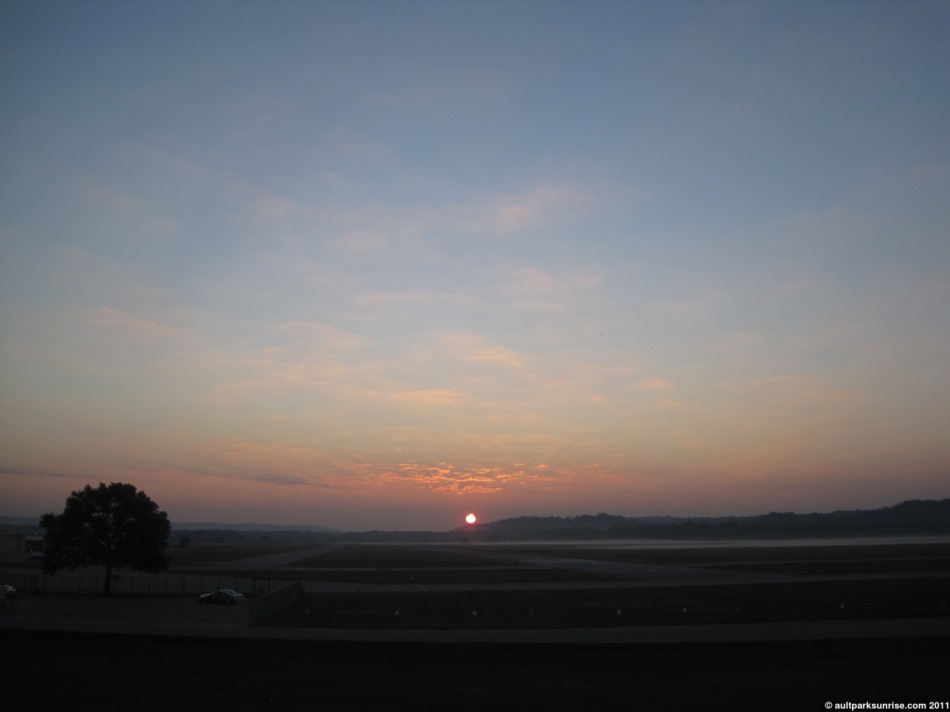 I made it to Lunken Airfield just a few minutes after sunrise. The sun was a deep orange color and the sky was clear of clouds except for a few small whisps just above the horizon. There was a distant layer of light fog in the field just before the base of the levee that runs along the Little Miami River. 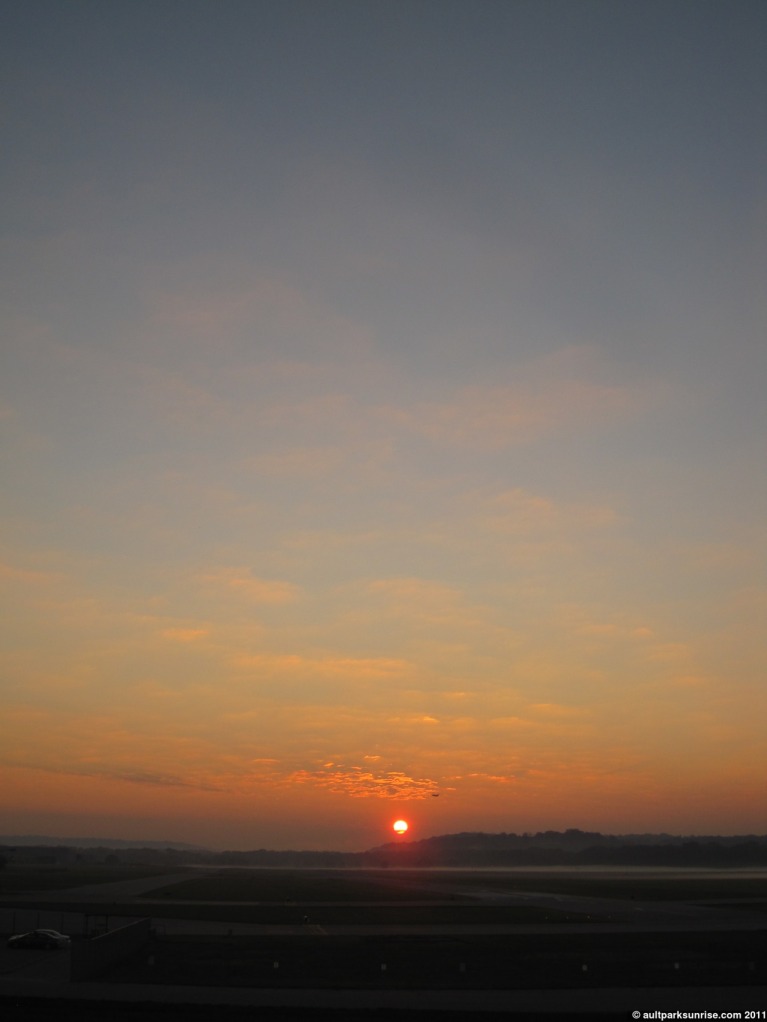 In this vertical shot you can just barely make out a plane taking off into the sunrise. Actually it was a complete coincidence, I didn’t notice the plane until I was just about to snap the picture. 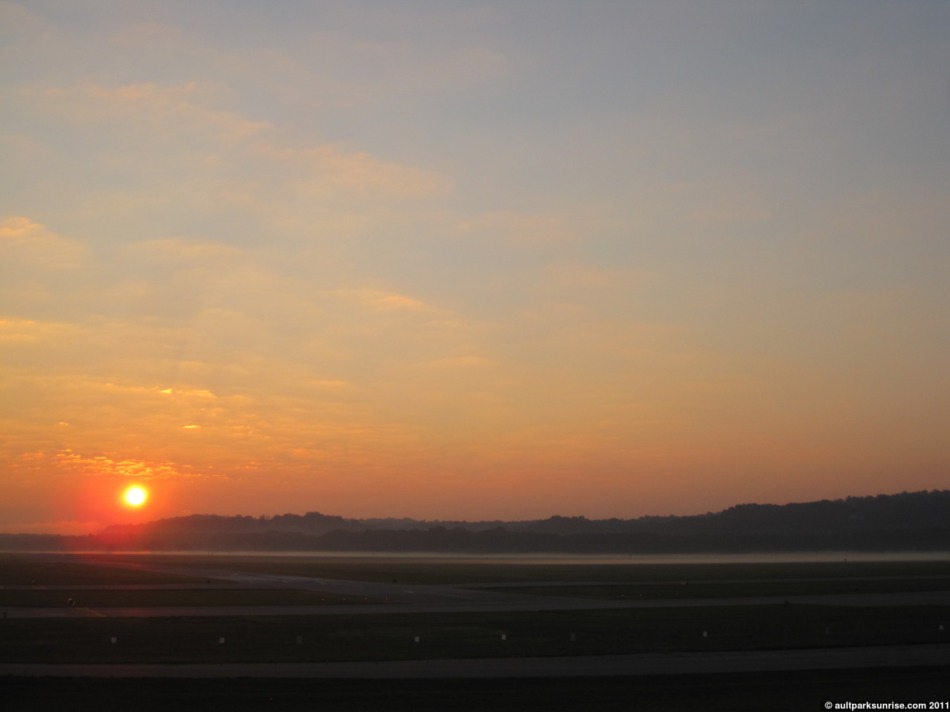 A close up of the foggy layer with the sun rising over Lunken Airfield.

After a few minutes (and a cup of coffee) I hopped on the bike and headed towards the Ohio River. I wanted to get a picture of the downtown skyline as the sun was coming up over the eastern ridge. There are several vantage points along Riverside Road through East End.

If you’re on the front page, please click to continue. Pictures of East End, the downtown skyline, the Ohio River & Marina, and some deer. 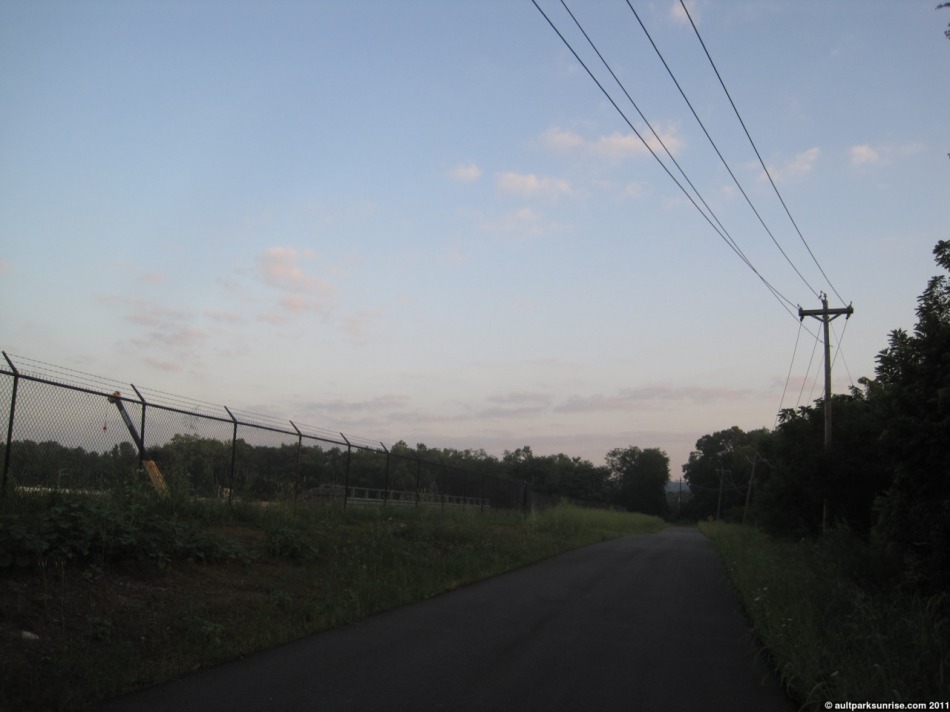 Please excuse the dark exposure. It is hard taking pictures in the shadows of the valley at dawn! This is the wide paved Wilmer / Carrel St. trail, recently finished in Spring 2011. I felt it was important to get this picture online because the path is wide, smooth, and much appreciated. The trail used to be a rail line and it runs by an old late 1700s revolutionary war cemetery. 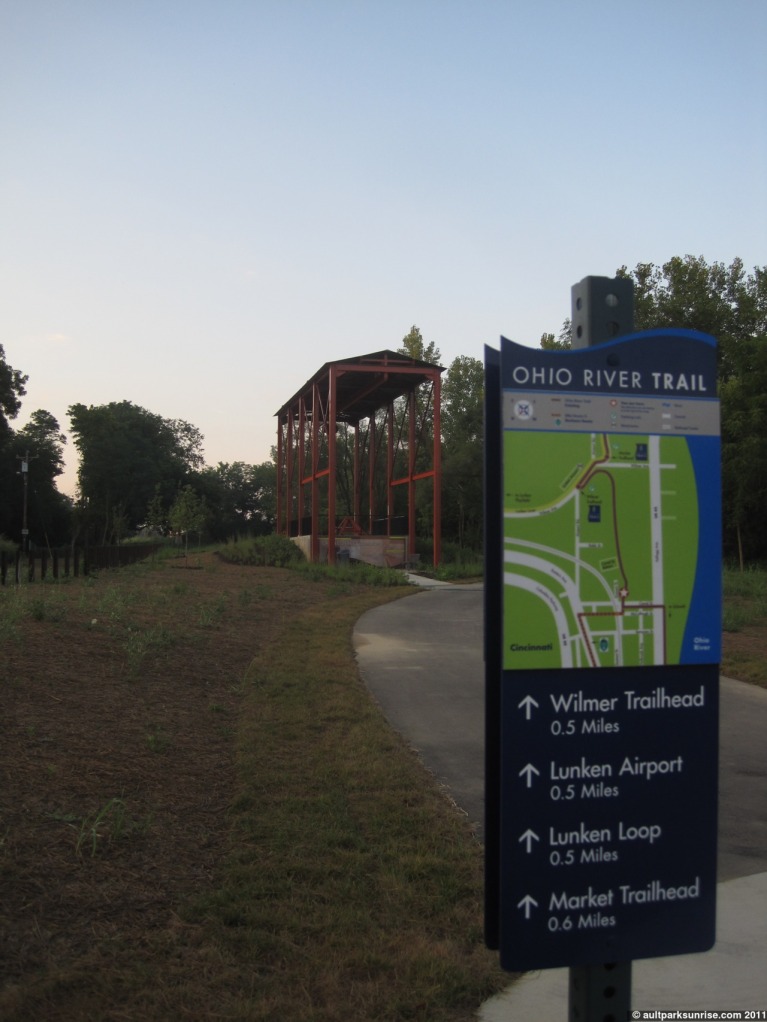 I’ve been so impressed with the recent additions of signage and maps in the area. It’s all part of the Ohio River Trail project. I hope the trails and signs are able to be maintained for years to come. In the distance you can see part of the old rail system (likely some kind of cargo loader related to a defunct business that needed to move stuff between the river and the rail line). The steel structure has been painted red and exists as a historical piece of artwork. 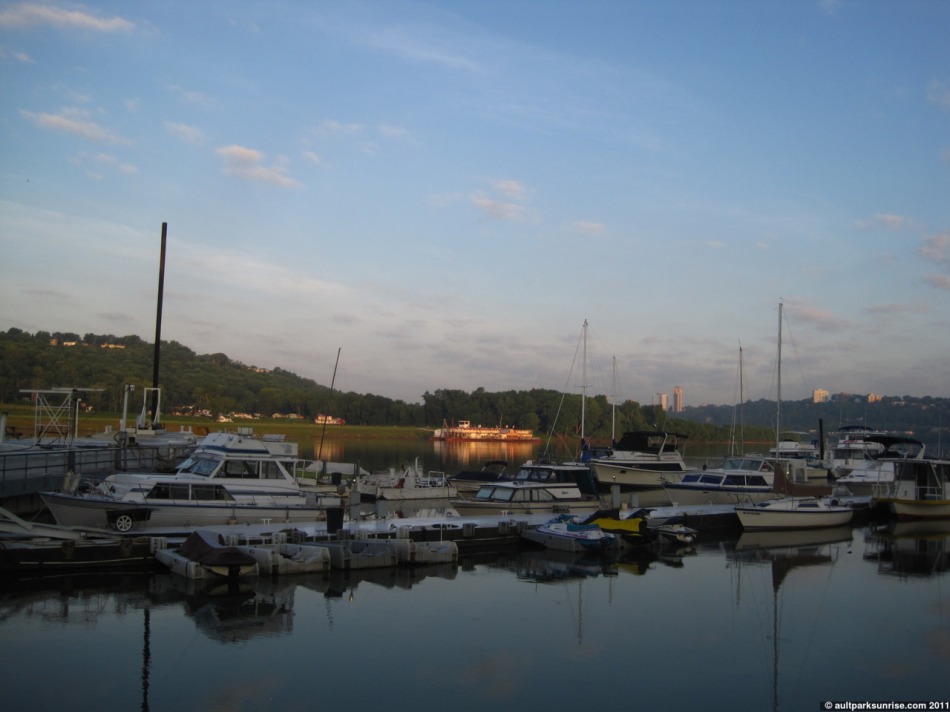 I swing by one of my favorite spots in East End – the Ohio River Launch Club. It is always so peaceful here. Today is no exception, the water is still and reflective. I even saw an individual rower out on the river getting a morning workout in. No barges this morning. In the background you can see an old river boat being lit up by the first light of morning. 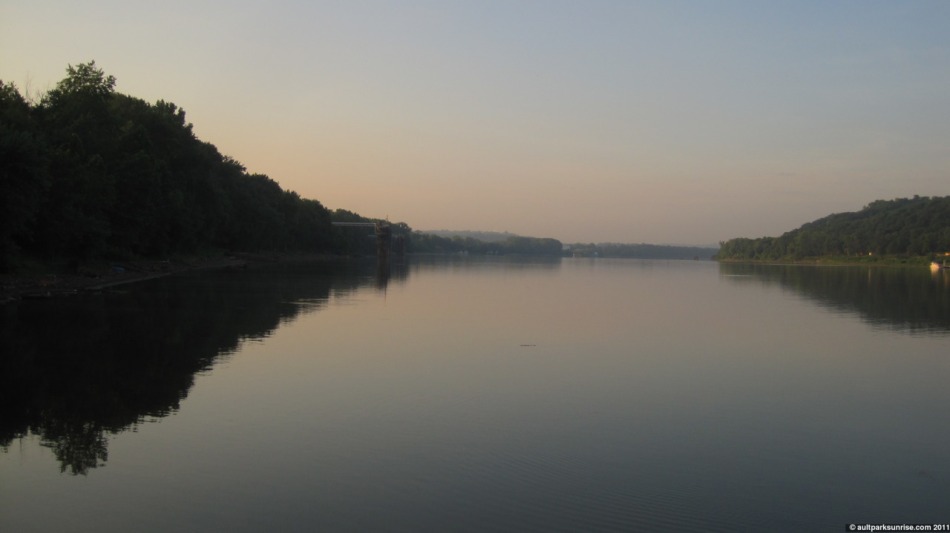 I couldn’t help myself with the symmetry here. I’ve taken several previous pictures in this location. 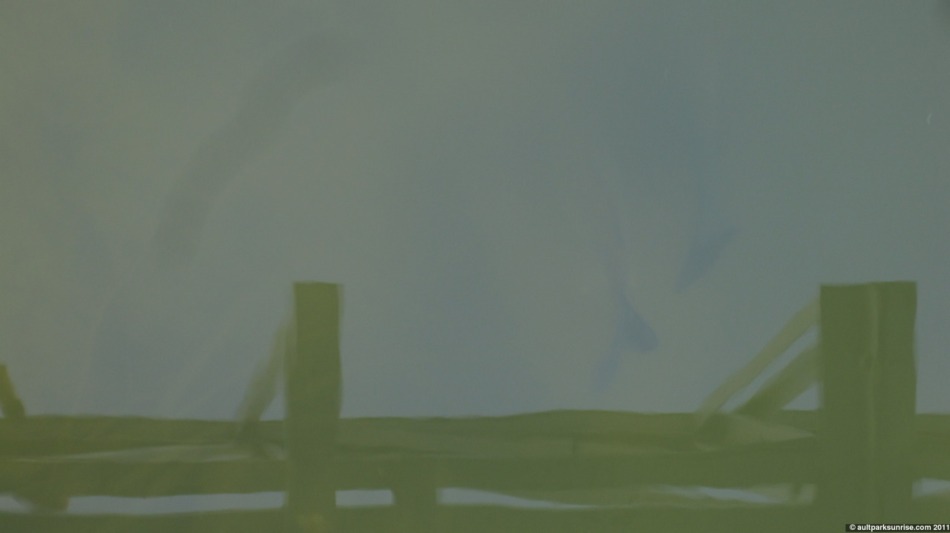 A strange picture, I know. On the right of the picture you can see two fish tails. There was a school of these giant carp (like 2-3ft long) that were hanging out by the banks, rooting through the mud. Lots of fish were jumping, too, making me wish I brought my fly rod.

I continue down riverside road until I get to the bend in the river. There is an open field that I walked across to get a clear shot of the skyline. 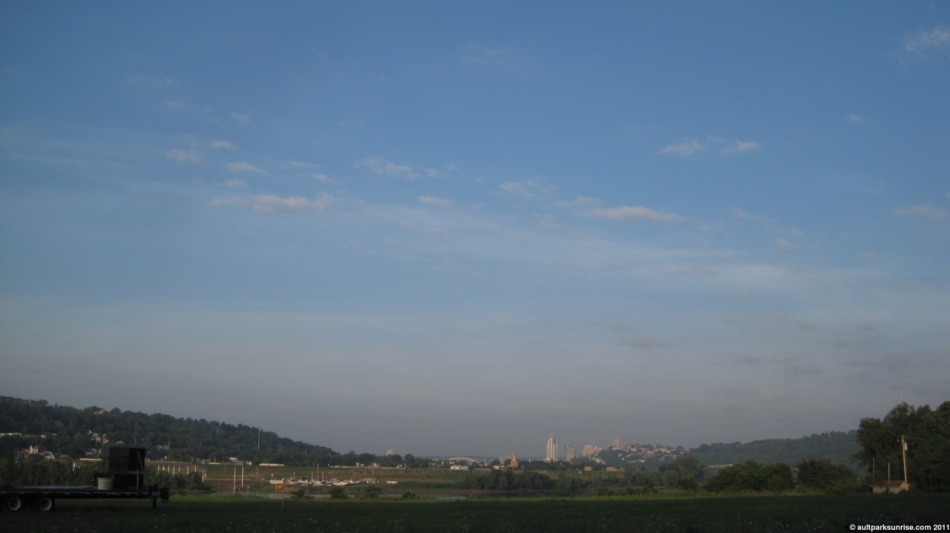 In the distance we can see the Cincinnati skyline. Interestingly enough, the field I walked across was full of fresh green growth and small bushes, but the ground was scattered with old foundation stonework. There are some of the oldest buildings in Cincinnati located in East End, and I always wonder how much has been lost to abandonment over the ages. 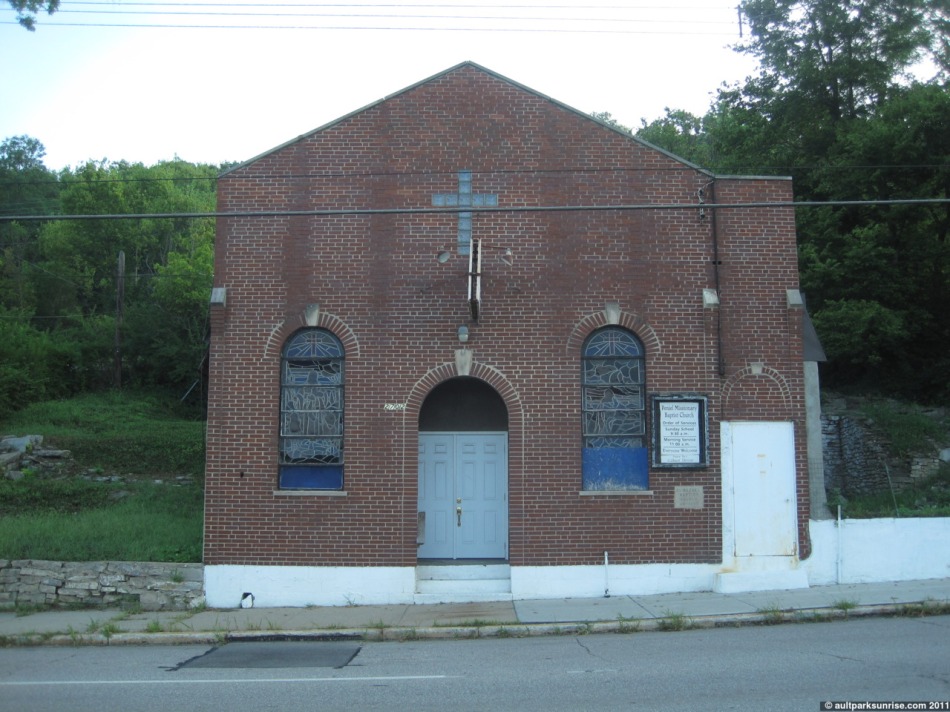 A small church across the street on Riverside Road. Behind the church there are more foundations and support stone walls that creep up along the hill. There is even an old stone staircase that is almost unrecognizable to the left of the church. At one time I’m sure it went up the hill to allow pedestrians access to and from the steep Mt. Tusculum hills. 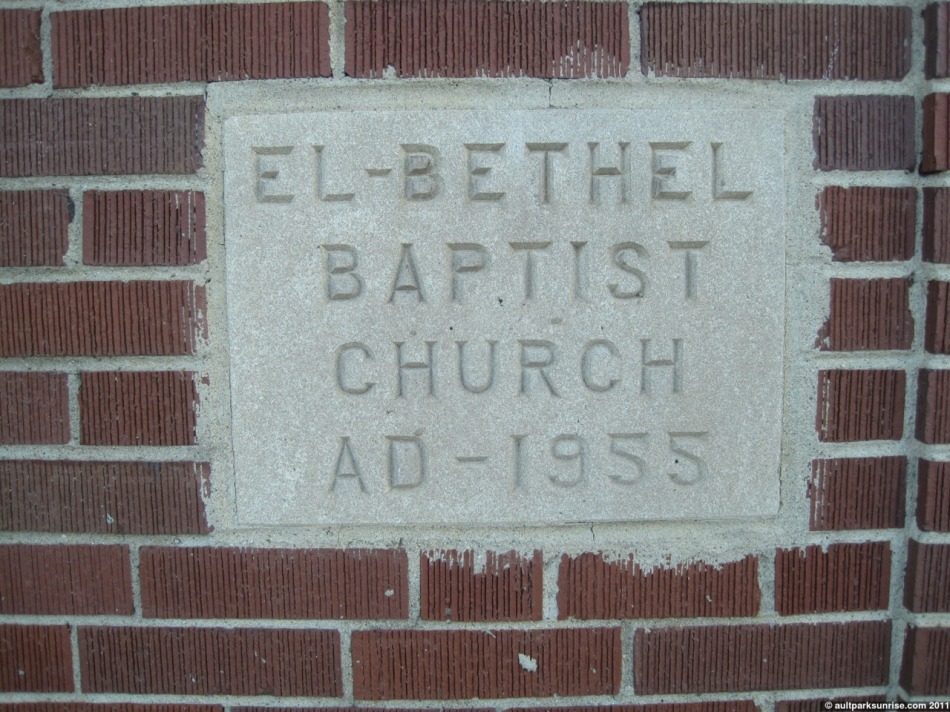 El-Bethel Baptist Church. AD-1955. Honestly I’m surprised, at first I thought it was built in 1855. The el-bethel church is no longer in this building, although I forgot to take a picture of the signage from the existing church. El-Bethel looks like it is still around, but they’ve moved up onto Vine. 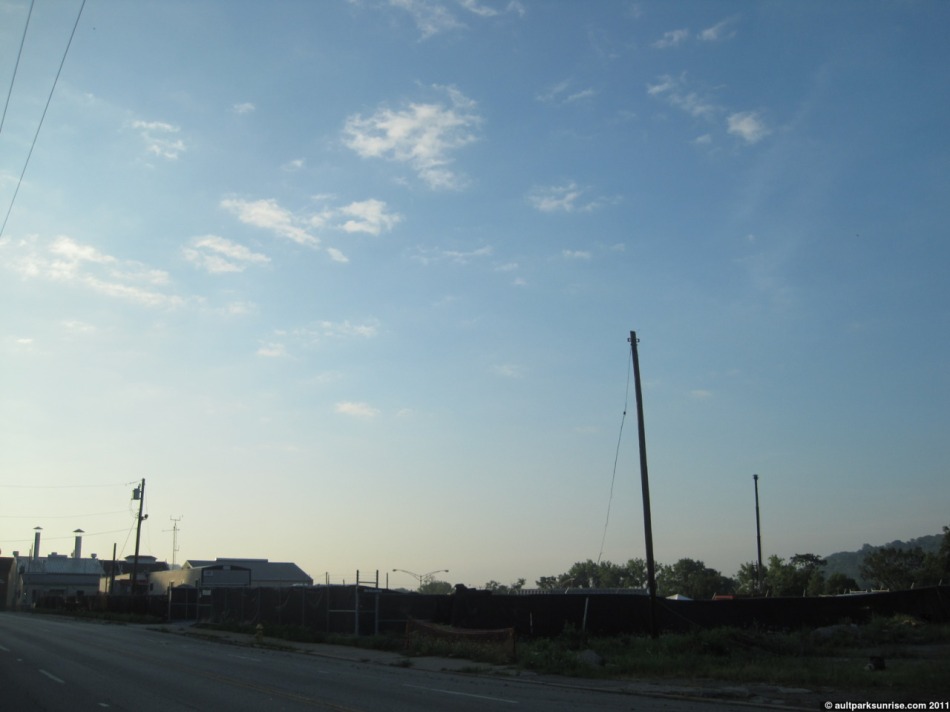 The lighting was strange. The sky was bright but I was still in a shadow cast by the eastern ridge and Mt. Tusculum. The sky was turning into a brilliant blue, though. 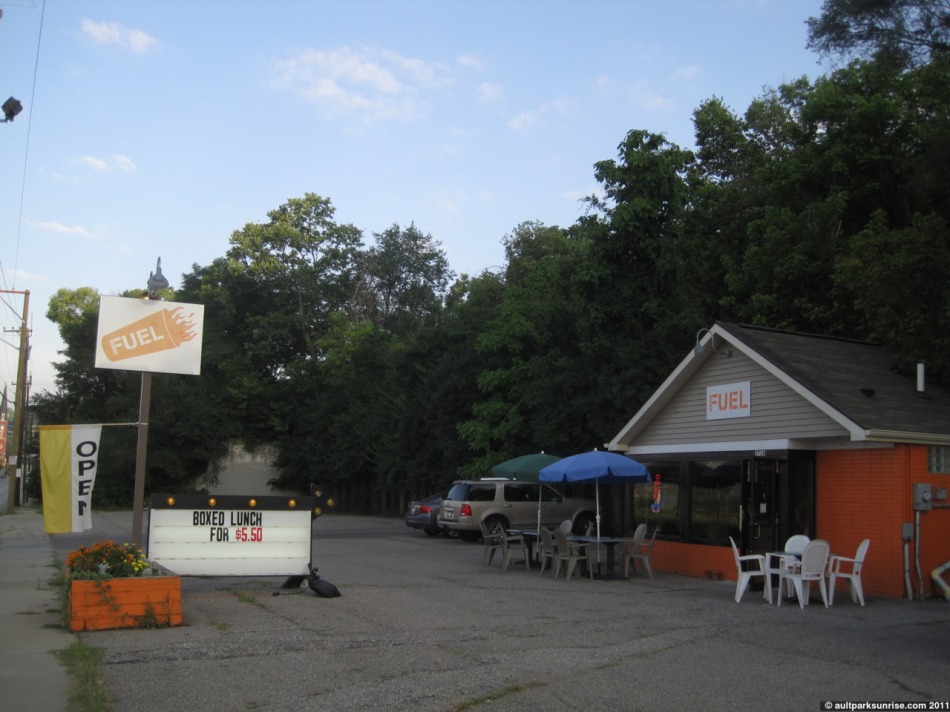 Also in the area was Fuel coffee shop. I’ve always seen it while driving by but I have never stopped in. They had a delicious home made “power bar” that I picked up for breakfast. On the weekend they have a kind of “car show” get-together, and I hear it’s a fun time. Highly recommended! The gentleman behind the bar was friendly and they had lots of stuff to choose from. They definitely cater to the commuter who chooses to take the slow route to work. Riverside is lower volume and a slower speed compared to the high-volume and faster Columbia Parkway that runs parallel. 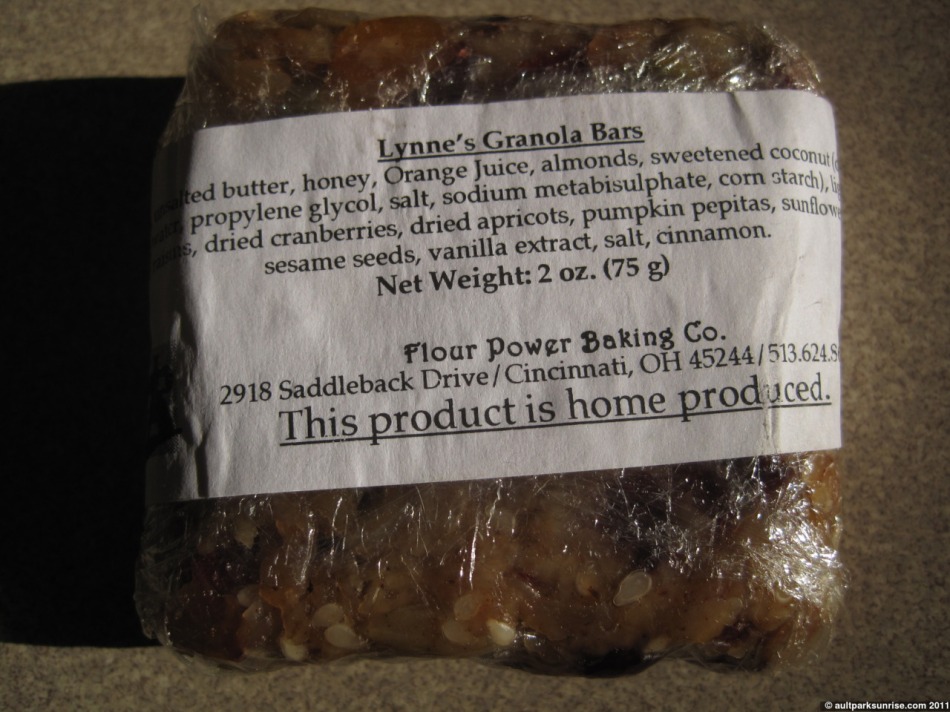 My breakfast! Lynne’s Granola Bar, made by Flour Power Baking Co out of Cincinnati. It was delicious! Definitely a hearty breakfast. 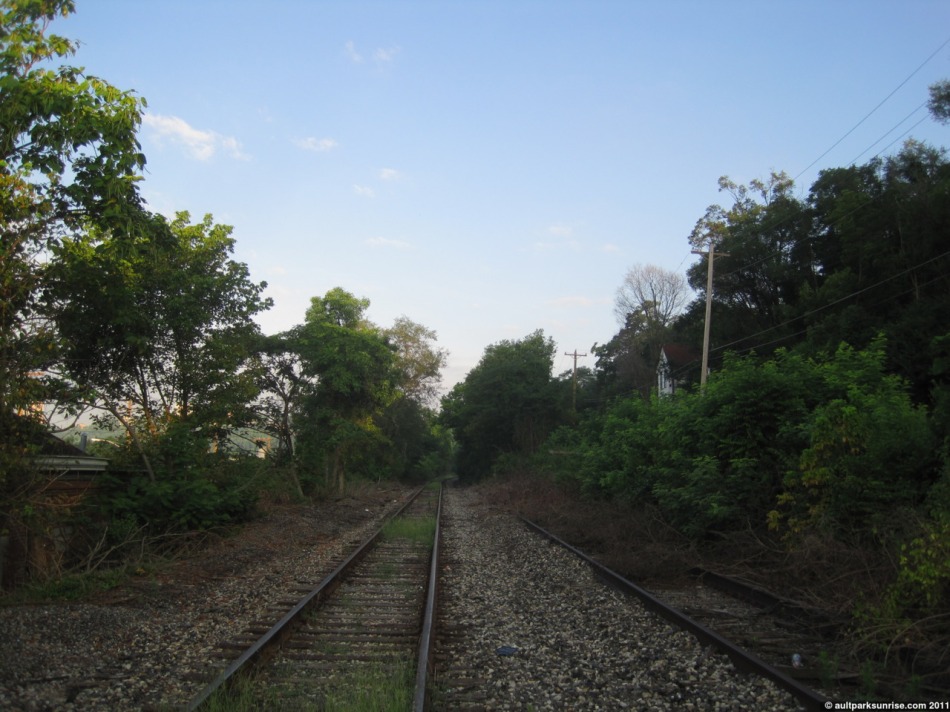 I took a few minutes and hopped up the hill on the road behind Fuel. I crossed the abandoned twin rail line that runs to downtown Cincinnati and out past Lunken Airfield underneath Ault Park. Eventually, with some hope and good vibrations, this will be a paved bike trail that connects the Little Miami Bike Trail to Downtown Cincinnati through the Ohio River Trail System. 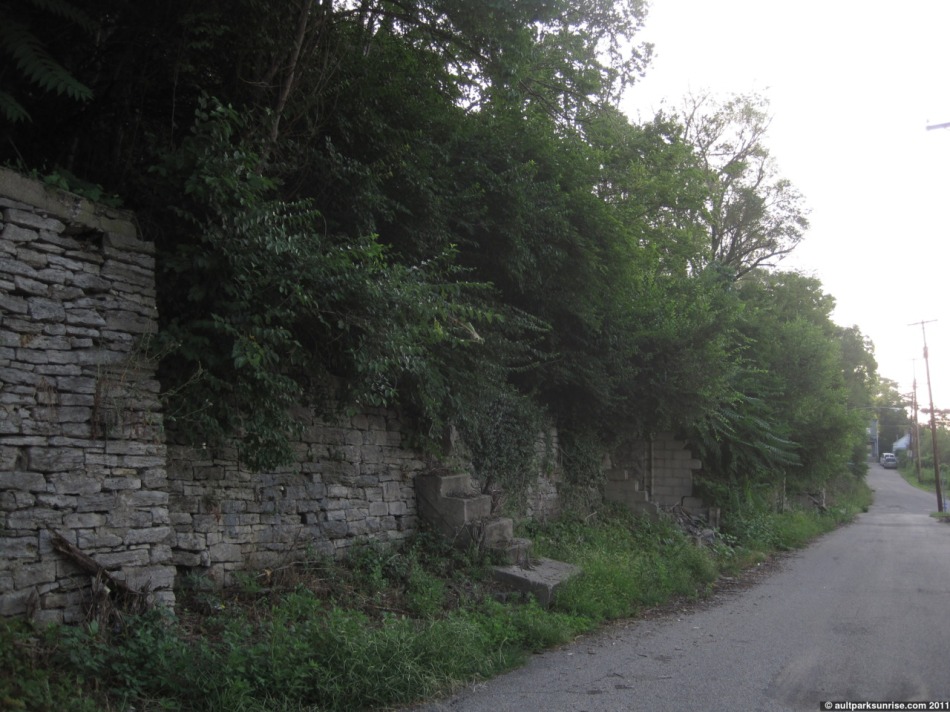 One of the strange and fascinating things about this part of East End is how many old foundations there are nestled into the hill side that have since been taken over by the forest. Lots of stair cases that go into the forest and disappear into a mix of heavy foliage and cement piles.

I ended up talking with a couple who were sitting on their porch enjoying a morning coffee. I couldn’t believe my eyes when I turned around and saw their view. They basically had a perfect view downriver of Downtown Cincinnati from their porch. They told me that there used to be a full blown neighborhood on this road, but now only about 10 homes remain in the area. They only moved in last year so they didn’t know why the homes were torn down, but there was a gentleman who still lives across the street from them who has pictures from the early 1950s of the street when it was full of homes. What happened here?

From here I packed it all up and booked it straight into work. On the way I saw several deer. One of them, on Delta Ave, was being chased out of a garden by the home owner. The other three I saw as I was coming up Stewart Ave. There is a decently sized patch of forest here but up on the hill is I-71. It’s amazing we don’t see more deer on the side of the road around here. They were curious about why I stopped to take a picture, but soon went on their way. 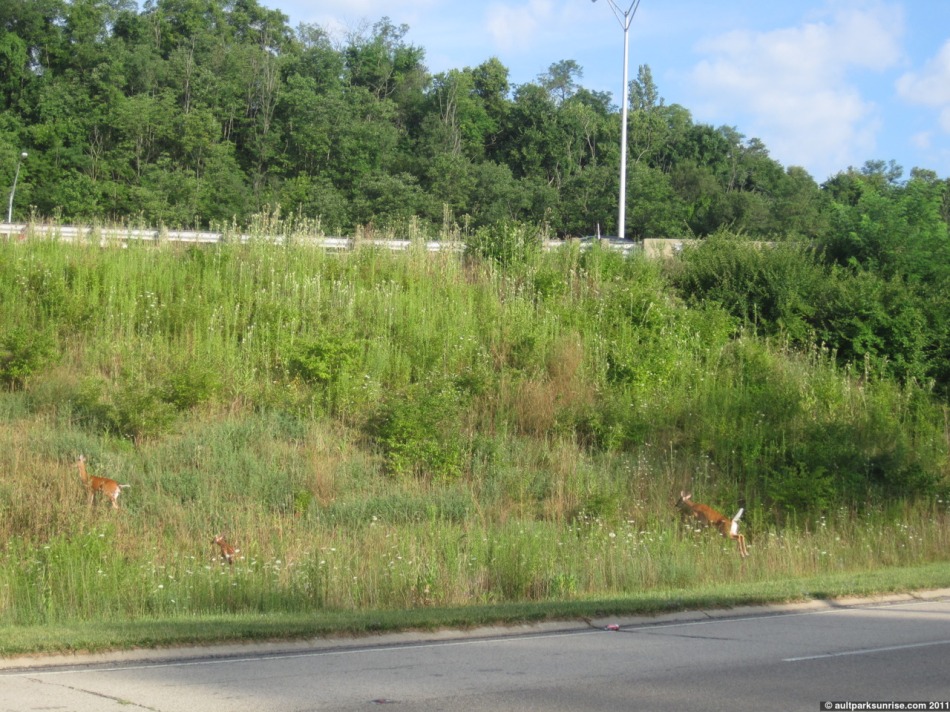 A young doe and her two fawns.

This entry was posted on August 4, 2011 by Ault Park Sunrise. It was filed under clear skies, lunken, sunrise and was tagged with cincinnati, deer, east end, lunken airfield, marina, ohio river.