Looking out towards Lunken Airfield to the west. The forest is dark and misty.

Looking at Downtown from Bellevue Hill Park in Clifton

This morning’s update is a bit of a strange one. My week has been in limbo because my car is in the shop getting checked out. The nice side effect of this transportation issue is that I’ve been forced to rely on my bike a lot more than I normally am used to. I’ve commuted to work twice (never done that before) and realized that the 6.5mi commute is seriously not bad. I can do it in 25 minutes which is comparable to the 15 minutes it takes by car. The route is mostly residential and feels safe. I also commuted to the University of Cincinnati campus yesterday, a bit longer of a stretch. The heat was intense (around 90F) and I think my body wanted the extra sleep this morning to make up for the extra physical activity. Long story short, yesterday I wasn’t able to get near my laptop (I keep it at work) so sunrise 68 is coming at you a day late. That’s OK though because I was able to scope out Bellevue Park, one of my favorites in Clifton that I don’t get to visit nearly enough, and realized some historically significant facts about it. Notch one more up for my respect to the Cincinnati Parks program.

If you’re on the front page you might as well click on now, there are some great pictures (and old high-def historical prints compliments of shorpy.com)

The sun just able to poke through the foggy haze.

Close to 8am, where have the early sunrises gone?! The time is just flying by. A bit of orange as the sun penetrates through the humid morning.

As the sun warmed up the valley, the fog was pushed back into the park. 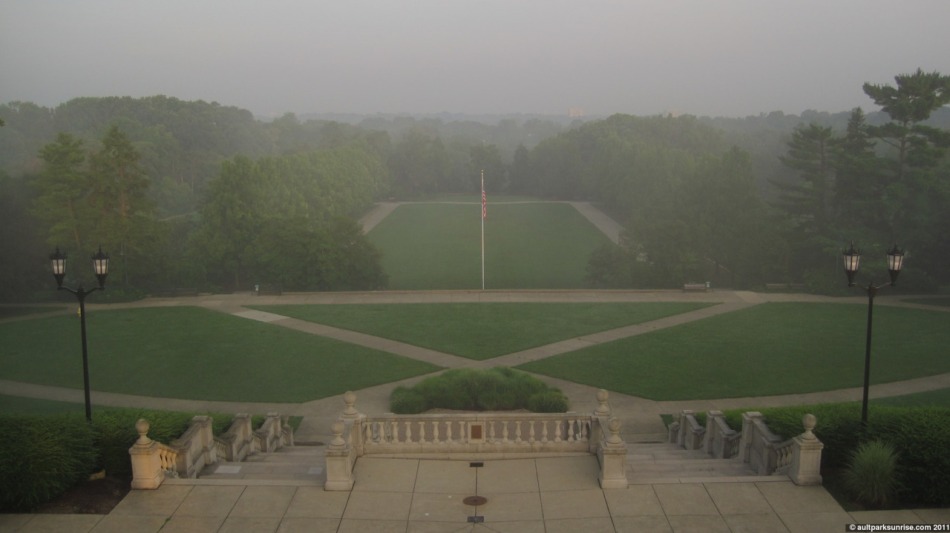 Looking out at the Ault Park Lawn in the dense fog.

Playing with patterns. This is a picture of the sky, turned sideways. Mostly taken for future reference in case I ever want to paint a gradient sky scape.

Final shot of the morning sunrise, through the trees from the overlook

So I had a morning appointment on campus this morning and decided to commute by bike. It was hot and made for a great workout. When I got out of my appointment I decided to check out Bellevue Hill Park – a park that I love dearly for the view, but I hardly get around to visiting. The hills in Clifton are as bad, if not worse, than the hills in Eastern Cincinnati. Bellevue Hill Park sits part-way down the cliff side facing South towards downtown.

As it turns out I may have been subconsciously drawn to this park. I’ve been looking up information on the Cincinnati Inclines over the past week. I knew there was one in Clifton but really haven’t sat down and figured out where it was. As it turns out Bellevue Hill Park actually *is* the old incline station. That kind of blew me out of the water. Once again Cincinnati Parks reminds me of how awesome they are as an organization. Historical transportation system being torn up? Well that sucks, but at least we can make it a park!

There are some *beautiful* old high-res pictures of the old incline stations in Mt. Adams, Bellevue Hill, and Price Hill. I’m including them here but please know that they all come from shorpy.com where you can purchase them in print.

I’m not exactly sure where the incline came up on the hill, but there is definitely more room for exploring. I’m sure I can kick up some old ruins down on W. Clifton or at the base of the hill.

This is what the old Bellevue Incline Station used to look like coming up the hill (click the links in the caption for purchasing information from shorpy): 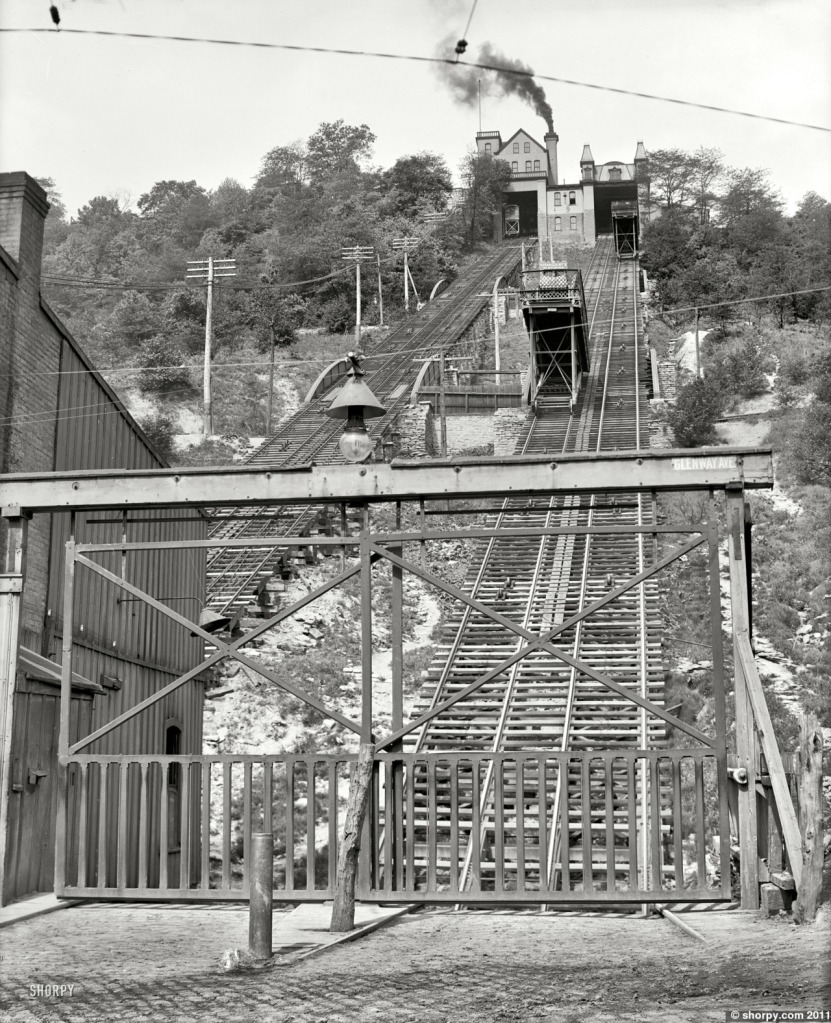 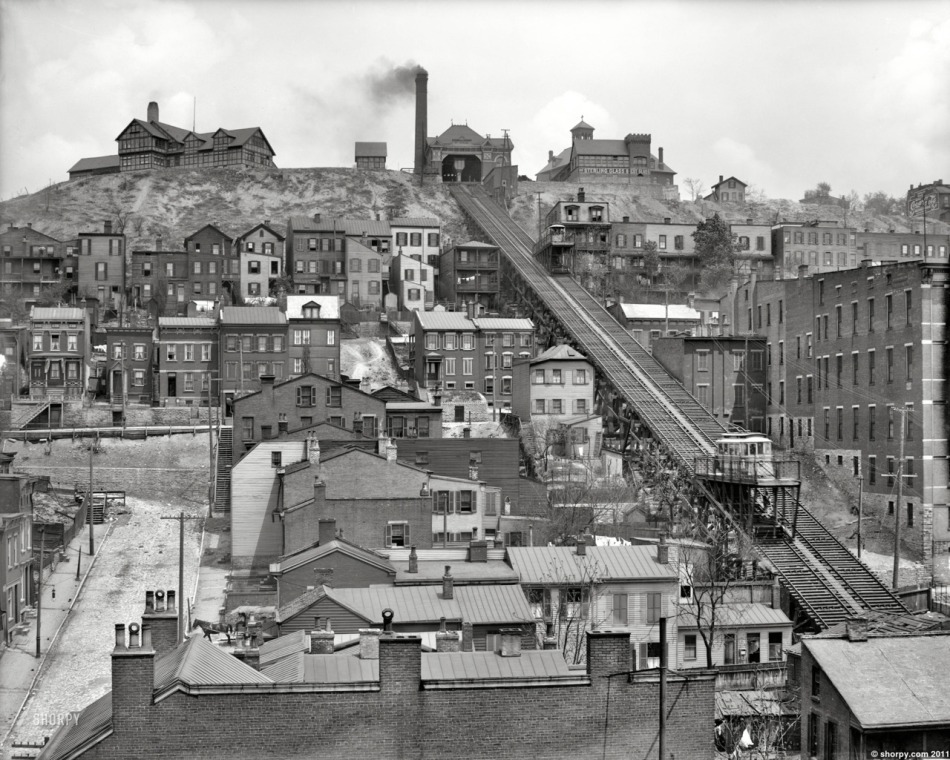 And finally, one of my favorites that I found showcasing Mt. Adams and the street car system, from 1906:

Now-a-days the Bellevue Incline Station at the top of the cliff has been turned into a park. The view from Belleview Hill Park is breathtaking. The entire panorama of downtown is something I could stare at all afternoon. You can see Over-The-Rhine in the foreground with its collection of 1800s Italianate architecture (arguably one of the largest of such collection in the world), Union Terminal (not pictured-  to the right), Mt. Adams and the bridges over the river (not pictured – to the left), and the entirety of the set of sky scrapers downtown. I imagine this view was as impressive in 1915 when the incline systems were in full swing.

Now that the sunrise is coming up later each morning, I plan on making it here sometime in the near future for a sunrise. It won’t be a direct view of the sunrise but I bet the downtown skyline, combined with a bit of fog and orange atmosphere, will be beautiful. That’s the one thing I’ve realized about the late sunrises that I’m coming to appreciate – I can get up at the same time and bike further before the sun comes up.

Bellevue Park’s Stone Building. It is inspired by Frank Lloyd Wright’s designs. I have no idea if the original Bellevue House was located on this site or around the corner somewhere. I can’t trace down any history on what actually happened to the house, or why it was torn down.

Interestingly enough, this park (and the view) is featured heavily in 3-doors down’s “Not My Time” video. In the video, they’re playing up on top of the cement pavilion structure. What do you call it? A flat mushroom? heh.

“An inclined plane once connected this overlook with Elm Street below. Built in 1876 and powered by steam, it was one of several that carried residents from the polluted basin up hill-sides for fresh air. It reduced the trip up the hillside from 45 minutes to one and a half minutes.” 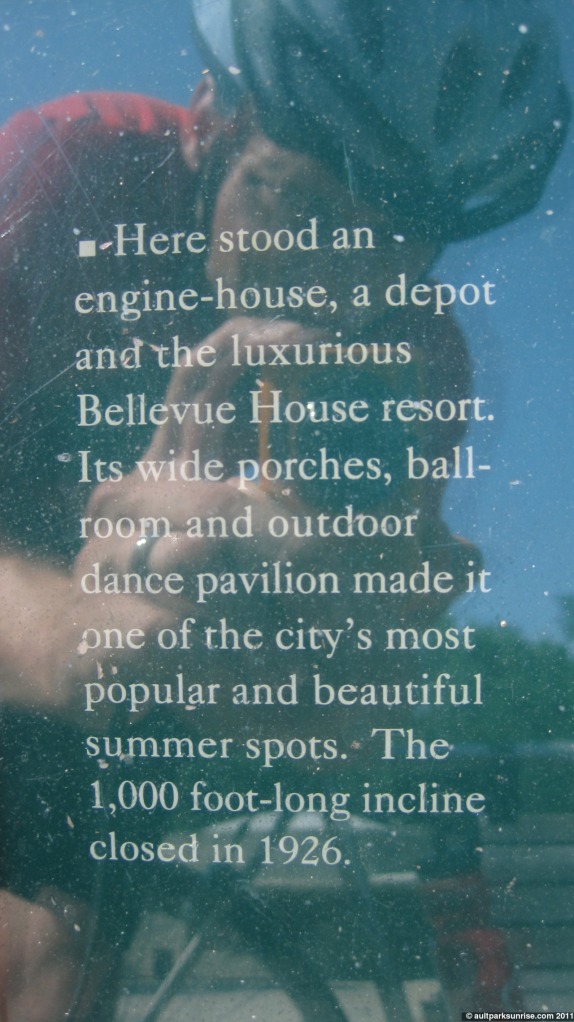 “Here stood an engine-house, a depot and the luxurious Bellevue House resort. Its wide porches, ball-room and outdoor dance pavilion made it one of the city’s most popular and beautiful summer spots. The 1,000 foot-long incline closed in 1926.”

“Bellevue Hill became a park in 1949. Its pavilion, built in 1952, was influenced by the work of Frank Lloyd Wright. The pavilion was designed by Carl Fruend, the architect of many park buildings, and is unique in the city’s park system.”

The underside of the pavilion, showing off the column and mushroom-like structures. To me this just screams 1950s modernism! See the dark corner on the left side of the stone wall? That’s where the graffiti face is painted (see below). 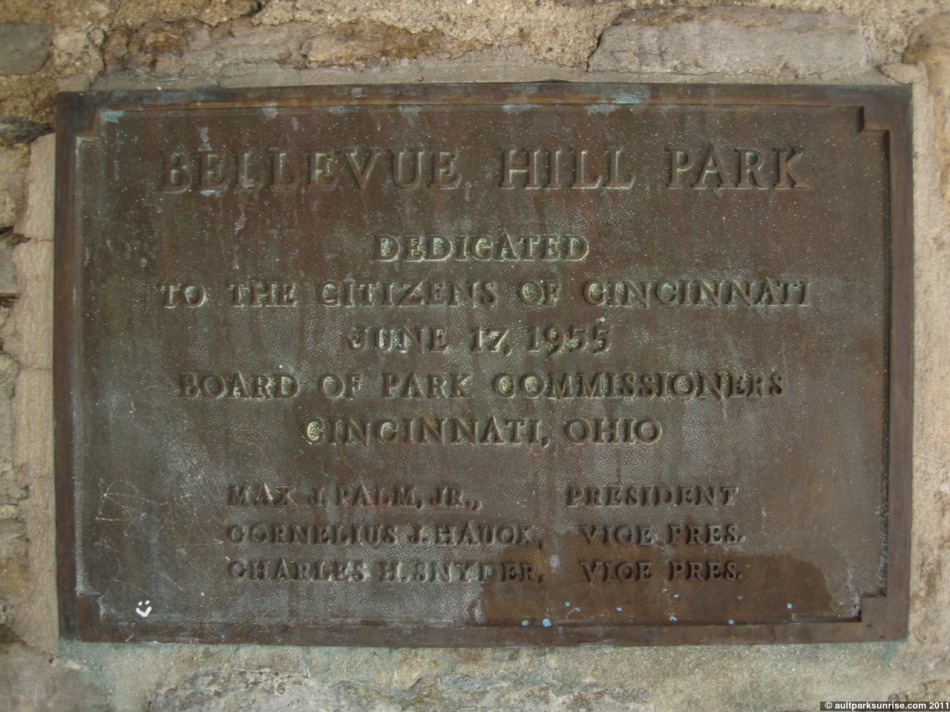 Looking towards downtown we can see Elm Street straight ahead. The bottom half of the incline station was at the head of Elm Street (directly at the bottom of the hill). The park top aligns directly with Elm Street.

“1 ear to hear your fear”. Some interesting graffiti in the park. I have mixed feelings about this kind of thing. I’m going to have to go with thumbs down. If it looked like the person spent more than 5 minutes on it, maybe I’d change my mind, but for now it stands out simply as vandalism on the stone building in the park. I will, however, give some style points because this is actually in a very dark corner of the building. It is hardly noticeable unless you’re staring right at it.