This morning’s sunrise was almost identical to yesterday’s sunrise. There was a low atmospheric layer of foggy stratus haze that obscured most of the light. For the few minutes before sunrise you could see these bursting rays of light arcing up through the upper atmosphere, but they disappeared before I could get a decent picture of them. The sky was blue up above me and the moon clearly visible.

This week’s weather is calling for mostly hot and humid days with scattered thunder storms. I’ve been really interested lately in watching how the morning sunrise weather changes with the air pressure. Early last week the mornings were gray with fog sitting down in the lower valley basin. As the thunder storms built up in the tri-state, and finally broke with intense action, the fog disappeared (or, probably more accurately, moved higher into the atmosphere). As a side effect, the day following the major storms was perfectly clear with no clouds in the sky. The next day had slight whisps of clouds, and the following day had a beautifully mixed set of 40% cloud cover with all kinds of formations. It was on that day that I got some of the best sunrise pictures of the month.

The point of all of this is the following. Yesterday and today were gray and boring. But today it looks like we’re in line for some heavy thunderstorms that may stick around for a few days. I can’t wait for the first sunrise after the heavy summer storms. The post-storm sunrises never disappoint and are always unique and colorful. You can’t have the best ones without first having a streak of boring ones 🙂

Down below to the left we see Armleder Park (For some great pictures of the park, check out last Friday’s post). To the right we see Lunken Airfield (pictures from last week). See that patch of forest in the middle? That’s where the 4-lane Beechmont Avenue runs out to Mt. Washington and Anderson. The gate that I highlighted yesterday, located on the back side of Lunken Airport’s 5-mile bike trail, will open up to a connector trail that will go under Beechmont Avenue and over to Armleder Park. This will give cyclists, runners, roller bladers, and dog walkers access Armleder Park from Lunken Airfield.

This is a picture of the gate that I took yesterday. You can see on the left side, beyond the gate, there are markers that show that the construction crew is working diligently on the path. Due to all the flooding that occurred during the spring, I’m wondering if they’ll have a hard time meeting their Fall 2011 deadline.

So the interesting thing about this new trail is that they are building it on top of an existing lane. There used to be a small gravel access road that ran along the levee. I always wondered what the heck that road used to be. It was, at one time, important enough to be paved and have a gate protecting access to it. The gate is old and almost overrun with vegetation now. I had a few theories:

Well, that’s about it as far as my ill-informed theories go. Check out the Google Map and see for yourself. The “new trail” is the blue line and you can see how it continues over into the forest on the other side of Beechmont Ave.

Yesterday I was poking around the Cincinnati subreddit and got into a discussion about this Armleder / Lunken Connector. I asked if anyone knew what used to be back along this trail. I honestly didn’t expect to find anything out, but the user jOhn33y informed me that there used to be an old drag strip back in the forest that operated from the late 1950s to the mid 1960s before being shut down due to noise ordinance violations. Interestingly enough, one YouTube commenter says that as a boy he remembers asking his mom why they shut down the race track, and she replied “the rich people on the hill didn’t like the noise so they shut it down”. Also reminds me of the stories I hear about the old Grandin Ave Viaduct over Delta Ave, but that’s a story for another day.

Now that I look at the satellite map, it makes perfect sense. The actual drag strip was on the other side of Beechmont Ave so I can’t say for sure whether this trail was simply alternate access to the strip, part of the racing strip in general, or something else entirely. Either way this opens up a new piece of Eastern Cincinnati history that I was completely unaware of. Once these storms die down I plan on exploring the old Drag Strip to see what still remains. There is some footage on YouTube of someone else’s exploration, as well as an old silent film (with audio commentary removed due to copyright violations… grrr). Here’s some awesome old footage of the 1960s drag strip:

Sometime after these thunder storms die down I’ll go exploring back there to see what still remains of the old drag strip. There’s some footage on YouTube but there looks to be much more to the site than just the small area where the video is taken. The original source for all of this information is from this Queen City Motorsports page. 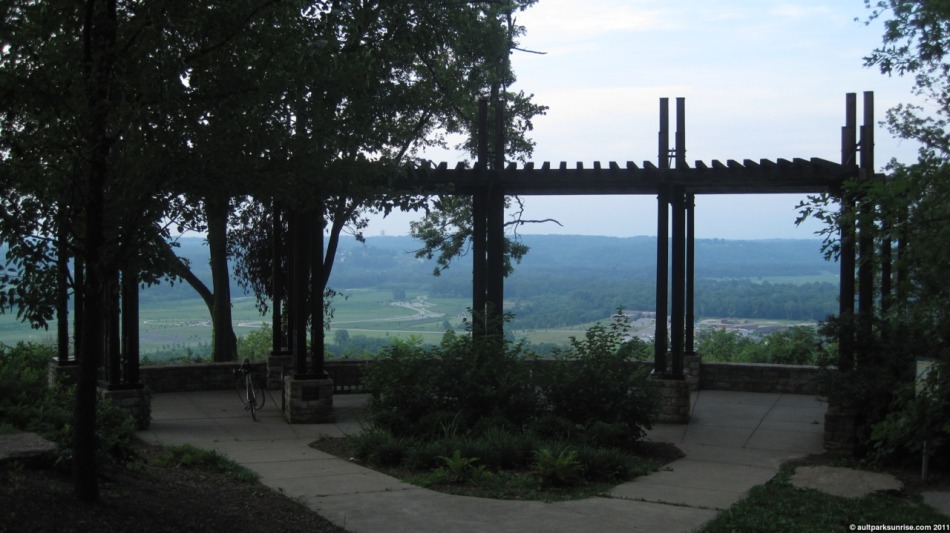 This entry was posted on July 19, 2011 by Ault Park Sunrise. It was filed under ault park, overcast, sunrise and was tagged with armleder park, ault park, beechmont dragway, cincinnati, history.