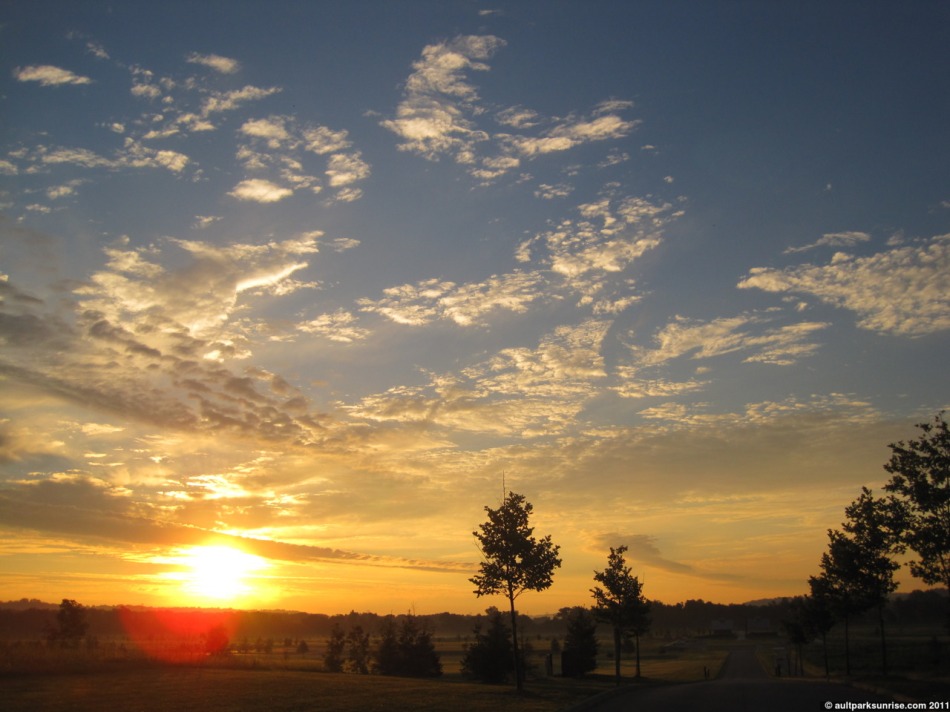 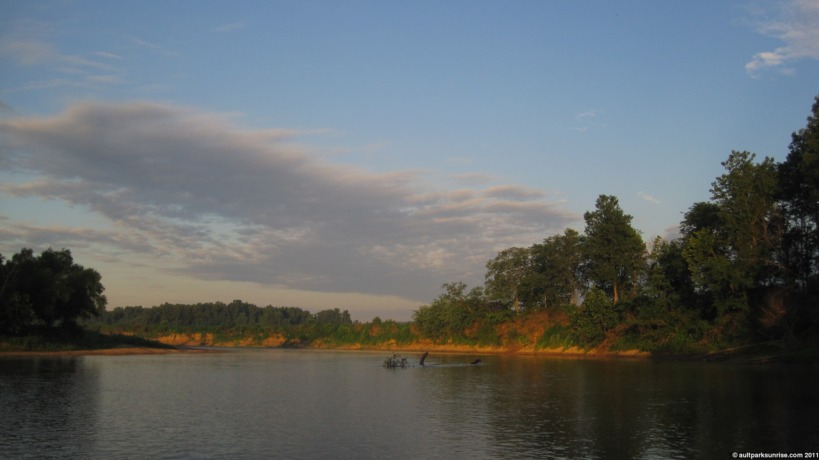 Looking away from the sunrise at the Little Miami River.

Oh man. The past few days have seen a slight increase in cloud cover as the week has rolled by. First the storms went through. Then the skies were clear. Then there was a bit of light whipsy cloud action. Finally, this morning hit critical cloud cover and the skies were ablaze with all kinds of cloud formations. It was seriously breathtaking!

I held good on the promise I made myself yesterday (more like challenge) to see today’s sunrise in Armleder Park. This week was unique in that I hit all of the major spots: Alms Park (twice), Ault Park, Lunken Airfield, and finally Armleder Park. I haven’t been back to Armleder Park since just after the major floods receded. Has it really been 36 sunrises ago? How the time flies. Summer has settled in comfortably since my last visit to the park. I ended up checking out the Little Miami River as well. Lots of animal tracks, including a giant snake track, coyotes, raccoons, and deer. This is a bigger set, around 30 pictures in all. 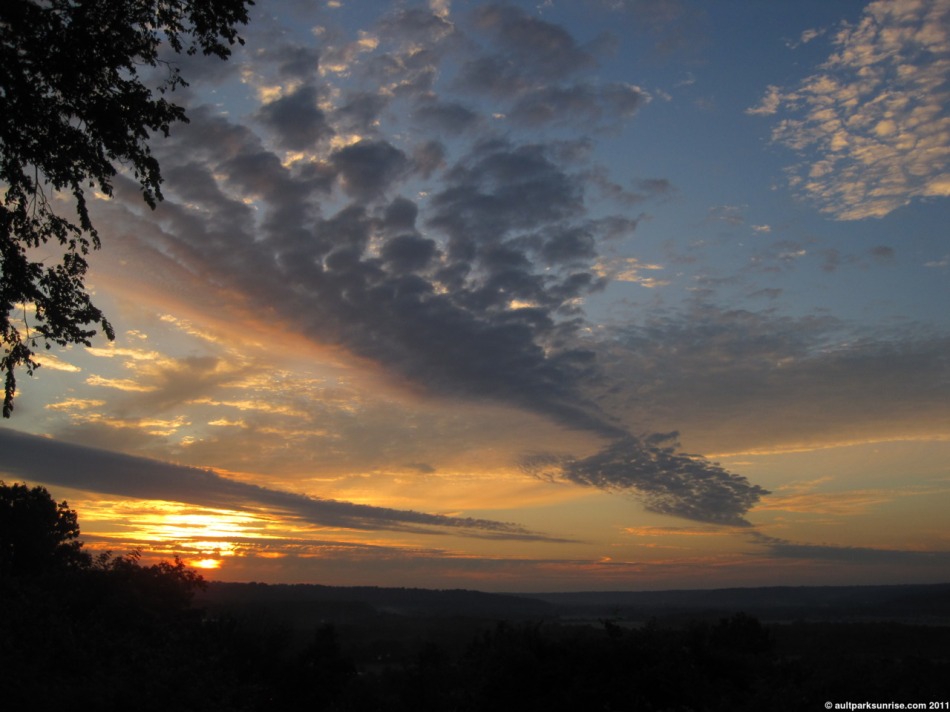 The sunrise was a unique one for sure.

A close-up over the valley

Lots of different patterns going on in the sky.

If you’d like to see the rest of the post, including giant snake paths and coyote tracks (25 more coming right up) and you’re on the front page, click to continue –> 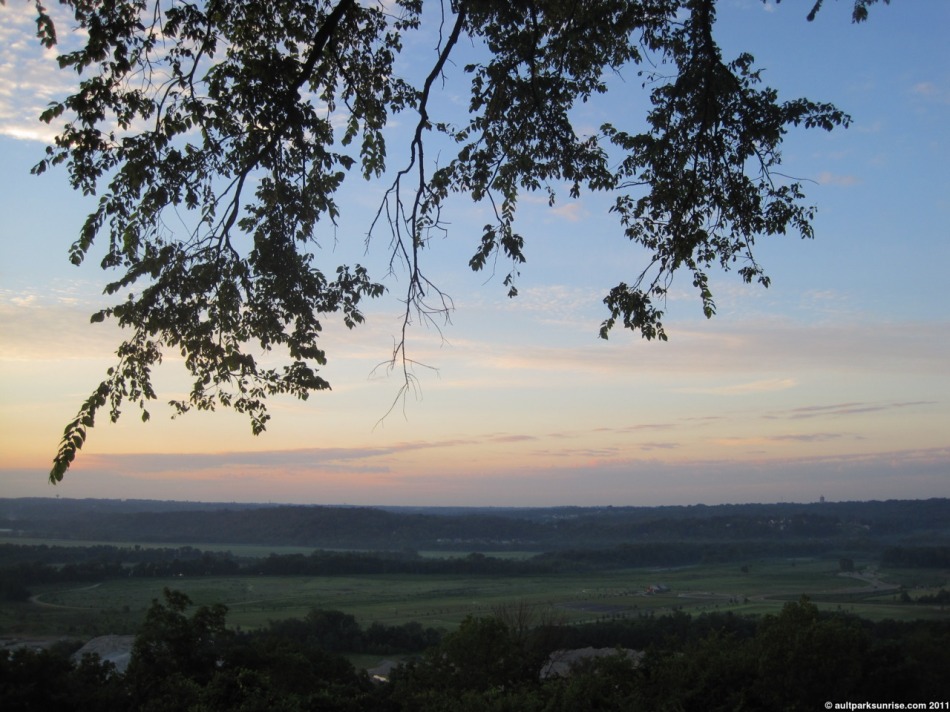 Looking down into Armleder Park. The rest of this photo set takes place down there.

Ooooh man. The sunrise as I approached Armleder Park was intense! I think the high humidity of the river basin exemplified the orange colors. By far my favorite picture of the day.

When you get into Armleder Park, there is a path that heads off of the main loop towards the river. This is my favorite part of the park because it dead ends inside the forest at a bike rack and a set of benches. If you recall from the previous exploration, the last time I was here (close to two months ago) there were no plants on either side of the path, due to the excessive flooding, and there were hardly any leaves on the trees. I commented that I couldn’t wait for the plants to bounce back to fill the prairie with mid-summer insects and birds. I wasn’t disappointed!

Just earlier this week, I saw this white flower up in Alms Park. These wild flowers are now flourishing down in the prairie along with the purple wild flower I’ve seen so much of lately.

At the end of the path. Now that the leaves are in, it is quiet and lush back here. The mosquitoes really weren’t bad, I was expecting much worse.

I was about to head back home when I realized that the river was down to a much more reasonable level. This is the Little Miami River. It is a *classic* example of a beautiful Ohio river system. The flat terrain of the region (except for the quick transition from upper state farmland to Ohio River basin) provides quiet streams with sandy and rocky beaches that are great for fishing.

I followed the short deer path down to the river. I believe after coming down to the beach for the first time in several months I realized that the path that dead ends in the forest was built by a very smart park designer. He knew that this beach was a great spot to fish and explore. Of all the places to run the bike path, he chose to drop it off here. Well done, sir.

The river is wide and quiet but moving at a decent pace. Something I found interesting about the shore of the Little Miami River was just how much sand there was. Typically in late summer the shore is made up entirely of sand islands of river stones. Perfect for skipping. The enormous amount of rain that we got, combined with the flooding up through the park, has led to a huge build up of silt and sand on the shores of the river. I imagine it will all eventually end up flowing down river.

Here we have, I believe, raccoon (left), coyote (center), deer (right)! What a perfect set up.

“Oh”, I think to myself, “what a curious formation in the sand. What could cause such a strange motion, almost like a broom sweeping across the sand?” I actually still don’t know, but the hilarious part about this picture is the other track to the left that I willfully neglected to categorize.  That is, until about 2 minutes later.

So at this point I’m walking along the beach, admiring the huge deposits of sand. And then I come across this. OOOOhhh! That would be a giant snake track. A snake that is fat, like a fire hose. I then look around me and realize that these tracks are *everywhere*. And they’re fresh. And there are bushes all around me that they’re probably hiding in. But I bury that potential fear and move on.

Oh, wonderful. A coyote track as big as I’ve seen them. About as big as my fist. Also fresh. At this point I’m considering just how tough I am and begin to slowly, respectfully (!), carefully head back up the bank to the bike path. This clip from family guy was running through my head. 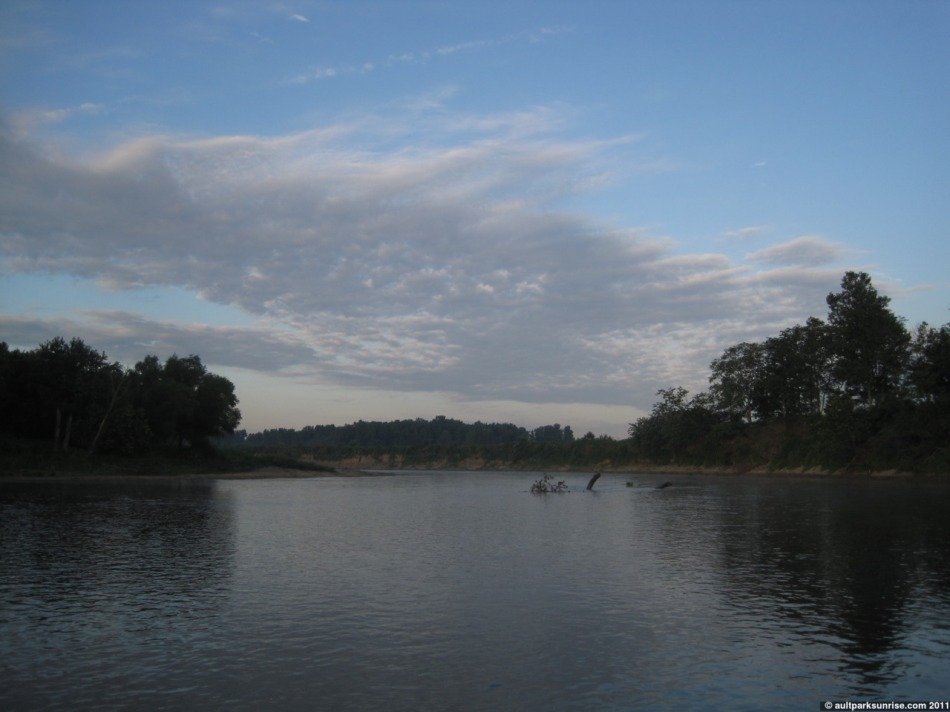 In the distance you can see the high ledge of the bank.

Final shot of the river. 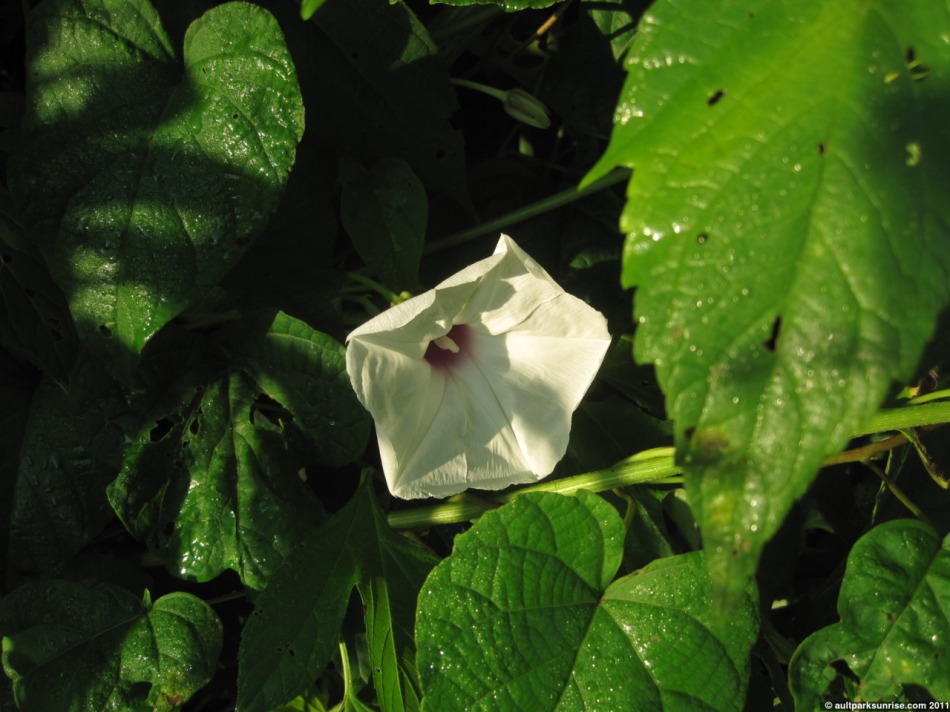 Another shot of that white flower growing through the tall prairie hedges.

Armleder Park is a great open area. The prairie is seriously healthy. I saw swarms of red winged black birds, once endangered, larger than any I’ve ever seen up close. One swam I scared up while riding by had to have had 35+ birds. Their orange/red patches streaked together in the orange light. I also saw yellow finches, blue finches, sparrows, mourning doves, and starlings.

At this point the cirrocumulus clouds were starting to develop nicely in the sky. And a plane took off from Lunken. In this shot we’re looking towards the dog park. 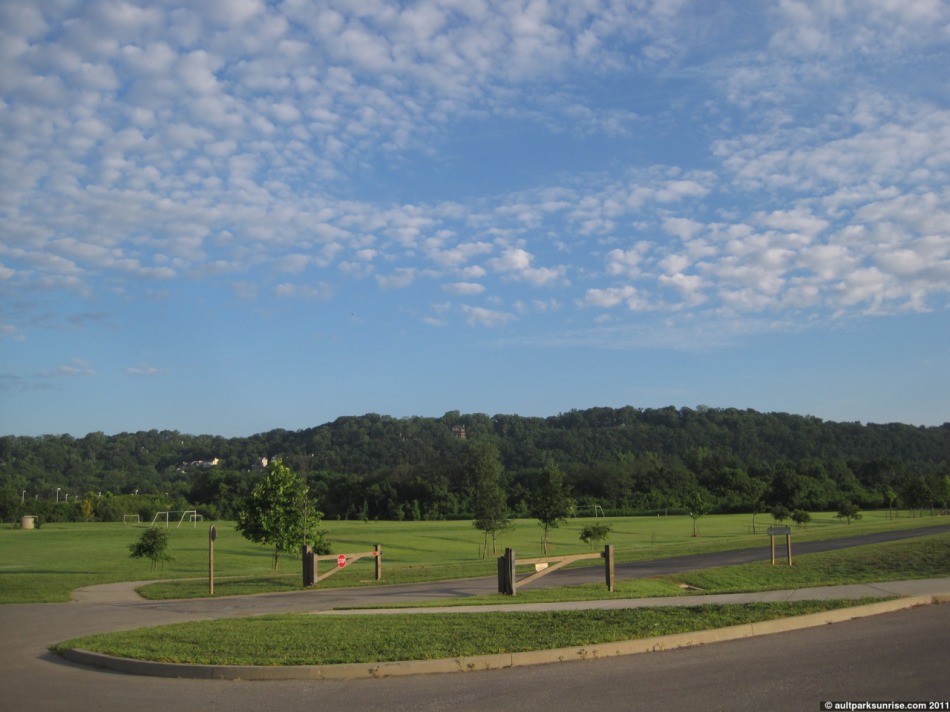 At the top of that hill is Heekin Overlook, where we started (and will end) this trip.

There is this old pedestrian bridge that takes me from Eastern Ave to the neighborhood by Armleder Park. Now that Linwood Public School (background of picture) is closed, I wonder how long until this pedestrian bridge (that would have been used by the school to access Linwood Park) will be maintained?

Looking out from the pavilion, trying to get a shot of the park and clouds.

The brightness bleached out my camera’s cmos sensor, but I like the way it turned out.

Saved one of the best for last. Buried at the bottom, this gradient sky was one of my favorites.