A shot through the trees and the billowing smoke.

Perhaps my favorite sunrise picture of the morning. The airplane, having just taken off from Lunken Airfield, heading off into the sunrise. 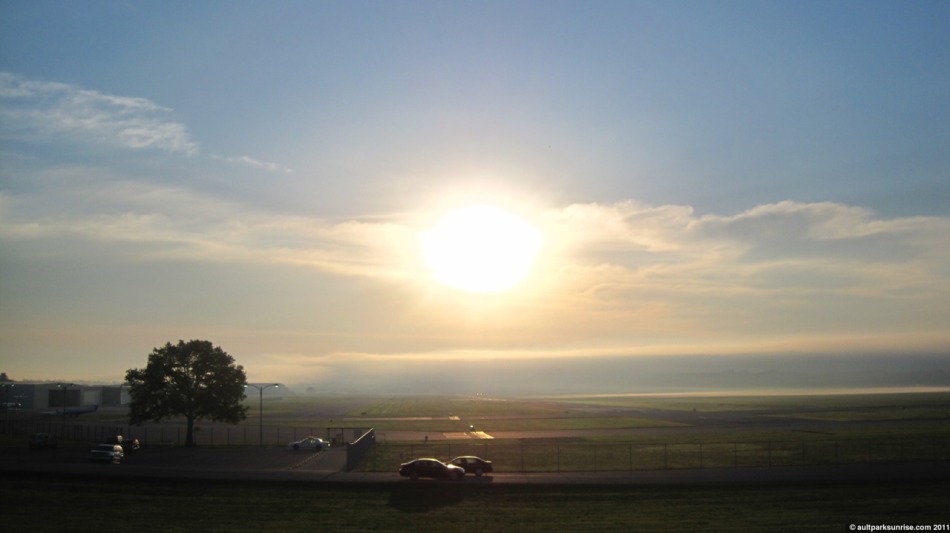 Up the East/West runway down at Lunken Airfield. Not a single plane took off while I was there.

Looking up river around the bend. There goes the barge.

This morning’s sunrise was a bright one. It was one of the classic spring mornings where the fog is thick across the valley and the sky is mostly clear. I got up a bit late so I arrived at Heekin Overlook just as the sun was coming up. As I’ve mentioned previously I don’t actually have a direct view of the sunrise any more from Ault Park, due to how far to the left the sun has moved as we approach Summer Solstice. After June 21 the sun will revert back along the path to the east, eventually aligning once more with the Ault Park Pavilion. It is possible now that I think about it that the Pavilion might be aligned with the Winter Solstice (December 20-21), as that would be a point when the sun would be much further to the right (looking out at the Little Miami River Valley). I’ll have to make a mental note of that.

I unfortunately won’t be in Cincinnati during the summer solstice. Amanda and I are taking a trip out west through San Fransisco and Sacramento California. I hope to get some sunrise pictures (depending on our schedule and where we’re at) along the way. I *definitely* intend to get a sunrise for Summer Solstice but I’ll have to wait until next week to find a vantage point.

This morning would have been a great time to be at the Overlook 20 minutes before the sunrise. The haze was doing two main things to the sun light. First, it was scattering the rays throughout the sky, causing the twilight atmosphere to light up substantially prior to the sunrise. The second thing was that it was also blocking most of the orange / yellow light, so the early morning sky had a bright pink / purple-ish tint to it.

I spent the first 20 minutes after sunrise in Ault Park. After watching the sun come up, and peering down into the valley at the thick foggy layer, I decided that I wanted to try out, for the second time, the new route that I “created” that takes me from Heekin Overlook to Lunken Airfield to the “Marina” to Alms Park and back to Mt. Lookout. I was feeling up to task of knocking out the 9 mile loop in under an hour. I am considering adding this route to the daily (or psuedo-daily) morning ritual. I think it would be neat to start at Ault Park, do the loop, and take pictures at the same landmarks along the way. It would be an extension to the existing Ault Park Sunrise project. The landmarks along the way would be:

There are many other smaller, or auxiliary, landmarks along the way. Cemeteries, churches, the airport terminal, historic  homes and old industry. In fact it would be neat to make an Android or iPhone App that provided drop-dead simple ways to “check in” and upload a picture at each landmark. A kind of collaborative urban cycling picture project. There is enough diversity along the route, and it is relatively quick with low traffic, that I think a lot of people would enjoy riding it. Here’s a map of the route: Ault Park -> Lunken Airfield -> Ohio River Launch Club -> Alms Park

Speaking of bike routes, yesterday marked a new achievement for me. I biked to the University of Cincinnati’s Campus from Mt. Lookout. Google Maps provided me with a route that skipped most of the major roads and was almost entirely urban residential. It was an awesome, if not exhausting, experience. I’ve mapped the route (one-way) on mapmyrun. Mt. Lookout to the University of Cincinnati via Fairfax/Lincoln Ave. The way to campus took about 35 minutes and was, to my surprise, almost entirely uphill. The ride back, however, was fun and more than made up for any discomfort from the ride in the opposite direction. Almost entirely downhill (slight grade mostly), I was able to get home in about 20 minutes and for the most part maintain a decent speed on par with the light traffic. The traffic was almost non-existant in the morning when I left, and on the way back (around 4:30pm) there was moderate traffic but because 80% of the route is through residential areas, traffic was mostly at a minimum.

On the the sunrise. 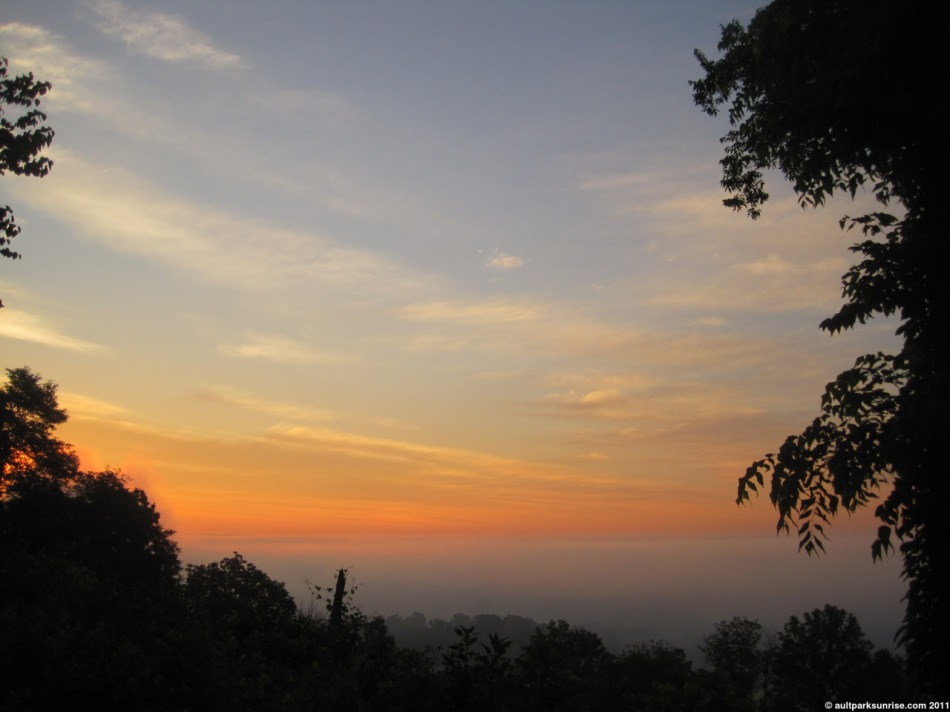 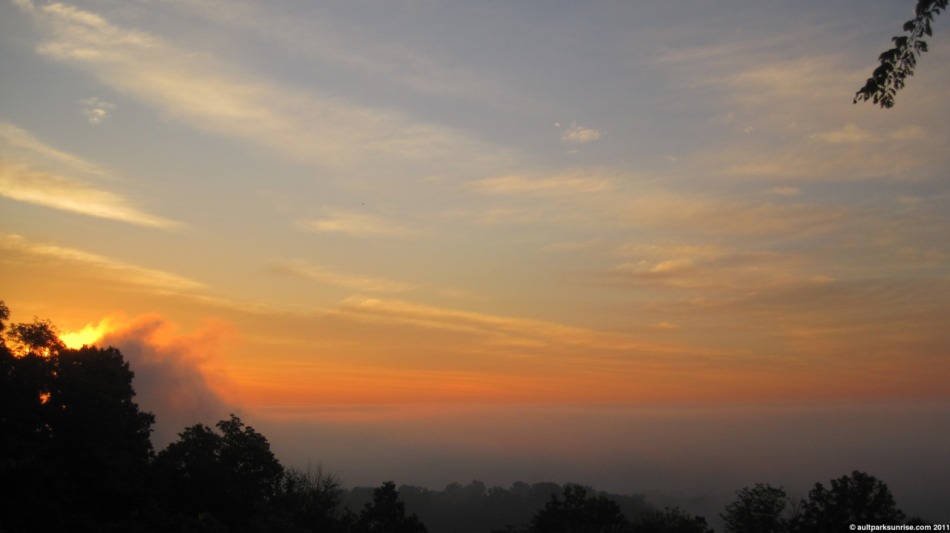 The smoke / fog over on the left was obscuring the sun.

If you’re on the front page, click to continue. Linwood Public + Lunken + Marina —-> 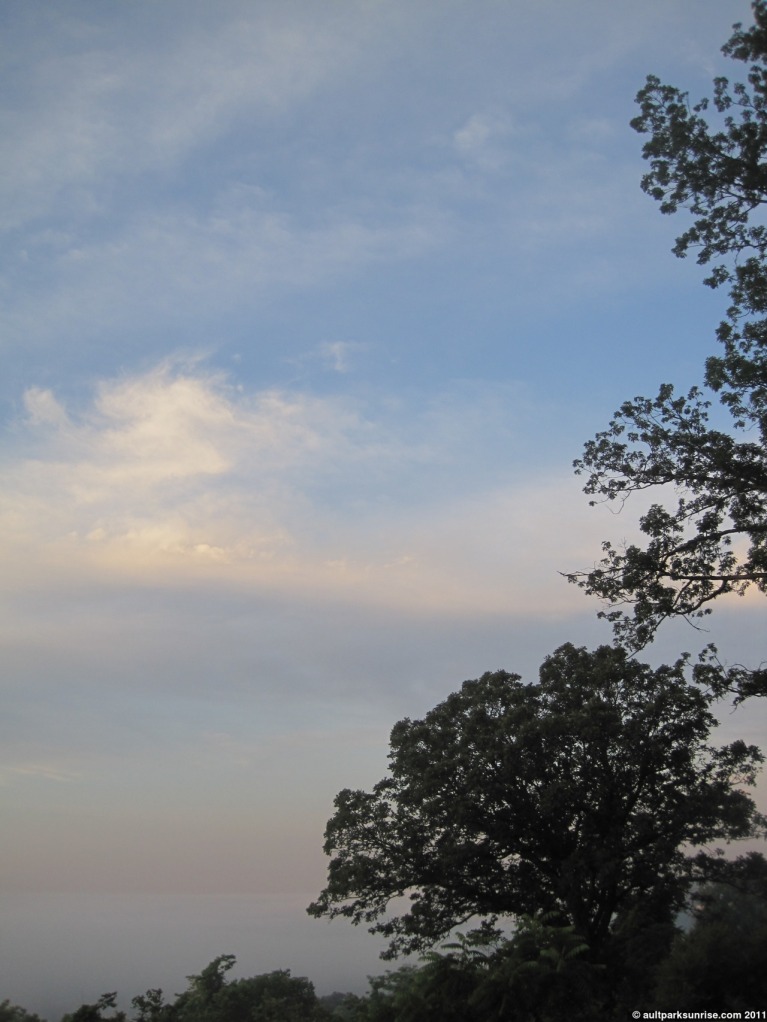 Looking west, out at Lunken Airfield

Another shot of the sun through the smoke cloud

Heekin Overlook against the foggy sunrise

Looking out at the Little Miami River Valley 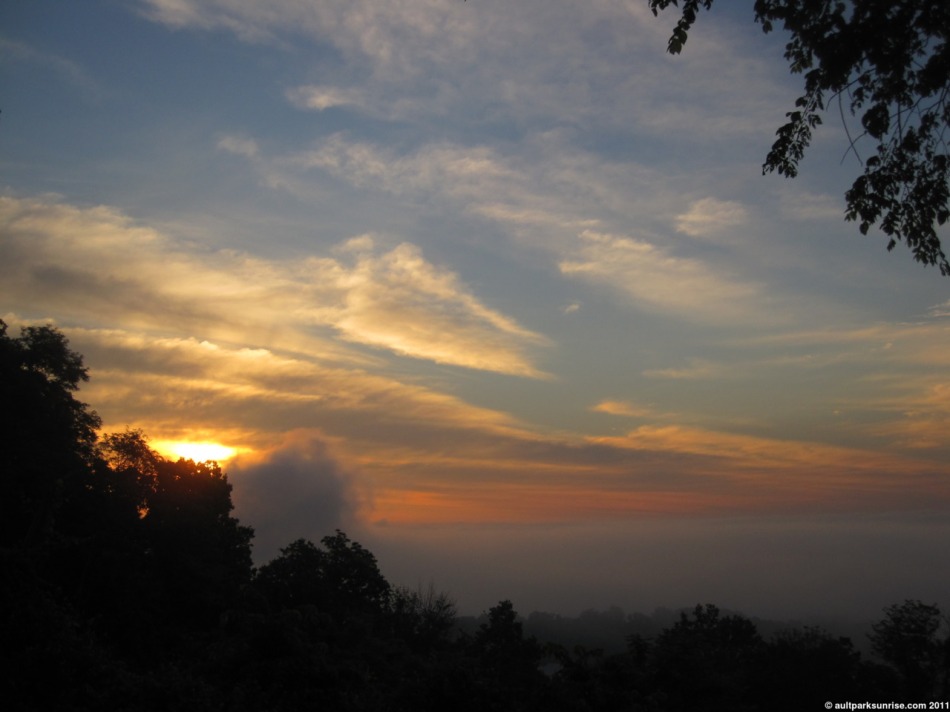 Sunrise over the valley.

A few minutes after sunrise, the fog began to retreat. The office buildings and the entrance to Armleder Park were exposed 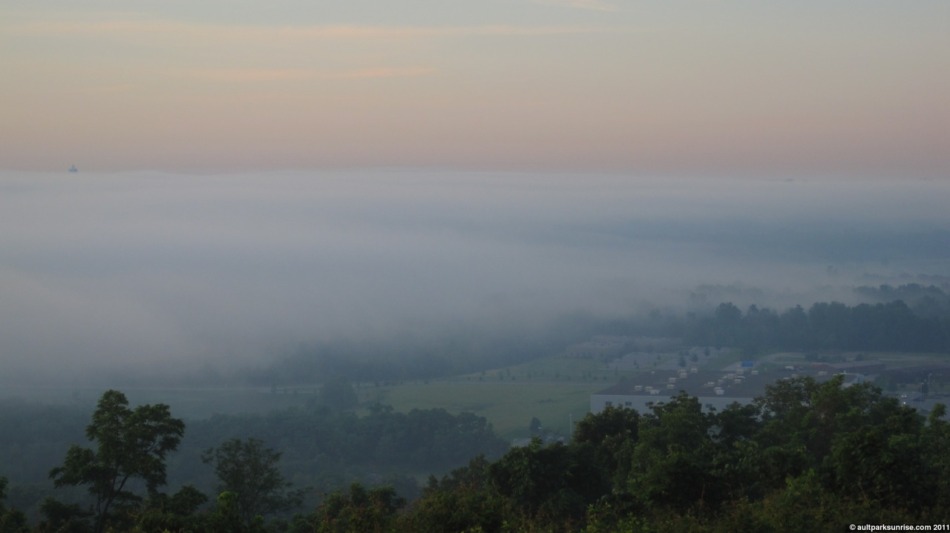 Looking down at the entrance to Armleder Park. Note the water tower (or steeple) rising up out of the fog on the horizon.

As I’ve got the camera focused, a plane takes off from Lunken. I’ve seen this plane several times now, it has been leaving Lunken around the same time many mornings (quarter ’til 7:00am).

I took off down the hill toward Lunken Airfield. I decided to only stop along the way to take pictures if there was really something worth documenting. I always love looking at the Linwood Public School and its Italianate tower. The tower reminds me a lot of the radio tower at the US Playing Card Company. I continued through East End, stopping to have a cup of coffee at the Lunken Terminal trail entrance. I didn’t stick around too long. 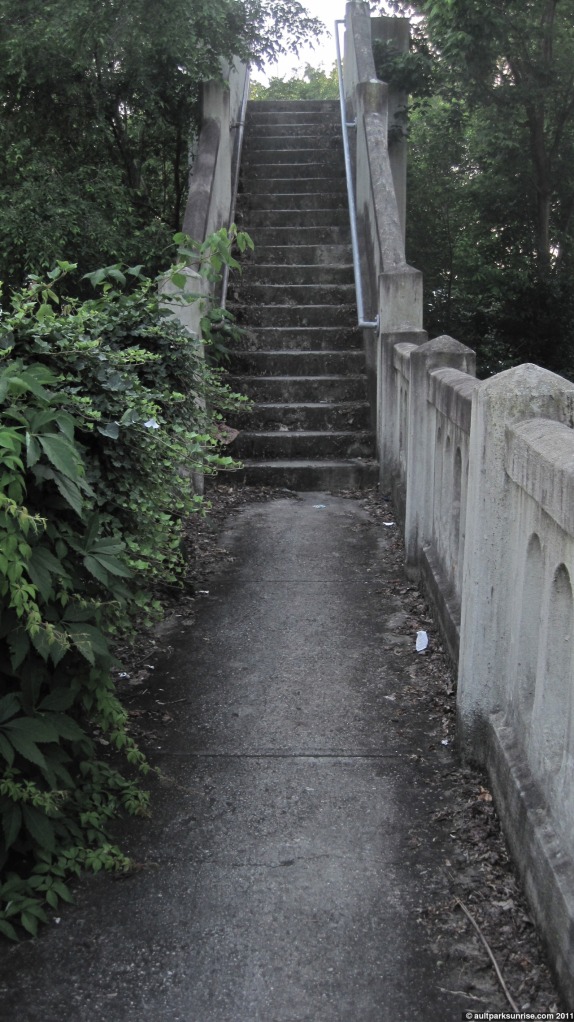 Across the street, a century+ old stone stairwell that is still in use. It takes a pedestrian over the railroad tracks and down to Linwood Park. Also a great way to access Armleder Park if you don’t mind picking up your bike.

Arriving at Lunken Airfield. The sun was bright and there was still evidence of fog, but it has mostly cleared out.

Black and White for dramatic effect!

Looking South/East. These buildings are old. In the distance you can see the trees popping up through the fog. They are actually up on a levee that protects the airfield from the Little Miami River during flooding season.

Mt. Tusculum! Alms Park is up there at the top. 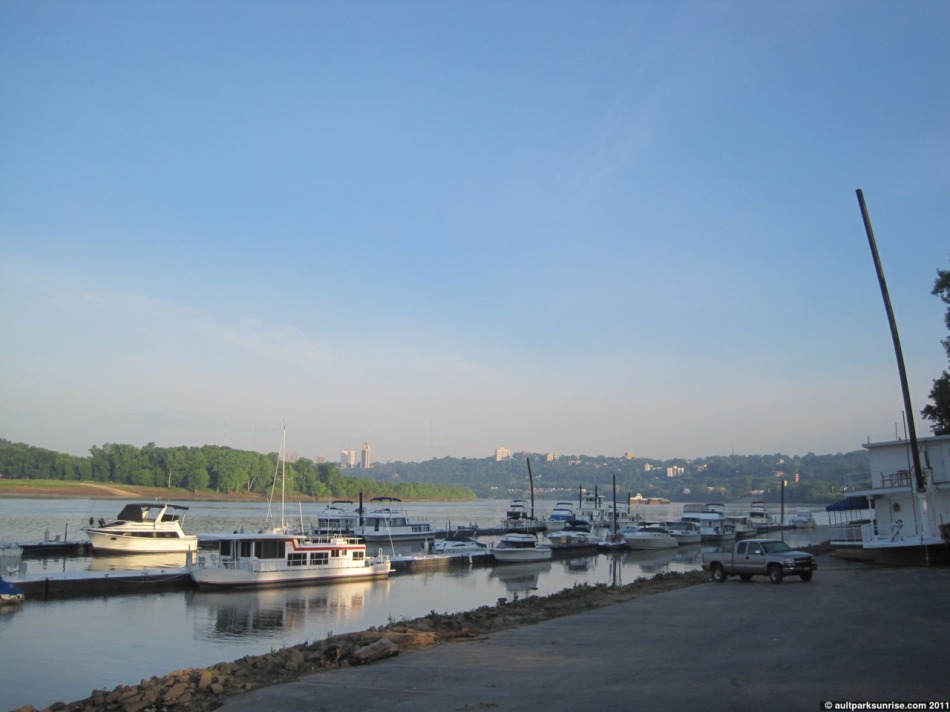 The Ohio River had no fog to speak of this morning. It looked crisp and colorful in the early morning light. This shot is looking downriver towards Mt. Adams. 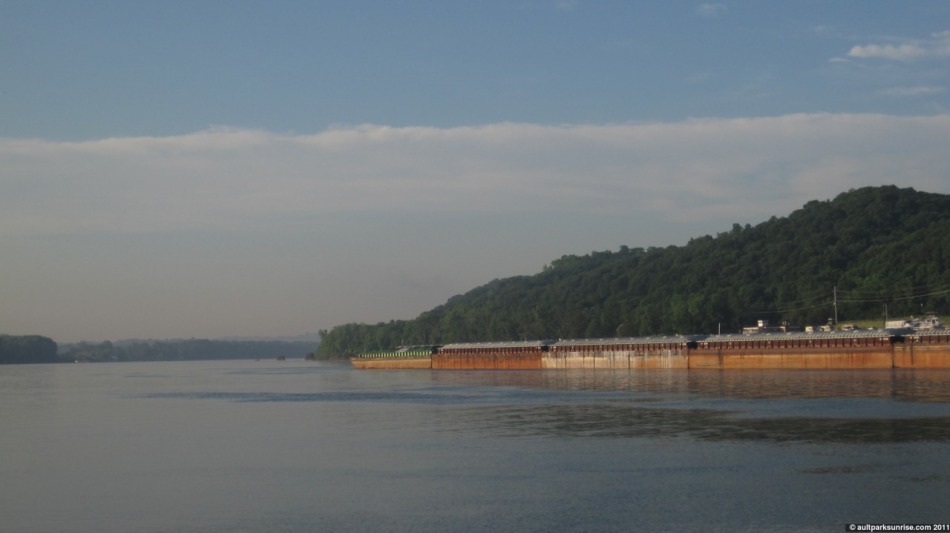 The front of the barge. 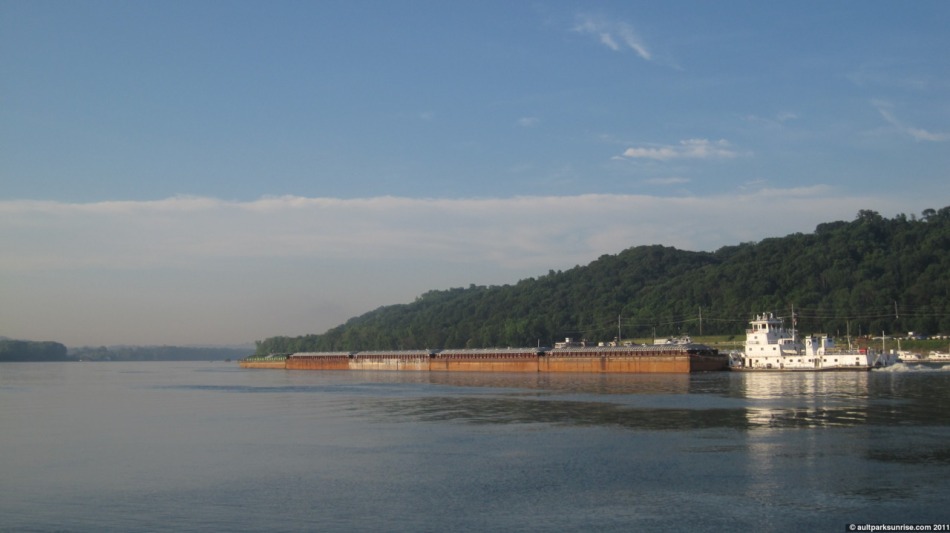 Finally I’m able to capture the barge entirely. This sucker was loooong.

On this particular morning I didn’t end up going all the way up to Alms Park. That takes some serious commitment, I didn’t quite feel it this morning.

I think I’m going to try this route more often. If I stay focused I can knock it out in about 45 minutes – probably sooner.