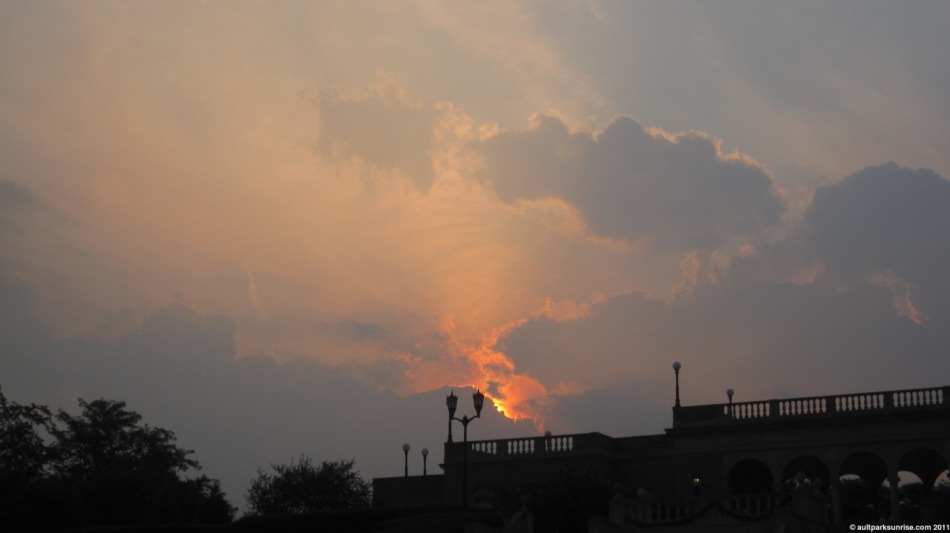 An hour later the sunrise arrived

The trip up to the park this morning was pleasant if not a bit dark. There was a cloudy layer across the sky, a new development that must have occurred over night. I sat at the overlook and enjoyed the view out over the misty valley, listening to the birds and squirrels in the trees around me.

The sunrise was non-existent behind the thick layer of clouds but the sky was actively moving around. After about twenty minutes, I started to notice that the ambient light seemed to be getting darker around me. The overlook seemed to be in shadows while out in the valley it was still a bright gray. 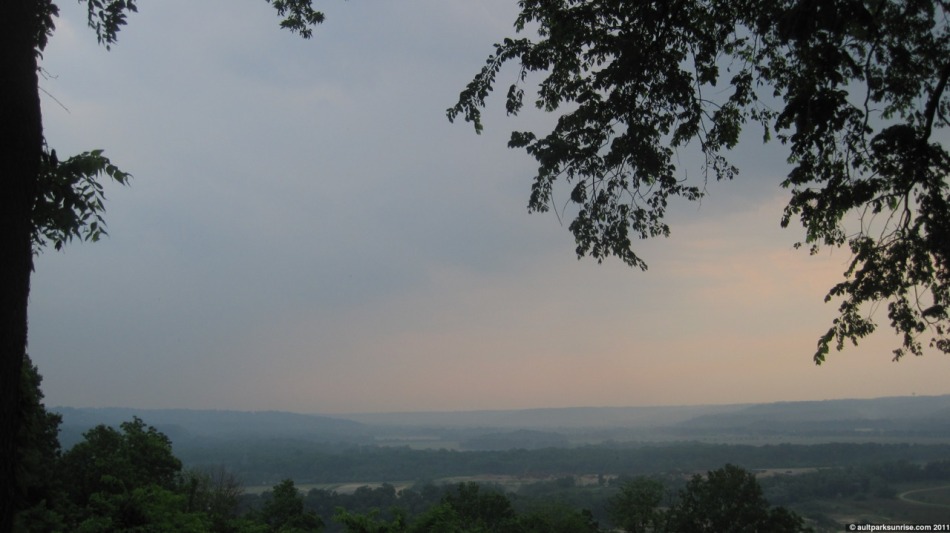 The wind picked up and gradient gray cloud was blown across the valley. It got dark fast, but that didn’t last very long.

I turned around behind me and saw that there were dark clouds coming. The wind picked up, a warm humid breeze, and the birds quickly died down their chatter – no doubt waiting in anticipation to see what the sky was going to do. The wind maintained a steady force for about fifteen minutes, gusting here and there and moving the dark clouds over my head and across the valley. 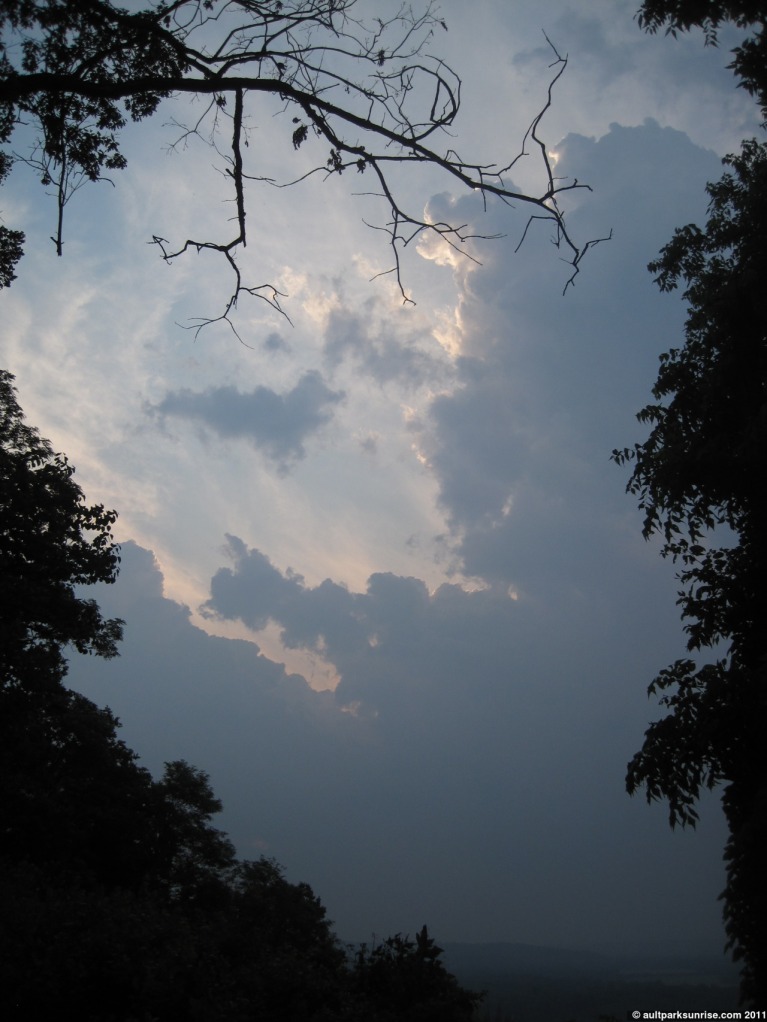 Soon, however, it became apparent that the newly arrived clouds were more of a puffy cumulus type and they quickly pushed out the flat gray layers that were blocking the sun. In the upper atmosphere above me I watched as, ever so slowly, several inky formations started to appear against the light blue sky. This was all happening at a position in the sky much higher than the sun, so there were interesting shadows and illuminations that were caused by the sun’s rays coming in from “below” and behind the clouds. 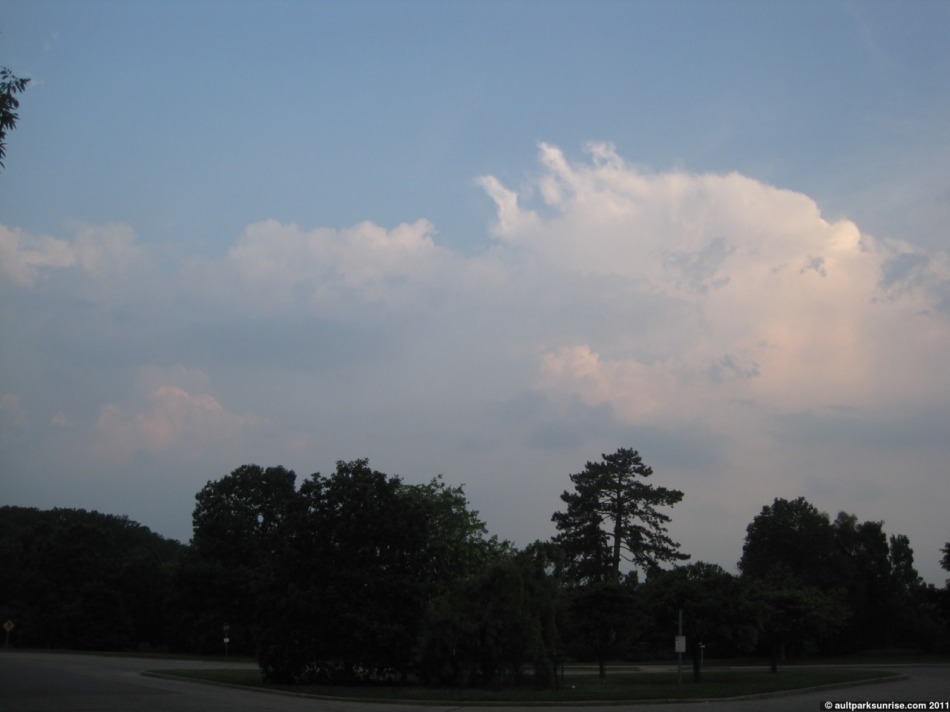 Behind me, above the park, blue skies.

I realized that there might be a chance for a sunrise after all so I hopped on my bike and headed over to the arboretum. The formations were partially blocked by the trees at the overlook but in the lawn behind the pavilion the sky was open.

Ault Park’s Pavilion. I sat at a bench to see if the sun was going to show up

As the large cumulus clouds shifted about, there was a period of about 2 minutes where the faintest orange highlight slowly grew into a bright blaze as the sun came through an opening above the clouds. At exactly 55 minutes after true sunrise, I finally got a morning show. Sometimes you’ve just gotta wait it out.

The last few days were full of clear skies in the morning. Today was different with a low cloud layer and moving cumulii. (I just made that word up). If I were to guess, I’d say that later today there is a good chance of some more dynamic pressure movement – namely a chance of thunderstorms :). Looking at the weather forecast it appears that I’m late to the party. As I write this the sun is shining through a bright blue/gray sky.

This entry was posted on June 9, 2011 by Ault Park Sunrise. It was filed under ault park, overcast, slightly cloudy, sunrise and was tagged with ault park, cincinnati, cumulus.