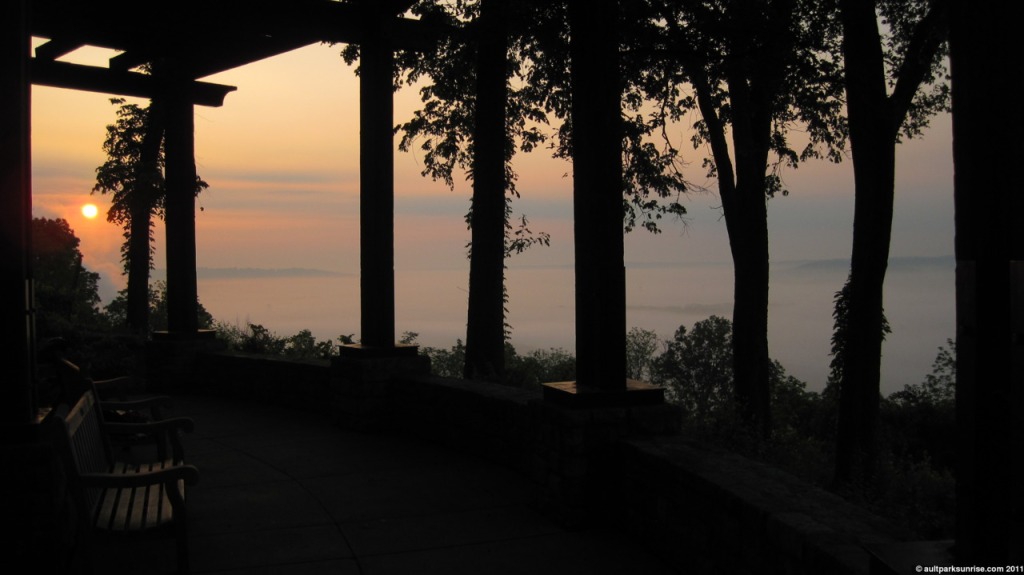 When I first woke up this morning, 25 minutes before sunrise because I forgot to brew my coffee last night, I was a bit disappointed. The sky was a dark shade of gray, typically indicating that the sun is blocked by a cloud bank (or even worse, an entire overcast sky). I should have known, however, because the “bird report” was in full swing at 5:45am, loud enough to wake us up! After brewing my coffee I set out on the Trek 4000 for the morning. When I walked out onto the front sidewalk, however, I realized that there was a substantial amount of fog in the air. It is always a surprise to see the fog – the best kind of surprise I might add 🙂 Biking in the fog (especially now that I have my new planet bike led light) is always so much fun, particularly in low-traffic hilly residential areas like on the route to Ault Park! As I would soon find out, this morning ended up being the long awaited, eight-days-in-the-making, soul-refreshing, sunrise morning. I haven’t had a post on here with the sun in it since last week and while I do love exploring random historical artifacts in the area, being able to take pictures of the morning sun is a welcome change from the routine of the past few days 🙂

The patchy foggy climb to the park

As I made my way up to the top of the hill, I started to notice a change in the atmosphere. It seemed that the higher up the hill I got, the more clear the air became. As I came up above the crest, into the entrance to the park, I started to see signs of great things to come. The sky up ahead was turning a light orange color and I could actually see a low lying cloud through the trees. 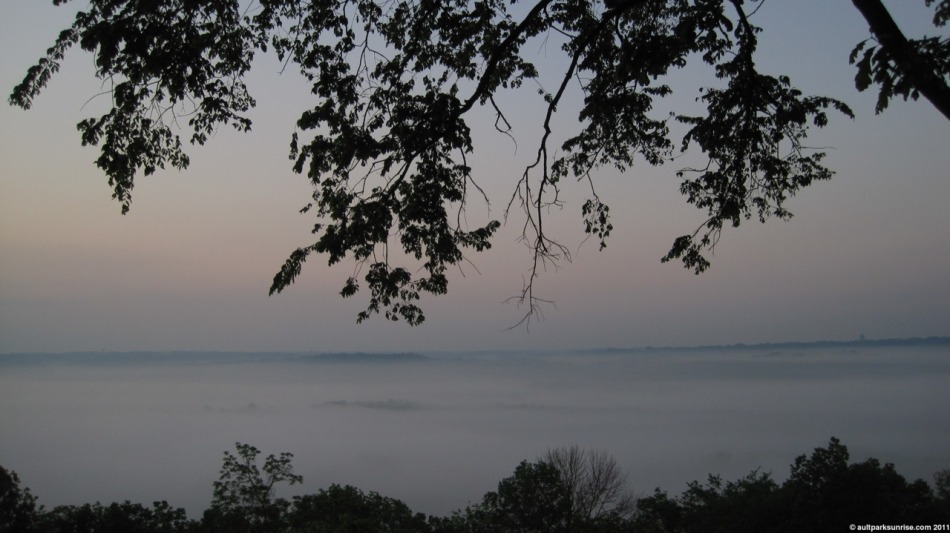 The sky is just starting to turn orange. If you’re on the front page, please continue by clicking! –>

You can barely see the tips of the telephone poles 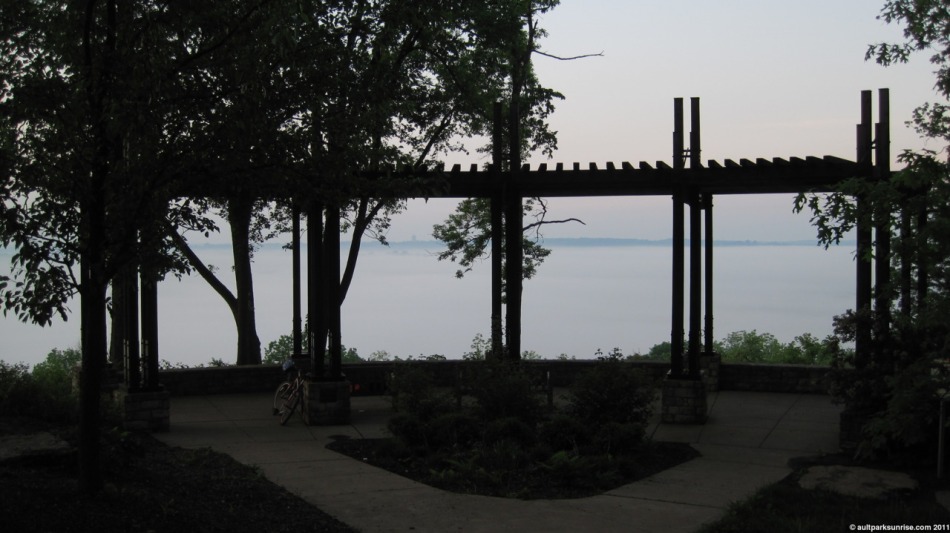 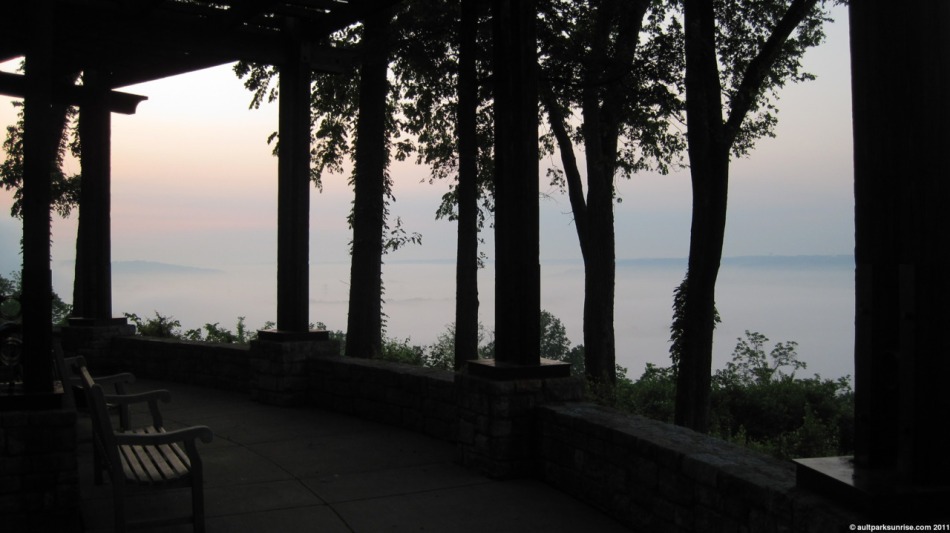 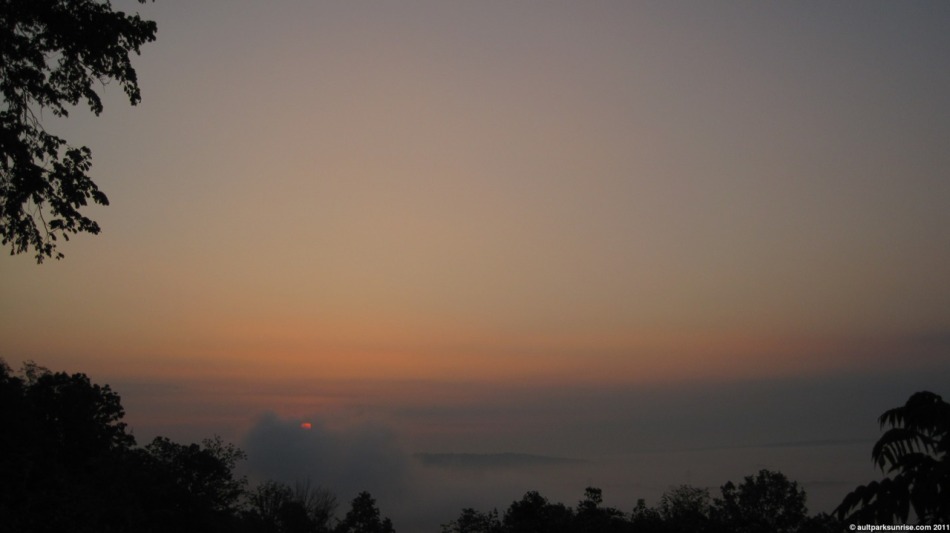 The sun, for the first time in eight days.

As it turned out, that low lying cloud was actually a super thick fog bank down in the valley. In fact, the sky was almost clear of clouds! Now that the fog had almost completely dissipated, I could see the blue sky above me. I sat down for the first sunrise in eight days. Eight! The fog of this morning, while incredibly thick, seemed to have less depth to it. I could see the tops of telephone poles and trees clearly down in the valley below. Much better than an all encompassing fog that leaves nothing but featureless flat gray. 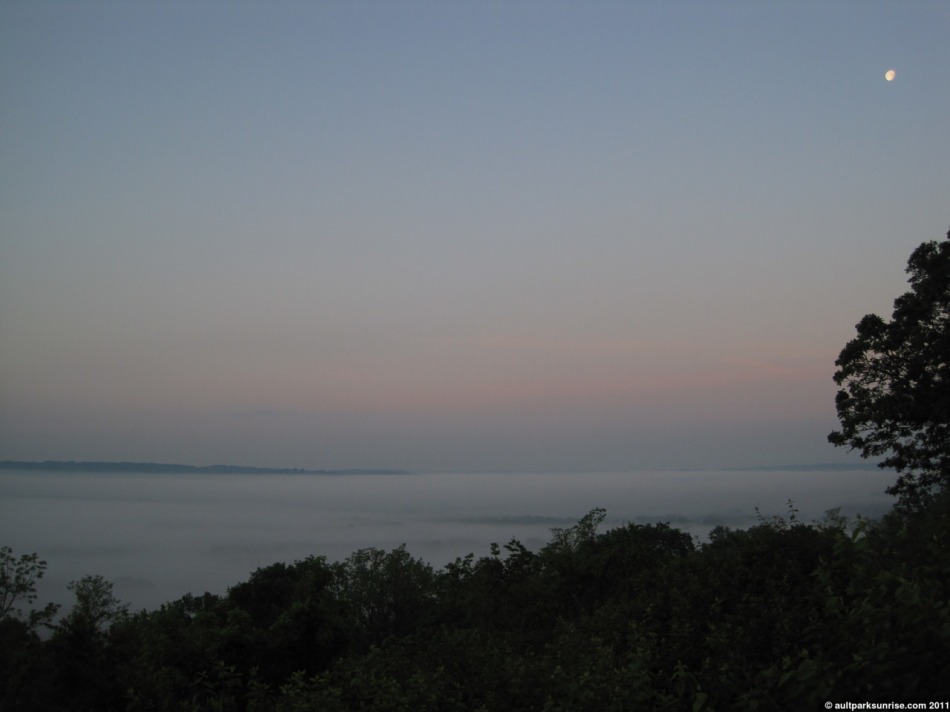 It was also a nice morning because the moon was out high above on the western sky. I forgot that I had marked “May 17th” as a day when the moon rose right at sunrise. It would have been a “new moon”, so I probably wouldn’t have been able to see it anyway. Two or three days after the new moon, when the moon has shifted higher into the sky and further away from the sun, it becomes more full so it is easier to see. In other words, when the moon is close to the sun at sunrise, we can’t see the lit-up side of it. When it is far away from the sun (like in the western sky) at sunrise, it is a full moon. Make sense? In summary – if you ever seen a full moon rising up in the eastern sky with the sun, you’re probably in a dream! 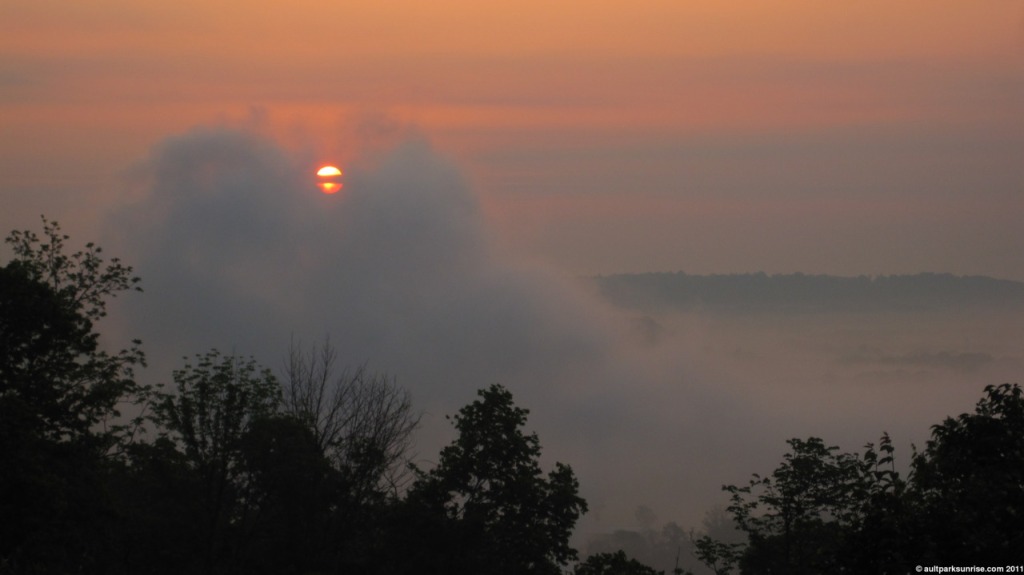 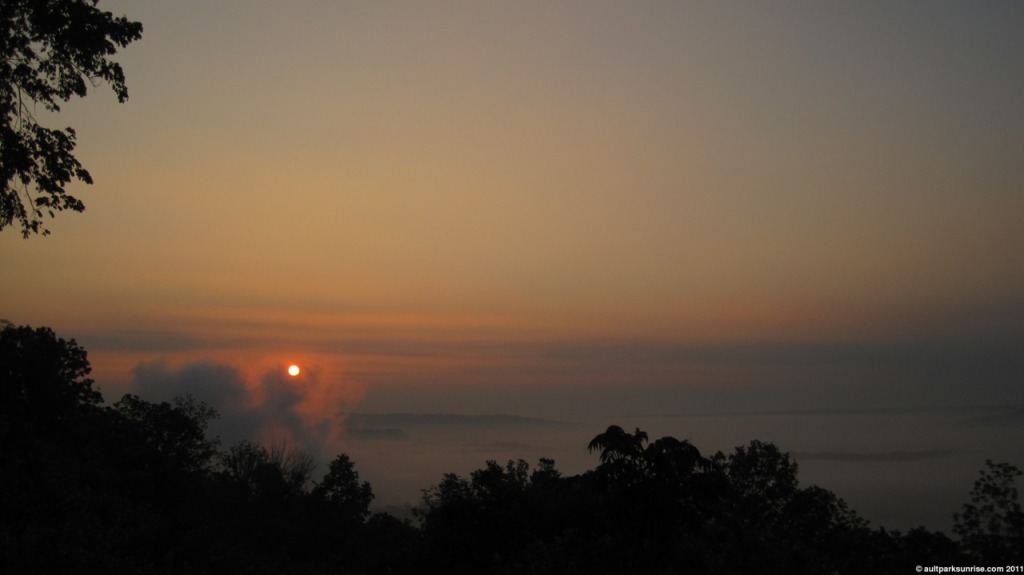 Not much color, but pretty none the less! 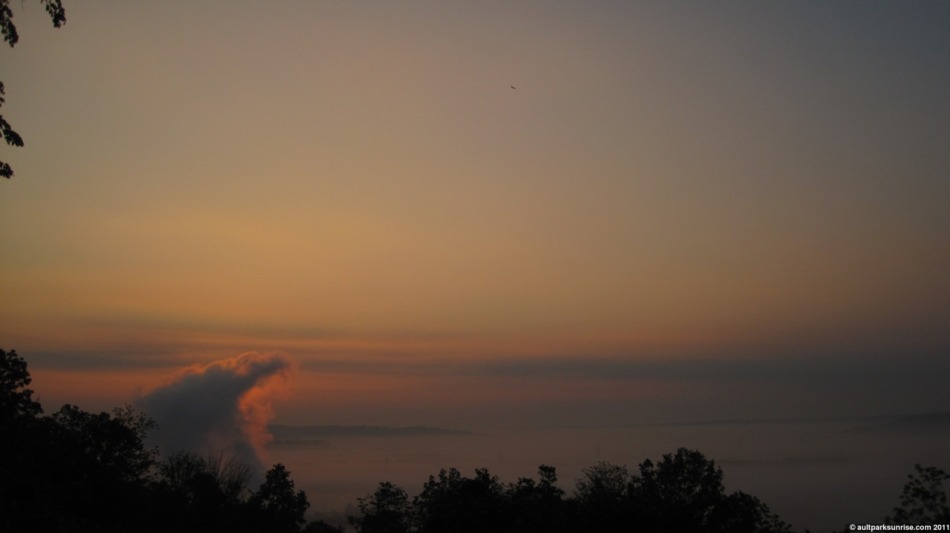 The foggy valley with a plume of smoke / fog coming up on the left. 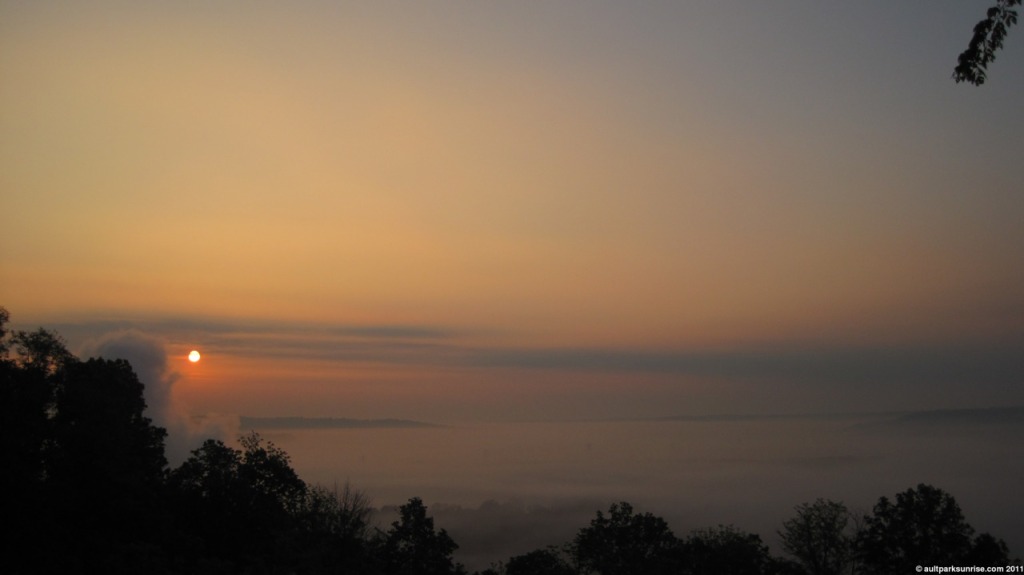 The sunrise was quiet and conservative, very appropriate after a week of absence. As the sun came up slowly over the horizon, with fog blocking most of the direct light and no clouds in the sky to scatter the reds, oranges, and pinks. Certainly not the most explosive of sunrises, but a unique one none the less especially with the thick fog bank below.

After enjoying the beautiful sunrise, I realized that there was a good chance that Alms Park, being on the western side of the hill, would still be thick in the morning fog. I decided that I wasn’t one to waste such a beautiful Friday morning, so I set off to make the 20 minute trip up to Alms Park to get a different perspective on this “rare” sunrise. If I’m lucky it may still be foggy. 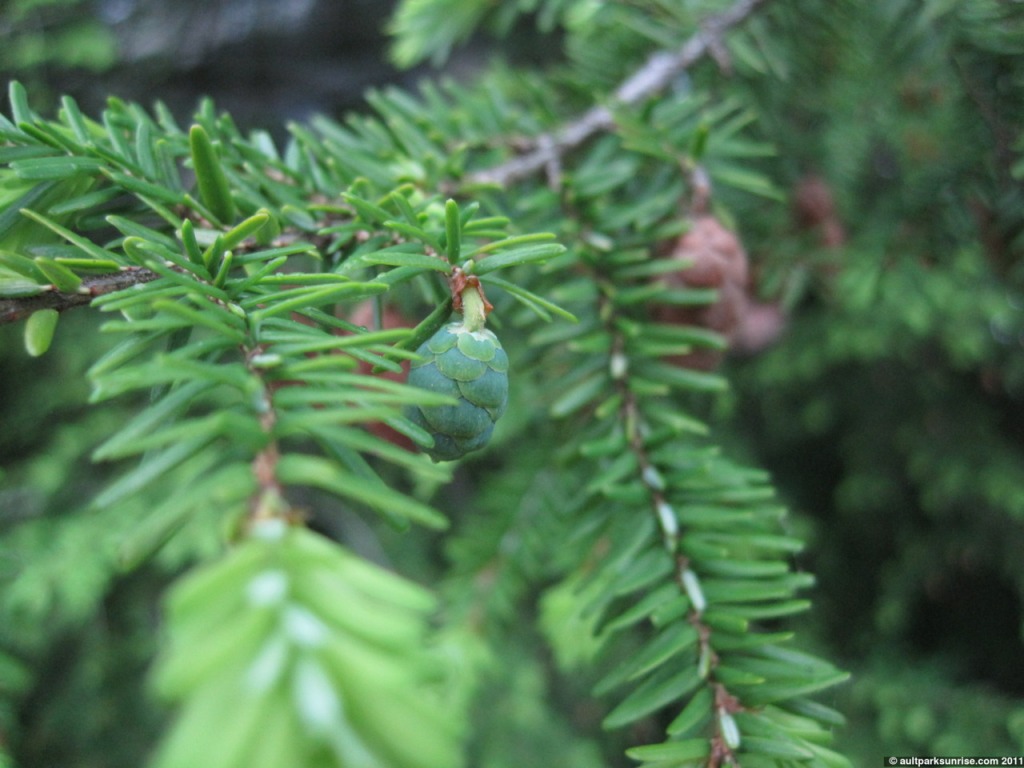 Here’s another juniper cone from the conifer tree’s that I stopped by yesterday morning.

As I wound my way through the neighborhoods and across Linwood Avenue, it became apparent that the fog from earlier was almost completely gone. Hasn’t it only been 20 minutes? One of these mornings we’ll get the rare “seasonal fog” that I’ve been waiting for, patiently, for a few weeks. I’ve noticed that it happens in Cincinnati about twice per seasonal change – both in the spring and autumn. This fog is thick with maybe 20 feet visibility. If you’re lucky enough to get a clear sky above the fog with the sun shining through, the parks and neighborhoods become a wonderland cast in long shadows and rays of sunlight. This morning is not one of those mornings! 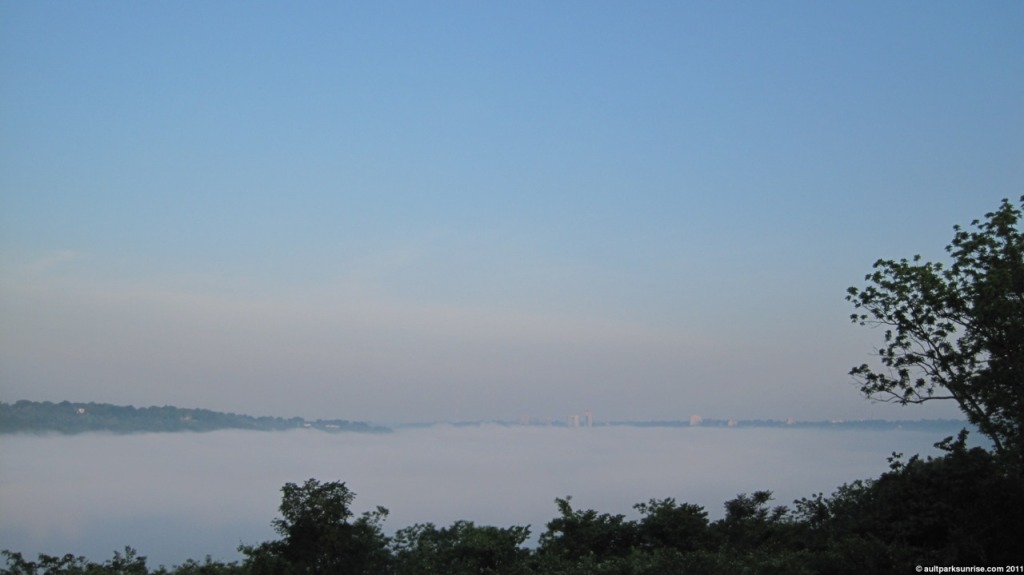 As it turns out, there wasn’t much fog in Alms Park either. But the view down the Ohio River Valley was impressive. The tops of the hills both on the Kentucky side and down the way on the Ohio Side (Mt. Adams) were clear and visible. The thick fog sat down below on top of the river in the same way that it sat down below Ault Park in the Little Miami River Valley. Down below on the river I could hear the long moaning of a barge heading downriver, no doubt trying his best not to hit anything on the river.

For comparison, here is a picture of the Ohio River overlook that I took last night at sunset. It isn’t quite centered because I was trying to quickly get a picture of the young buck that was jumping over the sidewalk. 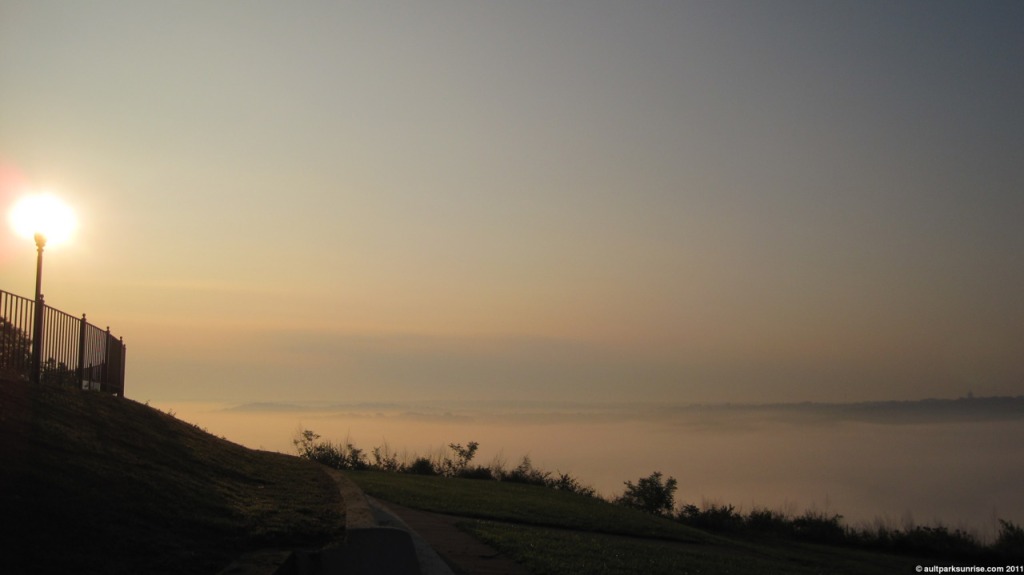 Thats the sun, not a street lamp. Looking over Lunken Airfield and Reeves Golf Course from Alms Park

Can you believe there is an airport down there??

The ‘ol Trek 400 that I’m borrowing from Geoff. I get my crank today on the Fuji!

Lunken Airfield was completely submerged below the foggy layers. I waited around for a plane to take off but I think not a single plane came in or left the airport. They were probably waiting for the fog to go away, honestly, because it looked really thick down there. Although it would have been pretty awesome to see an old prop plane slowly emerge from the fog bank into the clear sky. 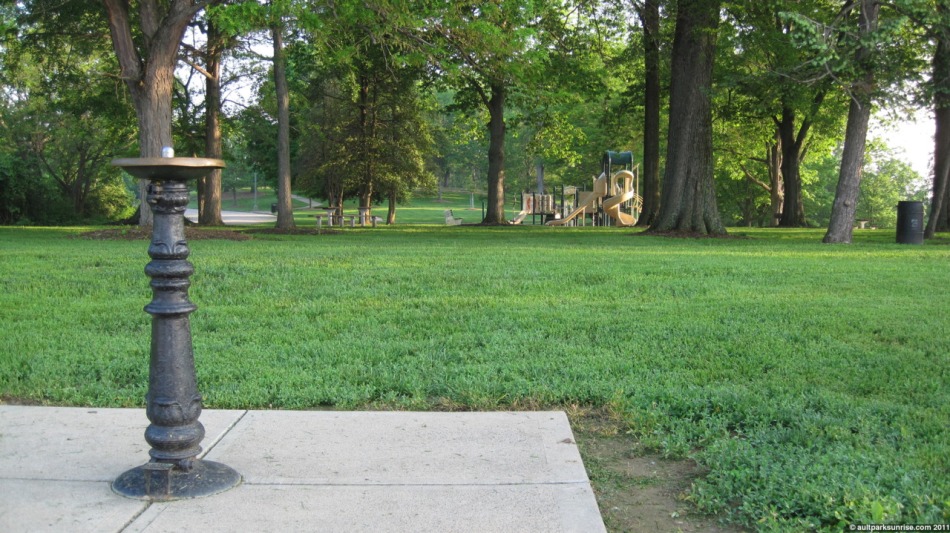 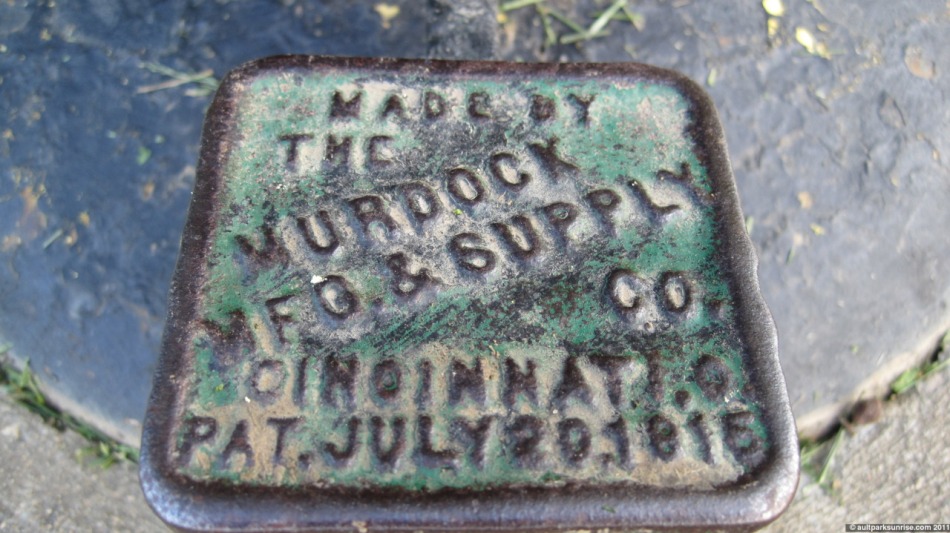 On the way out of the park I stopped to document the Murdock Fountain that lives in Alms Park. This fountain is of the early 1900s version. You can tell because of the “bubbly” design going up the post, in contrast to the more “post-modern” straight rigid pole that marks the 1960s model (both are found in Ault Park). The pedal of the fountain is the standard one found with these older models with the 1915 patent marking. Although, now that I re-look at this picture, it kind of looks like it says “Patented 1815”. Now I’m not sure because both make sense, and 1815 makes even more sense. The original Murdock fountain design dates back to 1776 I believe, so an early 1800s patent would be appropriate. Hmm. Anyway, Alms Park was not established until 1916 so this probably dates to within the first decade after the grand opening. It is more likely that it was built in the 1930s, although that is just a guess, which would put it in line with the 1937 water support structure I found down in the woods. 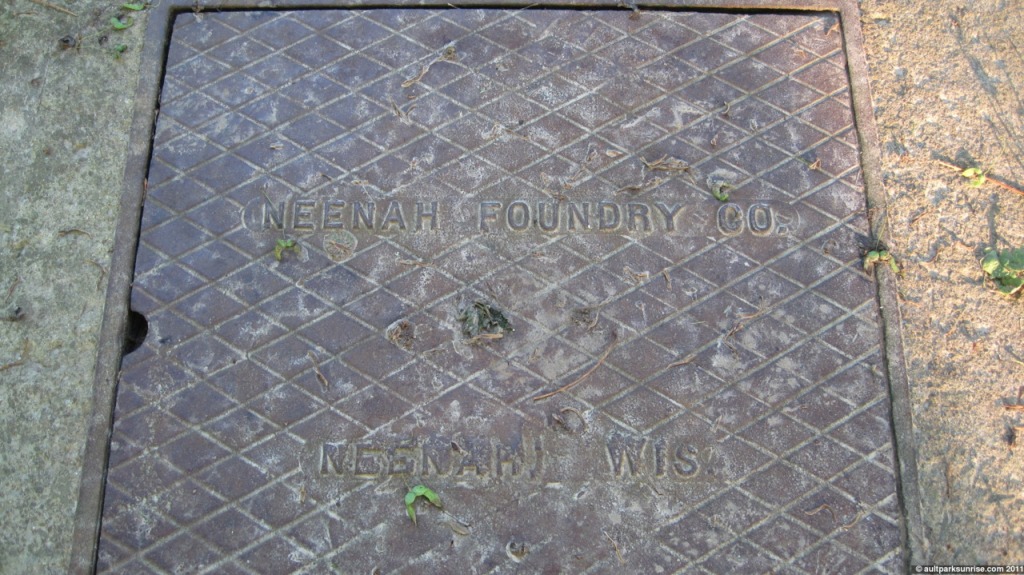 This “Neenah Foundry Company” steel water cover is located just across the road from the Wine Cellar in Alms Park. Normally I wouldn’t pay attention to it, of course, but you never know where these rabbit holes will lead you. This no doubt is connected to the water support facilities, and likely to the aforementioned 1937 “well” cap in the forest. After googling the name of the company, I found their history on their website. It turns out that they date back to the Civil War period, when they were Aylward Plow Works, and changed their name to the “Neenah Foundry Company” in 1922. The company produced their first industrial products in 1928. This would squarely put the Murdock Fountain as being from that same time period, because how could you have a water fountain without a water support system? 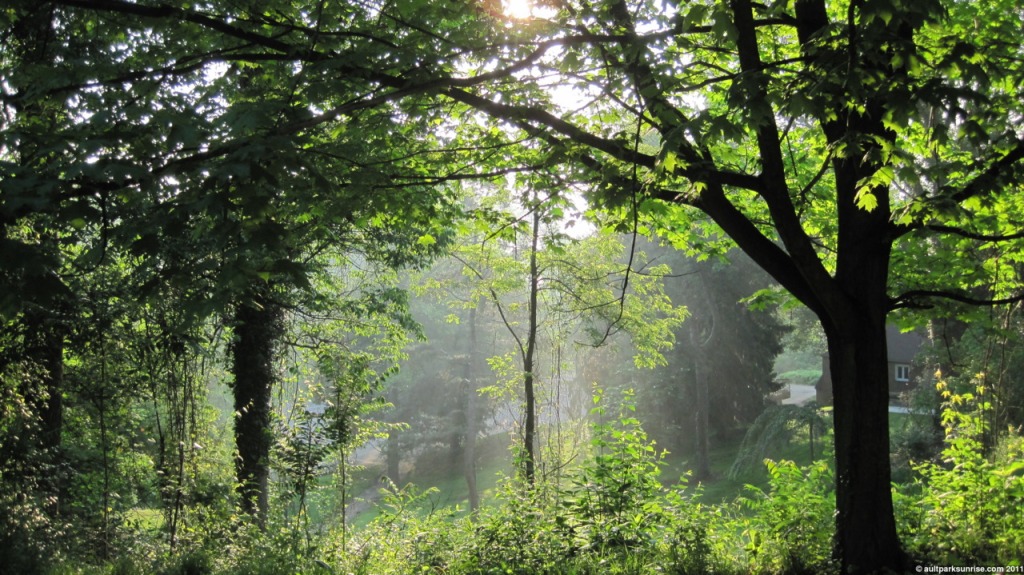 On the way out of the park, I got some interesting pictures of the sun coming through the trees with the rays traced by the slight fog that was still left in the air.

On the way home I couldn’t resist taking this picture of a local home. The first thing to notice about this home is the architectural style. In these old neighborhoods that date to the early 1900s, there are many kinds of architectures that can be used to date the home to the time period when it was built. You can pick out the “first settlers” to the area because they take on the familiar “farmhouse” look. Rectangle, brick, typically with five windows and a center front door. Some of the homes have been painted over, some of them have been extended. Some of them are likely even a “later model” when designers started to get fancy with existing designs before branching into more “modern” styles from scratch. There are some large “farmhouse inspired” homes that may have 7, or even 9 windows and be twice as long as these original homes. At one time I thought these homes were simply “inspired” by farmhouses, no doubt a remnant of the country life that many early suburban settlers were used to at a time in history where more people lived on the farm than in the city. But now that I think about it, perhaps these at one time *were* farm houses. After all, now that we know about the vineyards in the area, it isn’t unlikely that this was once filled with large farm estates. Although that would place these homes to be prior to 1900 and the rise of the automobile, which is probably a stretch. After a bit of googling, I found this book on amazon that I may have to check out.

The second thing to notice about this home, and the reason I took the picture, is that the ivy is so well groomed and only takes up half of the brick. I thought that was a very interesting way to maintain a unique appearance of the classic farmhouse style.

As a final note, I just want to say I’m impressed with the WordPress team’s continuous updates for this writing platform. They added a few new features including a re-vamped “fullscreen” editor that works nicely for distraction-less posting. The picture-add is still too slow for my individual picture placing needs, but my python script works just fine for that. Thanks WordPress! My only feedback is that it seems the “text-align” buttons have disappeared from the full screen menu. But I love that they added a “save” button to the fullscreen mode, though. That’s a nice touch.