After seeing the cloudy front take over the sunset last night, I was worried that the sky this morning would be overcast. When I got out of bed and looked out the window, the was indeed a bit cloudy but it was a light covering with pockets of dark blue sky showing through. The atmosphere was on the “heavy” side of light overcast. I rode up to the park for the 6:34am sunrise but as I made my way up the hill I started to notice that the sky was darker than I would have expected. There were not any signs of orange, indicating that there was a low cloud cover over the horizon. It is worth mentioning that this week I have continued to “default” to using the second gear on my bike to go up the hills. This is something that I was unable to do even two weeks ago – the added difficulty is a welcome addition to my morning rides that are becoming easier by the day as I get into shape. Feeling a bit of pent up energy from the many rain storms, I could tell that if the lighting conditions are right I’d be taking lots of pictures today.

The sky was indeed filled with a low overcast cloud bank. The sun came up over the horizon and shined through the misty layers. 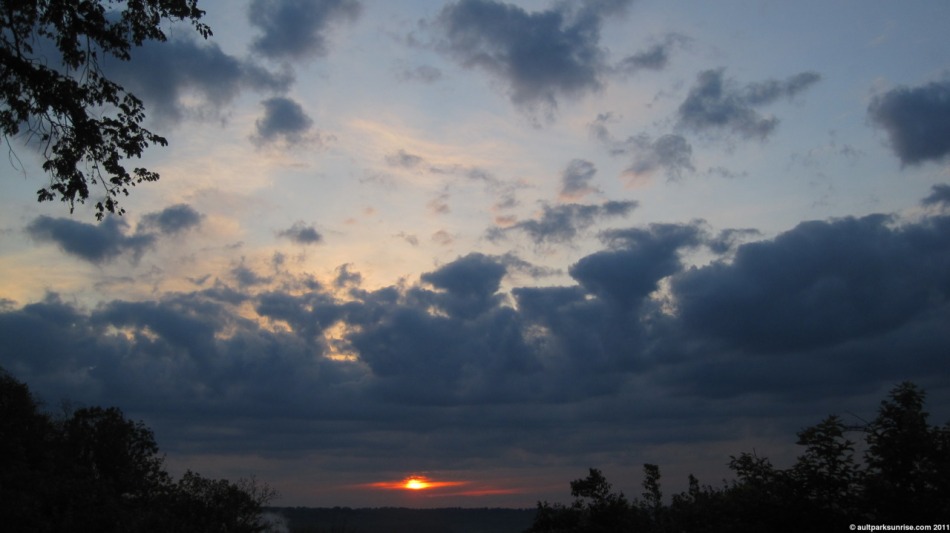 Just as I was sitting down to enjoy my coffee, my assumptions about a conservative and boring sunrise started to gather doubt. I noticed that directly above me the sky was starting to break, I could see the clear blue sky pushing away the clouds.

The clouds were moving east allowing the clear skies to slip closer and closer to the sun rise. (If you’re on the front page, please click to continue –>)

I hoped that within 20 minutes I’d have the chance to see one of my favorite kinds of cloud action – thick cumulus clouds narrowly blocking the sun with open patches of sky around and above.

I went down onto the lower overlook and checked out Armleder Park. I’m seriously impressed with how low the water level is considering how bad the flooding has been.

The asphalt paths are clear of water and it looks like they’ll be able to open the dog park soon once it dries out. I also noticed that it appears one of the sections of grass by the soccer fields may have lost all of its sod. I couldn’t quite tell what had happened to it but the grass looks like it is cut out and the bare dirt is showing through.

I hopped on the bike and rode about 200 yards to the east, over to the section of the park that is officially seemed a “prairie”. It is a small patch of open field on the edge of the forest.

I stopped by two weeks ago and noticed that the prairie grass shoots had just broken through the ground and were starting to grow. The grass has progressed a few inches by this point but the most obvious difference in the opening was the young prairie bushes that are taking advantage of the open air before the grasses grow quickly enough to compete for light.

A group of small plants that had the rough edges of feral wild flowers were blooming their purple flowers. This plant was the only blooming plant in the field, but I’m sure that will change as the spring turns into summer. I imagine that this land will be filled with grasshoppers and eye-level high grass by July.

As I was crouched down on the ground taking pictures of the purple flower (I’d like to know what the park crew, who by now have probably recognized that I show up almost every morning in weird corners of the park in my red sweatshirt, think I’m up to) I turned back around to see how the breaking front was doing.

I was met with a spectacular display by the sun, now fully above the horizon.

It was completely blocked by a large cumulus cloud and I could see the orange rays bursting around the edges of the cloud through the morning haze. I took way too many pictures of the next 15 minutes; I tried to pick the best ones to put in this post. 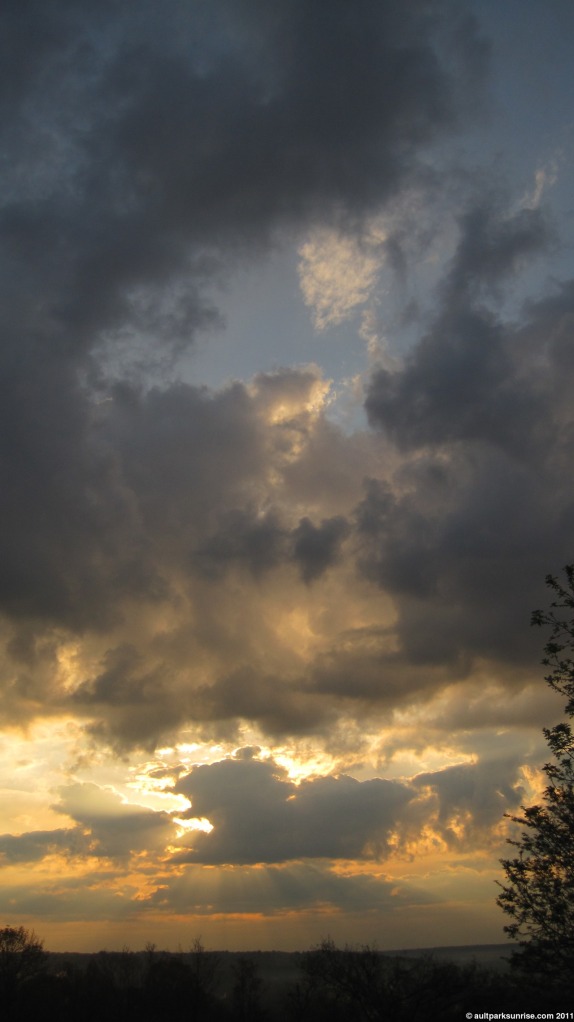 I rode up to the pavilion on the way back to the overlook (I had forgotten to take a picture of the overlook for the time lapse) and took a few angled pictures of the trust old steed against the stone structure and the sky.

While I was sitting on the steps I noticed a young caterpillar sleeping on the concrete.

I was surprised to see him out in the open considering how active the foraging birds have been.

I could tell he was probably freshly hatched because when I woke him up to see if he was alive, he curled up and lazily flailed around. He also didn’t care too much about getting away in a hurry. I imagine he is the first generation in the upcoming caterpillar hatching season. I wonder if he is at an advantage or disadvantage, having been born so early compared to his brethren?

I’ll keep my eye out for the next couple of weeks, I imagine the caterpillar sightings will only increase. I picked him up and put him onto a carefully selected juniper leaf; probably a futile move considering he wasn’t too interested in latching onto the leaves. Good luck buddy and watch out for the clever raptors.

One more picture of the bike, and I’m off. 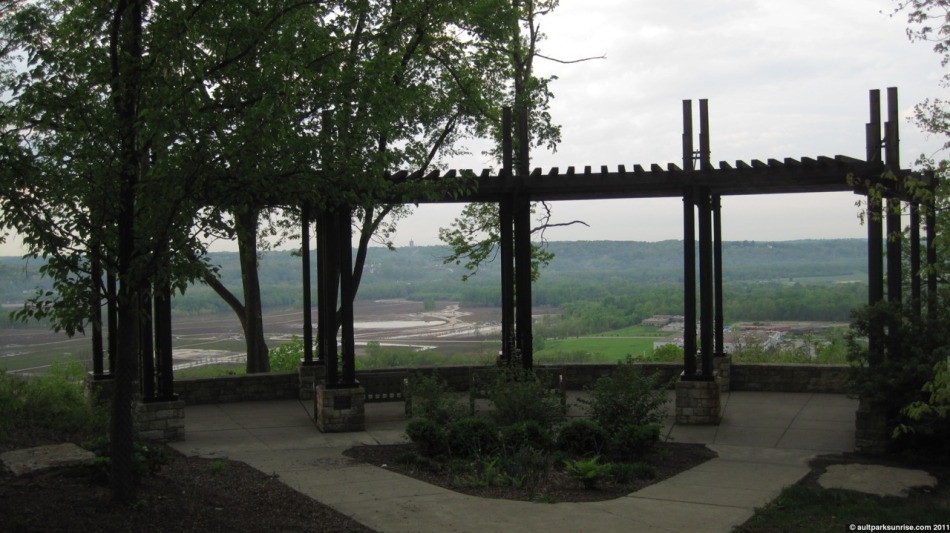 While stopping at the overlook to take the timelapse picture, I noticed that the sun was still putting on a wonderful display behind the clouds. 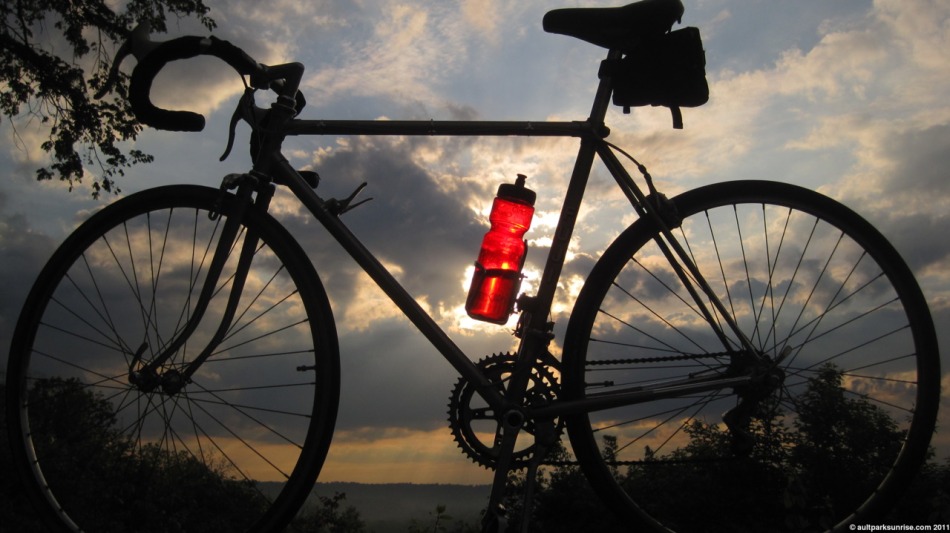 I propped my bike up onto the stone ledge and took a picture in a similar vein to to the set of pictures taken at Alms Park several weeks ago.

The red carew tower water bottle does such a good job at obscuring the sunlight from direct light. Please note – thats not a palm tree on the right 🙂 It is a strange native plant that blooms these long red hanging flower bunches and it reminds me of a tree I’ve seen growing in Brazil. It grows quickly and can get as tall as a tree, although it typically grows as a smaller bush-like plant. You can see it springing out of the edge of the local forests, hanging over sidewalks in the neighborhoods.

On the way home I stopped two times to take a picture – I couldn’t resist taking advantage of this soft morning light. All around the neighborhood I have noticed these small bushes that have started to come into bloom.

Their white flowers are bunched together in such a geometrically pleasing way. They are very young, their pedals haven’t been affected by mold, insects, or the rain storms.

Just before leaving the neighborhood I noticed the set of old tall oaks that gracefully rise up into the sky. They are from the same period as the oaks in Alms Park – wide bases and tall healthy growth. A wonderful side effect of exploring an old neighborhood.