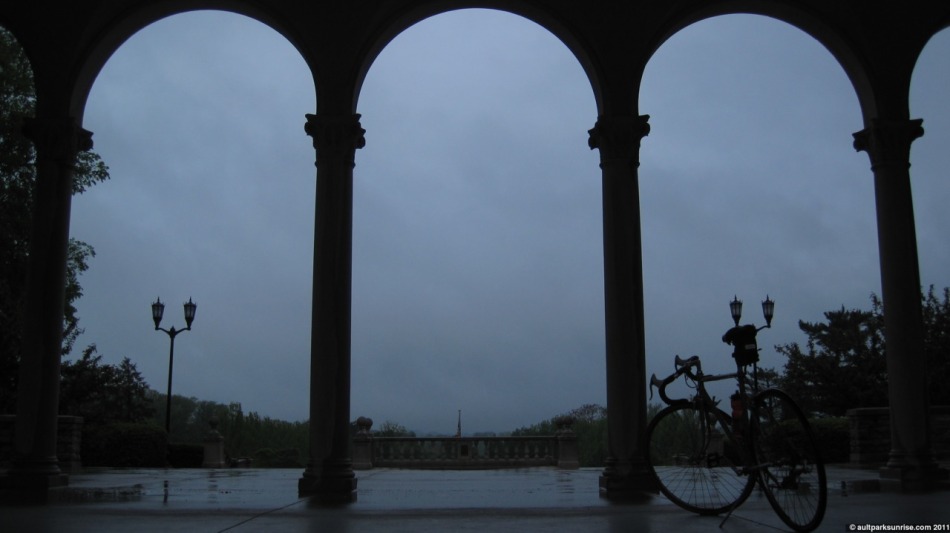 This morning was a repeat of yesterday morning but at about twice the “volume”. Spring showers with no sunrise. The rain storm that came early yesterday morning was young, having been only a few hours behind the thunder front. This morning’s rain storm, however, felt strong and confident. Thick clouds and dark skies with no thunder. The sky was so dark when I woke up that I ended up snoozing for about 15 minutes and left around sunrise time. There just isn’t much hurry to get out there into the dark wet rain. 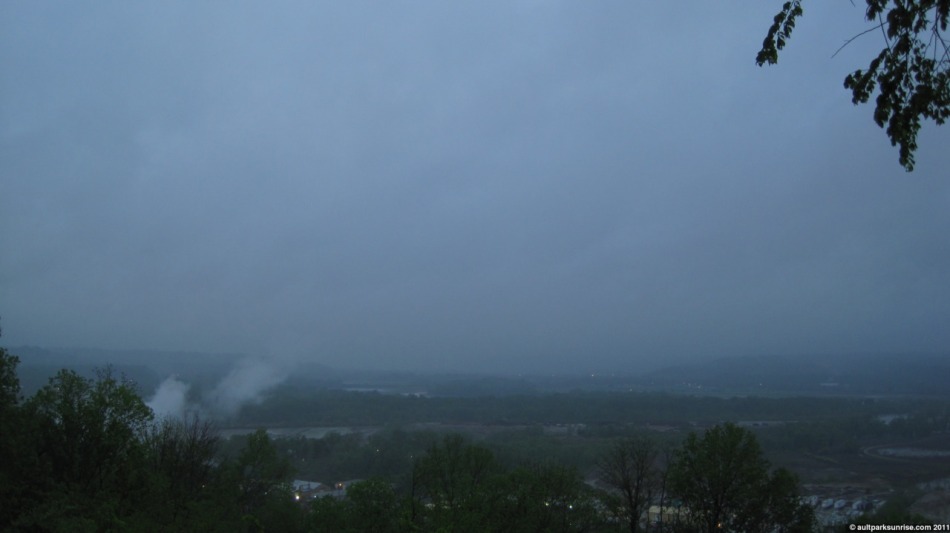 The rain was noticeably colder this morning, compared to yesterday, and the wind was making me wonder just how wet that emergency pair of gloves in my backpack is.

While yesterday morning was relatively warm with a light drizzle, this morning was chilly enough to take the euphoric edge off of my morning ride. 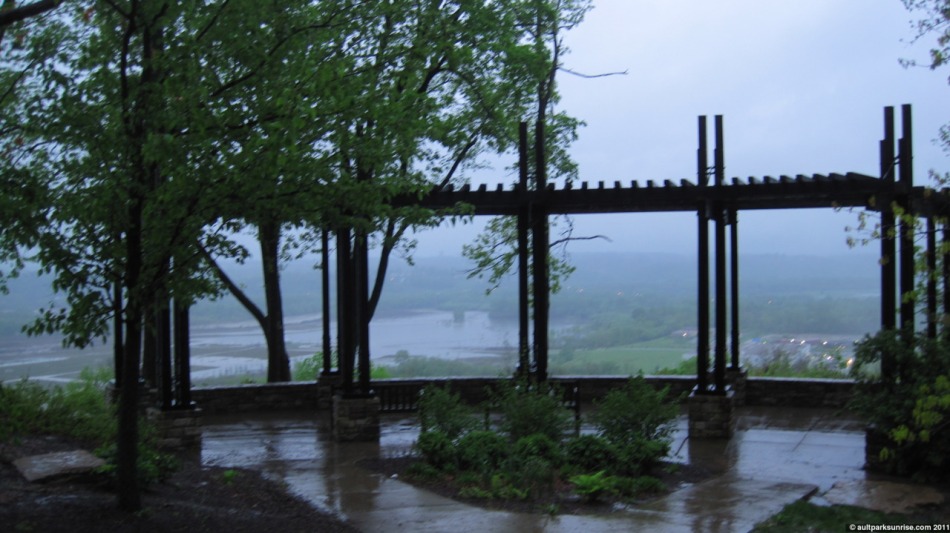 I decided to take a few pictures of the overlook and head up to the pavilion. In other words, it was a man-made shelter kind of morning. 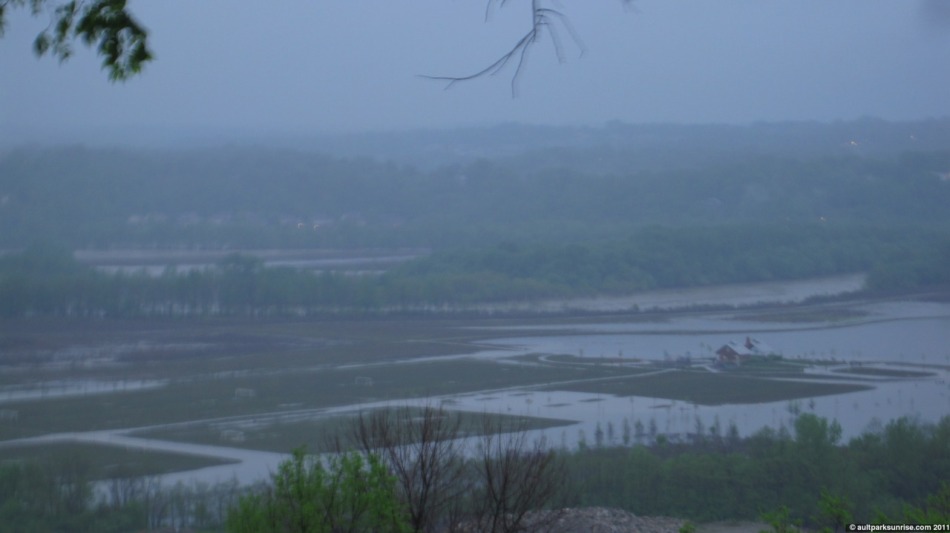 The water appears to have retreated back from the main shelter, revealing most of the prairie and some soccer fields. The rain hasn’t really let up enough to warrant that much of a fall, so I’m wondering if the city engineers have dome something to help drain the field?

The pavilion was pleasantly dry. When you’re not getting rained on, the wind doesn’t seem to be as much of a problem. I stood next to my bike and wondered what I was going to do for the next 15 minutes as I dried out. I remembered that another Cincinnati blogger, krs, had tagged me yesterday in some Ault Park pictures that he took over the last few days. They were interesting pictures because they featured one of my favorite things about the Cincinnati Parks – the heavy duty metal utilities that you find in all parks. A water fountain, a bench, and a lamp post. The pictures are taken in such a way that you can’t exactly tell the context of the surroundings. Challenge Accepted! If you’re on the front page, click to continue –>

The pictures that krs took in Ault Park:

I had some good ideas where the objects were located in the park, and I figured that while I was here with nothing to do I’d try and duplicate the pictures as a kind of photo scavenger hunt.

The water fountain was easy – even though I didn’t actually know there was one by the pavilion. Because I as doing this from memory, I didn’t know exactly how he framed the picture. I just remembered that there was a stone backdrop.

I thought that the bench picture may have been taken down by the retaining wall towards the front lawn. I passed the waterfall and noticed, for the first time, that it was turned on. A few sunrises ago I commented that there were people working on the pavilion and setting up for an event. As it turns out they were actually just working on getting the waterfall up and running! 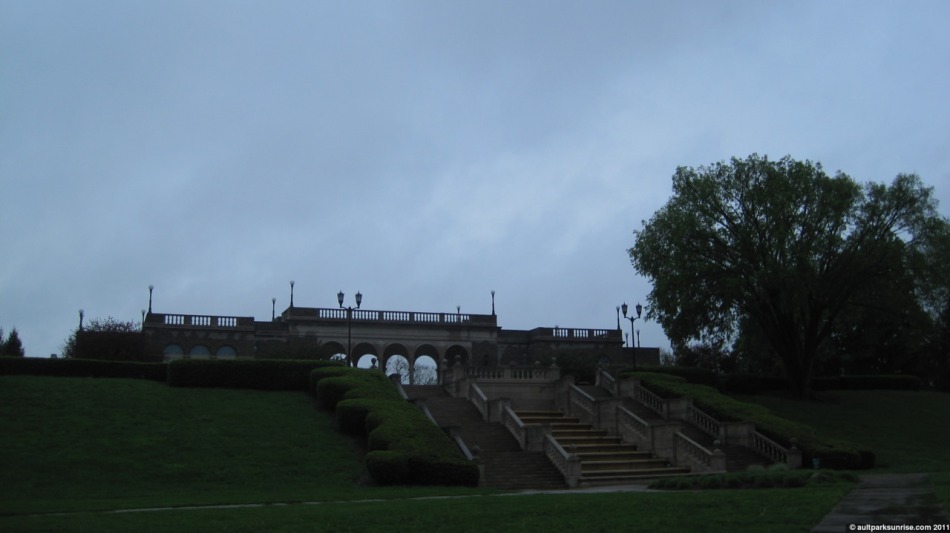 I didn’t have any luck down on the lawn, however, mostly because the benches down on the lawn are not the same heavy duty benches that are up by the pavilion. As I was looking across the lawn, I saw a family of deer sitting still, about 100 yards away, watching me. Their bright orange stood out against the dark green landscape.

Although between the misty air and rainfall I hadn’t noticed them right away. 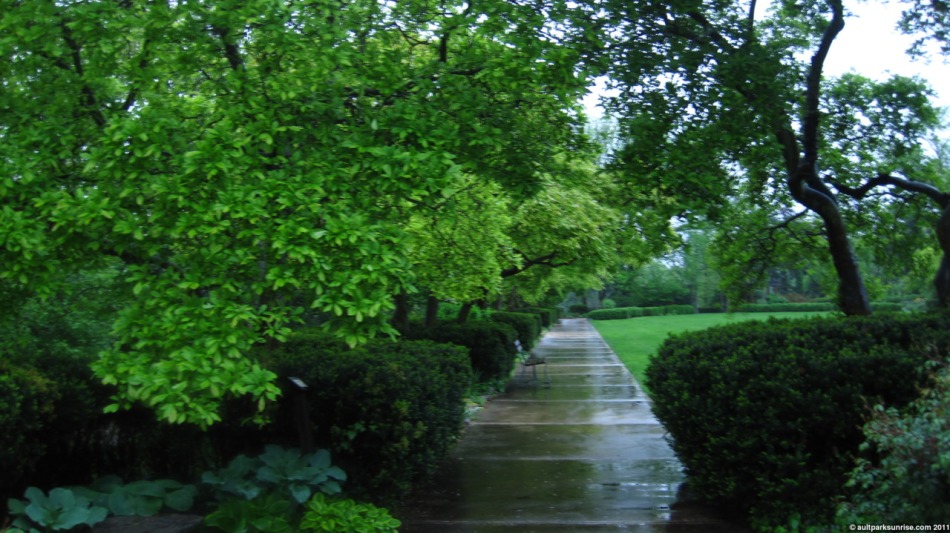 I made my way along the side lawn to try and see if I could get close. The lawn is looking healthy and flush. 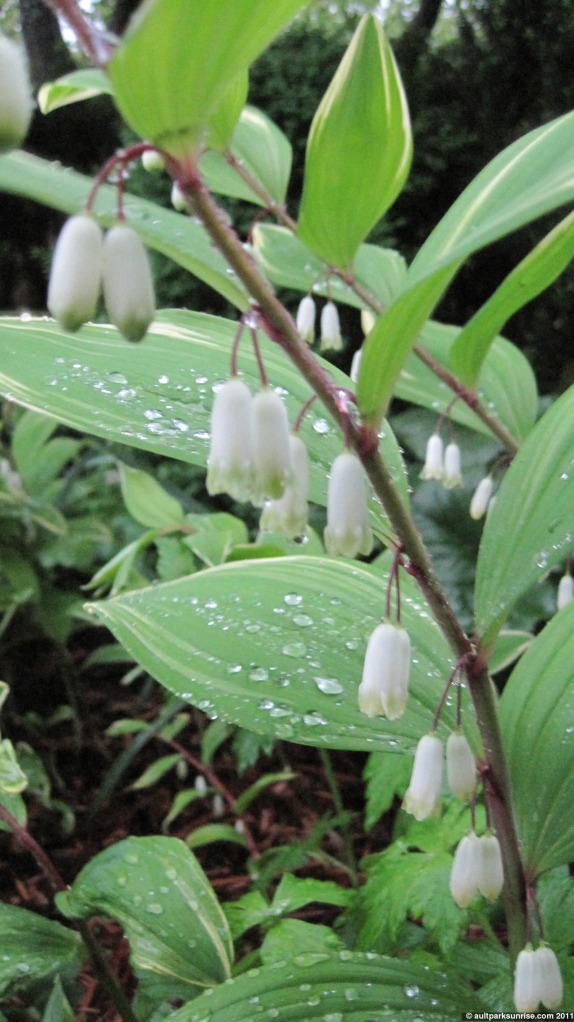 On the way I stopped to take a picture of this hanging flower. At this point it was getting harder to get non-blurry pictures as the lens continued to fog up and the atmosphere did not seem to be getting more bright.

As I turned the corner around to face where the deer were hanging out, I realized that my eyes had fooled me. You can’t tell in the picture, but this bench is relatively new and has a bright orange wooden look to it. I was duped! 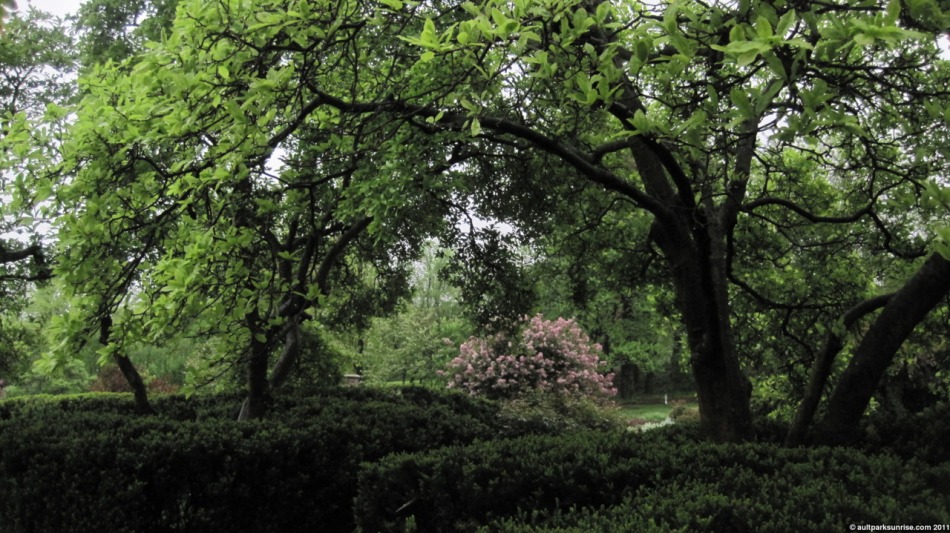 I made my way back to the pavilion to continue my search.

Around the back of the pavilion I found the two symmetrical benches. Once again – I couldn’t recall exactly, from memory, how the picture was framed. I just knew that the side of the bench was sticking out from behind the stone wall. I also knew that there was not enough information in the framing of the picture to give away the location.

I snapped my interpretation and moved on. I found that this kind of a picture was difficult for me to take. I don’t know how I would classify my “style”, whatever that means, but I generally don’t explore taking a picture where the photographed object is something like part of a park bench and a stone wall. If nothing else this excercise allowed me to appreciate a different style of taking a picture.

At this point I had noticed that there are two sets of light posts in the park. One type lives on top of the pavilion, the other down by the stairs and in the lawn. I quickly eliminated the lawn posts because they were smooth and without ridges. The lamp post from krs’ picture had some kind of features, I was sure of that. I assumed that the lamp post was also set back against stone, and I couldn’t figure out the angle to make it work. I abandoned the idea of having a stone backdrop and took a picture against the overcast sky.

At this point the camera lens was starting to be overtaken by the precipitation, so I took the clearest picture I could get and went back down to the dry shelter. I’d say that I did a good job at doing the photo hunt from memory. The only picture that doesn’t quite resemble krs’ is the final photo of the lamp post, but I can rest easy knowing I was standing in almost the same spot he would have been, so I call it a win 🙂

I took a final set of pictures across the lawn and headed home. The sky was dark and the rain, after taking a short break, was starting to pick back up.

I wasn’t going to include this picture in the posting, but I noticed some strange lighting effects. There was no one out in the park so the only thing I can come up with is that they are reflections off of the bubbles on the lens – even though the blobs show up on no other photos. If you click the above photo and zoom in, you can see three sets. One in the center behind the top of the flag pole, and one on either side by the lamp posts. Who knows?

This entry was posted on May 3, 2011 by Ault Park Sunrise. It was filed under ault park, stormy and was tagged with ault park, biking, cincinnati, Cincinnati Ohio, flowers, park benches, parks, photographs, rainstorm, spring, storm.