You can tell today is a Monday. I got all the way up to the park before I realized that I had forgotten the camera. The last time this happened, the sun rise was so spectacular that I had to make do with my camera phone. This time, however, the sky was overcast. This meant that a difference of 10 minutes didn’t really matter as much. I whipped back home, all down hill, and grabbed the camera from the table. The second ride up the hill wasn’t as hard as the first; being warmed up helps substantially when you’re on a bike.

The forecast for this week looks pretty miserable. Thunderstorms are expected for every morning until friday, when they drop their electrical charge and just become “rain storms”. This morning, however, was a great example on how not to get discouraged just because the forecast sucks. The temperature was warm, the air was thick. I actually ended up taking off my sweatshirt when I got to the overlook – it was that hot. The rain held off until just before I walked in my door (for the second time). In general, sunrise quality withstanding, it was a very promising beginning to an otherwise gloomy sunrise week. 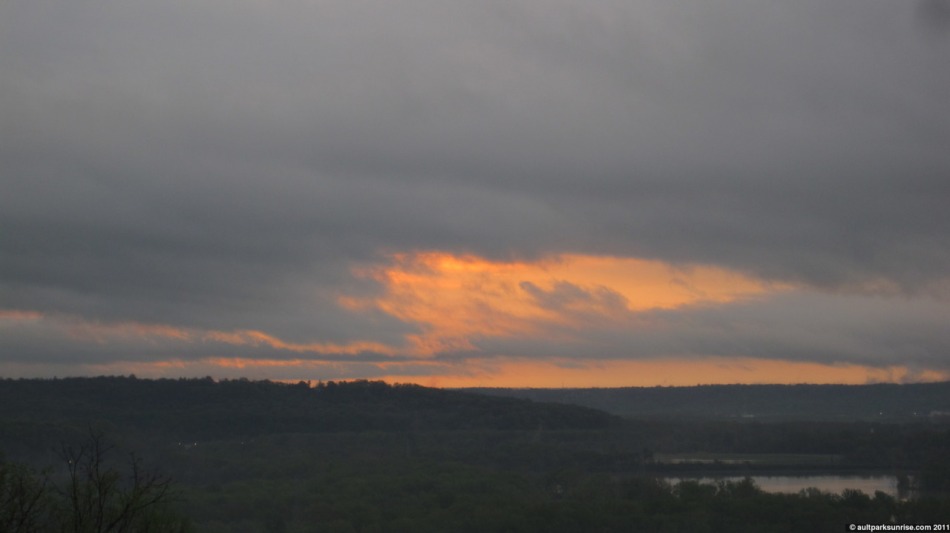 As the sun rise came up behind the eastern hills, I started to see a possible opening in the clouds. I hoped that the hole was deep enough for the sun to be able to pop through. For a few seconds it looked possible, but in the end I only got some nice orange highlights.

That’s alright though, it just might be the most colorful sunrise I get this week. 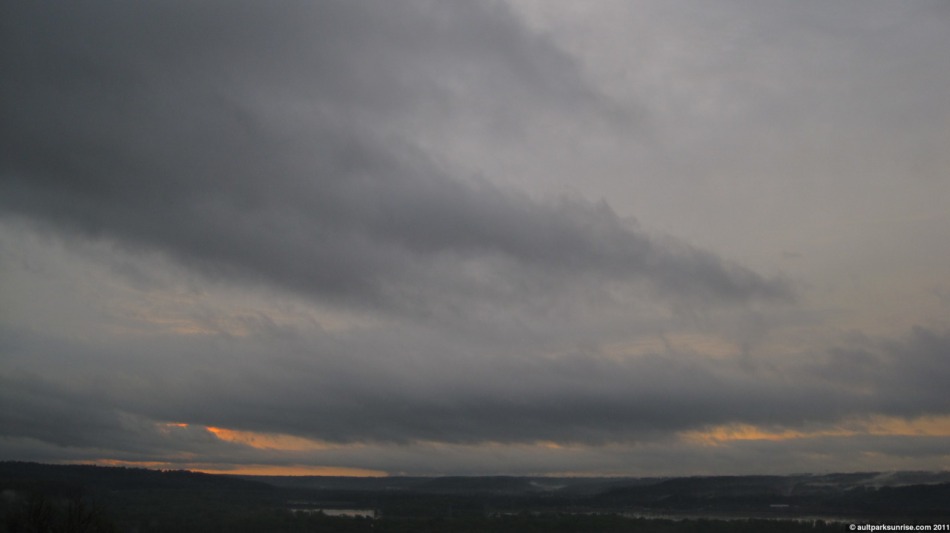 The clouds had some interesting patterns that were forming over head. The eastern front, likely having dumped its payload over night, was being pushed out by the western thunder heads.

I could see the dark front approaching from the west.

The fog was thick over the Ohio River and it was starting to creep over across Lunken Airfield. You can see a small commuter about to take off while the gettin’s good. Next to the red lights. At this point it was only a matter of time until the storm arrived to make me eat my words about the morning being pleasant and dry. 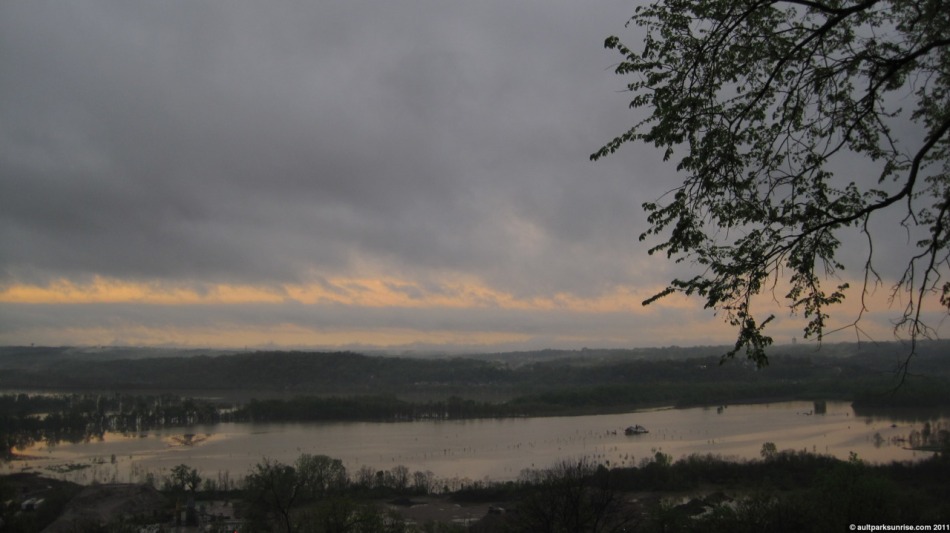 The focus of today’s sun rise, and most of the last week, has to be Armleder Park. Just when I thought it couldn’t get any worse, the park (and dog park on the western side) are looking pretty water-logged.

The water has advanced up to the center park “shelter”, and it even looks like it has crept up a foot or two. The Little Miami river has officially taken over the park. But this brings me back to the fishing theory that I touched on last week. I heard rumors that the park may have schools of giant grass carp swimming around, no doubt taking advantage of the soccer fields and prairie grass. Once the rains stop and the water recedes back into the river, I imagine that many large fish will find themselves hiding out in the “deep” part of the prairie – the small fishing pond near the soccer fields. I imagine this will be one of the best years to go pond fishing at Armleder Park. Who knows what monsters will end up taking residence in the tidal pool pond.

The river has become one with the flood plains. Even the fields in the back of the ridge are under water. The valley is having flashbacks of the massive river it used to hold.

This was a first. A huge jet took off from Lunken, definitely the biggest I’ve seen. As big as one you’d expect to travel on internationally. It seemed like a 747 class jet, as unlikely as that is. 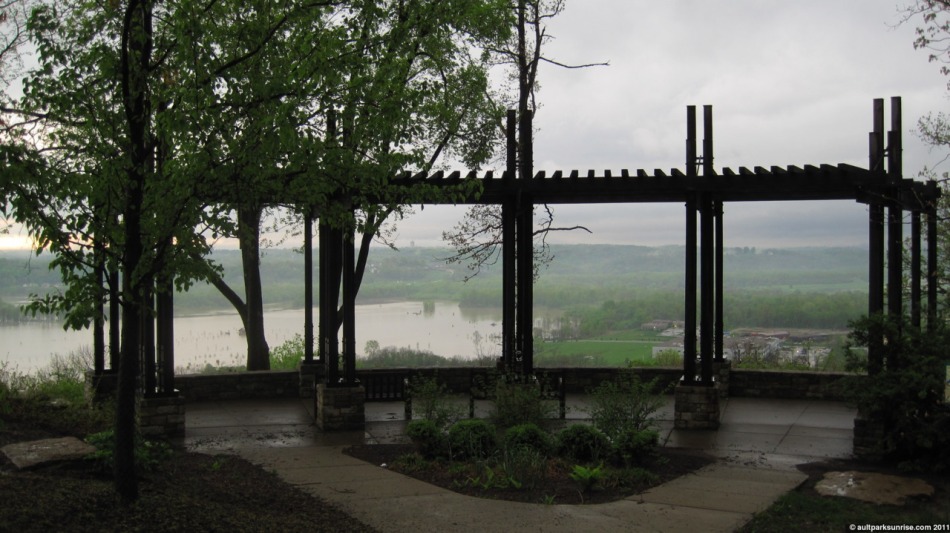 A picture for the timelapse. The flooded prarie is starting to creep up the hill to the office buildings. 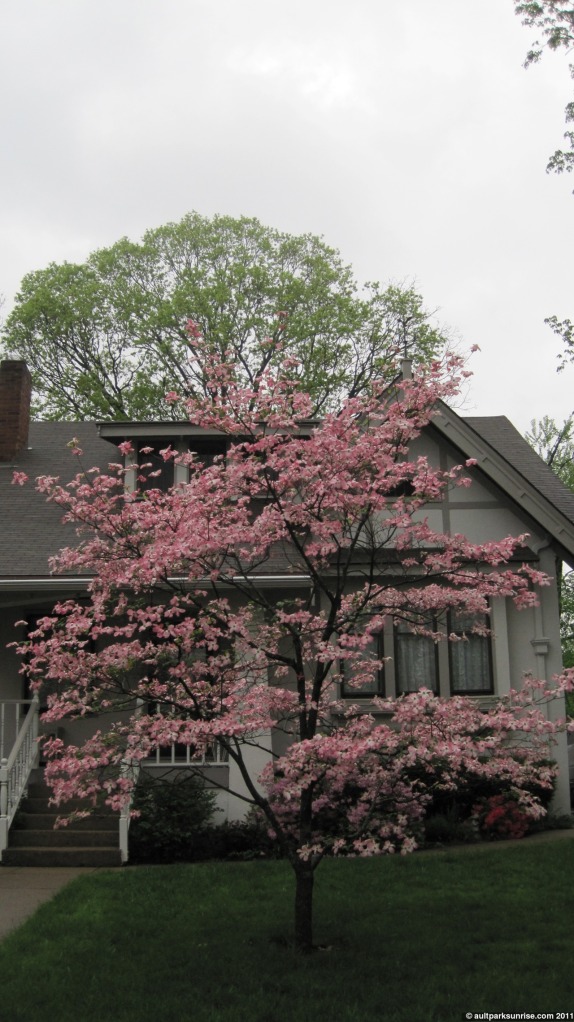 On the way home I stopped to take a picture of a tree that I have noticed in the past week. Now that the cherries and pears have dropped their blooms, the few blooming trees that are still blasting their colorful coats stand out. Most of the purple magnolias have dropped their pedals as well. But this one particular species bloomed two weeks later than the other magnolias.

Its leaves are smaller, and the branches expand in a kind of planar pattern, rather than a blooming bush-like pattern. The pink is so vibrant, especially in low light. Does anyone know what these are? I may be completely wrong, perhaps it isn’t even a magnolia. 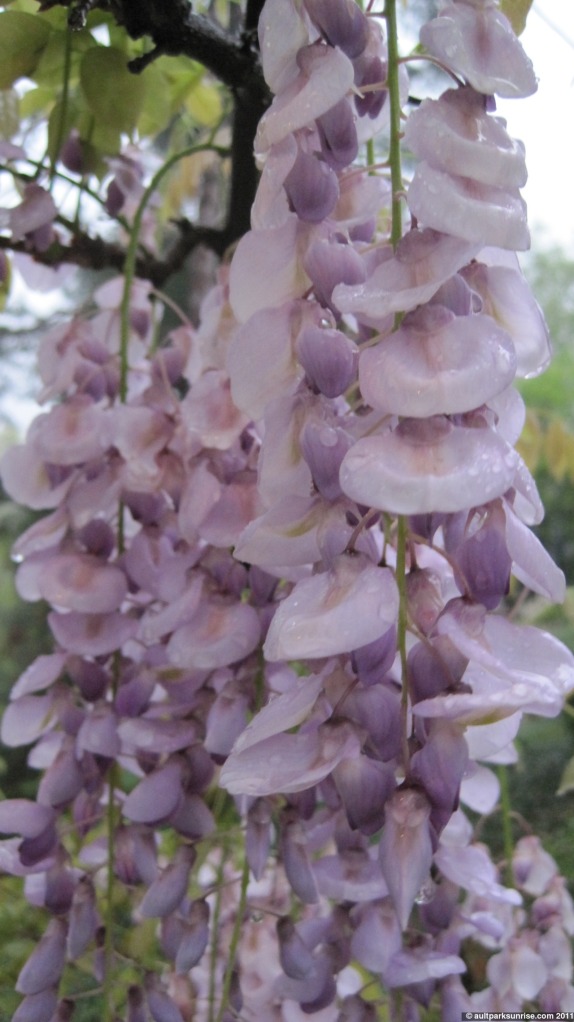 These purple hanging flowers must have bloomed in the last week. The bush is hanging across the sidewalk along one of the side-routes I take to get home. As I took this picture the rain started to pour down.

While I had the camera out I wanted to capture this wooden mushroom sculpture that always catches my eye. There are a handful of wooden sculptures in the neighborhood that appear to be carved out of the still-in-the-ground stumps of old trees. I’m not sure if this is a single hunk of stump, I got out of there before I got too soaked. Looking back on the picture, however, I think it is. You can see the ring of the original stump at the base of the mushroom.

Stats from this morning (curiously, it looks like Lunken had a power outage, the data is incomplete).
Sunrise: 6:47am EST
Visibility: 9mi
Temperature: 60F / 16C, (felt 15 degrees hotter than that with the humidity)
Sky: Overcast with cloudy holes, a western moving front
Sunrise: Muffled but orange. At least we got some color!
Bird Chatter: The cardinals were noticeably loud. There were several around dominating the spectrum, almost forcifully
People: A few runners were out taking advantage of the “dry” morning.