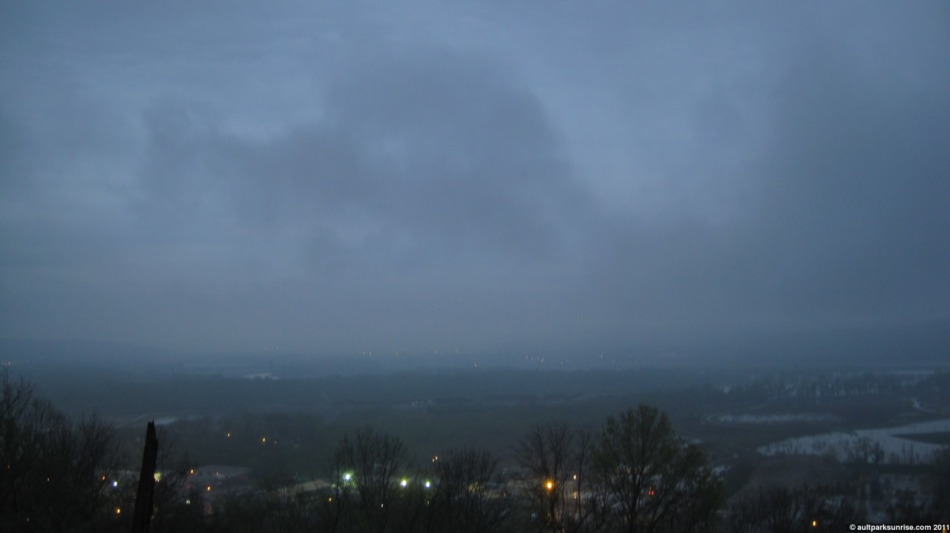 Early this morning an intense thunderstorm rolled through the area. It woke Amanda and I up several times, although I have no idea when. My phone actually rebooted in the middle of the night at some point. This is the first time I woke up on my own before sunrise without an alarm, but expecting the alarm to be functional. To me, that means that project sunrise is working. It is changing me, for the good. In the back of my mind I can jump out of sleep when the birds start chirping. Who needs an alarm clock anyway? 🙂

Now that I think about it, however, I’m not even sure it was my phone’s fault. Ive been known to do strange sleep walking activities. I never know or remember unless there is some evidence left over the next morning. Waking up in a different bed than I went to sleep in, for example. Last week I sent a “sleep text message” to my twitter account that I still haven’t exactly been able to account for. Earlier in the previous day I signed up for a twitter account. In the process you can add your cell phone number so that you can post to your account by a text message sent from your phone. They give you a randomly generated word (my word was “GO”) that you have to send from your handset to prove that you have access to it. I took care of that and moved on with my day. Sometime early the next morning, my brain floating atop a river of melatonin, I must have had a dream in which “confirming” my twitter account was high on my priority list. Your guess here is as good as mine… Apparently around 3:20am that morning (a full three hours before I actually got up, and a full three hours after I went to bed), I went into my phone, found the automated message from the twitter-bot (which meant I had to scroll down through several other messages in my inbox), and replied “go well” to it.  I didn’t find this out until later that day when I noticed there was a rogue twitter post on my profile. Why did I add the “well” to the message? I imagine it made perfect sense at the time.

Anyways, this morning was gloomy and wet, but pleasantly warm. I biked up to the overlook and was met with patches of misty fog. 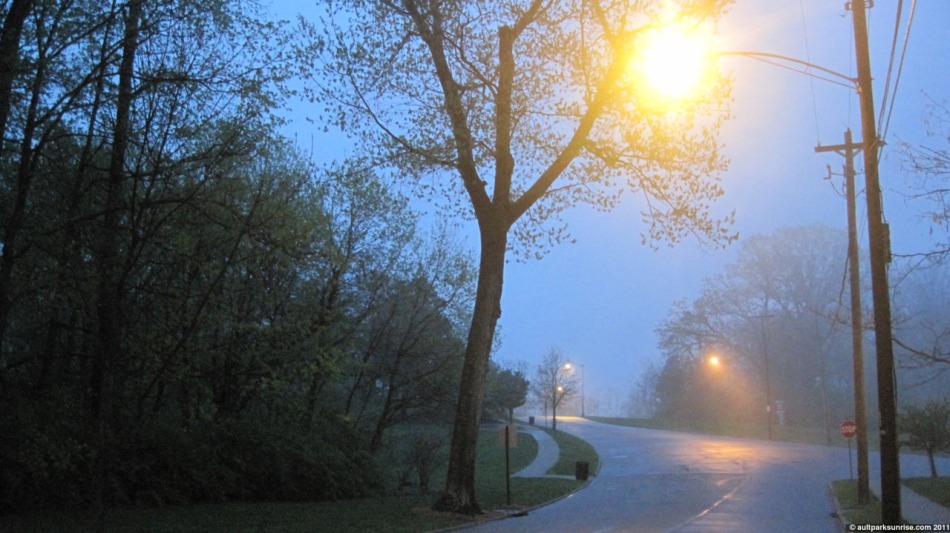 The atmosphere was a dark gray on the misty mountain top, and I was alone in the park. Even the park crew didn’t show up until later. Fortunately for me, it didn’t rain much more than a drizzle, and the haze made the lights of the incoming planes stand out nicely. 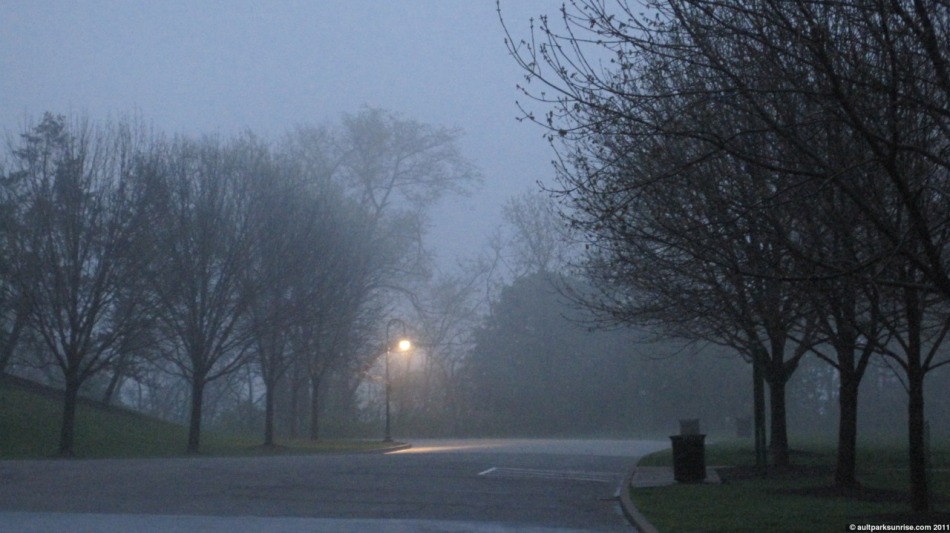 I’m not sure if the street lights are on a timer or if they use an ambient light sensor. I would think they were on a timer like the rest of the city lights, but they were on all morning (at least until 7:40am, 40 minutes after sunrise). (More after the jump) 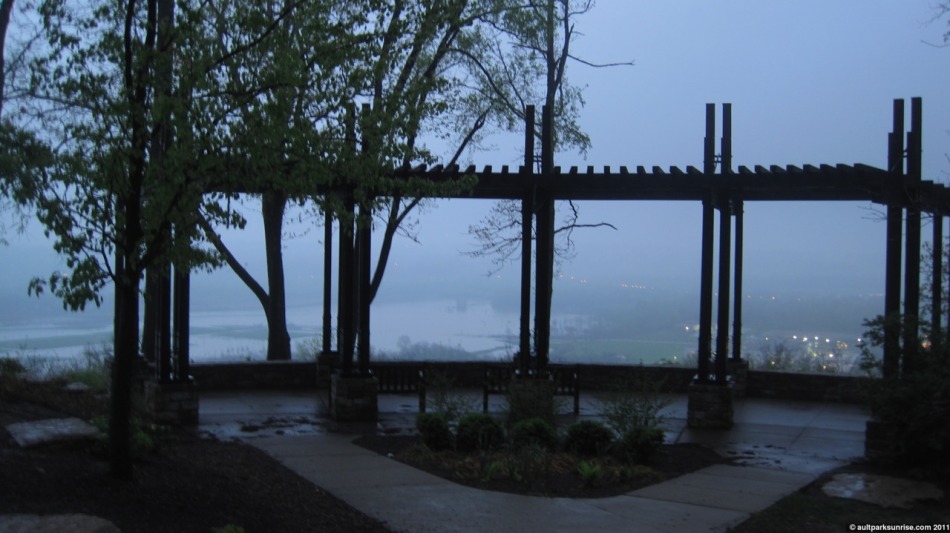 The overlook made a dark silhouette against the foggy valley. The lights down below showed through the fog, making for a slightly surreal (or at least unique) back drop.

Otto Armleder Park (and Dog Park) is definitely still under water. Not sure if it can get any worse at this point.

I also now see why people get so worked up over UFO pictures, especially back in the day before digital cameras. If I were to develop the above picture without remembering there was a plane flying over, I’d be kind of excited too.  Too bad it was just a small commuter jet. In the picture above the UFO is located in the center (click picture to enlarge)

The fog came in thick patches, with the visibility being low one minute and clear the next. The fog was blowing in from the Little Miami river valley. I can’t imagine what Alms Park looks like up above the Ohio River.

There was a young pair of squirrels who were foraging around the overlook. One of the advantagse of the overcast / fog is that you can take pictures like this that let the brown squirrels stand out against the gray.

This is one of the three fountains that sit in front of the parallel lawns that run east/west.

The wind started to pick up, and I felt that my luck was running out. The storm broke long enough to get my morning ride in, I was thinking that it was a good time to cash out. I headed back home to start the day. About 15 minutes after arriving at our apartment, an electrical storm moved through our neighborhood.  There were at least 5 blasts of lightning, without rain, that struck in our vicinity. One of them was so intense that I almost dropped the coffee cup that I was holding.  Good thing I came home when the gettin’ was good 🙂

Stats from this morning:
Sunrise: 6:54am EST
Visibility: 4mi
Temperature: 55F / 13C, not much wind at all
Sky: Overcast, slight rain, with a side of an electrical storm.
Sunrise: Non-existant!
Bird Chatter: Kind of quiet, they knew the storm was coming. Lots of squirrels taking advantage of the break in the storm
People: Not even any park crew.

This entry was posted on April 19, 2011 by Ault Park Sunrise. It was filed under ault park, sunrise and was tagged with ault park, fog, lightning, misty, rain, spring, squirrels, storm.