(Sometimes you just get lucky.  A small commuter jet coming into Lunken AND a set of Canadian geese flying north for the summer).

This morning was another beautiful day in Cincinnati. The sunrise was similar to yesterday’s: clear, vibrant, and warm.  I arrived at the overlook with 5 minutes to spare, taking time to get set up for the show. Lunken airport was fairly busy this morning, and I actually “accidentally” caught a couple of sunrise pictures with airplanes coming in on approach.

There were these thick pockets of fog scattered through the valley.  This is the first time I’ve seen these since I started this project.  Typically the fog manifests itself as a smooth mist evenly distributed through the air.  Lunken had several pockets hanging out on the runway, interestingly enough.

(More pictures after the jump)

You can see some industrial output on the bottom left of the picture. With the dew point being so low, it billowed up from the factory in a white puffy formation.  The sun has just crested above the skyline, right on schedule.

You never think to stare into the sun… but during a sunrise or sunset, those few seconds that you can see the sun come up before it gets so bright that you have to look away provide an opportunity to really “feel” the earth spinning towards the sun. If you want to throw your perception off, pretend that the sun is some giant body floating out in space, and the earth just a space ship spinning through the vacuum of space.  Yes, this is an analogy, but it is also the truth. I almost made myself dizzy trying to conceive it.

At this point I tried to take a picture of myself. I failed miserably by blocking the sun – thats was the whole point! But now that I see the silhouette, I kind of like it. What you can’t tell is that I don’t have pants on.  Kidding.

The robins were in full-on mating mode today. They were really on the prowl.  I could see the males perched in the trees, watching carefully while not making much noise. A bit later I saw a female sitting on a branch, making quiet cooing sounds.  I watched her for about 2 minutes before she took off towards the forest, blasting out a song. Immediately, and I do mean within 2 seconds, three males from the surrounding trees swooped in on her before she could make it to the tree.  The four of them tumbled into the forest.  It sounded painful. 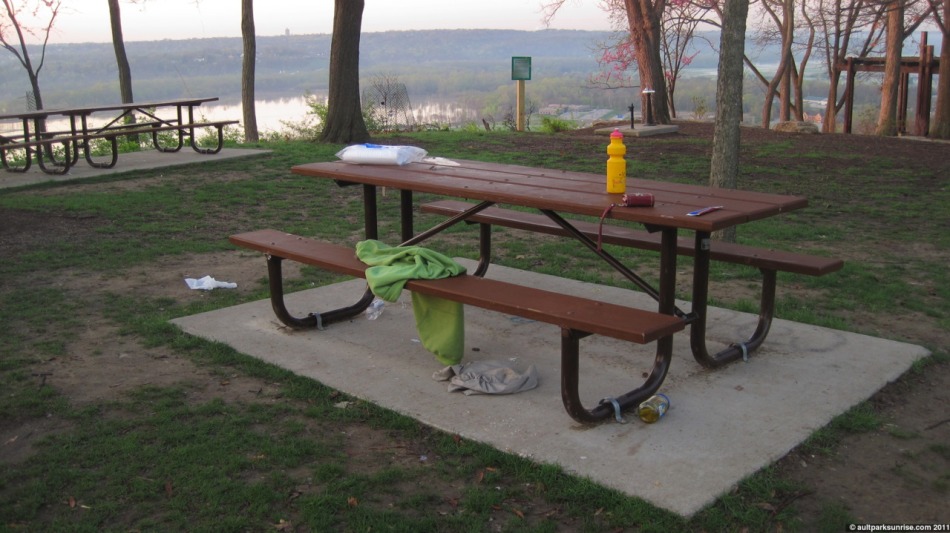 This was kind of a disturbing scene. After the sun crested I startd to notice evidence of human activity on the site.  An empty soda can here, a candy bar wrapper there, a can of lighter fluid by the grill, etc.  Then I come across this bench… whoever was here last night must have left in a hurry. There wasn’t anything in the small purse on the table, making me think it belonged to a young girl. I’d like to think that they were just sloppy, and that they weren’t suddenly abducted by aliens or something. The thing that really gets me is the can of lighter fluid by the grill. I guess the adults were as forgetful as the children… or the children love to grill. 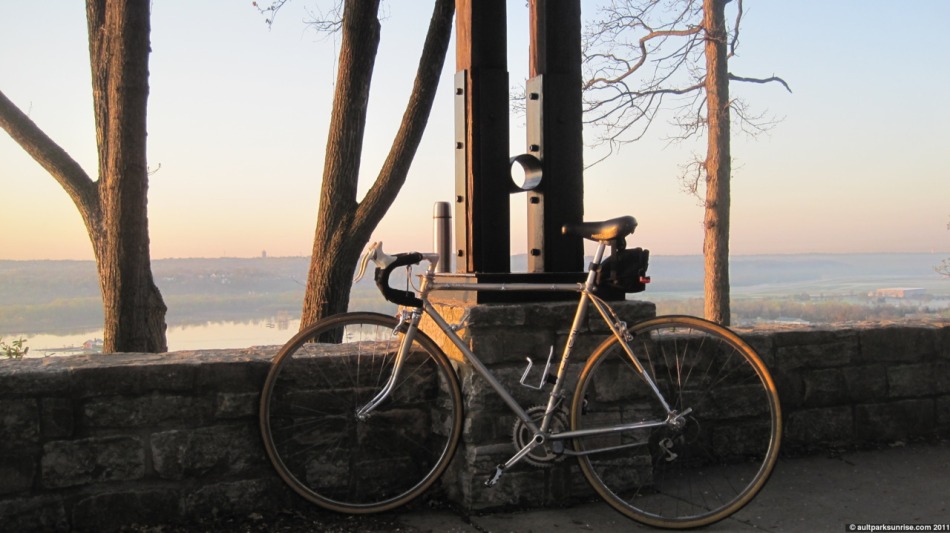 My trusty companions. The Nissan 28oz stainless steel thermos that will keep my coffee steaming hot for 12 hours and luke warm for 24, and my trusty wheels of steel (with new pedals!).  After the spill on Sunday I was hoping for the best, preparing for the worst. Not a single alignment issue or dérailleur problem.  She may weigh 14 pounds more than your modern road bike, but it is pretty hard to break a steel bike. She is a 1977 Fuji S-10S 12-speed, one of the first serious Japanese bikes to enter the US market. Sheldon Brown’s history is pretty fascinating. I got her on Craigslist. The original owner put her in storage after buying it brand new.  The owner and her fiancée bought two bikes in 1977 but he passed away soon after :(. I wonder where the sister bike is? After 30 years she sold the bike to the guy I bought it from, and he only rode her from Cincy to Columbus before selling it to me.  I didn’t know anything about the bike’s history until after I bought it.

I made my way across the lawn, exploring the eastern part of the park that I found yesterday. I wanted to find other spots to see the sunrise in case I want to switch it up a bit some day.  These benches look like they’re well suited to catch the first rays of the day. 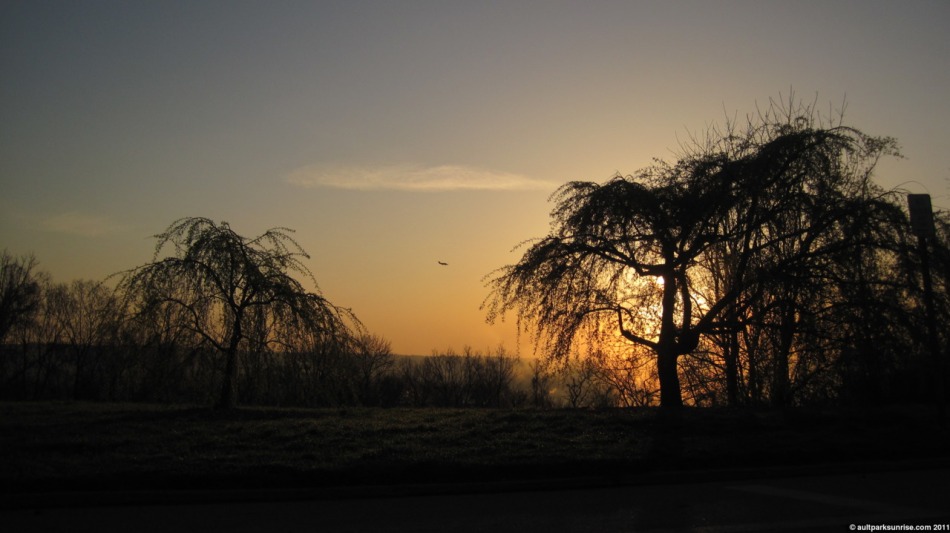 I made my way to a grassy hill close to the trail head that I popped out of yesterday. On the Ault Park map this hill is designated a “prarie”, although currently it just looks like a dead lawn.  I imagine that by mid July this will full of chest level prairie grass and all the insects and birds that come long with it.  As I took the picture, the sound from the airplane hit me – I had no idea it was coming in for landing.  Now that’s what I call lucky. (On review, one of these trees might be a redbud. Oops)

At this point I realize that the billowing white smoke coming from the factory down in the valley is starting to gain critical mass. It has begun blocking the sun and taking on a neat formation.  “Zoom in there.  OK now enhance.” 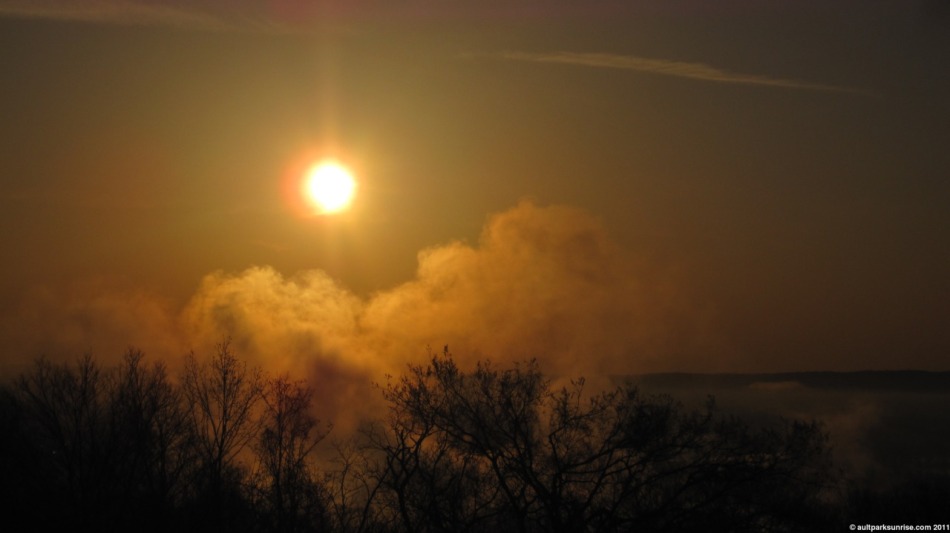 This kind of reminds me of a sunset.  Sometimes I wonder if I could tell the difference.

I took the long way home, past the eastern part of the park onto Observatory Road. Off of Observatory sits the Cincinnati Observatory. Rumor has it Mt. Lookout takes its name after this building.  After being built in 1844 and being the largest telescope in the world for several decades, it was moved to this site from Mt. Adams in 1871.  It is currently operated by the University of Cincinnati Physics Department.  I haven’t been over here this early in the morning, so I wanted to scope out a potential sunrise spot. 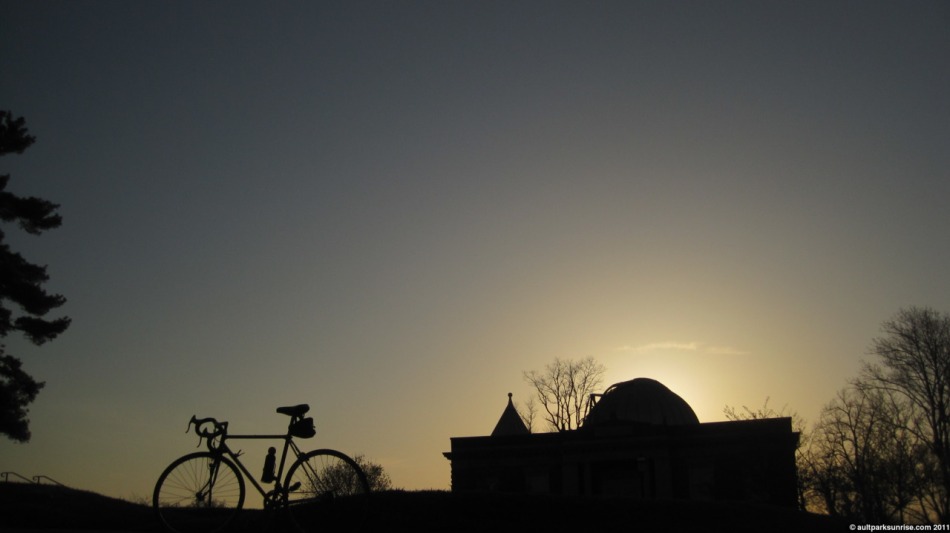 (Am I getting too carried away with getting my bike into the pictures? Maybe.)

Off to the right of the main building is the smaller annex with another telescope.  To the left of this building is a set of benches that look out into the valley. Perfect! Looks like I’ll be waking up with the observatory some day in the future.

The observatory in all its glory.

Thanks for reading, see you soon 🙂

Stats from this morning:
Sunrise: 7:03am EST
Visibility: 10mi (you can see how close the dew point and temperature were in the above link… this explains the pockets of fog)
Temperature: 42F / 5C, mild breeze
Sky: Clear and vibrant. No clouds in the eastern sky.
Sunrise: Powerful and bright. Pink Sun.
Bird Chatter: Loud and looking for mates.
People: No one!

This entry was posted on April 14, 2011 by Ault Park Sunrise. It was filed under ault park, mt. lookout, observatory, sunrise and was tagged with ault park, cincinnati, japanese maples, observatory, spring, sunrise.