Well, here we go! I’m going to try and hammer out the format of all of this as I go along.  This is going to be a wordy post, but most of the later posts will be substantially smaller.  Welcome to my project!  The purpose of this blog, at least right now, is to document my ongoing attempt to wake up with the sun every day for the next few months (starting today), brew a thermos of coffee, grab my notebook (the analog kind), hop on my bike, and make the thigh-burning, wheeze-inducing, 12 minute trip up to the top of Ault Park (did I mention I’m miserably out of shape?).  This will of course involve me getting up 2 minutes earlier every day until the middle week of June, at which point the sun rise time will hold steady for a few days (at 6:11am EST) before starting its retreat back to more sane times.  One of the hardest things for me to do is get up early.  I realized something recently, and that is that I never regret when I actually do get up and active before 8:00am.  So thats what I’m going to try and do.  Start off every day with an accomplishment of great magnitude.  It is all down hill from there!

If you’re more curious about why on earth I’d do this (even I think it is crazy), I’ve got some ideas written out in the manifesto (which will probably be changing daily).  I’ll also be exploring various other areas around eastern Cincinnati (at least as far as I can get on my bike), including Ault and Alms park, Armletter Park, the Cincinnati Observatory, Lunken Airfield, East End and down by the Ohio River, the marina / boat club, and who knows where else.  I’ll probably take a break on the weekends, but I’ve also found that early Saturday mornings offer some of the best time to explore on a bike without having to worry about traffic.  Along the way I hope to find myself becoming more proficient at writing, having more productive and inspired days, and discover more amazing things about the history of the area I live in.  There are so many markers, plaques, cornerstones, and ruins hidden away in the local forest from the late 1800s and early 1900s that I’m sure I can only remember a small percentage of them off the top of my head. I also have a lot of pictures from the last two years of exploring the area (and finding those hidden ruins, markers, etc), so I’ll throw those up on here in time.  I’m definitely going to be making a post for every sunrise I see (daily if I keep up the motivation), and hopefully I’ll find a few other pictures along the way that I’d like to share.  This project doesn’t just represent a new way of looking at my life for the next two months, or as a way to savor every detail out of the early hours of the day, but it also serves as a way for me to create a historical log, with pictures, that I can look back on for the rest of my life and say “Hell yeah, I’m really glad I did that”.

So now it is official; I decided to make today the official start of the project!  I got in late last night (I was at the reds game, we won!) and grudgingly decided to get my butt out of bed at 6:30am this morning.  It was pleasantly warm out, probably a good 15 degrees (F) warmer than a few days ago when I did my second morning “test run” to Ault Park.  The most surprising thing to me was clear the sky was, and how that affected the lighting around me.  There were very few clouds in the sky which meant that I could see the sun crest over the ridge line.  Earlier in the week it was cloudy after a storm, which meant that I had to wait about 10 minutes to really see the sunrise (and I couldn’t exactly tell where the sun was).  I’m hoping to see another sunrise like that in the coming weeks, it was absolutely beautiful and didn’t really peak until the sun found a break in the clouds at about 15 minutes after sunrise.

Here is a picture of the Heekin Overlook, where I will be spending a majority of my mornings waiting on the sun.  I don’t want to talk too much about it yet, I have to save some information for future posts! 🙂

More pictures after the jump.

I drank my morning coffee, took some pictures, and listened to the birds waking up.  The birds really are fascinating to listen to.  Part of the purpose behind this project (among the many) is to learn how to pay more attention to the world around me.  When do the birds start chirping? When do they stop? Do they chirp all day? One thing I’ve learned is that the birds are really good at letting each other know when the sun is about to come up.  I think they probably start chirping somewhere between Nautical Twilight and Civil Twilight (or 1 hour to half hour before sun rise).  They probably know when the sun is coming because the sky gets surprisingly light before the sun even comes up.  This is something I had forgotten about until today.

Speaking of the sunrise, it is worth noting that I almost missed it! I was “2 minutes” late by my clock and I happened to catch it just as it was rising above the Little Miami river valley.  A lesson learned… being punctual is even more important when the sky is clear of clouds!

Lunken Airport is visible very clearly to the West.  I caught one of the early commuters coming in on business.  You can see the Little Miami river through the trees in Armleder Park.  The river is still kind of high after the recent flooding, but it is receding back to “normal” levels.

After I finished my coffee and planned out my day in my trusty pocket agenda (all before 7:45am!), I took advantage of the perfect morning light to capture some of the blooming trees in Ault Park.  I’m kind of obsessed right now with the blooming flowers (probably because they came up so suddenly a few days ago, and will be gone in a couple weeks), but I’ll save that for another day.  I also skipped around, finding other spots in the park that would be strategic to see the sun rise from, before taking a different route home.  If I’m going to see 40 of them, I’ll have to change it up a bit. 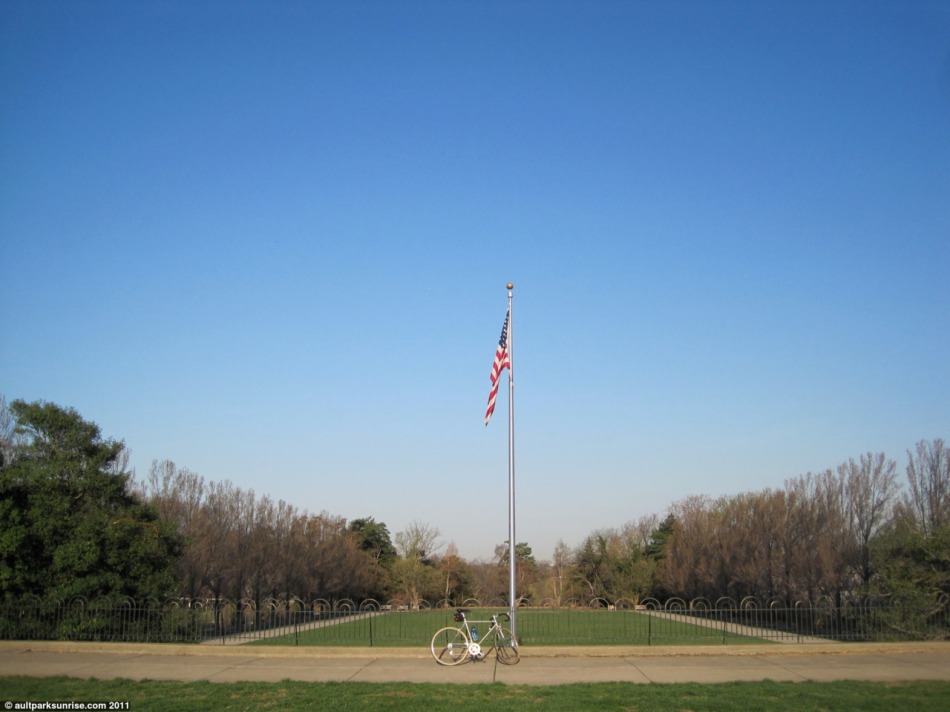 As I was looking around, I noticed that there was some nice symmetry going on with the lawn and flagpole.  Another reason I’m doing this project is so that I have a personal documentation of the season change.  I thought it would be a neat idea to take pictures of the park throughout the season and over time I’ll be able to watch the trees and flowers come back to life.  Often this will require taking pictures of things that seem boring and ordinary at the time, but in 2 months from now will serve as an excellent reference.  It’ll be interesting to see what the trees around the lawn will look like once they get their summer coats on 🙂

Stats from this morning:
Sunrise: 7:14pm EST
Visibility: 10mi
Temperature: 40F / 4C, no wind that I noticed
Sky: Clear for the most part
Sunrise: Immediate, vibrant, and warm.  Without clouds in the sky, I could see the sun easily.
Bird Chatter: Medium.  Lots of action.  Still can’t recognize them individually, but I did see several cardinals and wrens.  Lots of squirrels out, too.
People: Low volume.  I ran into a single other person about 20 minutes after sunrise, and a handful of park crew.

This entry was posted on April 7, 2011 by Ault Park Sunrise. It was filed under ault park, sunrise and was tagged with aultpark, cincinnati, nature, parks, spring, sunrise.